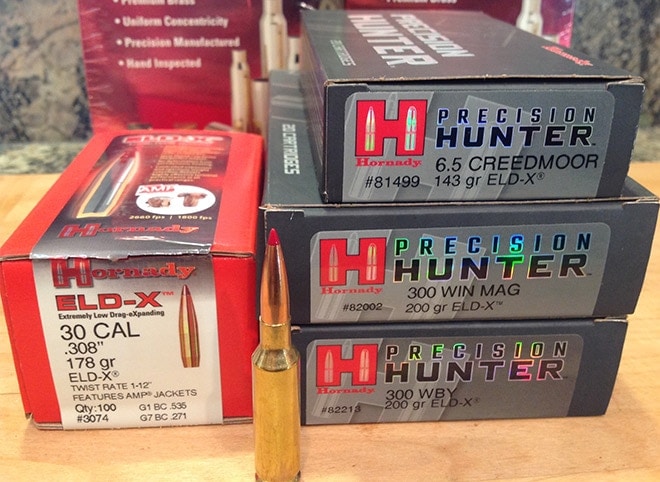 A selection of Precision Hunter ammo and ELDx bullets, with a factory 6.5 Creedmoor round. (Photo: Kristin Alberts)

“Innovation” and “performance” are the names of the game with ammunition manufacturers these days.  With new introductions in rifle bullet types and lines from Sig Sauer, Browning, Winchester, Federal, and Nosler, you couldn’t just expect powerhouse Hornady to sit back in the weeds, now could you?  Oh no — in fact, Hornady led the way in 2016-2017 innovation first with their ELDx bullets and then the Precision Hunter ammunition.

Whether or not you bleed Hornady red, here’s why reloaders and hunters need to know about it. 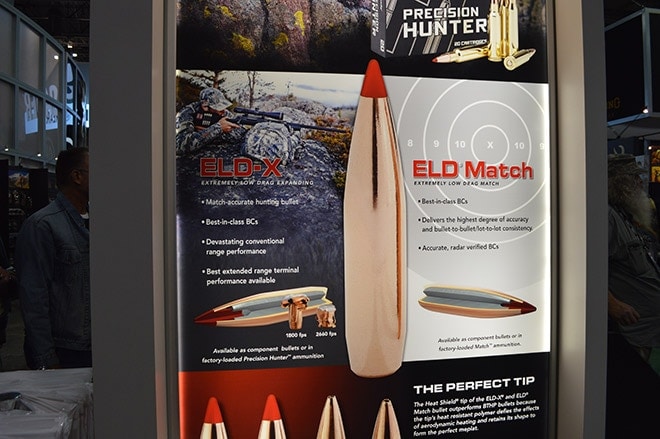 Hornady’s intro board for the line at SHOT 2017. (Photo: Kristin Alberts)

Let’s start with a breakdown of the name: Extremely Low Drag eXpanding.  The moniker means “extend your range and never compromise at any distance.”  This new polymer-tipped bullet is advertised as a match accurate, technologically advanced, all range hunting tip.  ELD-X bullets are considered “heavy caliber” and are also touted to have the highest-in-class ballistic coefficients (BC) while maintaining controlled expansion throughout a gamut of hunting ranges.

Hornady engineers saw a problem with commonly used polymer tips in high BC bullets melting and deforming in flight.  Though this effect is likely negligible at shorter ranges and with conventional hunting ammo, aerodynamic heating has been shown to reduce the BC and have a significant effect on accuracy at ranges greater than 400 yards.  Their answer?  Hornady found and developed a heat-resistant polymer they now call the Heat Shield meplat. 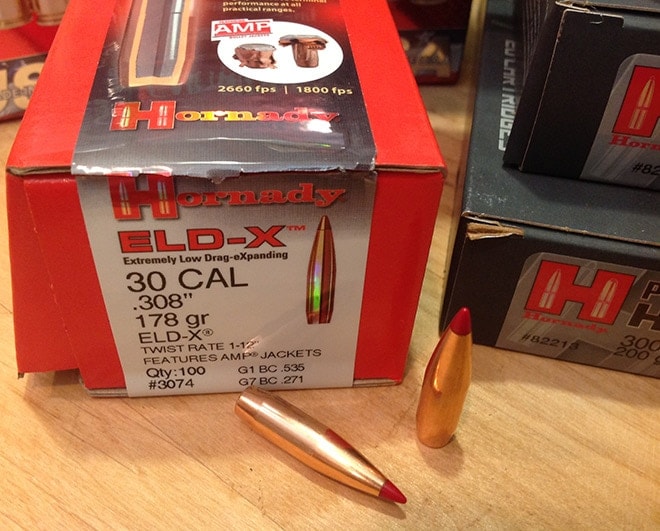 Hornady’s ELDx bullets are offered in a wide variety of bullet diameters for most popular longer-range hunting calibers, all in weights with high ballistic coefficients. (Photo: Kristin Alberts)

What does this mean for you, the hunter, in the field?  At more common ranges of 0-399 yards, an ELD-X bullet is designed to expand throughout its penetration path.  On impact, the thin nose of the bullet peels back until it reaches the InterLock ring holding the core and jacket together.  The remaining bulk of the bullet expands for lethal results on the desired game.

Long range hunters, many spending beaucoup amounts of time and money to chase faraway game, will like to know that at ranges greater than 400 yards, the Heat Shield tip is intended not only to maintain its full shape in flight but then to drive backward into the nose of the bullet, beginning expansion.  The end result should be a neat and large mushroom with high 50-60% weight retention, deep penetration, and large wound cavities. 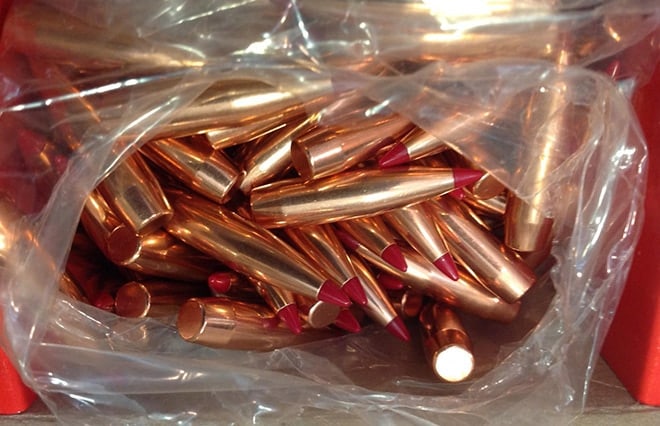 If reloading is your game, ELD-X bullet offerings have expanded in 2017 to include:

If you want to get into even more numbers, graphs, BC’s and the scientific whys behind the Heat Shield and ELD-X, go here.

Hornady’s Precision Hunter ammunition, introduced in 2016 and expanding vastly in 2017, is the natural extension of the ELD-X bullet family.  The factory ammunition is driven by two factors: accuracy and terminal performance.  What you get in those sharp-looking matte black boxes are match-accurate hunting loads that Hornady’s engineers have worked up for the caliber’s greatest ballistic potential. 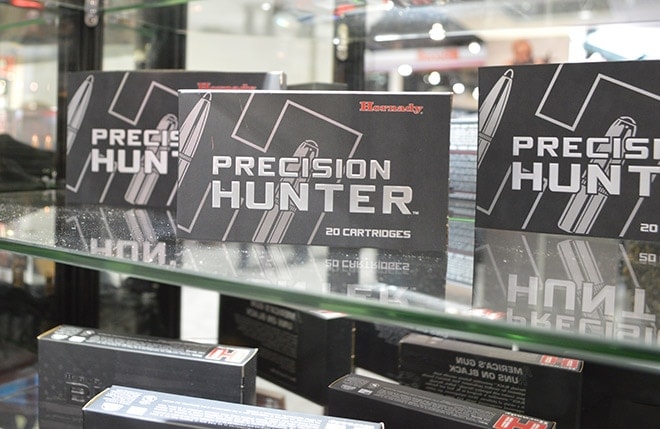 The propellants, proprietary of course, are listed as “clean burning and loaded to uniform capacity for consistent shot to shot results regardless of temperature.” We all know that hardcore hunters are out in the most extreme weather and temperature conditions — we need a bullet and load that will perform when that one shot counts the most and this is what Hornady’s Precision Hunter promises.  The Precision Hunter line now includes offerings for some of the most popular big game calibers with bullet weights the company considers at the top of the accuracy-terminal performance chart. 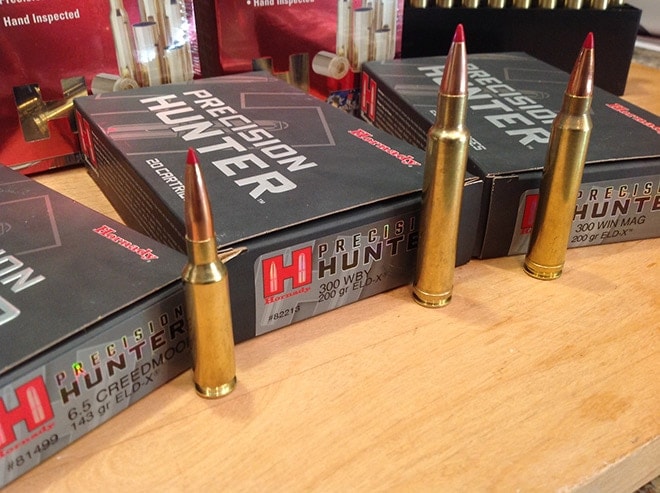 Clearly, there’s a larger selection of bullet weights and options if you choose the Precision Hunter ammunition than just the bullets at this point.  Yes, the ammo is pricey, but start shopping around for match grade, long-range hunting ammunition and things will come into perspective.  If you want to save some money or just prefer to custom tailor your own loads, the ELD-X bullets are well worth a try. 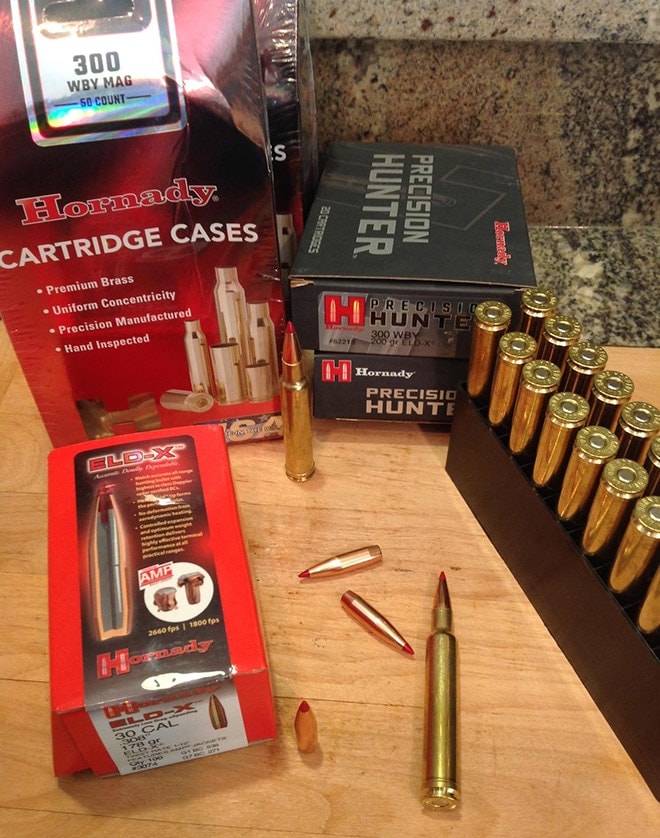 We loaded up some .300 Weatherby Mag with the ELD-X bullets in Hornady brass with exceptional results. They are easy to load and performed to book specs. The bullet works differently at high velocity versus lower velocities but the end result should both be a high weight retention mushroom with a dead animal, meat in the freezer, and perhaps even a mount for the wall at any range.  And for the serious hunter, pre-made Precision Hunter ammunition is a ready companion for bigger game, longer rangers.

We’ve had the pleasure of using both .300 Win Mag and .300 Weatherby Magnum ELD-X bullets and factory ready Precision Hunter ammo on both long range whitetail and bigger western game with exceptional results.  Even if you don’t intend to take the ammo afield, the ELD-X line offers very formidable long-range target options.

Whether you’re a reloader, hunter, or student of ballistics, the ELDx family of bullet and Precision Hunter ammunition is a unique new offering well worth a try.  Hunters who relish long distance shots but who don’t reload would be remiss not to try the Precision Hunter ammo in the field.  A match accurate, innovative, all-range hunting ammo?  I’m ready to load up another mag.