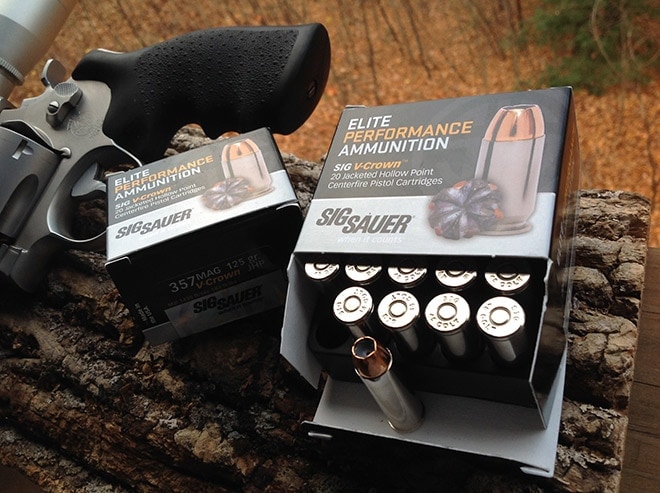 One of the biggest names in the world of all things semi-auto pistols and tactical has expanded their new ammunition lineup to include hunters and wheelgunners.  You may have heard of Sig Sauer’s V-Crown pistol ammo, but here’s why you need to know about their Elite Performance V-Crown revolver rounds. 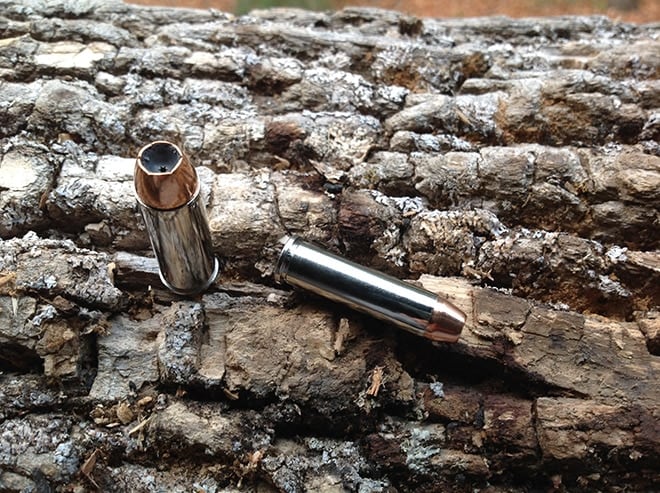 As part of a large expansion from a firearms-centric company, Sig hired industry leaders in a number of fields, did research into what the market needed, and opened new divisions in manufacturing ammunition, optics, holsters, and apparel.   While the optics have been gathering the most attention, the new-for-2016 ammunition lines are now reaching the masses.

Though the full ammunition lineups include full metal jacket options in most calibers, it’s the Sig V-Crown that is the star.  As Sig is certainly still geared toward semi-auto pistol shooters, tactical types, and home defense, their revolver rounds are flying way under the radar.  Best of all, the ammo is made in the USA.

The science behind all the Sig ammo, especially the V-Crown rounds, focuses on three major things: weight retention, energy transfer, and controlled expansion.  Though this is a fairly new offering, Sig has covered the most popular of the caliber bases in wheel gun ammunition:

We had the pleasure of firing three calibers of Sig’s V-Crown revolver ammo: .38 SPL+P, .357 Magnum, and .45 Colt.  Packaging is clean and classy with predominantly black and silver 20 round boxes.

What we found was that the ammo is not only geared toward defense or for backup-guns for hikers, but it is also suitable for hunters.  The .357 Mag’s got airtime through our S&W Combat Magnum and shot like a dream, just like the gun.  Accuracy was exceptional off bags and we’d feel confident with this as a hunting load for whitetails.  Just for kicks, we split time shooting the .45 Colts from a Taurus Judge and a Henry Big Boy Steel.  The rounds really excelled in the Judge, and would be a nice meeting for both personal defense and bear backups for this fall’s hunting seasons.  The rounds worked just fine in the Henry as well, no doubt with at least a slight increase in velocities through the rifle length barrel, though we did not run the ammo through a chrony.

Again, the V-Crown 45 Colts grouped very well through both guns from the bench, more than adequate for taking down whitetails, or even larger game.  While the .38’s are too light for the types of hunting we partake, we did like the accuracy and performance as a defense round out of a S&W Airweight.  Being +P rated, the recoil makes the small gun quite a handful, yet manageable and stout as a carry gun.  As is expected, Sig’s V-Crown Revolver ammo reliability was 100% across the board.  Penetration testing for all three calibers was right on par with the other big brand names jacketed hollow points.

What appears to be nickel plated brass on the V-Crown rounds is what Sig calls “Ducta-Bright 7A coated brass cases.” All we know is they don’t take much cleaning before heading for the reloading bench.  Both the .38 Special and the .357 Magnum rounds are also available in matching-grain FMJ budget boxes making for ideal practice ammo; however, we hope to see like FMJ bullets offered in the other revolver rounds as well. 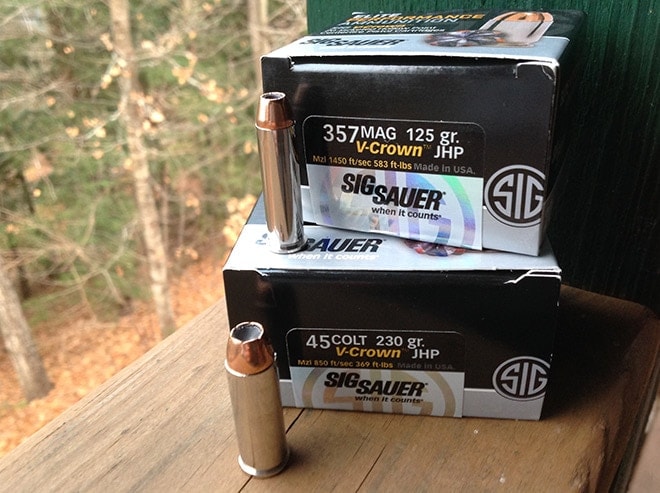 All in all, our time with Sig Sauer V-Crown revolver ammunition was a success.  The rounds performed well and are able to serve double-duty as defense and hunting rounds.  Accuracy was as good or better than comparable ammunition at a lower price point, so it looks like Sig is onto something with their new product lines.