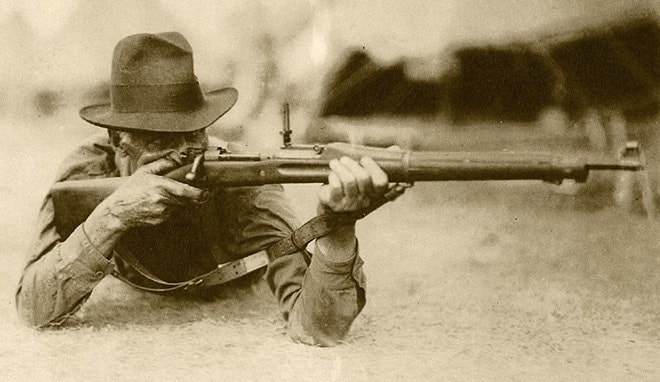 There is a trend that has been going on for the last decade or so — stripping new rifles of any vestige of an open sight, making the only choice to mount an optic. So, are the traditional open sights truly dead or still a worthy alternative to glass?

Many of us who started shooting 20 years or more ago found open sights to be commonplace. When I started hunting with blackpowder rifles, the laws at that time allowed only percussion or flintlock style guns, open sights and the old patched round ball. No scopes or even inline rifles were allowed. Now of course, the rules have changed, but I find myself still using the same type of guns I started with (though I have ditched the patched round balls in favor of conical bullets because they’re more effective). Still, I favor open sights and I have taken deer at some pretty long distances with them. 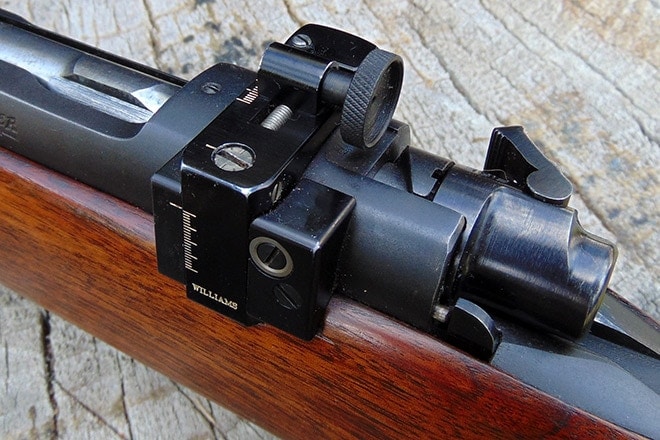 Receiver sights like this one from Williams are still popular to this day for hunting in thick brush and at close range. (Photo: David LaPell)

Now, I don’t think I’m special, which makes me wonder why so many gun manufacturers are leaving off open sights on new hunting rifles, especially guns for big game? One reason of course could be cost — most makers may reason that in some calibers no one is going to want to use open sights anyway so why not save the labor. I accept that, however I think it’s a mistake to assume that a shooter can’t be accurate with open sights out to surprising far distances. Additionally, while I do know that having a scope is more useful for bringing the target into focus at longer ranges, it doesn’t mean that open sights don’t have their uses and in some cases advantages to the hunter.

If you have ever hunted in thick brush where your range is already limited, having a scope on a hunting rifle can actually be a hindrance. I’ve hunted in many spots where if you see a deer you might only have a few seconds to get on target and take a shot before it is gone again, lost amongst the trees and brush.

Likewise, there have been many cases where shooters with open sights have proven their effectiveness, especially in places where a scope might seem to be more practical. During the Winter War between Finland and the Soviet Union, Finnish sniper Simo Hayha scored 505 confirmed kills, most with his Finnish M/28-30 Mosin-Nagant variant that did not have a scope mounted. Hayha said in later interviews that he didn’t want to have to raise his head any more than he had to, exposing himself to the enemy by having to sight through a scope. Also, the frigid temperatures could play havoc with the optics of the day. 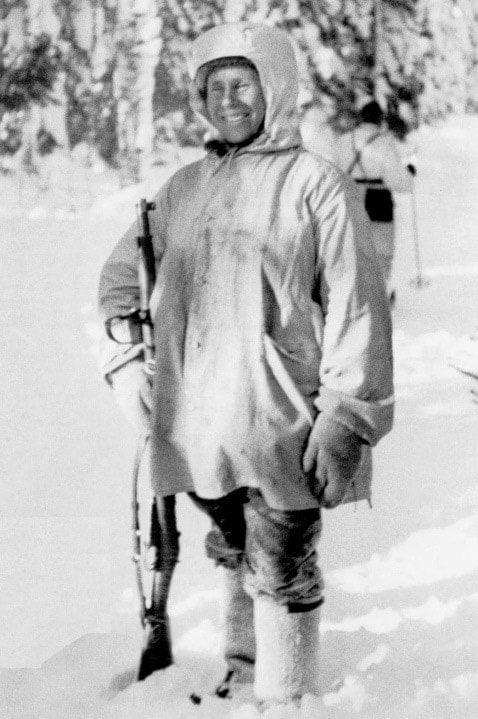 Most of Hayha’s kills were scored at around the 200-yard mark. He stated that he preferred to sight his rifle in at 150 meters and would shoot for the middle of the target.

While I certainly would never compare myself to the likes of Simo Hayha, his record is extraordinary (especially when you consider that he did all of this shooting within a short 3-month period before he was seriously wounded). It is also important to remember that Hayha was a lifelong hunter and his favorite quarry were foxes, a small and fast animal that can be difficult to get into range of open sights.

Closer to home, there is the seldom told story of the Legend of Camp Perry, George Farr and his record that still stands today. In 1921, 62-year old George Farr was making his first attempt at shooting at the 1,000 yard line at Camp Perry, Ohio. His day was not going well, the rifle he had shot before could not hold a zero, so he drew a replacement 1903 Springfield .30-06 that he had never been fired and was still wearing its original open sights. Farr was also using government issue ammunition, not the commercial grade loads that other competitors were shooting.

Most shooters never gave Farr a second glance when he began shooting late in the afternoon. After his first sight in shot, Farr shot a consecutive 71 bullseyes, putting his government issue ammo into that 36-inch target at 1,000 yards with the open sights of a rifle he had not even sighted in. Farr’s record has never been beaten. 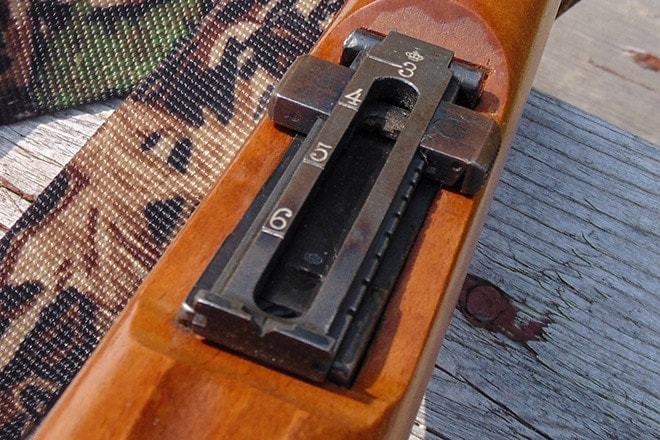 I decided to try something a little more practical though I also decided to use the oldest rifle I own, my sporterized Swedish M96 Mauser that was made in 1900. This gun has been a few places since it saw service in the Swedish military and eventually it made its way here to the United States. According to the brass disc in the stock, it had a bore in bad condition and a couple inches of barrel were chopped off. It also had an after-the-fact front sight that was way too tall, so I had the barrel cut back to 20 inches and a new front sight added with a blade from Skinner Sights that was very close to the original military style. This one allows me to use the original ladder rear sight.

I put out a piece of poster board first at 50 yards that was 11×14 inches and fired three rounds from the bench with Remington 140 grain 6.5x55mm ammunition. I didn’t want to add a bullseye to the target or even a point of reference since deer and other animals don’t wear them. I aimed at the center of the poster board and the three rounds grouped 2 inches. Keep in mind that this is from a gun that is 117-years old with some pretty basic open sights and a military trigger to boot. 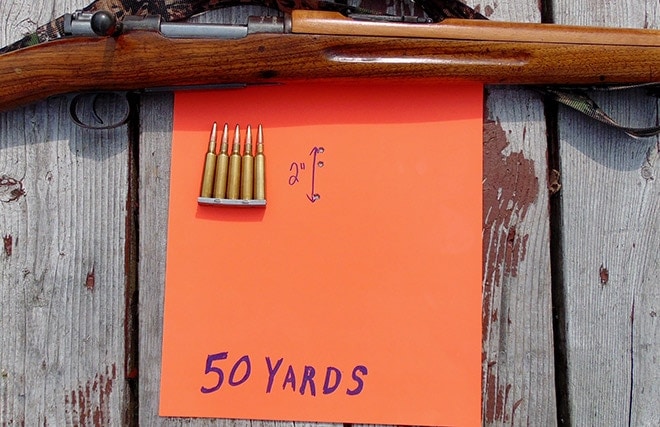 I then put out another piece of poster board of the same size out at the 125-yard mark which is the farthest distance my local range has and fired three shots with the same ammunition from the bench. All three hit and gave me a group of 6.5 inches. Again, let it sink in that this was from a rifle that was made before the first airplane got off the ground, had its barrel cut down twice, had a bad bore and is equipped with some less than sophisticated sights. If this rifle proves what can be done without a scope at a reasonable range, then it can be done with so many of the millions of purpose built hunting rifles out there made over the last 100 years. 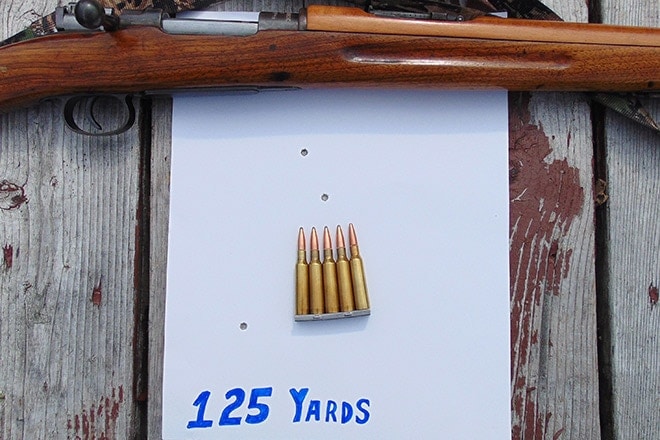 Six and a half inches grouping at 125-yards. (Photo: David LaPell)

Another thing to consider is that just because a rifle like my Swedish Mauser has some pretty basic open sights, doesn’t mean that these are the only types of open sight out there. In the late 1800s rifles were equipped with Vernier Tang sights that were capable of minute adjustments that helped buffalo hunters armed with Sharps and Remington Rolling Block rifles out to ranges that even today with a scope would be hard to fathom. Tang sights gave way to receiver mounted sights and peep sights that are still in use today.

A lever action rifle fitted with a peep sight from Skinner Sights is no slouch when taking deer or other game within reason. It’s not at all unusual to find older hunting rifles in all calibers wearing a receiver sight made by Lyman, Williams or Redfield. I have a pre-’64 Model 70 Winchester Featherweight in .308 that has worn a Williams receiver sight for longer than I have been alive. Within a couple hundred yards it is more than capable of taking any whitetail deer alive, even though many would think it is more deserving of a scope. 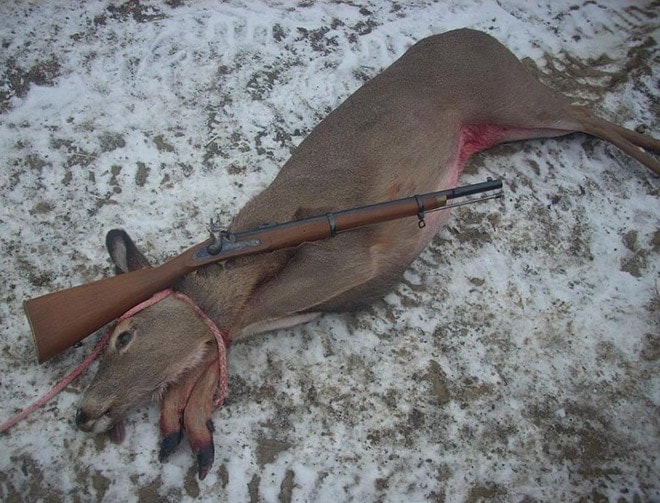 Hunting without a scope is still very possible, this whitetail doe was taken with this reproduction Enfield Musketoon at around 100 yards.. (Photo: David LaPell)

No one should look at open sights on a hunting rifle as a restriction, they should look at them as what they are — another way to get the job done. For decades hunters shot animals with open sights even though scopes were readily available. As long as you practice and learn what the gun can do at the ranges you plan to shoot it at, open sights will and can work. You just have to be willing to put in the effort and think outside the box a bit.