While the .22 LR is the undisputed king of the small game rifle hunting cartridges, sometimes more power is necessary. And there in lies the realm of the magnum rimfire cartidges: .22 Magnum and .17 HMR.

The .22 Magnum has been with us for a long time. It was introduced by Winchester in 1959 with their Model 61 rifle, then Ruger and Smith & Wesson quickly followed suit with their revolvers – as well as Savage with the Model 24. The new little bullet became an instant hit because it was a quiet rimfire round that could kill foxes and coyotes out past 100 yards.

At its introduction, the .22 Magnum’s ballistics impressed folks all over because it had the same velocity at 100 yards as the .22 LR did at the muzzle.

But there were some drawbacks to the .22 Magnum. First, it’s more expensive than .22 LR. And second, at very short ranges (with hollowpoints), it may destroy a significant amount of meat on some small game.

I have shot several .22 Magnums over the years, both rifles and handguns, and have seen what they can do to small game. I remember the first animal I shot with a .22 Magnum was a small gray squirrel – using the old Winchester 40 grain hollow point round – at about 25 yards and it really didn’t do that much damage. In fact, it was just slightly more than what a .22 LR would’ve done. 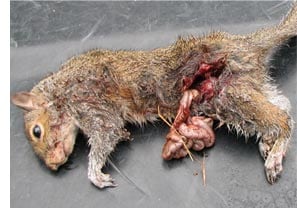 Whereas shooting a squirrel with a .17 HMR the result is – catastrophic. Almost every dead critter I saw, after having been killed by the round, had hard, large chunks of meat blown out. Hardly something you would want if you were after meat. While I have heard of some excellent points about what the .17 HMR can do to a woodchuck, I imagine the same can be done with a .22 Magnum.

While I have always had some reluctance about shooting coyotes with a .22 Magnum, especially some of the big eastern boys we have hear in New York, I can tell you that I would not even consider it with a .17 HMR. The bullet, while moving at a greater velocity, is still too light. I know of one coyote hunter, with years of experience, while looking for a quiet alternative to his .22-250 try the .17 HMR. He ended up giving up on it after less than a season because he had several coyotes wander away with more than one bullet in it. I have heard of other experiences with similar results, too.

Then there is cost. With everyone pinching pennies these days, the cost of ammunition is a big deal. Nearly every box of ammunition for the .17 HMR is well over a dollar or more compared to .22 Magnum. While it is only a dollar, it does add up over time.

The .17 HMR was a good idea, but unfortunately that’s all that it turned out to be. The .22 Magnum is still a better round overall. It’ll put down more critters without destroying much meat.