Clash of the battle rifle titans: SCAR VS VEPR So, you’ve tricked out your AR-15 with more tech than the space shuttle, but something feels off. Like B. B. King sings, “The thrill is gone.” Your AR runs well, it’s light-weight, the ergonomics are great and the aftermarket parts selection is unparalleled. Yet, something still doesn’t feel right.

Or maybe you bought an AK, hoping that a .30-caliber bullet would bring back the excitement of shooting, yet you’re still left wanting. Don’t reach for that Xanax yet. What you need isn’t chemical, it’s physical. No, not a lady friend, though that’s never a bad idea — unless you’re married or infected with herpes. You need what every American needs: a battle rifle.

What is a battle rifle?

A battle rifle is a select-fire or semi-automatic rifle in a full-powered cartridge like .308. Unlike the intermediate cartridges used in AKs and ARs, a battle rifle round is designed to reach all but the most distant targets. My two favorite battle rifle choices are a bit unconventional: the SCAR 17 and the VEPR 54r. They represent opposite ends of the battle rifle spectrum in terms of cost, ergonomics and modularity.

Since a battle rifle’s primary purpose is to fill the role between assault rifle and sniper platform, we’ll look at each of these rifles ability to deliver distant pain. Both utilize very powerful rounds with the edge going to the SCAR H’s .308 round in terms of muzzle energy. (SCAR’s 175gr BTHP .308 at 850 m/s generates 3,690 J vs VEPR’s 174gr HPBT 7.62x54r at 797 m/s 3,593 J) Though a difference of 97 J’s shouldn’t be your deciding factor, either cartridge with proper placement will down anything on two or four legs in North America.

The question of accuracy invariable delves into practical versus statistical accuracy. Arguably, at some point, no matter how accurate a gun is, the user won’t be to fully take advantage of it, since very few people are so talented. That said, within the operating range of a weapons platform, it wouldn’t be unreasonable to assume a gun should be able to engage the target within its effective range. In the SCAR’s case that target is an enemy combatant, in the VEPR’s, four-legged game. Both rifles function in either role satisfactorily, but this article is about battle rifles whose primary targets are human belligerents. In this role, the SCAR’s free-floated barrel and superior ammunition selection win the day. The VEPR’s 54r ammo can be found in match grade but there is only one, and it’s full metal jacket only, making it a poor choice for hunting.

Both the VEPR and the SCAR utilize a piston-driven gas system to cycle their bolts. The SCAR has an adjustable gas system while most VEPR rifles imported into the U.S. do not. This feature allows the SCAR’s gas system to be tuned to specific ammunition loads. That said, the VEPR is basically a beefed up Kalashnikov and as such has a spotless record of reliability.

From Russia with love. (Photo by Jim Grant)

If this question had been asked a few months back, the answer would be the SCAR, hands down. The SCAR’s standard magazine holds 20 rounds, whereas the VEPR 54r holds a scant five. In January, SGM tactical announced they would be manufacturing 20 round magazines, effectively leveling the playing field. Larger magazines exist for the SCAR, but one thing to keep in mind with battle rifle magazines is weight. The rounds are often twice as heavy as an intermediate cartridge and there is a point of diminishing returns, where having a massive magazine becomes too heavy to be useful. For example, if someone were to manufacture a 200-round, belt-fed conversion for the SCAR or VEPR, it would cause the weapon to weigh as much as a medium machine gun (MMG). Unlike an MMG, neither the SCAR nor the VEPR are designed to be used in extended automatic firing scenarios, negating any advantage the deep reserve of ammunition might afford. 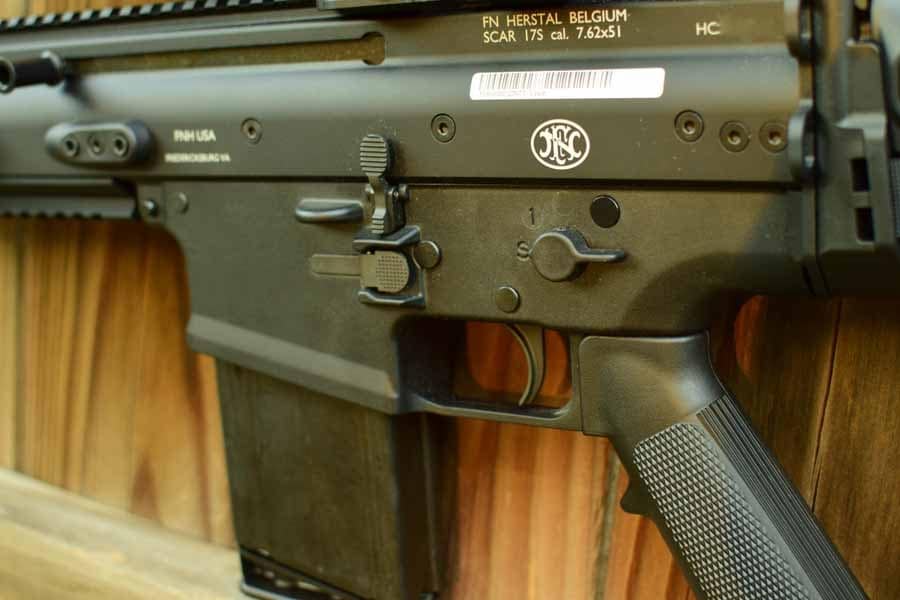 The SCAR’s ergonomics are nearly identical to the M16’s. (Photo by Jim Grant)

The upfront cost of the SCAR is nearly three times greater than the VEPR. The SCAR 17 retails for $2,900 and the VEPR for around $1,000. Unfortunately, for today’s shooters cheap .308 is an oxymoron. If you want to get some serious trigger time behind a battle rifle and not spend thousands of dollars on ammunition or reloading supplies, your best bet is 7.62x54r. In all fairness, people who can afford to buy an FN SCAR can usually afford to feed it as well, but that doesn’t mean they have to like it.

So the SCAR is more accurate, nearly as reliable and lighter than the VEPR, but you’re not convinced that the extra dough it worth it. Once you get some time behind both platforms you’ll understand.

The SCAR has very similar ergonomics to the AR15, with the addition of a stock adjustable in length and a comb that folds. The VEPR on the other hand features a fixed wooden Monte Carlo style stock that is not adjustable. 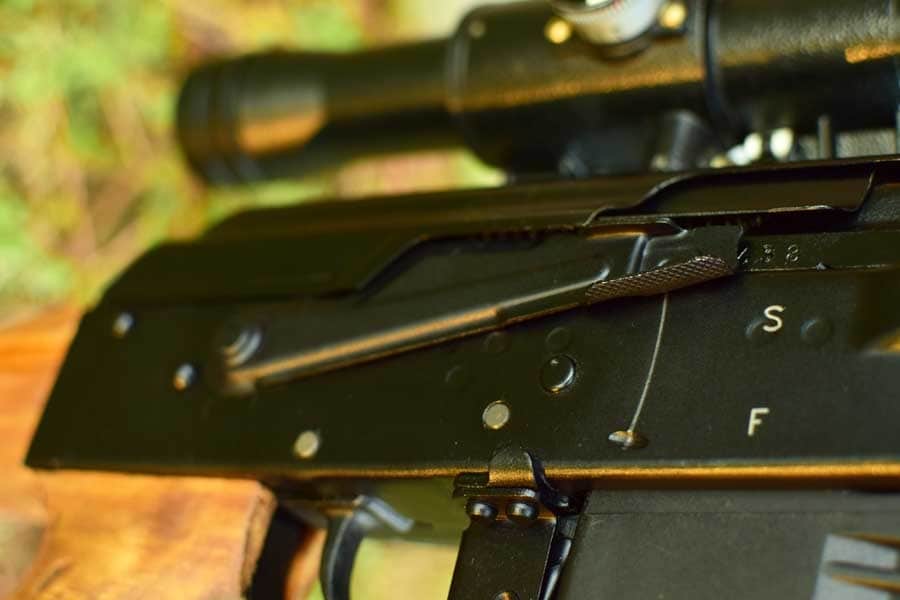 The VEPR’s controls are like an AK, and that’s not a good thing. (Photo by Jim Grant)

With the SCAR, magazine changes are accomplished by pressing the mag release button and replacing the spent magazine with a fresh one. This can be accomplished with the firing hand still on the pistol grip, a tremendous advantage when performing a tactical reload. The VEPR operates like an AKM, replacing the magazine is more time-consuming, but more positive.

The SCAR is a nicer rifle for certain. It’s more accurate, lighter and easier to accessorize. All these niceties come at a price that might be too high for shooters trying to get their first taste of battle rifles. If you’re not certain big caliber fun is up your alley, or you want your plinking gun to sound more like a cannon and pinpoint accuracy isn’t important to you, grab the VEPR. If you’re no stranger to battle rifles, but wanted something more modern or modular than an M1a, the SCAR 17 will not disappoint.

The SCAR is FN awesome. (Photo by Jim Grant)