John Moses Browning designed some amazing guns. But for most of us his career is defined by his work with Colt Manufacturing LLC. The Model 1911 .45 ACP. If he were alive today, I wonder if he’d feel the same way about the 1911 that The Eagles feel about “Desperado”. Maybe, if he were alive today.

Yet, Browning is more than the 1911. He is The Winchester 1894. The Browning Auto 5. The BAR. His influence, even when end users are unaware of it, shows no sign of diminishing.

Still—many Browning designs have slipped into obsolescence. Maybe that is completely justifiable. Yet, some that have been relegated to Curio and Relic status really deserve to be looked at again.

And my favorite of these…

The Colt 1903 Pocket Hammerless is reasonably small. It is just under seven inches long—almost four inches of that is barrel. The 1903 is a single-action blowback semi-automatic pistol chambered in .32 ACP. Its magazine holds eight rounds.

I’d like to acknowledge how much almost everyone dislikes the .32 ACP cartridge. Still, there were smaller rounds—Browning was working on the .25 ACP while developing the 1903. While most everyone will concede that the .32 ACP is small and underpowered, guns chambered in .32 remain in production.

In pocket pistols, like the Kel-Tec P32, the choice seems logical. The P32 is about the same size as most pocket guns chambered for .25 ACP. But in the Walther PPK, for example? The .32 PPK is almost the same size as the .380 PPK. What’s the point?

I can’t answer that. If everything is equal, there is no point in the .32 ACP. The folks at Colt must have asked the same question. The revamped the 1903 in 1908. The 1908 Pocket Hammerless (not to be confused with the 1908 Vest Pocket—which didn’t have a hammer, either) is chambered for the .380 ACP. I’ve heard that you can swap barrels and magazines between the two—I haven’t tried it and can’t find a source that I trust implicitly. 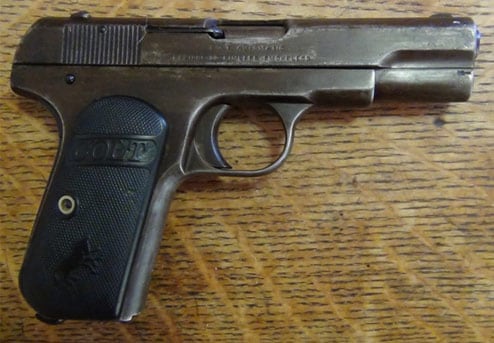 Why? They work, they are easily concealable and they are indestructible.

Look at the lines

The 1903 should look familiar. Follow the evolutionary diagram of the 1911 backwards and the 1903 fits in perfectly. Most of the 1903s were blued with hard rubber grips. A few were dressed up in nickel and pearl.

But it is steel underneath. And you can feel it. The 1903 isn’t heavy, exactly, but it has heft. It weighs a pound and a half empty.

How does it handle?

I’ve always liked the way the 1903 points. Even before I swore allegiance to the 1911 as the finest fighting pistol ever made, I liked the 1903. It does what many contemporary manufacturers’ guns are trying desperately to do. The 1903 is large enough to handle, but small enough to disappear. The thing is as thin as a 1980s runway model and the length of the barrel is perfectly suited to maximize the potential of the .32 ACP cartridges.

Watch on the video—look at the close-ups. There is almost no noticeable flash. The powder is burning up in the barrel and not ballooning out in some ridiculous Hollywood waste of energy.

And this point seems to be lost on the makers most of the short barreled pistols. Why so short? Thin, yes. Small framed, sure. Shortened grip, of course. But an extra inch or two of barrel is not that difficult to conceal. 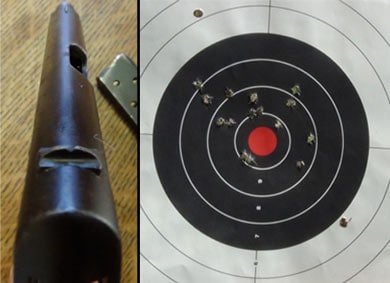 I can answer this easily—good enough. If there is one argument to be made against the 1903 it is that it isn’t any more accurate than it is. And the magazine catch is on the bottom of the grip, and not button activated like most pistols.

The sights will be very familiar to anyone who has shot an old-school 1911. That said, the sight radius is even shorter. But they are low and free of sharp edges, so they aren’t going to get hung up on anything.

From 25 yards, I can empty the magazine into an eight-inch target. The resulting “group” is not as cohesive as I might like. From 25 feet, I do much better. When I get within 15 feet, I can tighten up groups to two inches, but that’s somewhat ridiculous.

My opinions of the 1903 come from my ability to pull it and shoot without the aid of the sights. In these situations, I can poke crazy holes in center mass of silhouettes.

I’m not sure. Old things are replaced by new things. The government had procured enough 1903s and 1908s to continue issuing them more than 20 years after production had stopped. They were eventually replaced by the M15 General Officers’ Pistol in .45 ACP. Logical. General Officers rarely need to truly conceal their side arms. And the .45 ACP smokes the .32 ACP. It is a no brainer, really.

But the eventuality of that decision left the 1903 in a dubious position. The concealed carry market was dominated by small frame revolvers in larger calibers. While Walther and Beretta and others still made guns in .32 ACP, and still do, the chambering was distinctly unpopular. It remains unpopular today—despite long list of great guns chambered for the round. So much marketing relies on the simple binary question—why carry a .32 when you can have a .380? Why carry a .380 when you can have a 9mm? Why carry a 9mm when you could carry a .50 BMG?

The only place that the .32 seems to win the argument is when it is compared to a .25—as in the previously mention Kel-Tec ads.

But the Colt 1903 isn’t made of plastic. That still matters to some of us. There is a distinct value in a dependable firearm that, if properly cared for, will maintain its value—anywhere from a couple hundred to thousands of dollars.