Colt Diamondback Revolver Review: Much More than a Baby Python

“It’s a baby Python!” Well, no, it’s not, but it’s close – damned close – and you would be forgiven by almost anyone who knows anything about these guns for thinking so.

The Colt Diamondback is, in some ways, what the Python started out to be: a premier .38 Special target revolver.

The reason is, with the Python, Colt decided to go with the more powerful .357 Magnum chambering, so plans for a dedicated .38 Special were shelved. Then, about a decade later, in 1966, the Diamondback was introduced very much like a baby Python and when it came out it was also available in .22 Long Rifle (and for a limited time in .22 WMR). 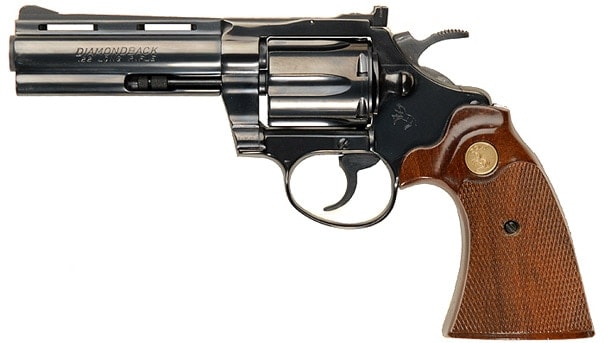 Here’s where the confusion lies. The Diamondback has an almost identical design and was built to the same exact standards of quality as the Colt Python, what some consider the “Cadillac” of revolvers. And the design had more than a little hand-fitting and tender loving care from craftsmen at the height of their skill in the Colt Custom Shop.

Based on the smaller “D” frame, the Diamondback was offered in Colt’s Royal Blue or nickel-plating, and both finishes were incredible. The bluing was very deep and rich, and has proven to hold a luster even after 40 to 50 years. The nickel plating was also brilliant and durable, much more so than other guns of that era.

The vent rib on top of the barrel, as well as the full-lug under, contributes to the Python-look as well as to a comparable shooting experience. Also like the Python, the Diamondback has excellent target sights – pinned in front (but adjustable) and fully adjustable in the rear.

The Diamondback, like the Python, is exceptionally accurate for a number of reasons. The barrel was bored with a very slight taper towards the muzzle. The cylinder locks up so there is no ‘play’ in between the chamber and the barrel. And, where you could say it is better, because it is chambered for a lighter load, the Diamondback is less susceptible to wear than the Python, so it’s less likely one will need to make any premature visits to a gunsmith. 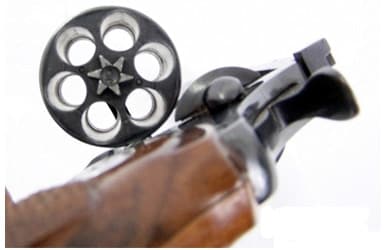 The trigger is phenomenally smooth in either double or single action. It has that “buttery” feel that is so characteristic of the Python. The one and only difference is that the pull on the Diamondback in double action is shorter since the whole gun is smaller overall.

Through its 22 years in production, the Diamondback had gone through very few changes. It was initially offered in just two barrel lengths: 2.5- and four-inches. The most popular version was the four-inch, and is generally considered to have the better balance. However, later in its run, Colt made it available with a six-inch barrel. And the original grips were checkered walnut, but later models were equipped with Pachmayr rubber ones.

The high level of hand-finishing meant that theses guns were always expensive, and was also the reason why Colt discontinued the line. All of them that I have seen or handled have held up extremely well, and they are often considered to be some of the best revolvers to this day by revolver-aficionados. As a result, Diamondbacks have continued to hold their value (averaging around $1300). They may not be in the same price league as the Python – but they’re close.

If you have never had a chance to handle or shoot a Diamondback, and the opportunity presents itself – jump on it. Even if your hands don’t quite fit it, try it anyway, they are exceptional firearms and you will be amiss not to.

Some consider the Diamondback to be an improvement on the Python, and, frankly, it would be hard to disagree with that statement, but I wouldn’t exactly say it’s a “baby Python,” it’s more like its little brother.