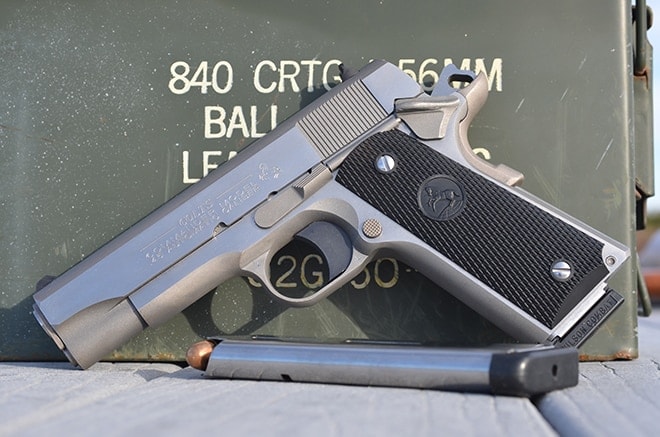 From the moment Colt’s Manufacturing Company introduced the original alloy-framed prototype Commander Model in the late 1950s as part of an Army contract bid, this style of handgun has had a dedicated following of pistol shooters. As such, Colt has kept it in production in various guises for more than 50 years (and with no end in sight) as other manufacturers made and continue to make their own copies of this pistol. 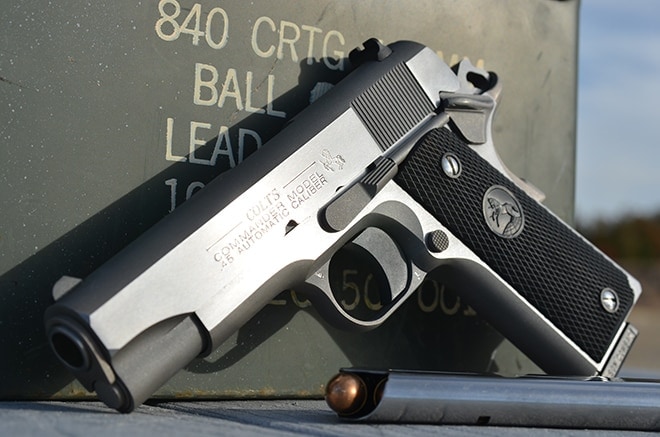 To me, there is only one “real” Commander, since Colt owns the rights to the name, and though there may be high quality versions of this popular concealed carry pistol out there from numerous other manufacturers, there is something to be said about buying one from the original manufacturer who started it all.

One of the newest versions of this platform is the Colt O4091U Stainless Commander, which is a basically a stainless 1991A1 frame and Commander-length slide outfitted with a 4.25 inch barrel, Series 80 internals, flat mainspring housing, long solid aluminum trigger, beavertail grip safety and standard sights.

My pistol came with hard rubber grips emblazoned with the familiar prancing pony and I was very pleased to see the updated beavertail grip safety instead of the “duckbill” grip safety that was standard on these and other Colt pistols for several years. 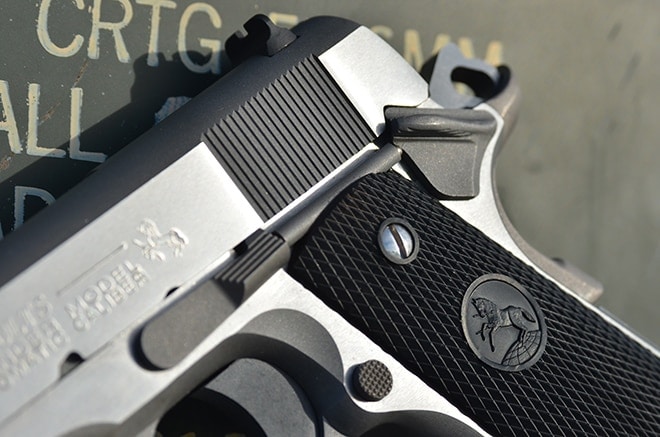 Retailing for around $900, I see the Stainless Commander as a good candidate for a nice custom gun, probably because I’ve seen some beautiful examples built on these pistols. Left as is and coupled with defense ammo, a good holster and a proper gun belt, it’s a no-nonsense concealed carry piece.

Internally, the Stainless Commander is a straight up Series 80 Colt, and everything is nicely fitted inside and out. There are those who still balk at the idea of buying a pistol with Series 80 internals, and debate still rages all over the Internet about the difference between Series 70 and Series 80 guns.  To be honest, I’ve never noticed much of a difference in performance between the two, whether for target shooting, competition or carry. They both shoot holes in stuff with top-notch accuracy and are almost boringly reliable in my experience.  I don’t turn my nose up at either one.

The finish work on this and other newer Colt pistols is starting to look a lot like the guns of the old days, with crisp, clean lines, no stray machine marks and lots of attention to detail that was sadly missing from a lot of Colt products during the 1980s and 1990s. It’s really nice to see Colt coming back into the game with the kind of high quality guns they were always known for, and it’s even better to see the oldest name in 1911-style pistols coming back to the market with guns that show evidence of listening to customer input. 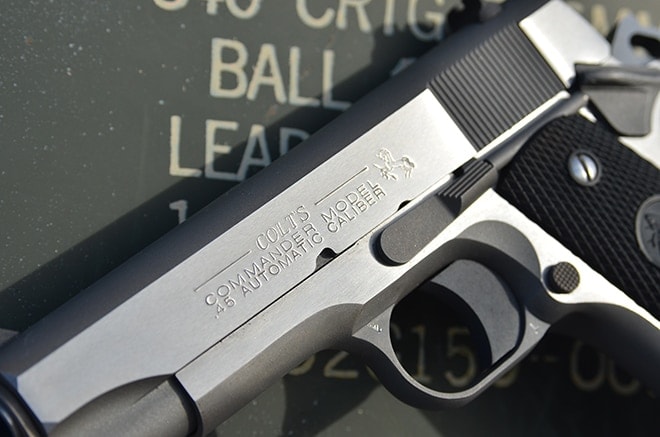 One of the most noticeable things about the Stainless Commander and similar carry pistols is the weight, but this is something I don’t really mind, because it soaks up felt recoil and helps keep the pistol steady in the hand. It’s an acceptable trade-off for me, but for those who favor lighter guns, the Commander is also available in an alloy-framed version that has all the features with slightly less heft. There are other versions of the Commander with more custom features, and even special editions, but I like the “plain Jane” stainless version because it has everything I want in a carry piece without too many bells and whistles.

The hard rubber grips and nicely-dressed edges on the grip frame make the Colt Commander a comfortable shooter. The flat polymer mainspring housing that comes standard on these pistols is not my favorite, but it works. The flat housing has a huge following, but I’m among the minority who believe that the change to the arched mainspring housing in 1924 was a great idea, and I plan to modify my pistol accordingly. I will be replacing the flat plastic part with a stainless arched, grooved assembly from Smith & Alexander, because it fits my hand a lot better, I don’t mind the tiny bit of extra weight and I think the arched mainspring housing gives these pistols a classic look that I associate with the older guns.

Taking the Colt Commander to the range for the first time was, as expected, a very pleasant experience. The standard sights are big and sharp enough to pick up easily, and regulated from the factory for a six o’clock hold. The trigger was smooth and with a crisp let off at what I un-scientifically guess to be around four and a half to five pounds. The undercut beneath the trigger guard and beavertail grip safety help the pistol sit low in the hand, and it points as naturally as can be, all of which make it a real pleasure to shoot.

Basically, there was nothing about this pistol that would cause me to not carry it. It ran fine, shot better than I could hold and was very comfortable, as a carry pistol should be. Colt got it right.

Carrying the Colt Commander is an exercise in weight management, in that you pretty much have to invest in a good gun belt and quality holster to keep it firmly in place either inside or outside the waistband. I wear a Wilderness Tactical Instructor’s Belt, which is stiff enough to accept the weight of heavy pistols without folding over at the top, coupled with a hybrid inside-the-waistband holster from one of three of my favorite manufacturers – Milt Sparks, Comp-Tac or Alien Gear. All of this combines to make a concealed carry rig that is comfortable and tough enough for prolonged everyday use. 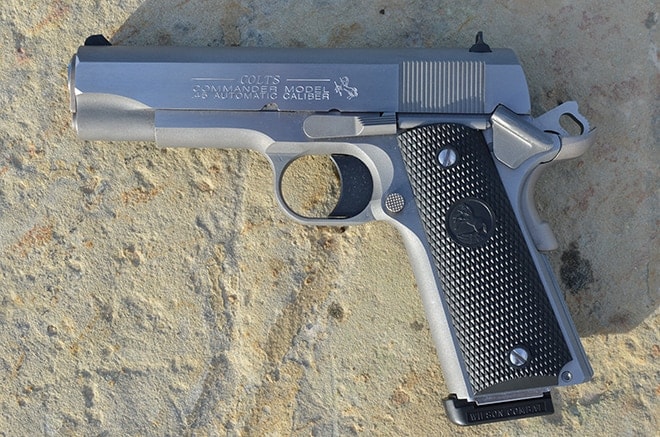 Colt Commanders make great custom guns and I have made several modifications to mine. (Photo Kenny Hatten)

For carry, I swapped out the two factory stainless magazines for three Wilson Combat 47D 8-round magazines, with a round in the chamber, giving me a total of 25 rounds on tap for whatever trouble comes my way. The magazines ride in a brown leather Gould & Goodrich double magazine carrier that keeps them close to the body and holds the magazines with a very tight fit. In the fullness of time, I plan to try tuckable inside-the-waistband magazine carriers for warm weather carry, but for now, the ones I have will do just fine.

The raging popularity of lightweight, reliable polymer-framed carry pistols was supposed to be the death knell for older, heavier “obsolete” guns like the 1911.  It was not.  While it cannot be denied that the “wonder nines” and other technologically advanced guns have made an unparalleled mark on the world of concealed carry, die-hard fans will continue to keep the Colt Commander in the conversation due to its workmanship, superb accuracy and classic panache.