Colt vs. Smith & Wesson: Reviving a classic debate among revolvers 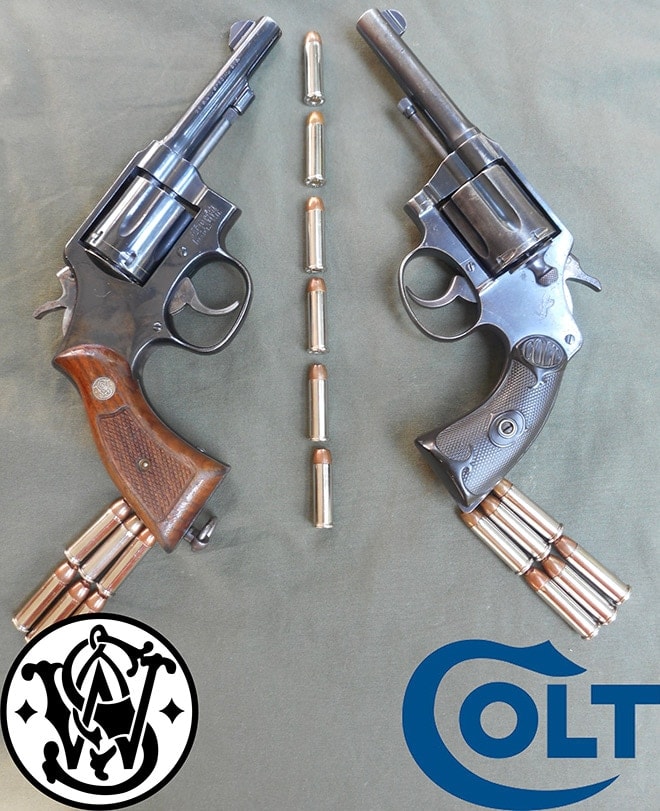 Before all of the endlessly debated firearms rivalries of today became the fodder of forums and social media. Before AR vs. AK, 870 vs. 500, or even Mauser vs. Lee Enfield — there was Colt vs. Smith & Wesson.

The rise of these two firearms companies took place at roughly the same time, and the founders of the companies both decided to exit the gun market for some time before diving back into the fray. For decades, the rivalry between Colt and S&W was akin to the rivalry between Ford and Chevy. It was only in the 1990s, with both companies in poor financial shape and beset by boycotts, that the rivalry faded from the consciousness of the firearms community.

I wasn’t around for the rivalry back in it’s heyday, but I always found it amusing that S&W is producing both 1911s and AR-15s — two designs made famous by Colt, and two companies I always thought of as revolver companies. As such it’s time to reignite the rivalry (if only for a short time) with two of their most famous service revolvers.

Sam Colt got his start in the firearms world in 1836 when he created a petite little pocket gun in .28 and .36 caliber. These guns would later be dubbed by collectors as the Paterson due to the location of his factory in Paterson, NJ. Colt claimed he was inspired by the locking mechanism that locked a sailing ship’s wheel in place. 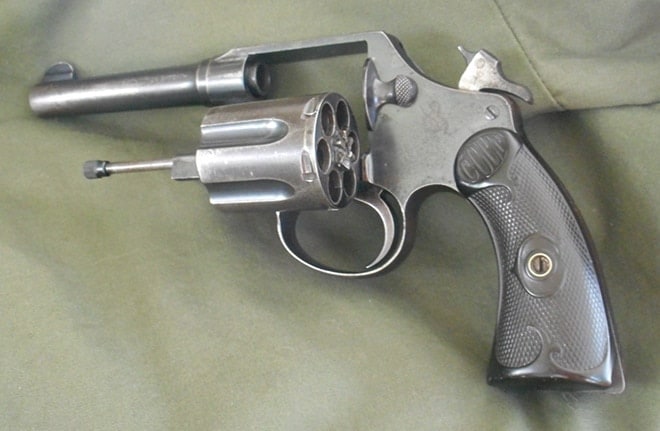 A potential safety hazard, a shooter can cock the hammer while the cylinder is out. (Photo: Francis Borek)

Aided by the invention of the percussion cap, he began to produce revolvers in earnest. Colt even pioneered the concept of mass-production decades before Henry Ford. The only problem was the lack of sales. His new revolver was expensive and delicate. Though it was tested by the US Army, it wasn’t soldier proof. His Paterson factory closed in 1843. Incredibly, the factory building itself wasn’t closed until 1983, though fires have left it nothing more than a standing ruin.

Horace Smith and Daniel Baird Wesson partnered up in 1854 to purchase the patent rights to the Hunt-Jennings and the Volition repeating rifles. Improving the design, the new company was dubbed the Smith & Wesson Company and produced a lever action pistol before being renamed the Volcanic Repeating Arms Company. So named because the rate of fire of a Volcanic lever action firearm was akin to an erupting volcano. 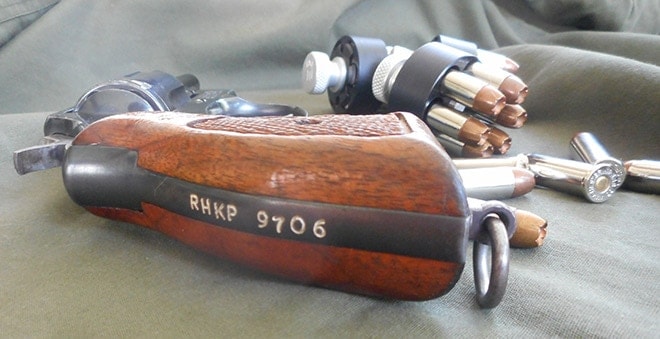 This company’s downfall was not only the cost of the gun but the ammunition. The Volcanic fired .41 caliber “Rocket-Ball” ammunition, essentially a minie ball filled with powder in the hollowed out interior and a disc primer. Since there isn’t much room in a minie ball, the Volcanic was laughably under-powered.

Cut from the same cloth

Both Colt and Smith & Wesson experienced failures early on. Eventually though they were brought back in. Colt was asked by a Texas Ranger captain named Sam Walker to build him a pistol that could kill a man or his horse at 200 yards. Colt dubbed his new pistol the 1847 Walker. With some help from Eli Whitney, Colt was back in the revolver game. His designs became lighter and stronger, culminating with the 1860 Army and 1861 Navy revolvers. Many consider these to be the most attractive Colt designs ever built. He would pass away in 1862. 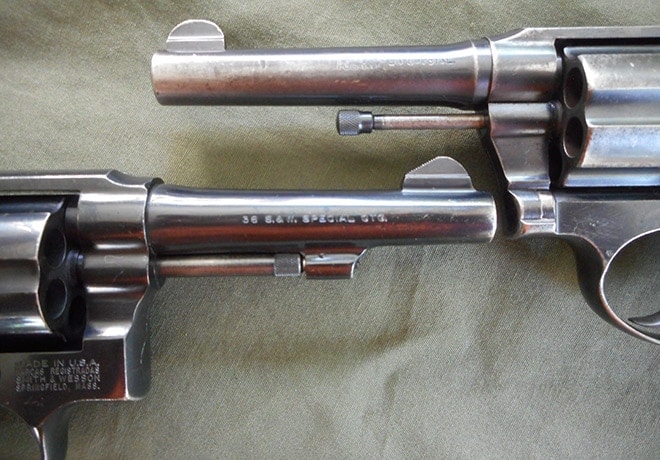 The easiest way to tell the two companies apart at a glance is to check the ejector rods. Colts lack a lug, while S&Ws don’t. (Photo: Francis Borek)

Most historians agree that one serious mistake Colt made was firing Rollin White who presented him with a patent for a bored-through revolver cylinder. Wesson convinced Smith to leave the Volcanic Arms Company so they could purchase this patent, and the duo began to make the first cartridge revolvers in the United States. Dubbed the No. 1, it was a diminutive little gun that was chambered in .22 Short with a tip-up barrel. Eventually they would develop the No. 2 in .32 Rimfire and then the massive .44 caliber No. 3 break open revolver.

All three men had incredible stories and their companies would go on to be symbols of American manufacturing and firearms ownership. During the 20th century, both companies competed in the lucrative law enforcement market leading to their heated rivalry.

The two pieces shown here are indicative of these company’s most popular designs: S&W’s K-Frame and Colt’s Police Positive. The K-Frame shown here is a Model 10 formerly issued to the Royal Hong Kong Police and made in 1987. The Colt is a Police Positive Special made in 1929. Both are chambered in .38 Special. While it might seem unfair due to the near 60-year age difference, the Colt locks up tightly and has a good bore, thus keeping it on par with the S&W.

Right off the bat the S&W seems like a far more substantial piece. It’s larger, heavier and the ejector rod locks into a lug on the barrel. The rear sight notch is wider than the Colt and the front sight is also thicker allowing for quicker target acquisition (though I do know that older S&Ws had narrower sights). The cylinder release latch is pushed forward to pop the cylinder out. Sitting in my hand, the S&W just feels like it can handle abuse better than the Colt. Also present are a lanyard ring and ‘RHKP’ engraved on the backstrap along with the rack number. Thumbing the hammer is heavy, but smooth. DA trigger is heavy while the SA trigger is short, crisp, and light as a feather. 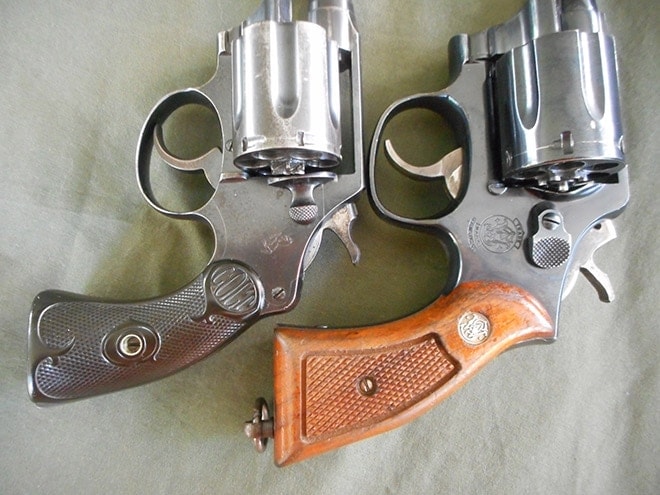 Though even the cylinder release latches are different. Push for the S&W; pull for the Colt. (Photo: Francis Borek)

The Police Positive is a far smaller revolver and I bet many wouldn’t hesitate to dub it a ‘kit gun’ these days. Unlike the S&W’s cylinder which rotates counter-clockwise away from the frame; the Colt rotates clockwise against the frame. Because of this, it lacks a lug to secure the ejector rod as Colt felt it was unnecessary. Colt’s advertising would even say it made it more durable, though I’ve seen more old Colts out of time than S&W’s.

The cylinder release latch is pulled to pop out the cylinder on the Colt. The sights are narrow, as was the style of the time, but they are still usable. Despite the finish wear, the gun locks up tightly and the hammer pull is smooth. The Colt is far smaller and lighter than the Model 10. Rather oddly, a shooter can still cock the hammer when the cylinder is popped out of the frame unlike the S&W, which is a potential safety issue. Thumbing the hammer is smoother and lighter than the S&W. The trigger is also heavy and smooth in DA, but crisp and light in SA. The Colt feels like it can’t take the abuse of the S&W, yet it’s age and condition show that this one clearly has.

Take it to the range

Both guns are exceptional pieces and their performance on the range is all a shooter can hope for. Six shots might not sound like much, but it was enough for many over the years and still is. Clearly both guns shoot better than I do, as they pulled in 2 inches at 10 yards standing while shooting in single action. Using my handloads (158 grain LSWC with 4.0 grains of Trail-Boss), the elevation was dead on, showing that the sights are regulated for heavier loads. The grips however are a bit too small, and I can see why products such as larger rubber grips or Tyler T-Grip Adapters have sold well throughout the years. 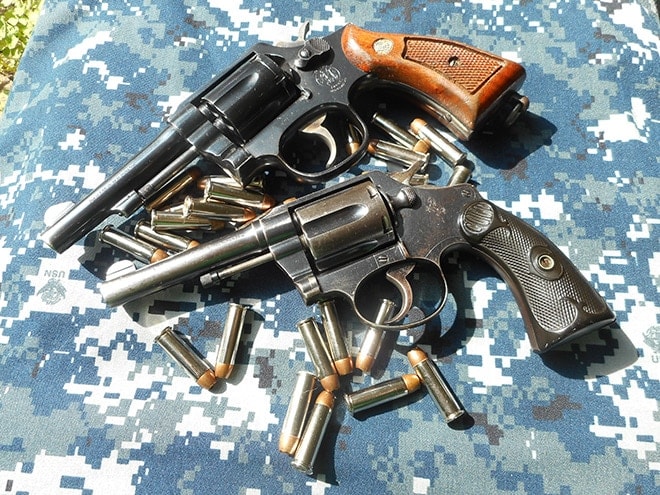 Truly a rivalry for the ages. (Photo: Francis Borek)

So, which would I choose if I had to choose only one? The S&W is far more substantial in the hands and does feel like it could take rougher treatment. The Colt is lighter, more easily concealed, and feels like it was built with a greater level of craftsmanship. If given the choice, I’d probably pick the S&W due to it’s durability and that spare parts for the S&W are more easily found when compared to this old Colt revolver. Granted, it’s a tough choice and the S&W only beat out the Colt in my estimate by a hair. To complicate matters, if I had to carry one concealed however, I would pick the Colt due to it’s smaller size and lighter weight.

These days, the rivalry between Colt and S&W is something for the history books. New rivalries in the firearms world have taken center stage with social media fueling the flames. But with Colt soon to unleash it’s new Cobra revolver and diving head first into the concealed carry market, they’ll be going head-to-head once again with an S&W revolver. So maybe, this old rivalry isn’t quite over just yet.