Elcan SpecterDR: perfection has its price 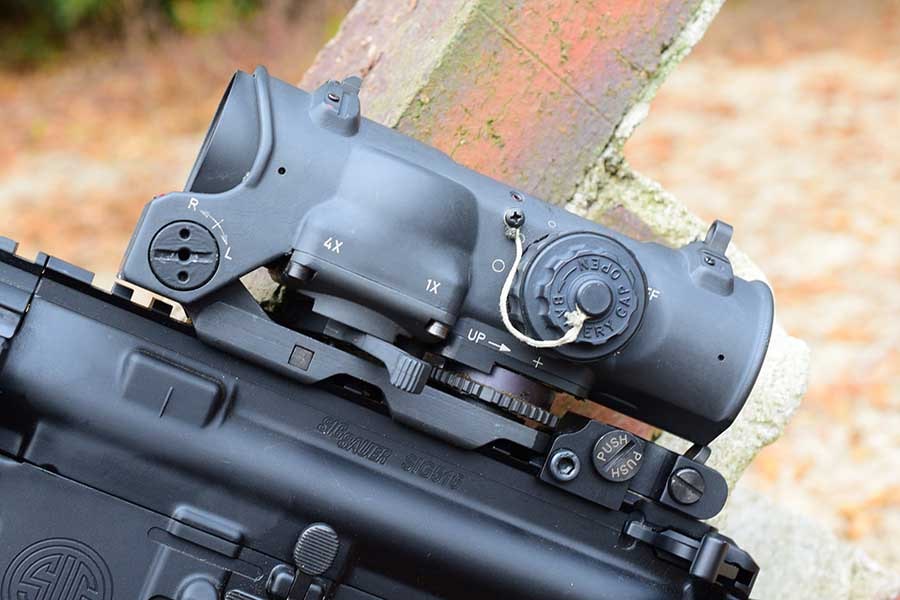 I’m a huge proponent of saving money by separating wants from needs. I want a custom-engraved SIG P210 for a nightstand gun, but my 9mm P226 is a more pragmatic choice. Likewise, I figured mid-range scopes from companies like Meopta and Leupold were on the same level as products from Elcan or Hensoldt. Countless readers have told me I’m dead wrong, so I put one of the highest-end military optics to the test, the Elcan SpecterDR 1-4x. Can this four magnification optic live up to its $2,000 plus price tag, or is it simply an expensive toy for mall ninjas?

Developed in 2009, Elcan’s SpecterDR is the companies response to SOCOM’s request for a dual-purpose optic to serve equally as a medium and close-range sight. Important to note, the scope is not a one to four magnification optic, but rather a one or four. The shooter slides the external lever to rotate an internal mirror that alternates between four times magnification and no magnification. Allowing it to serve equally as both a close-range, fast-acquisition sight or a limited magnification telescopic weapon sight for more distant targets. 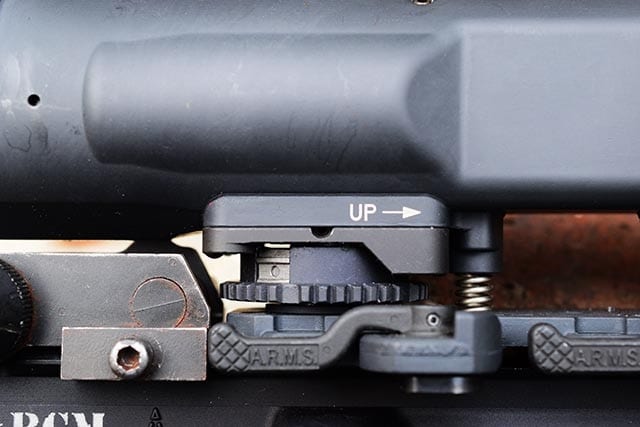 I know what you’re thinking, “That’s great, but what does it do that other scopes can’t, for much less money.” One advantage is has over other optics, is its colossal vision field even when fully zoomed in. Most scopes at four times zoom have a field of vision roughly 18 to 20 feet in width. The Elcan SpecterDR 1-4x has a 34.2-foot FOV at 4x, and a 146.3-foot FOV with no magnification. For hunters, this is only important when stalking prey or firing at moving targets like running boar. For competition and combat shooters, this giant FOV gives a magnified sight picture without limiting their peripheral vision and situational awareness.

The Elcan’s most important edge is its optical clarity. I wasn’t sold on the Specter until I ran one in a DMR-type match. The optical clarity of the Specter allowed me to quickly identify, engage and neutralize targets out to 750 yards with a four magnification scope. More impressively, the optic’s ultra-crisp images allowed me to see 5.56mm round impacts at the same distances.

How on Earth did I make 500 plus yard shots with a 5.56mm carbine and a 4x scope? The optical clarity was tremendously helpful, but it was the combination of that with the Elcan’s bullet drop compensator reticle. Available for 5.56mm and .308 chambered weapons and for both carbine and rifle barrel lengths, the BDC reticle tells the shooter where proper holdover is for fixed distances. These range from 100 to 1000 meters in 100 meter intervals.

When shooters handle the Specter for the first time, it’s immediately evident that it is intended for hard use. Not just because of its hefty 22.8 ounce weight, but also the knobs, lever and body’s heavy-duty construction. What makes these scopes so rugged is their combination of precision and rudimentary construction. Lost? Keep reading. 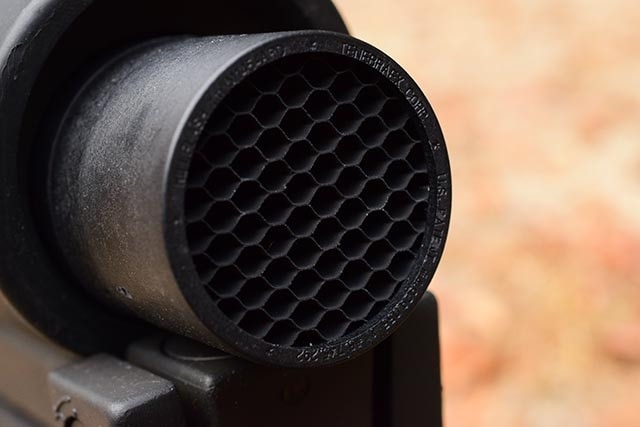 Optical scopes by definition are fragile; Their most important components are made of glass. This is doubly true if the magnification is adjustable, since it means the scope has more components that can fail. Adding to this, is the fact that the components for adjusting a scope must be small enough to fit inside the tube. Thus, Elcan moved the adjustment controls outside the scope’s body. Although this isn’t the only reason why.

Traditional scopes that allow users to change magnification by gradually moving internal component vary the optical train over the range of adjustment and can degrade image quality over time. External adjustments allow the scope manufacturer to perfectly optimize the alignment for the preset points for perfect image quality regardless of magnification. Some readers are imagining their Trijicon ACOGs right now, and are wondering why the Elcan series of scopes often cost twice as much.

In a word. Versatility.

What separates the Elcan SpecterDR 1-4x from competing designs from Trijicon and Eotech, is its all-in-one design. The SpecterDR switches from a red-dot to a magnified optic with a flip of a lever. It’s important to note that some shooters reported a point of impact shift when changing magnification, though the cause of this is due to user error. The scope has no significant POI shift if zeroed at the highest magnification.

All this sounds great, but how did it actually perform? To test the usefulness of the quick-change magnification as well as the optic’s usability and clarity, I mounted it on my SIG 516 Carbon TS and ran several 3-gun matches with it. The optical clarity is a huge advantage over other shooters when engaging obscured targets at distance. The sight served me well but I noticed that throughout the match I kept the optic on full magnification with the exception of the classifier stage where targets were only a few feet away. Which brings me to my next point. 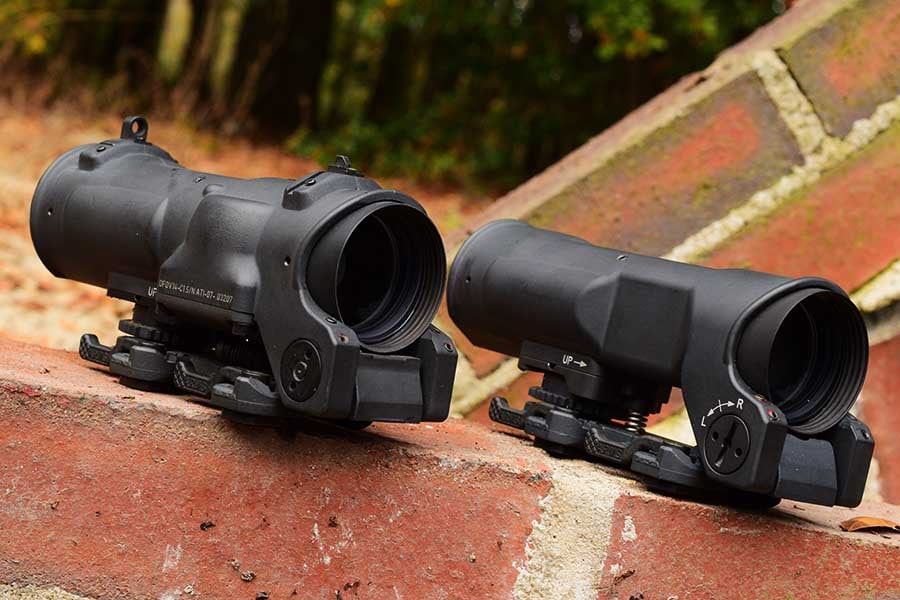 The Specter comes in both fixed and adjustable magnification, with the former costing half as much. (Photo: Jim Grant)

If a shooter is looking for a huge FOV and brilliant optical clarity, but has no need for adjustable zoom, they can save a ton of money by purchasing the fixed magnification variant of the SpecterDr, the SpecterOS 4x. 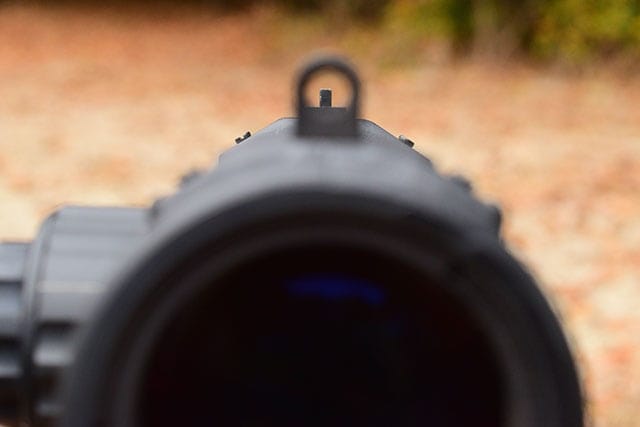 The OS version includes nearly every feature as the SpecterDR save for the adjustable zoom and built-in backup iron sights. Both scopes mount to a standard Picatinny rail VIA an ARMS lever quick-attach mount.

With an MSRP of $2,184 for the SpecterDR and $1,254 for the SpecterOS4x, neither Elcan scope is inexpensive. Though shooters who want an ultra-bright, battle-proven optic with unsurpassed versatility will have a difficult time finding a cheaper alternative, since nothing else comes close. Casual or recreational shooters might not get their full money’s worth buying either of these scopes compared to someone who actively competes or carries a weapon into harm’s way.However, neither group of gun owner could blame a missed shot on not being able to effectively see a target with an Elcan mounted on their favorite rifle.