Falling in love with the falling block rifles

Falling block action rifles rose to fame in the 1880s and fell from glory when times dictated the speed of repeaters.  However, the falling block action is far from dead; in fact, the classic action is rising again from the ashes of the old west.  The western “Quigley Down Under” bred a generation of Sharps lovers who quickly learned of the gun’s superior accuracy and staunch reliability.  Falling block rifles remain attractive guns for the nostalgic among us — those who seek the wildness of the old west and who value the power of one keenly placed bullet.

The premise of a falling block action is so simple — it’s beautiful.  The action is opened by pivoting forward the lever underneath the action body, often as a dual-purpose trigger guard.  The heavy breechblock then drops vertically down along machined grooves, thereby presenting the opened chamber.  After a single round is loaded, the lever is lifted up and the action locks back into place, tighter than a safe.  In the majority of today’s fine rifles, the hammer is automatically cocked as the block is closed.

Falling block actions are generally regarded as being stronger than bolt-action rifles and smoother.  When the action is closed and the chamber is locked and sealed, the whole receiver mechanism essentially becomes a solid block of steel — no bolt, no lugs, and incredibly simple mechanics.  Very simply put, falling block actions are most well suited to today’s powerful cartridges. They are often accurate and always ambidextrous. 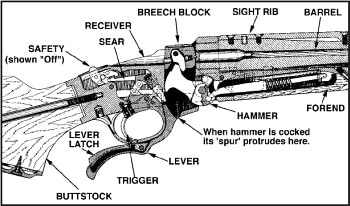 Given the compact action, these rifles can accommodate up to 4-inches more barrel length without sacrificing overall length as compared to bolts, while gifting increased velocities.  Some have ejectors, other extractors.  Practiced shooters can reload with ease, but certainly, the falling block has fallen out of popular favor due to its single shot limitations.

Several other actions are similar to, though not identical to the falling block.  Subtle differences defined the Martini-Henrys and Peabody actions.  Rolling blocks actions — brought to popularity by Remington — are similar but not quite as strong, with a pin or pins acting as pivots on an axis and the external hammer essentially locking the breech at the moment of firing.

While bolt action rifles have the hearts of the majority of avid hunters and distance shooters, falling block single shots were winning blue ribbons at 1,000-yard ranges in the late 19th century.  Though falling flock action military rifles were all the rage in the 19th century, they were easily supplanted by magazine fed bolt actions offering quick follow-up shots.  If the names Farquharson, Ballard and Borchardt are in your vocabulary, then you must already be an aficionado of these fine pieces.  If you are a fan of the Sharps, 1890 Stevens, or even the ‘ol Winchester 1885, then falling blocks have a place in your heart.

While the boom days of falling block actions are long past, there are some amazing rifles — defined in terms of both beauty and accuracy — produced not only in custom shops like Dakota Arms, but also on the mass market from Browning/Winchester and Ruger.

Long-regarded as the best of the single shots, John Browning designed and produced his High Wall rifles before selling the rights to Winchester, who made them famous.  Not only did the Browning-Winchester collaboration of the 1880s challenge Sharps, Stevens and Remington rolling blocks, they surpassed them.  Between roughly 1885 and the 1920s, Winchester produced nearly 150,000 single-shot falling block rifles. Given the inherent strength of the action, it was rumored that Winchester used their falling block rifles to test fire new cartridges. 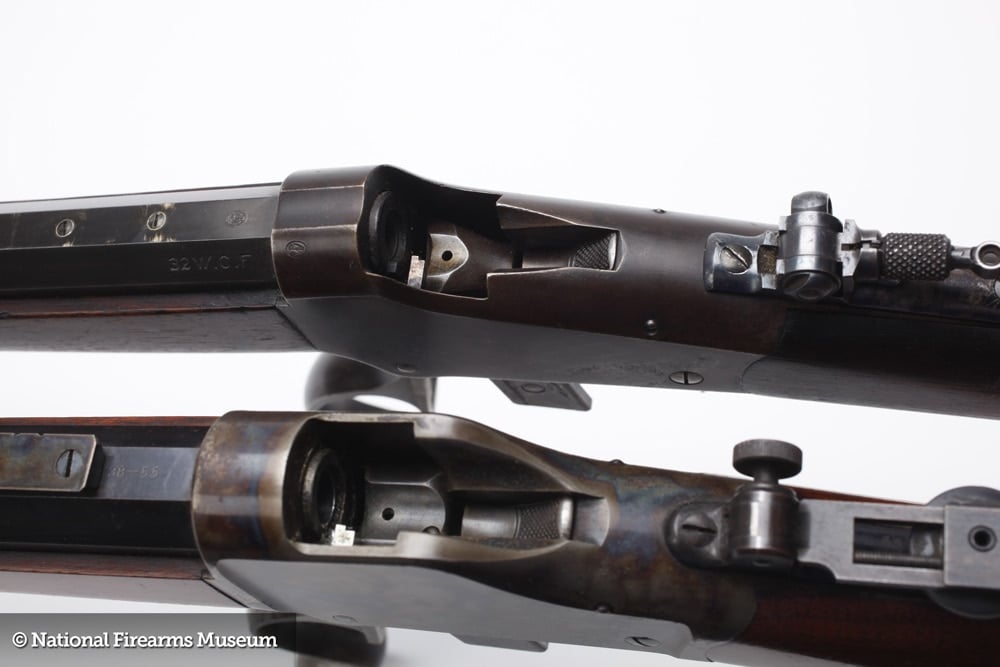 The High Walls of today carry a curvaceous underlever that operates the action and cocks the exposed the hammer.  Ejectors can be adjusted to direct empty cases either left or right or simply set for hand extraction, which is nice at the range. High Walls come standard with 28-inch octagon barrels, weighing between 8.5 to 9.5 pounds, some with crescent butt plates and tang peep sights, others drilled and tapped for scopes.  Chamberings are or have been available to suit most tastes, and Winchester once claimed to have made the 1885 in more chamberings than any of their other rifles.

Like the High Wall, Browning/Winchester also produced Low Walls with a lighter action geared toward smaller calibers.  Though Browning’s 1885 Low and High Wall Rifles were discontinued, Winchester continues production under the same ownership.  Given the current catalog, it appears the Low Walls in .17 and .22 calibers are the hot items, with the High Walls being moved into the historic offerings category.

While the High Walls represent falling block actions of times past, the Ruger No. 1 without a doubt defines falling block actions of the modern era.  A quintessential falling block with an internal hammer, the Ruger No. 1 has been in production since 1967.  While Sharps and High Walls never truly fell out of favor, Mr. Ruger kept the action alive — and knocking down dangerous game — all these years.  No. 1’s feature a sliding tang safety, various style walnut stocks, and blued receivers.  They’ve seen action from the dangerous five in Africa to the prairie dog towns of the west.

Ruger’s most popular No.1’s have been available in numerous configurations, including 1-A Light Sporter, 1-B Standard, 1-H Tropical, Internation, 1-V Varminter, and 1-S Medium Sporter.  While chamberings have come and gone through the years, the rifle has at one time been or other been available in nearly every caliber a hunter’s heart could desire.

While some falling blocks are either hard to find or high-priced, Rugers are readily available, affordable, and best of all, of fine American craftsmanship.

While there is no shortage of custom shops producing falling blocks, Dakota Arms has quietly been making a name for themselves in fine rifles.  A combination of one of the finest and most cost-effective of the specially-made falling block rifles, Dakota is a name lovers of the action have come to know.

The Model 10 offers a fit and finish never matched by the mass-produced numbers.  The standard Model 10 comes with a 23-inch barrel, weighing between 6 to 7 pounds depending upon caliber.  Dakota’s patented falling block receiver is machined from solid bar stock and can be fitted in nearly every caliber from .17 HMR to .404 Dakota.  Amazing grade XX walnut, ambidextrous safety and a crisp 3-pound trigger dress the rifles.  Case hardening is the icing on the cake of a rifle that almost looks too nice to carry afield.  Deluxe and Mannlicher models are also available, and if you crave a rifle that is uniquely your own, look no further than Dakota.

Sharps rifles, father of the falling block actions that popularized the rifle, achieved incredible long-range accuracy and will forever be an icon of the old west.  The rich history of the Sharps has been discussed a thousand times before, so suffice it to say the Sharps falling block in all its variations from black powder to match grade have been so loved since the patent in 1848 that reproductions remain strong on the market.  While Sharps repros are plentiful, the best cost money, but are easy on the eyes.  Take a close look at both Dakota Sharps and Shiloh Sharps.

While Uberti and others are putting out rolling blocks, Cimarron is producing replicas of John Browning’s 1885 High and Low Wall falling blocks rifles, complete with case hardened receiver.

From Sharps Ruger No 1’s, falling blocks have my heart. If rifles of this action fill your safe, suffice it to say we’d be fast friends.  And for those new to these fine firearms, don’t shy away simply because of the single shot limitations.  Plenty of hunting applications lend themselves to a solitary, well-placed shot or calculated reload.  Whether or not falling block actions make your heart fall aflutter, take this one bit of advice they independently offer.  Dedicate yourself to making that one shot count.