When I received my Bachelor’s Degree my father gifted me a membership to Front Sight, a firearms training school out in the Nevada desert. I heard mixed reviews on Front Sight, not because of the quality of the instruction, only concerning the eccentric owner of the school, Dr. Piazza.

As is the case with many of my plans, life got in the way and I didn’t have a chance to visit Front Sight until after this year’s SHOT Show in Vegas. Which is unfortunate, because I would undoubtedly have been a better shot during Media Day at SHOT if I had the instructor’s at Front Sight to instill better fundamental shooting skills. 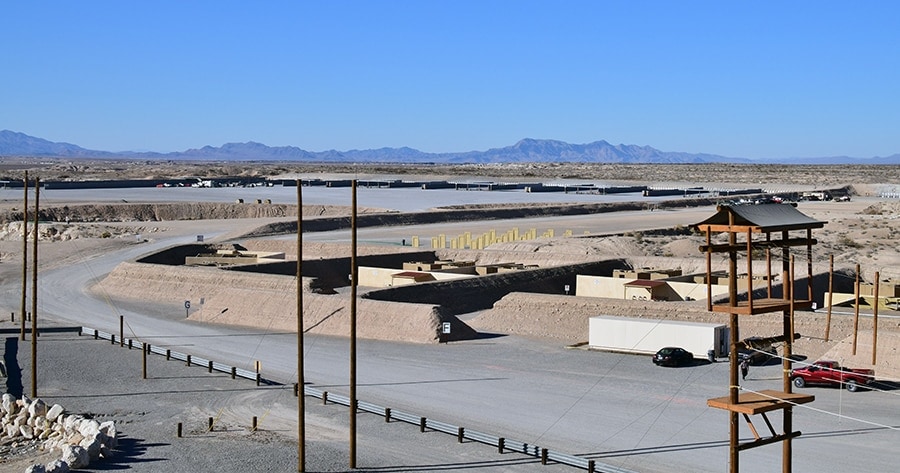 After I signed up for the Four Day Rifle Course I received an email outlining the equipment requirements for the class. I packed electronic ear protection, eye protection, a hat, sturdy belt, mag carriers, a sling for the rifle and approximately 480 rounds of ammo.

If you did not want to fly your firearm down, you could rent a gun at Front Sight, but you would need to purchase their ammunition from Stockpile Defense at Front Sight. Federal supplied me with its milspec M193 5.56mm ammo and while other students had issues with jams, I had none except for the ones I was forced to create. Also, if you are bringing ammunition, make sure it is factory new, meaning no steel bullets or penetrators allowed.

Afraid you forgot something? Check out my previous article, “10 gun training essentials” to make sure you have everything you need for class. 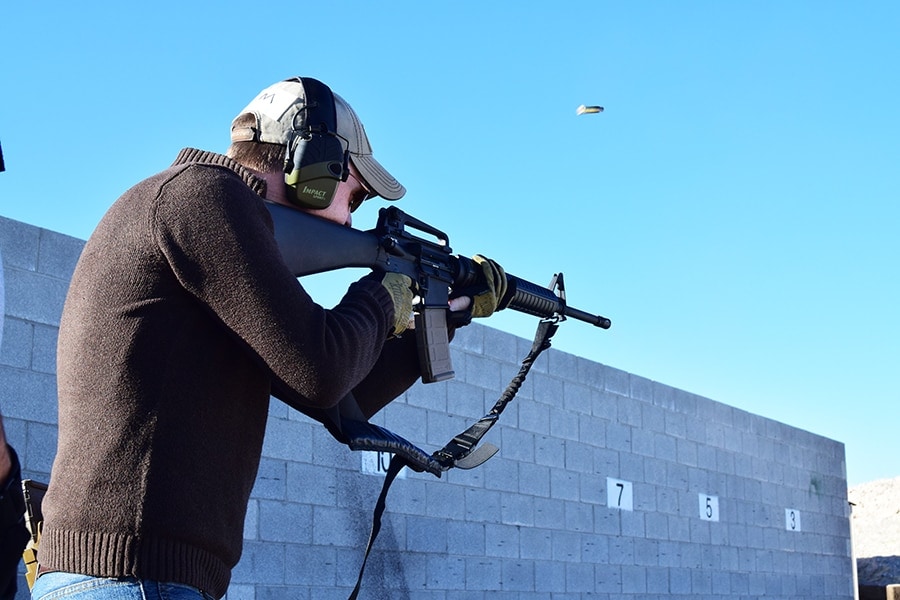 Yours truly running a hammered pair drill. (Photo by KT)

Day 1: Back to basics

When I first arrived, I thought my GPS was broken. The desert is inky black at night. Someone could be 5 yards away and you’d never see them. The minutes passed as I waited in my shabby rental car and the sun slowly poured over the gates of Front Sight, revealing a massive facility. Awestruck, I followed the guard’s instructions and headed towards registration.

The day began with check in where instructors let students know what range they’d be shooting on and an equipment inspection. The range officers checked firearms, holsters, magazines and ammo. They wanted to get a feel for what firearms people would be running for the course and make sure the correct ammunition type was brought, because the class would eventually be shooting steel targets.

Then it was on to the classroom for the signing of liability releases and a run down of the itinerary of the course. Nothing out of the ordinary if you end up hurting yourself you will not sue them. Normal run of the mill stuff. They also let us know there would be supplemental lectures during lunch, which were more like advertisements for products. However, they were actually really well planned out. They were unobtrusive and it was more like background noise during lunch. And if you didn’t want to pay attention, the speakers didn’t take it personally. 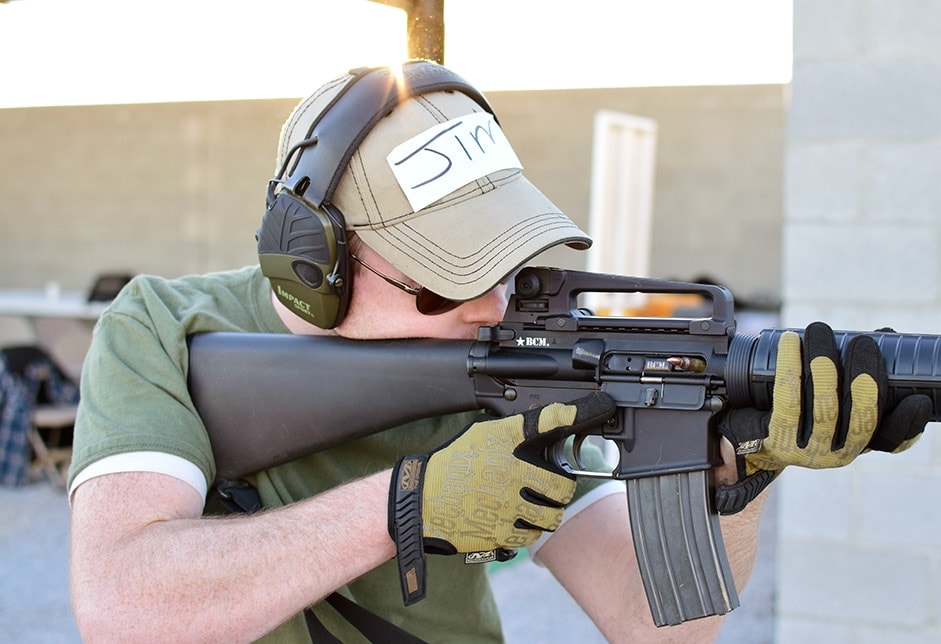 Me clearing a simulated stovepipe jam. (Photo by KT)

The classroom lectures on day one and two are mandatory for new students, returning shooters can skip these, though they contain good information for shooters of all skill-levels.

Once the classroom lecture finished it was off to the range where we put our names on the front and back of our hats. It was a nice way for everyone to know each other’s names without taking the time for individual introductions. There were a total of 52 students in the class, with five instructors/range safety officers. This ratio seemed low, but instructors were never difficult to reach.

After explaining the range rules and expectations for the class, the instructors paired students together in strings where one acted as a coach while the other shot. Instructors reiterated safety procedures multiple times to ensure everyone was on the same page.

They proceeded to identify the different parts of all of the rifles present at the range. While most were ARs, there were a few oddities including a .308 Springfield M1a and a FN PS90. The instructors then demonstrated how to perform safety checks. Their chants of “chamber check, mag check,” still resound in my brain every time I pick up a rifle. The instruction was very thorough but in case you didn’t hear them the fifth time, they were always willing to perform any action again.

The curriculum was centered on the three principles of good shooting: sight alignment, sight picture and trigger control. These are crucial fundamentals that were drilled into students, to ensure a solid shooting skill foundation for the following day’s instruction. There was little shooting on the first day. Most of it was spent on learning the basics of firearms operations and safety. 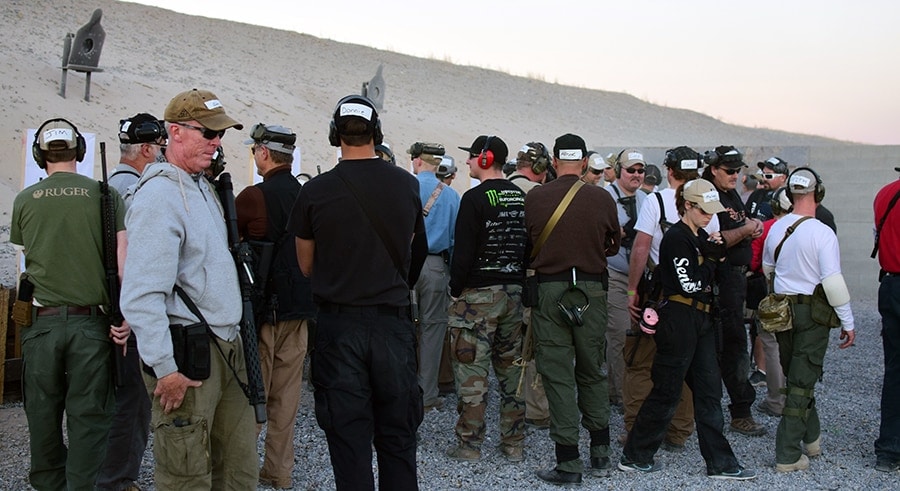 Day two began early with the zeroing of rifles. Once everyone was satisfied with their zero, the instructors went over different types of malfunctions and how to clear them. The second day was much more shooting-centric, but built upon the lessons of the first day. By the middle of the second day students were instructing one another, correcting form and honing their skills.

Students practiced shooting from seven all the way to 100 yards, learning how their zero affected their point of aim and point of impact. These are somewhat abstract concepts for some people, so having them experience the change first hand cemented the lessons.

The day ended with a tactical movement lecture detailing how to clear structures with a rifle. 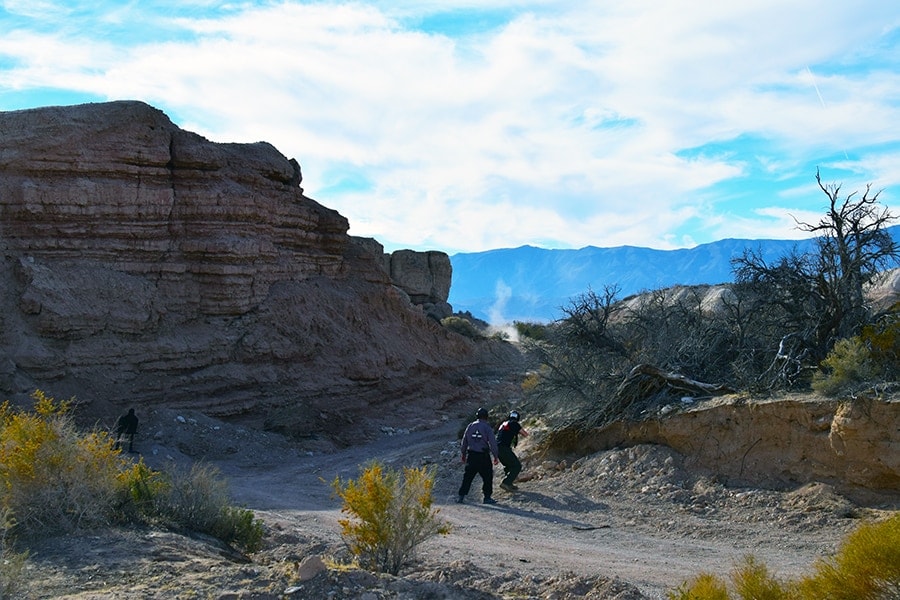 The Canyon is very humbling. (Photo by KT)

The morning of day three students were able to put the previous night’s lecture to practice. Using a dummy rifle, students cleared doors, “slicing the pie” before breaching through.

The instructors described how to handle close combat situations with a rifle by demonstrating how to engage smaller targets, like an intruder’s foot when they are concealed behind cover.  After clearing the doorways of imaginary meth labs, we returned to the range where we covered alternate shooting platforms like sitting and prone.

After students became more comfortable with the various stances they were taken to The Canyon, a shooting obstacle course. I initially tried shooting The Canyon with irons, but quickly remembered how my eyes are comparable to Mr. Magoo’s and opted to utilize my Meopta ZD scope.

The Canyon is a sobering experience. I’ve shot for a number of years, but walking into an ambush of steel targets while trying to minimize your own exposure to “gunfire” is exhausting. Try crouch-walking while quickly moving from cover-to-cover and you’ll need a breather after five minutes.

For the sake of filming, I ran the course three times. While the first run made me feel like a member of Tom Clancy’s Rainbow Six, the third attempt had my legs feeling distinctly gelatinous. I more closely resembled a member of SEAL Team 60+ than the real deal. 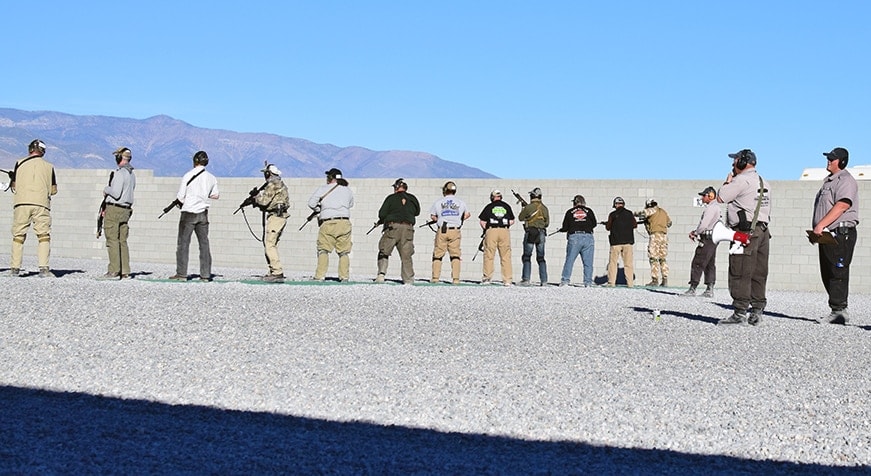 Day four began with a dry practice run through the graduation qualifier under time pressure. This was brilliant because this gave students the opportunity to determine if they could get into and out of an alternate shooting platform fast enough for the real test. I was going to sit at 200 yards, but discovered that squatting would be a faster option.

We practiced failure to stop drills with multiple threats. This was not only fun, but good practice in the event a shooter is confronted with multiple assailants. The instructor would call out random target numbers and the student engaged them in the order spoken. After each threat had received two torso shots and during after-action drills, the RSO would yell one of the numbers again and students would deliver a headshot to the number called.

Then it was onto a friendly Man vs. Man competition with steel targets. There was a hostage-taker target and two standard targets to be engaged in ascending order. This competition served as an opportunity to learn about your ability to perform under the stress of the clock. I was out in the third round because I missed my hostage target and hit the target behind it. The winner of the competition was a woman who had never shot a rifle before (either she is very lucky or Front Sight training works). 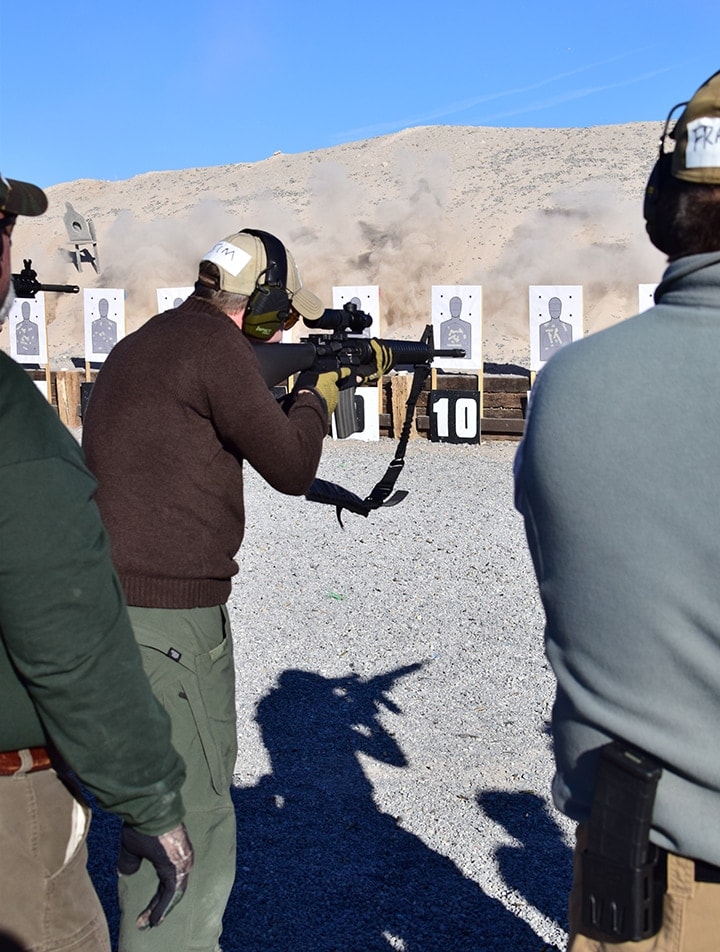 Front Sight Academy’s training is ideal for new shooters. The instructors don’t treat students like a new recruit, but like … well … students. They are eager to assist, knowledgeable and patient with students. Shooters considering Front Sight should opt for the four-day courses as they are vastly more in-depth than the two-day courses.

Overall, I found the training at Front Sight to be beneficial. I’ve been to a few shooting schools and I’d say that Front Sight is the most accessible in terms of new students. The training isn’t for everyone, as some people will find that intro classes aren’t intense enough for them. That’s fair, introduction to rifles isn’t meant for Army Rangers, they know this stuff.

However, I am not a Ranger, I need all the help I can get. If you’re trying to get your husband or wife into shooting, but they’re intimidated by most trainers, Front Sight is an ideal place to get them started.