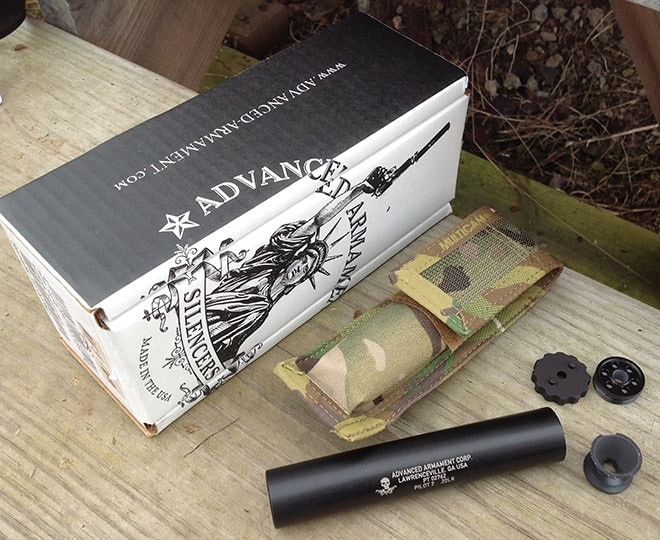 With all the hubbub about the impending (fingers crossed) passing of the Hearing Protection Act, suppressors are rising to the top of shooter’s wish lists.  What better place to start than an affordable rimfire silencer from an American company?  Guns.com ditched the ear muffs and did some plinking with the AAC Pilot 2.

Who is Advanced Armament?

The Advanced Armament Corp is headquartered in Huntsville, Alabama.  Their suppressors are made in the USA, and are available from rimfire to pistol to big bores with everything in between.  They offer a complete rifle, uppers, barrels, accessories, apparel, and plenty of other suppressor-related gear as well.

What is the Pilot 2 Suppressor?

The Pilot 2 is a 22LR-specific, lightweight, thread-mounted suppressor improving upon the company’s hit selling original Pilot model.  This second version is set apart by a redesign allowing the can to be disassembled for thorough cleaning and maintenance with the removable baffle stack.

Cleaning is made much easier on the updated Pilot two as you can totally disassemble the device. Still, cleaning all sevdn baffles can be laborious. (Photo: Kristin Alberts)

Measuring five-and-a-quarter inches in length and an even inch in width, the aluminum Pilot 2 weighs only 3.5 ounces. The aluminum body is anodize finished with what the company calls SCARmor.  The SPL sound reduction rating is 37 decibels.  Threads are standard ½-28 and as such, will thread directly onto most rimfire rifles and pistols without an adapter. 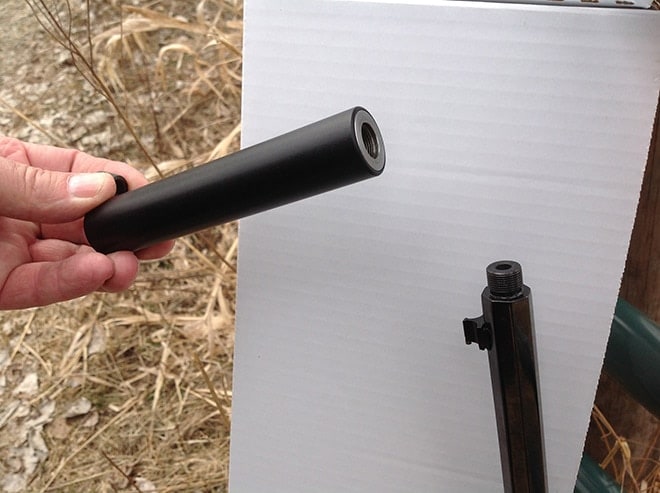 The internals are comprised of seven total baffles, with one coated stainless steel blast baffle and the remaining six being identical aluminum ones.  Depending on the type of ammo fired and the method of disassembly and cleaning, AAC recommends cleaning between 350-700 rounds. 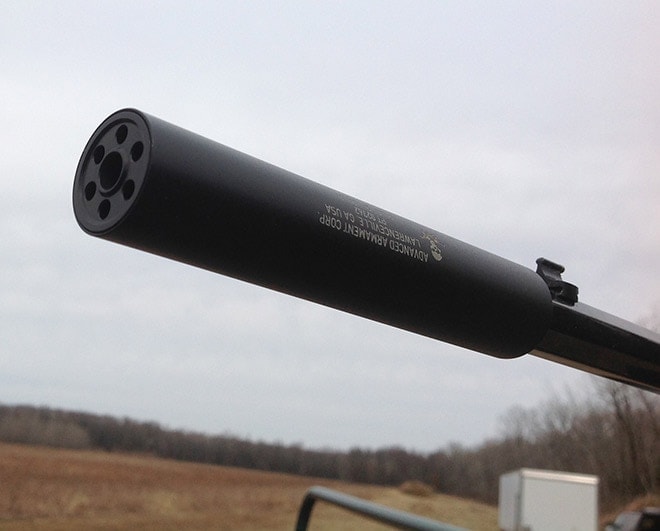 Advanced Armament’s Pilot 2 Suppressor features seven baffles, one made of stainless steel and the rest made of aluminum, presumably to save on price. (Photo: Kristin Alberts)

The Pilot 2 ships in a neatly branded cardboard carton and includes a camouflage holster, disassembly tool, and paperwork.  MSRP on the Pilot 2 setup is $349.99, though real world prices may be as low as $199.   The Pilot 2 suppressor is at the entry level end of the company’s line of rimfire options, with the Element 2 and Aviator 2 above it in both price point and features.

We had the pleasure of mounting the Pilot 2 on Henry’s latest lever action—the Frontier Suppressor Ready rifle with its shortened mag tube and threaded 24-inch barrel.  With a combination of both subsonic and standard .22 LR ammunition, we were home on the range with this lightweight device.  Though we did not have the capabilities to numerically quantify volume, users on the range were all the proof we needed.  Subsonic 22LR ammunition from CCI—at 1050 fps—made only a pffft of sound.  No crack, no bang.  Onlookers were quick to suggest that the levering action of the rifle and the thwack of the bullet into the berm made more noise than did firing the round through the Pilot 2.

We put on hearing protection before trying the standard/non-subsonic 1200+ fps ammo from Winchester, but that precaution was unnecessary. Though there was now a noticeable “crack” upon firing, it was still nowhere near loud enough to require ear plugs.  And let me tell you, from someone who spends as much time on the range and behind a gun as do I, it’s a true pleasure to be able to shoot sans muffs, plugs, or hearing protection of any kind without jeopardizing the ears.  Our only recent comparison to the Pilot 2 was a brief run with Thomson Machine’s Zephyr, and based solely on “the ear test,” AAC’s Pilot 2 was a clear winner in both sound and appearance.  Their attention to detail in finishing the tube, accurate threading, packaging, and included takedown tool and Multicam holster are all wins as well.

Cleanup on the Pilot 2 is a little messy, and care must be taken to use only aluminum-friendly cleaners.  It is nice, however, that the suppressor is able to be completely disassembled, which will greatly extend its life.  Users must pay attention to how the baffles were removed so they can be correctly re-installed.  Sounds a little tricky, but it’s really more time consuming than complicated.  Sure, we’d like to see all the baffles made of stainless steel for ultimate longevity, but this is an affordable, entry level can and AAC offers other models with those options. 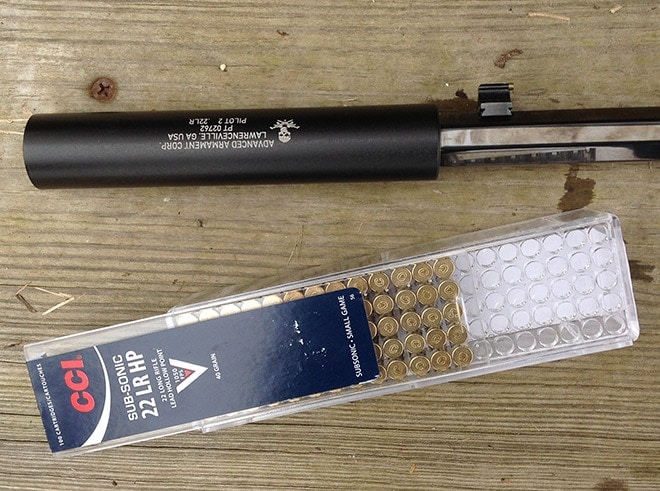 The only real downfall is the fact the Pilot 2 is rated specifically for 22LR ammunition, which the company notes multiple times in the booklet and on their website.  Some of the higher end cans allow for the use of magnums or 17’s as well, but that versatility again comes with a higher price.  The Pilot 2 may be an entry level muzzle device, but it’s well made and does its job with a price that’s hard to beat.

Whether for plinker or hunter, suppressors have their place in a shooter’s arsenal.  And the Advanced Armament Pilot 2 Suppressor is a great starting point where price and performance intersect.  The joy of shooting without hearing protection is a marvel for experienced shooters and often less intimidating for new shooters.  So if you’re entering the market of suppressed shooting—and with hope H.R. 367 helps more shooters enter the fold by avoiding exorbitant fees and wait times—check out the AAC Pilot 2.