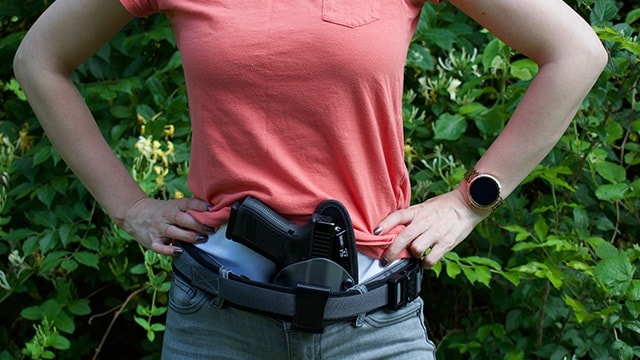 As appendix inside-the-waistband, or AIWB, carry increases in popularity so do the options available in the holster market. With more companies now offering their individualized take on appendix carry, it can be tough to choose from the bevy of options on the table. That’s why Guns.com has scoured the holster market to bring you our top five list of the absolute best holsters for AIWB. 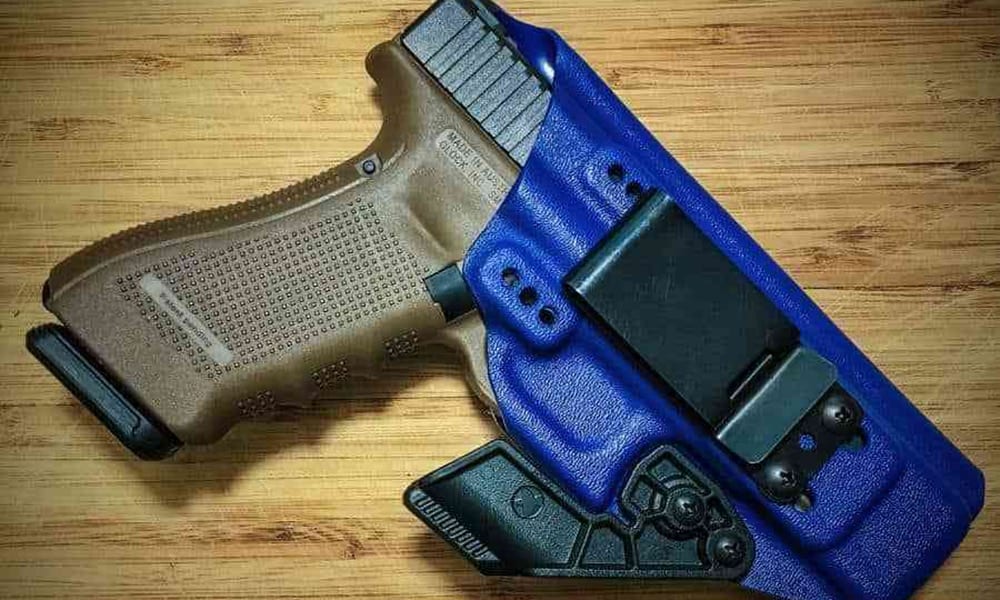 The Orion G19 holster adds a claw to its design to achieve a better concealment in the appendix position. (Photo: Dark Star Gear)

With names like Hitchhiker and Orion, Dark Star Gear delivers dynamic AIWB holsters for Smith & Wesson Shield and Glock gun owners. With the addition of the RCS Vanguard Claw, the versatile holster series by Dark Star Gear allows users to flawlessly conceal larger guns, such as the Glock 19, in the appendix position. The RCS Vanguard Claw, an option for the AIWB lineup, pushes the muzzle of the gun outward while drawing the grip of the gun in towards the abdomen. This nifty feature allows gun owners to better conceal their gun in the appendix position, ridding themselves of that blocky gun look.

Offering both belt loops and/or a belt clip for mounting, the Dark Star Gear holsters also give consumers the ability to further customize their rig with a choice of right handed or left handed configuration as well as colors. Slipping into the AIWB marketplace with a base price of $80, the Dark Star series is not cheap; but is well worth the price for its sturdy build and concealment. 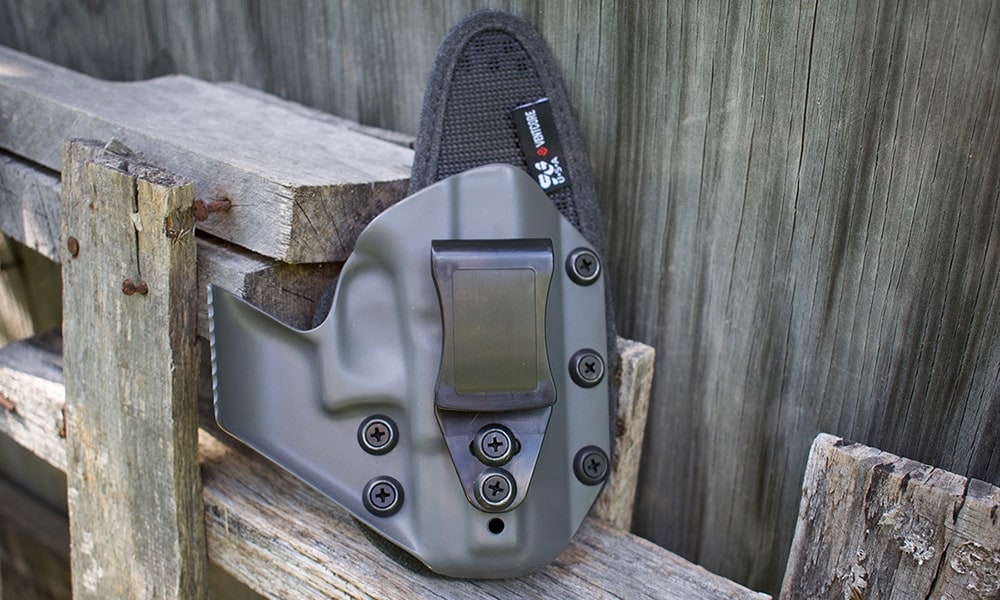 The Scorpion by StealthGear USA was not the company’s first foray in AIWB; however, it’s the most well designed of the SGUSA lineup. Utilizing a Kydex construction and single belt clip, the Scorpion also benefits from a claw design. As with the Dark Star Gear holsters, the Scorpion’s claw maximizes concealment by drawing the grip of the gun closer to the wearer’s body.

Available for a variety of gun models, the Scorpion also boasts multiple colors and even patterns for discerning gun owners looking to make a stylistic splash with their EDC gear. Utilizing the company’s VentCore backing, the Scorpion is, by far, the most comfortable AIWB rig on the list. With a price tag of $84 it’s not cheap, but for comfort it’s worth the extra dough. 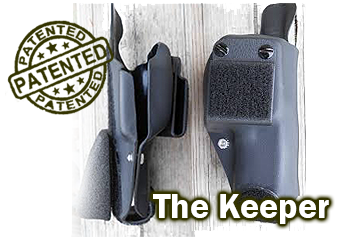 The Keeper uses a foam wedge to angle the gun’s grip in towards the abdomen. (Photo: Keeper’s Concealment)

The Keeper and Keeper Lite by Keeper’s Concealment have been well kept secrets among industry insiders. From tactical instructors to competitors, some of the gun industry’s best and brightest fall back to the Keeper to meet AIWB needs. While the Keeper forgoes a claw, it does employ a similar technique using a wedge. The optional wedge has the same benefit of angling the muzzle out and the grip in for better concealment.

The Keeper is the larger of the two holsters, designed for bigger guns while the Keeper Lite is perfect for mid-size pistols or consumers looking for a more minimalistic approach to AIWB. Customers have the option of customizing their holster for RMR cuts, threaded barrels and belt loop options. Available for 1911s, Glock, Smith and Wesson, Sig Sauer, Walther, Springfield Armory XD-S and a handful of HK models the Keeper is the priciest on this list with base pricing starting at $169. The Keeper Lite is slightly less expensive, slipping in at $99. 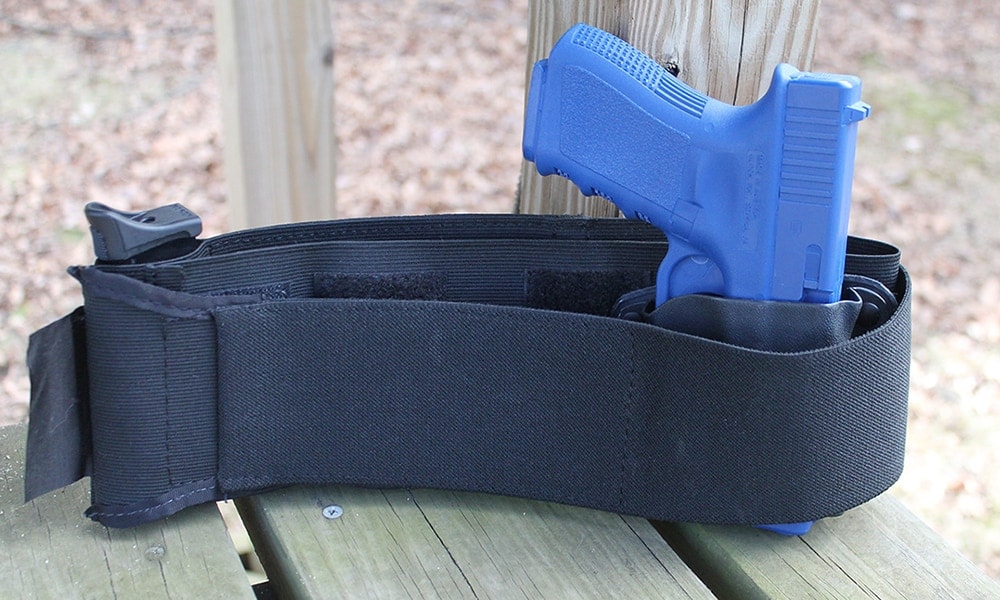 The Crossbreed Modular Holster adds versatility in the way of a belly band and safety thanks to its molded shell design. (Photo: Jacki Billings/Guns.com)

Crossbreed partnered with firearms instructor Rob Pincus to bring the Crossbreed Modular Belly Band to life. Featuring a Kydex shell mounted on a fabric style belly band, the concept affords carriers the safety of a molded, Kydex holster but with the versatility of a belly band. Further, the rig allows users to carry lights, extra mags or other EDC accessories without the need of a belt.

The downfall to any belly band is movement and the Crossbreed certainly doesn’t escape this trapping. Excessive movement does cause the holster to drift a bit—especially if carrying a larger handgun– but not enough to cause major issues. With a host of gun models to choose, Crossbreed leaves no stone unturned in offering the largest selection of models to choose. At $69.95, this holster is also the most affordable on our list. 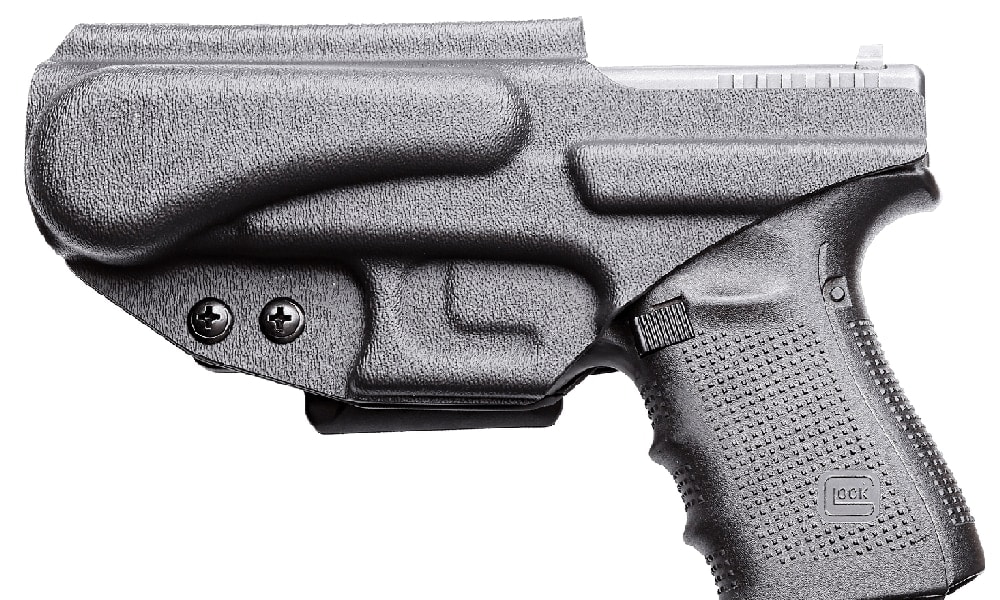 The Glock Classic Holster by PHLster is a no muss, no fuss holster model with a few upgrades for tricked out carry Glocks. Compatible with slide mounted optics, suppressor height sights and compensators, the Glock Classic does the job of offering options to those with enhanced Glock pistols straight out of the job – no pricey add-ons here. Mounted to the belt line with an adjustable snap loop, PHLster has gone out of the way to introduce a streamlined rig with anti-printing hardware for ultimate concealment in AIWB.

Unique to the PHLster is that it forgoes a claw or wedge and instead uses an integrated teardrop shape molded into the holster to achieve the same effect. Consumers aren’t going to get the bells and whistles of colors and patterns, however the Glock Classic offers a sleek and modern approach to AIWB. The Glock Classic Holster retails for $74.