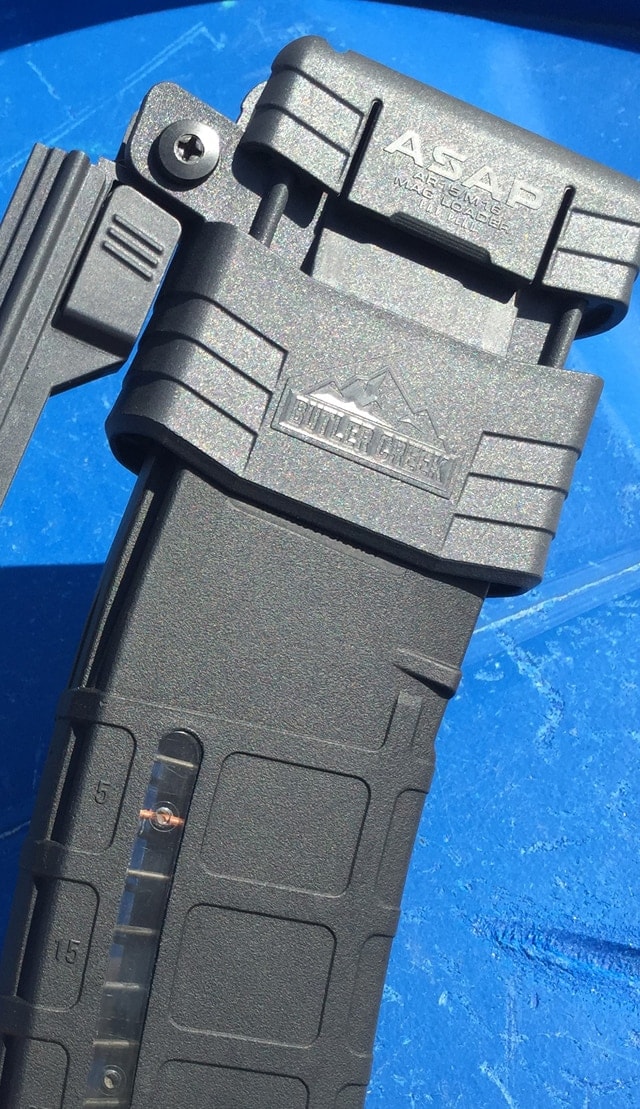 I’ll confess that I thought the concept of an AR magazine loader was a bit silly.  After all, isn’t an AR mag already easy to load? Skeptical, I agreed to test the ASAP mag loader by Butler Creek. Some of my skepticism was erased as a result.

This mag loader does present itself well.  Butler Creek packaged it in a hanging plastic display case, worthy of gift-giving. If first impressions mean something, this one’s in good taste.

The loader is about 1/3 the length and slightly bigger around than a 30-round magazine, with a folding lever on one side. To use it, the body of the loader slides around a mag. A tab on the outside secures it with an audible “click.” The lever is lowered to lock it in place, but it’ll work with the lever unlocked as well. Rounds are inserted horizontally, one at a time. After each round is in the loader, the user can either push down on the top, which pushes the round into the magazine, or work the lever up and down for the same effect.

Faster than hand-loading? Not for most of us, but it does turn a fine motor activity into a gross motor one. For some people, that can make the difference between enjoying a long shooting session and having to cut it short because of pain.

Trying it myself, I didn’t see much difference between using the loader and not. However, I thought of Nancy (not her real name), a friend who lives out of state. Never mind that she’s past 60 years of age; Nancy is more determined than most younger folks about logging practice hours with her Glock 19. But even for someone like her, for whom self-protection is a practiced skill, an ambush is a tough situation in which to prevail. That’s exactly what happened last year, when she was viciously attacked by a career criminal while at work. She survived, albeit with a severely damaged shoulder.

It’s been almost a year since that crime, intrepid Nancy purchased her first AR-15 this spring. She is gingerly, and unbeknownst to her surgeon, dipping her toe into the waters of defensive and recreational rifle shooting. We recently met up for a training session. She didn’t complain, but it was obvious that stuffing mags was the source of a twinge of pain with every round, especially when a mag was more than half full. I introduced her to the ASAP loader, showed her how to use it, and left to do my own range work for a while. Her instructions were to use the loader however it worked best, and to give honest feedback on whether it was helpful.

Nancy looked up from her chair, smiling, when I returned. “Heyyyy, this helps,” she said, raising the loader in the air like a trophy. “It was just so-so using it on the table, but I found if I use it on my leg, it’s really easy. No pain.”

The “on my leg” method was then demonstrated. Sitting in a folding chair, Nancy set the mag upright on her right thigh, pushed the ASAP loader over it, with the insertion side facing her left. With a bag of ammo resting on the table, she was able to painlessly fill the magazine. It left her with plenty of energy for shooting.
I am pleased to recommend that anyone with torso or upper-limb problems give the Beaver Creek ASAP AR magazine loader a try. I recommend this thanks to my friend’s determination to keep developing as a shooter after a disabling injury, along with a willingness to try new things. This device might make shooting easier and more fun for anyone who has had carpal tunnel surgery or other arm/hand injuries. If you’re one of them, or have a loved one who is, this might be a perfect problem-solver.