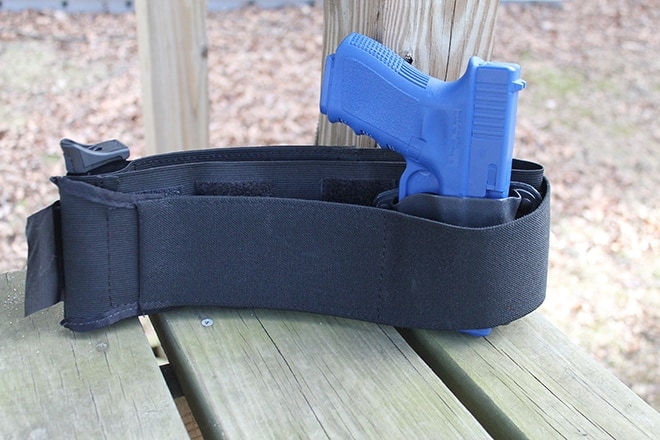 Crossbreed and I.C.E. Training’s Rob Pincus band together to create an updated take on the popular belly band holster. The Modular Belly Band aims to give concealers a more complete and versatile concealed carry solution.  Here’s our look:

Belly bands differ from traditional inside-the-waistband rigs in that they usually feature a long piece of fabric that is wrapped around the abdomen or hips and fastens with either Velcro or hook-and-eye fasteners. A firearm pocket is provided for pistols and with some models there’s an extra slot for a spare magazine or flashlight.

What sets this holster apart from standard belly bands is the Velcro backed molded kydex shell which securely and safely retains the firearm. (Photo: Jacki Billings)

Crossbreed and I.C.E. retain the purpose of this style of holster in the sense that it doesn’t require belt loops or a sturdy gun belt. The rig is worn in the same manner as other belly bands, though this holster functions best when pushed further down on the hips.

What differs in the Modular Belly Band is the addition of several Velcro attachment points along the inner layer of the holster. The hook-side Velcro attachment points, that’s the rough side of Velcro, accept any loop sided Velcro holster or mag carrier. Crossbreed does make a kydex shell that comes with the system but the addition of Velcro does mean you can pair other Velcro accessories with the belly band. It also means that more bang for your buck if you tend to swap out carry guns or you intend to share a holster. Smith & Wesson gals and Glock guys can finally coalesce with the purchase of one belly band and two molded shells.

The author easily conceals a Glock 19 under a white t-shirt. (Photo: Jacki Billings) 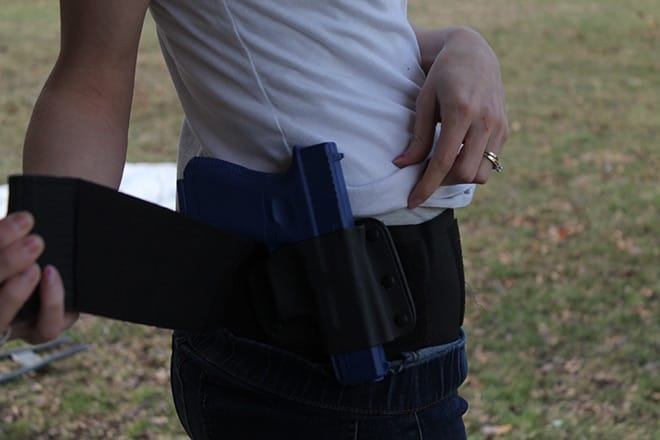 With the kydex mold placed on one of the Velcro attachment points on the inner layer of the holster, the outer layer is stretched over the kydex adding more security and stability to the rig. (Photo: Jacki Billings)

Placement with this holster is key. While it can be worn around the abdomen, the consensus was that it worked best when worn lower. Situated around the hips, the material had more to grab onto and ultimately stayed in place better. Anytime I ran this rig higher, the holster would come up with the gun on the draw, slowing my times. Placed lower, the holster rarely rode up and I was able to achieve that consistent draw.

While we’re on the topic of drawing, practice is another advantage to this rig. Training should be part of your carrying routine and that means working on drawing, firing and reholstering. Many belly band style holsters make it difficult to train and in fact some classes and trainers completely ban them for their inefficiency. The Modular Belly Band’s molded kydex shell makes for quick drawing and safe reholstering. 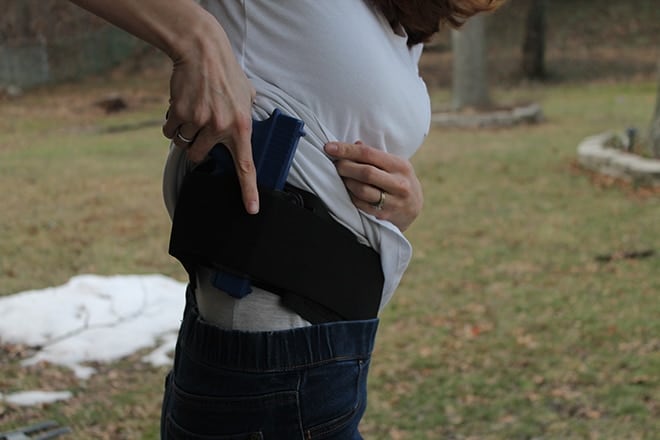 The holster can ride up if not properly placed inside the pant line. (Photo: Jacki Billings)

Safety should always be a consideration when choosing a holster. Crossbreed’s molded, kydex wins major points in safety as the hard plastic expertly covers the entire trigger area. The covered trigger guard prevents foreign objects or excessively itchy trigger fingers from entering the area and causing a negligent discharge.

The shell attached securely to my belly band and didn’t budge. My normal activities of running errands and chasing after my kids aren’t always rigorous, so I enlisted the help of my training partner to test the rig’s security on a distance. He donned the holster under a sweatshirt and jogging shorts and took off through town. After several miles he returned, giving the Modular Belly Band two thumbs up. Later that same day, he ventured on a hike with the rig and found it held the Glock 17 solidly in place. 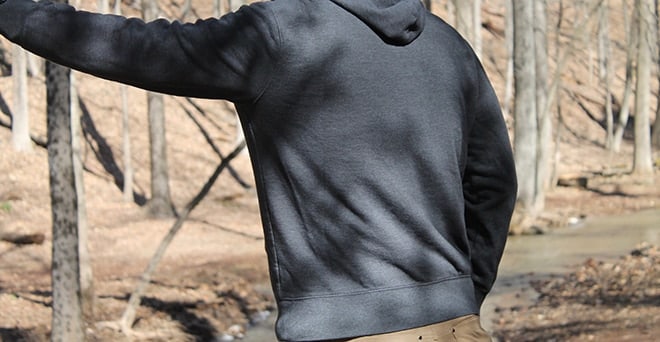 The advantage of the Modular Holster by Crossbreed and I.C.E. Training is its versatility. The ability to switch shells for different guns, turn the belt to a precise location and carry a spare mag make this rig ideal for non-belted carrying for both men and women. The Crossbreed Modular Holster retails for $69.95.