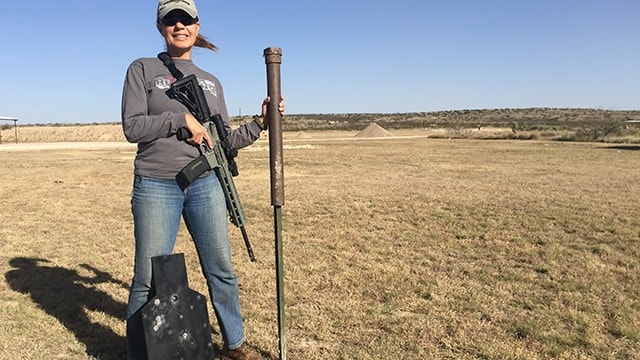 Few forms of shooting practice are as rewarding as making steel targets ring. The instant—or gloriously delayed, depending on distance—feedback is part of what makes our craft so addictive. Steel targets also make for efficient use of time. While walking back and forth between the firing line and target to check holes in paper is great exercise, it’s also inconvenient and eats up precious range time.

Problem is, steel targets aren’t exactly common. Add to that the substantial effort usually associated with transporting and setting up steel. CTS Targets has solved both those problems in fine fashion with a truly portable hanger design. Having begun business under the moniker Complete Target Systems, the company is now called Complete Target Solutions, conveniently retaining the same acronym and website. 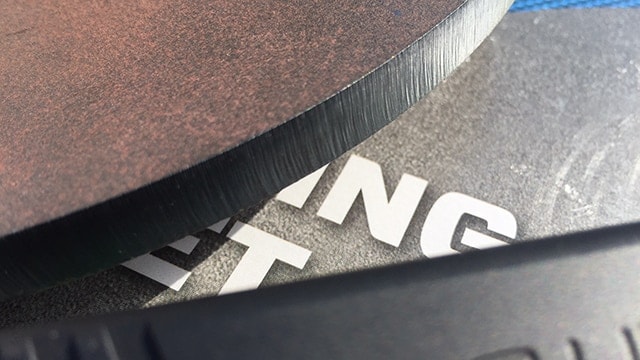 Detail of the precision-cut edge of the 8-inch round CTS target. (Photo: Eve Flannigan)

A precision laser cut leaves these targets with a clearly defined edge with no tapering and no sharp edges. The flat sides are finished in matte dark gray; the edges are shiny and show the “grain” of the steel. The T-post Pro target hanger easily attaches with a nut/bolt assembly to any of CTS’s targets drilled with a hole for hanging. The hanger then slides onto a typical T-post, found at local hardware or farm stores for around $7.00, and already pounded into the ground.

These targets proved a boon for this traveling instructor, who took the larger targets on the road for a rifle class held 400 miles away. The target plates, with hangers installed, take up nominal space in a cargo hatch. T-posts, cut to five feet in total length, likewise fit unobtrusively in the vehicle. What a pleasant change from steel targets, not to mention stands, of old.

Traveling with these targets is, for me, made more efficient by a simple two-foot segment of 2-3/8-inch steel pipe with a cap welded onto one end. This slim tool makes for easy packing compared to a traditional post pounder, and works the same way. 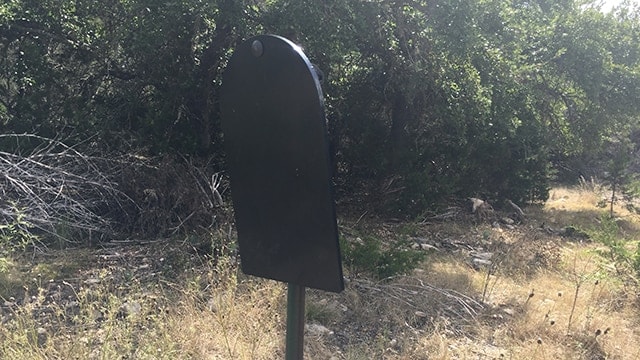 Nine students in the rifle class, having been admonished not to bring steel core bullets, banged away on the brand new plates for an afternoon using mostly .223 and some 7.62 x .39 ammo. With the tombstone set at 100 yards and the A/B/C zone torso at 200, the targets stayed in place and worked as they should all day, set on T-posts cut to 4.5 feet in total length and sunk into the ground with the winged ground stabilizers just showing above ground level. 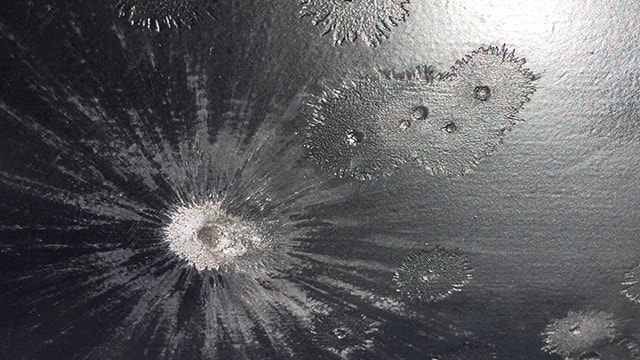 After a day of use, with dozens of rifle rounds having impacted on them, the plates showed palpable, but minor, pitting from about one in ten rounds. The only real damage is where rounds struck the right-angle edges. Some flattening of the edges at the point of impact occurred. This Is normal and unavoidable for steel target material. Over time, deep and prevalent pitting is an indication for replacement, but after a day-long session, these targets show great promise for being good for years of service with correct use—more on safe use of steel targets later.

As with the larger plates, the 8-inch rounds were set up on the fairly hard ground of our local range. They, too, stood up well to repeated pounding from 9mm and 40 S&W. Pitting on these is nearly undetectable by feel. Rounds impacting the edges dimpled the edge’s front surface slightly, but not the entire length as rifle rounds did.
We soon learned no to set the targets side-by-side. Separated by about three feet, both targets sustained some nicks from jacket splash-back. Staggering them will prolong their longevity.

A note about safe use of CTS or any steel targets: AR 500 rating, at minimum, is a necessary hardness to prevent deep pitting that can result in splash-back of bullet jacket fragments, perhaps more likely to be injurious to bystanders than the shooter. The minimum distance from muzzle to target for handgun calibers is 15 yards; stay at least 100 yards back for rifle rounds. I personally add a few yards to the pistol recommendation for pistol caliber carbines, on which the longer barrel adds, in general, about 15 percent of normal muzzle velocity. Lots of IPSC competitors may disagree, saying closer is safer for these relatively new ballistic tools. Either way, all of the targets in this test, using the T-post Pro hanger, naturally hung at a slight downward-facing angle, a safety-enhancing feature to help deflect jacket material right to the ground.

The T-post hanging 8 inch rounds were easy to install, took the shock well, and had minimal pitting. (Photo: Eve Flannigan)

Being an agricultural property owner, I confess to having chuckled at a demo video for this hanging system that shows T-posts being pounded deeply into the ground with three easy thumps. That’s not the case in many parts of the country, mine included. And here is where the only sticking point of this system showed itself.
Sliding the hanger/target onto the T-post entails dropping the unit onto the top of the post, matching it akin to a child’s square-peg game. There is a bit of play, approximately 0.25 inch, around this tailored socket setup. Hard pounding of the post, sometimes necessary to set it securely in rocky or hard ground, can cause malformation of the post sufficient to block installation of the target. This was remedied by re-cutting the post to a shorter length (and sharp edge), and finding a softer patch of ground. 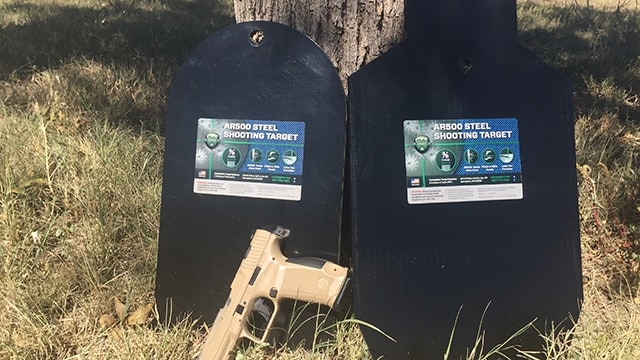 CTS targets can be used for rifle or pistol work. (Photo: Eve Flannigan)

With this limitation learned, I’ve developed the habit of choosing easier sites for post installation when available, and to only do the amount of pounding needed to secure the target. Experience in using the targets has helped me develop a feel for how much play can be present In the post/target combination. It’s a surprisingly forgiving amount.

Anyone wanting a lightweight, portable steel target setup should check out this T-post Pro target hanger. In combination with the company’s well-made targets, they make for very satisfying, time-efficient training on rifle, pistol, or both. The company has more permanent installation systems, but this easy one could just as well work for long-term installation.