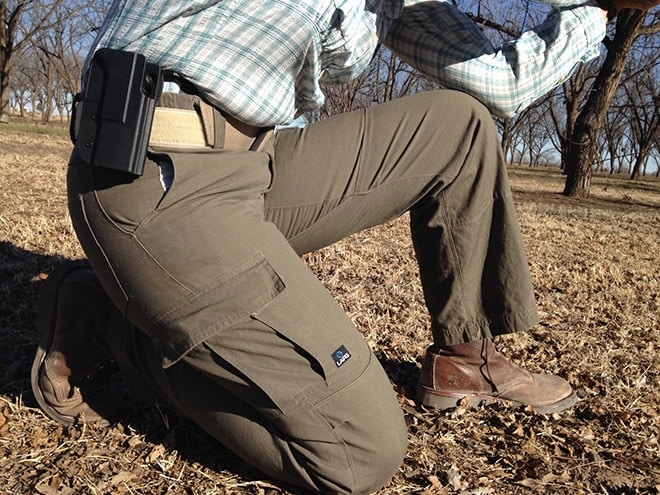 LAPG Urban Recon pants. The flex is great, the white lining not so much. (Photo: Team HB)

It was just after Black Friday 2015, and LA Police Gear  (LAPG) wooed me to their site with an email about a sale on pants.  The company seems to be rolling out a steady stream of its own pants recently, with many variations on the tactical theme. 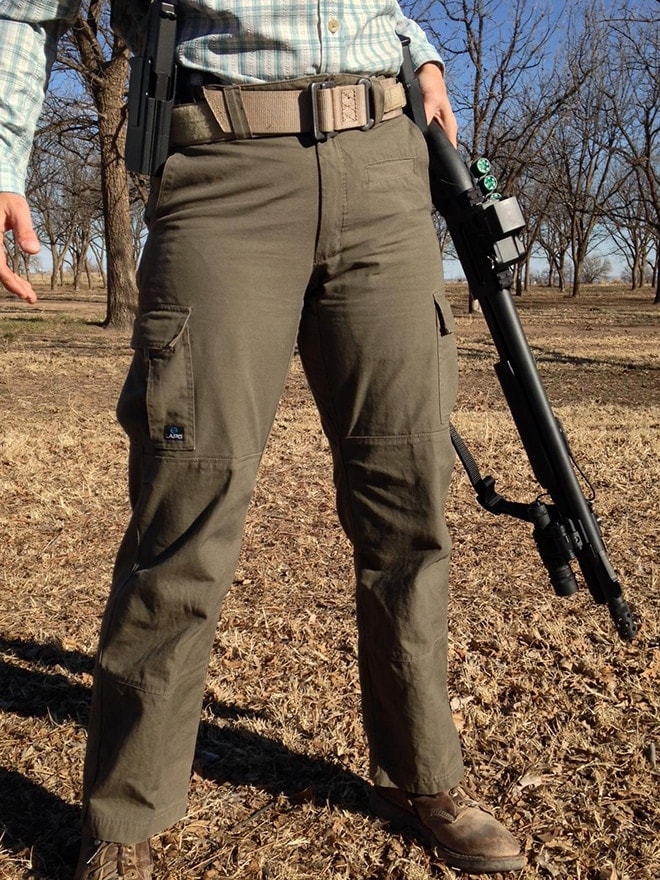 LAPG cargo pants held their own on the range. (Photo: Team HB)

Among several choices, the Urban Recon Pant caught my eye with the interesting feature of “articulated knees.” I’m ever in search of the perfect tactical pant, and the regular price of $22.99 plus shipping seemed like a heck of a deal—with the sale, I’d save the shipping cost.

The pants are offered in a tremendous range of sizes from 28- to 44-inch waist sizes, and seven colors, black plus six others in the tactical palette.  They’re 100% cotton canvas duck, and LAPG’s listing describes them as less baggy than typical tactical pants.  It was still the articulated knees part that inspired me to place an order… I find most pants restrictive in the knees.

This wasn’t my first order from LAPG, and I was almost expecting to get a back-order notification, which has been typical of my past experiences with the company.  The pants showed up right on time, though.

Slipping them on, I noted there’s no doubled fabric over the knees, hence no place to insert knee pads. The articulated knee feature is a bit more fabric, discreetly pleated at the side seams, over the knees.  It’s a nice feature that I’m sure, over time, will compensate for the lack of double-layer fabric  there.

These pants are comfortable, especially for being 100% cotton.  That’s accomplished in part by a short elastic insert on each side of the waistband.  This feature is covered by a belt on the range and adds comfort without detracting from appearance. 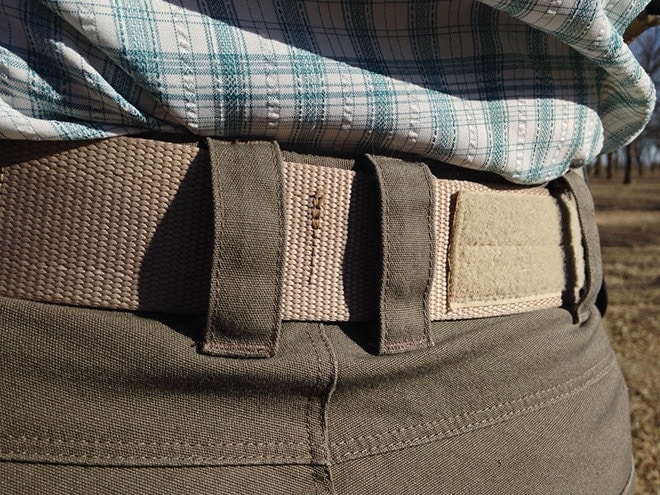 As a female, the thing I really like about the construction of the Urban Recon pant is the slightly higher waistband in back. I’ve worn them now for many long days, including shooting in prone and kneeling, as well as carrying range bags and targets around.  Through all, my shirt has never come untucked in the back. Especially in winter, I really appreciate this feature.

The YKK brass zipper is excellent—I know because I broke the button off the waistband in early December, and have worn these pants almost weekly for the past two months with a belt covering the missing button.   The zipper never threatens to start down the “XYZPDQ” path.  It stays put. 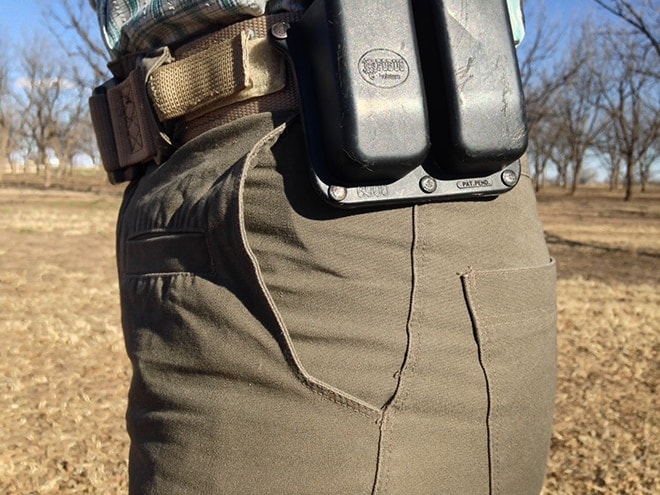 The button feature is where these pants disappoint in comparison to the competition.  It’s a little embarrassing to admit the stud-style button, which had been secured with a Chicago screw attachment, pulled right through on the first wearing.  But, perhaps I shouldn’t complain—it was a cold and snowy weekend, and I’d tucked into the pants no less than a pair of long johns, a turtleneck, and two thick sweaters.  I suppose something had to give.  A snap would be better. 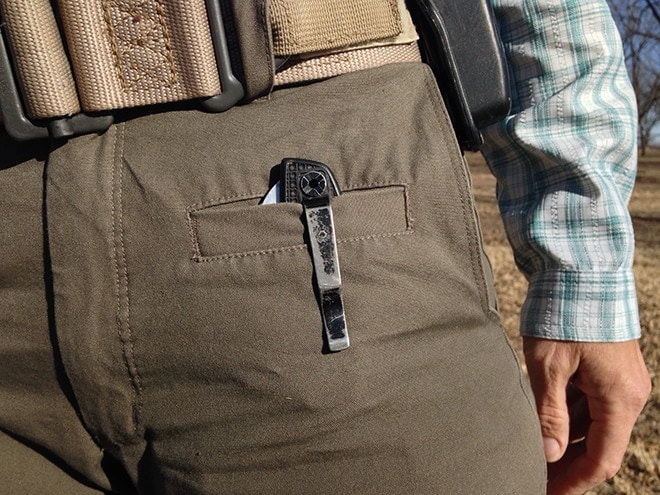 The cargo, front slash pockets, and front pen pocket are generously sized, and the hook-and-loop attachments on the cargo pockets have held up well after a few washings.  The rear patch pockets are smaller than other pants of this genre, jeans-style, open, with no hook/loop material.  I’ve come to like this, as the pockets are easy to drop a magazine into and they lend a look that helps me transition from meetings in town to training on the range without having to change pants.  The only thing I’d change is the white lining of the front slash pockets.  It shows when the hip joint is flexed to 90 degrees, and the material feels thin and not durable.

LA Police Gear was kind to the folks who don’t like helping out with advertising as they go through life.  The LAPG logo tag, subtle enough but present on the right cargo pocket, is “tacked” on with fairly large stitches, and is advertised as being removable. 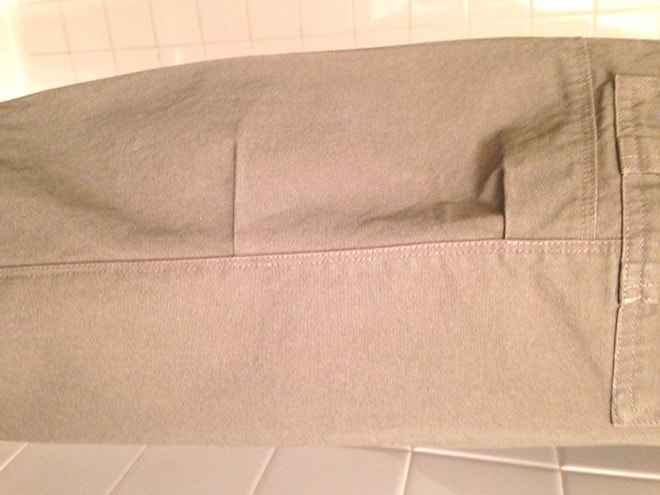 The pants are machine washable/dryable, and haven’t shrunk after several cleaning cycles.  The fabric doesn’t respond very well to an iron, so people who want the pressed look will need to break out the starch.  The photo accompanying this article which shows the pants hanging up was taken just after a steam ironing.  They come out better than sloppy, but not sharp.

No gloss is present on the finish of these pants—a trait I like.  They’re breathable and lighter weight than most competitors’ pants and are a good choice for summer.

LA Police Gear Urban Recon pants are a good alternative to more pricey tactical choices.  The materials and construction are comparatively compromised in some places, but acceptable.  The fit, for this writer, is better in terms of flexibility for range work and keeping shirts tucked in.  Color and size choices are numerous.  Oh, and they look pretty nice too.  For about half the price or less than most tactical pants, they represent a good value.