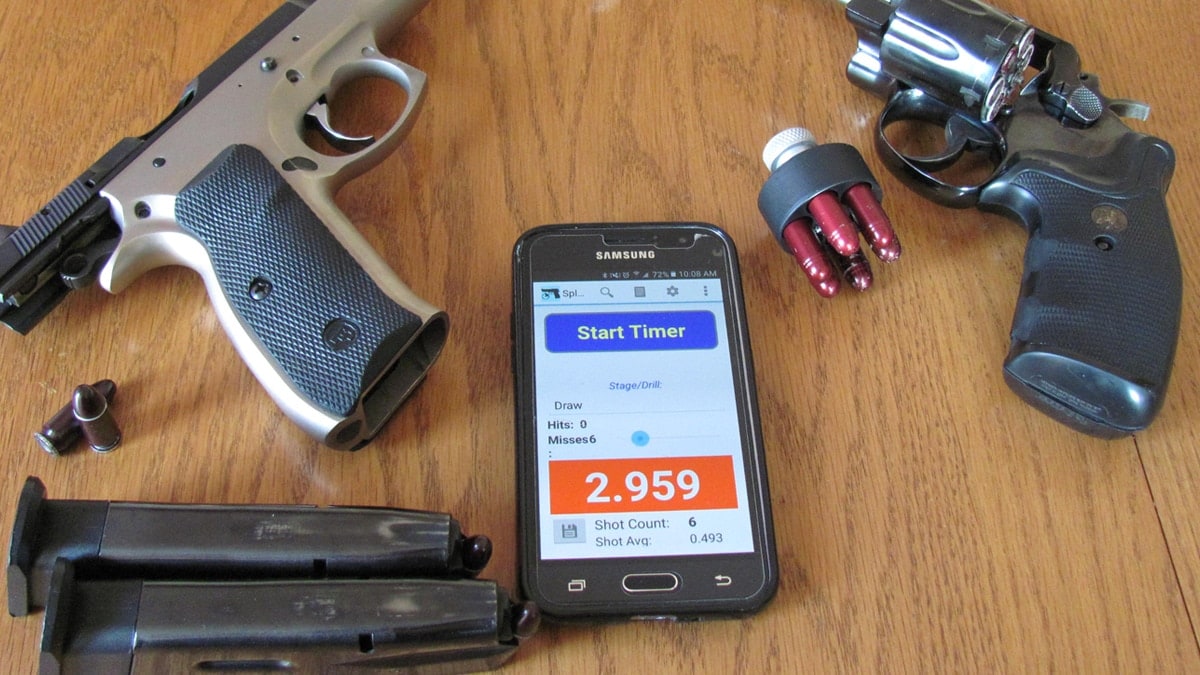 I wrote an article some time ago espousing the benefits of owning a shot timer and I stand behind that sentiment. They’re a wonderful tool for all kinds of shooters and you get a lot of value out of a one-time investment. But not everyone is interested in spending money on a niche tool. Fortunately, today most people are carrying a mobile phone that can also function as a shot timer. I initially decided to try these apps out as I wanted a shot timer for dry fire, but I figured I might as well compare them to a dedicated shot timer as well, in an effort to see if they could produce good results for considerable savings.

Towards that end, I’ll be reviewing the three highest-rated shot timer apps on the Google Play store as of writing: IPSC Shot Timer, Splits, and PS Timer Lite. All three are free, but just because something is free doesn’t make it worth your time. I tested these apps as tools for use in dry fire training, as well as for use in live-fire exercises indoors and outdoors. We’ll go over each one-by-one discussing features and performance before a final comparison.

For reference, I tested all three apps using the same gun, ammo, and conditions. I used a CZ-75B with handloaded Power Factor 130 9mm ammo in all live fire, and the same pistol for dry fire. I also tested all three with a Smith & Wesson Model 10 in dry-fire. All the apps were tested at the same ranges on the same days, with the phone resting on the bench in front of and below the handgun with the microphone pointed towards the shooter. 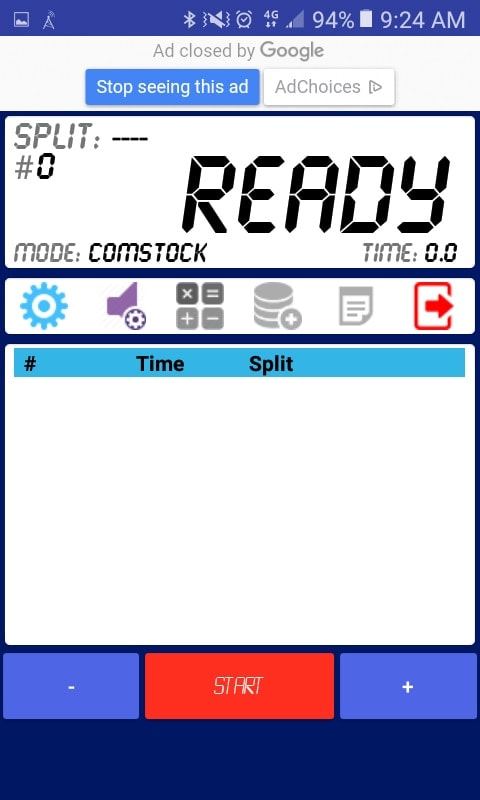 An extremely small program, IPSC Shot Timer (IST) is a no-frills affair. After start up, you’re met with a simple timer screen, start button, options, calibration, and three blanked out features. All three promise to be available in the next version. For now, you can use it as a shot timer with just essentials; you can change its sensitivity to noise, adjust the start beep’s time delay and randomization, and an echo delay (preventing the time from picking up echoes as shots). You can also set your preferred scoring method of Comstock, Virginia, and Par Time.

In dry fire, IST is a great program. A quick auto-calibration and you should be good to go. It picks up the click of your gun well and provides accurate times. The Par Time feature is very useful for testing yourself on common dry-fire drills. Combined with it’s simple and clean interface, and IST gets a big thumbs-up for a dry fire tool.

In live fire, things fell apart both indoors and outside. The automatic calibration never worked well; it usually set its threshold setting to about 255, where it would consistently fail to pick up gunfire. In most magazines while testing it with the automatic calibration, it would register just under half of all shots. After a good deal of this failure, I tried some other tricks like positioning the phone differently so the mic would be elsewhere — to no avail.

When I set up the threshold manually, I found a setting near 200 worked well for pistol fire and would at least register every shot. But at that level of sensitivity, there was no way to prevent echoes from registering without raising the echo delay to the full half-second. Even I have better splits than that sometimes, so I can’t call this success.

Ultimately, I find the IST to be a great no-frills dry fire aid but questionable in live fire. You have to manually calibrate it, then differentiate the echoes from the actual shots yourself or deal with poor shot registration. Between these issues and the total absence of record keeping, I’d duck IST in live-fire. 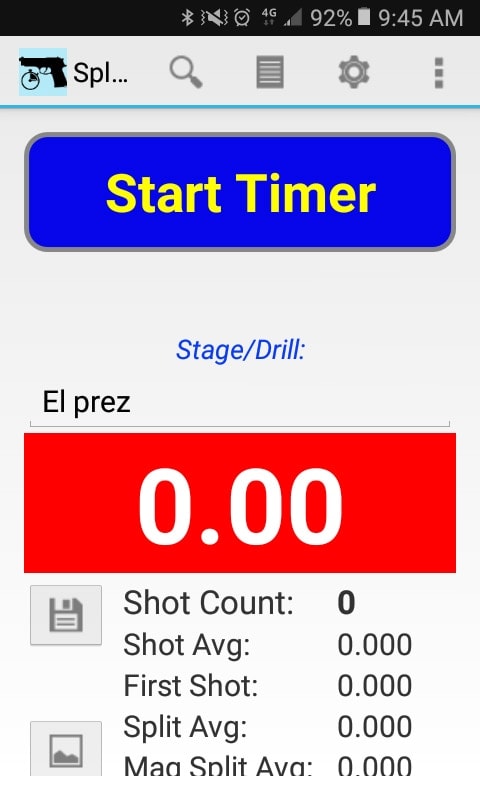 Splits shares IST’s basic presentation but has a lot more features. The interface isn’t super-intuitive, but after you figure out what everything does, pretty much all the features are useful and easy to adjust. For starters, it functions as a shot timer. It offers no automatic calibration, but a pair of sliders always accessible at the main screen provide you with access to those settings. There’s a sizable amount of help information on the main screen you can access by just scrolling down, which doesn’t help aesthetically but is useful. After you find setting you like, I recommend keeping a screenshot to remind yourself where you want them if you prefer different settings in dry-fire and live-fire.

Particularly impressive with Splits is that it allows you to fire a string, then adjust the Shot Intensity Range and it will dynamically change the values in your string. If you set the intensity range as narrow as possible, fire five times, and it only registers two, you can then slide the intensity range towards ‘wider’ until you see five shots — and if you see more, then you’re getting ambient noises (like brass bouncing). Adjust the slider until you know only your gunfire is registering, and away you go. Very handy!

Conversely, Splits doesn’t dynamically display its findings. So, as you’re shooting, you don’t see the time of the last shot. This doesn’t make any real difference when actually shooting, especially given the above feature for adjusting its sensitivity.

But beyond functioning as a timer, Splits stands out in its ability to record data for you.  You can create stages in the program and it will record your performance each time you shoot it, keeping a good log on basic stats like average split time, overall time, hits vs misses, and some other stuff. It’s all very useful for those with a serious interest in tracking their performance, and you can even have it presented as a graph! This is an outstanding feature to have included in a free app.

For dry fire, Splits works well with the sensitivity turned all the way up. It’s superb for practicing with a part-timer, and over time if you’re training right you can actually track your performance — all on one piece of software.

With live fire, after my experience with IST I wasn’t expecting much but Splits works amazingly. I had minor issues indoors, but those were mostly related to trying to appropriately adjust the echo delay. But it worked consistently, registered my shots, and was quite accurate. It’s not as good as a designated shot timer, but it’s free. With the ability to adjust the slider for sensitivity after firing a string to get the appropriate number of shots, you don’t have to waste and time or ammo trying to calibrate.

All considered, Splits is a fantastic program that does everything it should and much more. 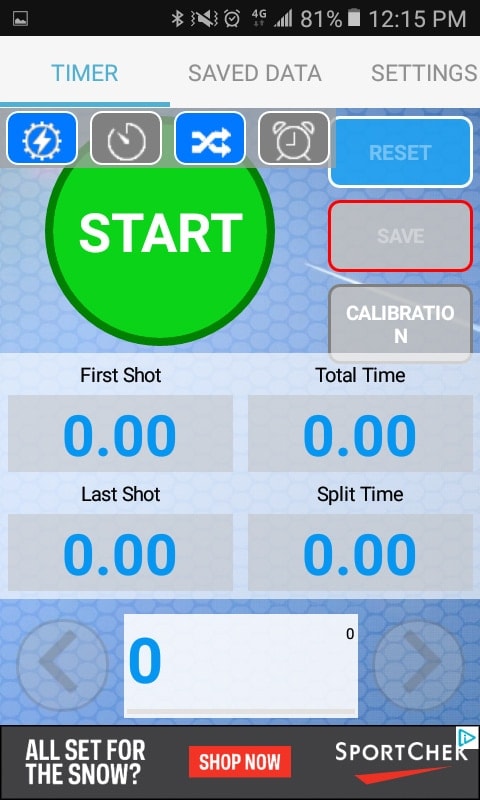 Here’s Practical Shooting Timer Lite’s main screen. This screenshot is about as much functionality as I ever managed to get out of it.

When I started up Practical Shooting Timer Lite (PSTL), I noted it looked like it had similar features to Splits. In addition to the basics of functioning as a timer, it also appeared to store information on past performance. Great stuff from the looks of it.

Unfortunately, this is going to be a very short review as PSTL absolutely never worked for me properly. Whether in dry fire or live fire, it would miss shots — sometimes to a hilarious degree. It’s much worse with live fire than dry fire. In dry fire, it will come close to registering 50 percent of trigger pulls. With live fire, it averaged under 20 percent, regardless of conditions or settings. It was functioning so poorly initially that I spent a bunch of time hunting through PSTL and my phone’s options to see if something was amiss with permissions or maybe even a broken microphone, but in the end, everything was set up properly and worked fine except PSTL. I installed this on another phone and tried it with the same results — poor functionality.

Also, worth noting is this is the only app I used that crashed during testing. So, regardless of the features it may boast, none of them matter if it won’t work as a timer.

After testing all three, Splits is the clear-cut winner here. IST is a fine lightweight dry fire practice timer, but given Splits offers the same functionality plus record keeping, I can’t see reason to use it. The only category where I preferred another program to Splits was with IPSC Shot Timer in basic interface. Otherwise, in accuracy, features, and function, Splits reigns supreme.

Compared to my actual shot timer, Splits is also easier to use in many ways. It has a far better interface and more record-keeping features. Is it as accurate? No. You’ll still drop a shot occasionally, or the program will seem to get confused on what is and isn’t gunfire. Splits is no substitute for a shot timer if you’re a range officer or something similar, but for casual use, I highly recommend Splits. It’s a fantastic program.