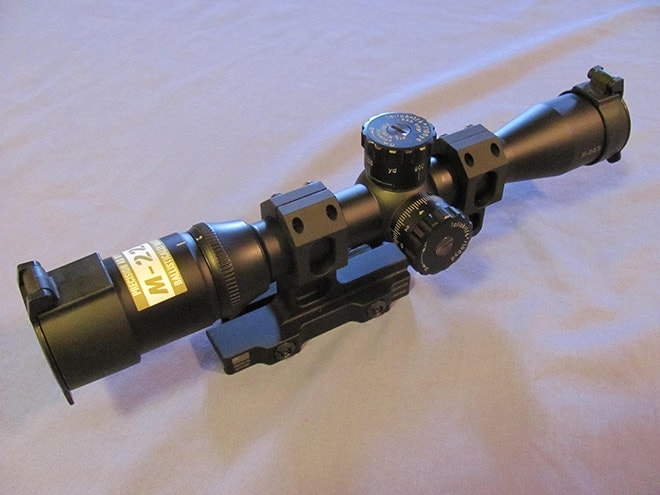 This is the reaction my Nikon M-223 scope got from a soldier I was shooting a Service Rifle match with when he noticed the brand. It’s true that in the gun community, Nikon is generally not looked at as a major competitor in the rifle optics department. For now, they’re still a bit of a well-kept secret that I’m doing my best to spoil. To help get the word out, the M-223 2-8×32 riflescope can serve as a fine specimen of the Nikon brand. 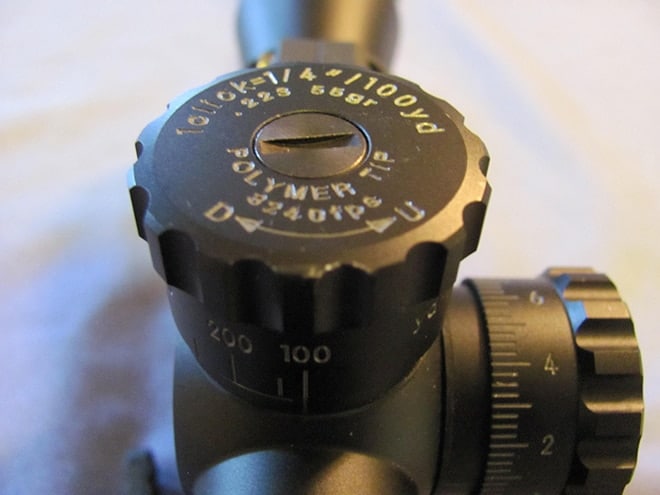 The M-223/308 line of riflescopes is Nikon’s line of entries into the “tactical” optics market. All of these scopes share some key features like ¼ MOA adjustable turrets, return to zero features, and 4” eye relief. Beyond that, there’s a broad range of models available with different objective diameters, levels of magnification, and reticle types.

I was told about the Nikon M-223s by a friend while I was shopping for an AR optic and I was mostly interested because these optics claimed to offer features available on scopes that were selling for hundreds of dollars more at the low end. While I am normally suspicious of cheaper riflescopes—costs are always cut somewhere—I trusted my friends recommendation and went ahead with an M-223 2-8×32 scope with a “Nikoplex” reticle. This is the least cluttered reticle available in a zoom level I found appealing, while offering a good compromise on bulk. 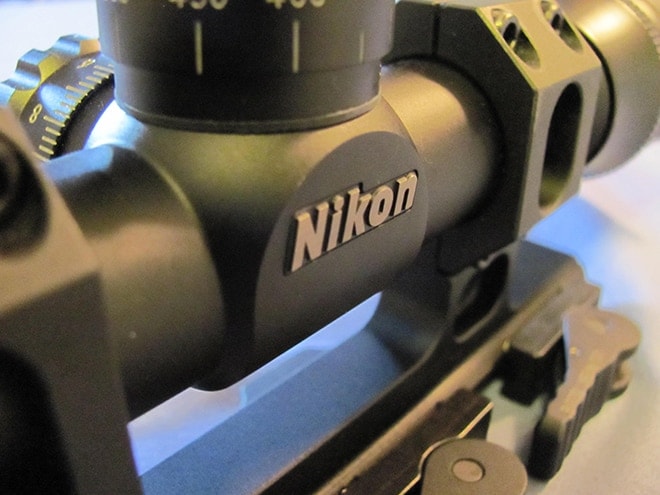 By the time the optic showed up at my door, I had paid just over $300 for it. It arrived in a box with some scope caps, a cleaning rag, and instructions. At 11.5 inches and just under one pound, this isn’t a lightweight optic, but it is reasonably sized for what it offers. It has a 1-inch tube and a 32mm objective lens. The whole affair is quite nicely finished in matte black, some with silver detailing and branding. The turrets are big and clearly labelled. All in all, it certainly looks and feels the part of a rugged AR optic. 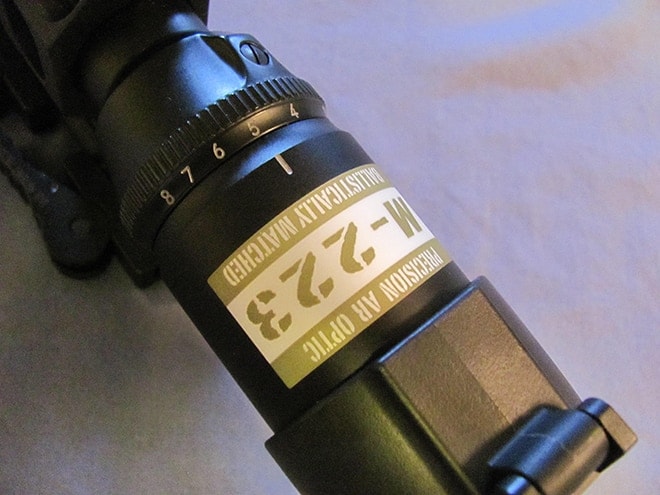 Controls for adjusting the M-223 further inspire confidence. The zoom adjustment has a knob protruding from it’s dial that gloved or wet hands can easily find when needed. The turrets have fairly-sized distance markers and are available in a variety intended for use in 223 and 308 rifles. These have superb positive clicks on movement and when you’re done spinning them, they stay put. After adjusting them, pulling the knob upwards allows you to easily reset the zero as desired. 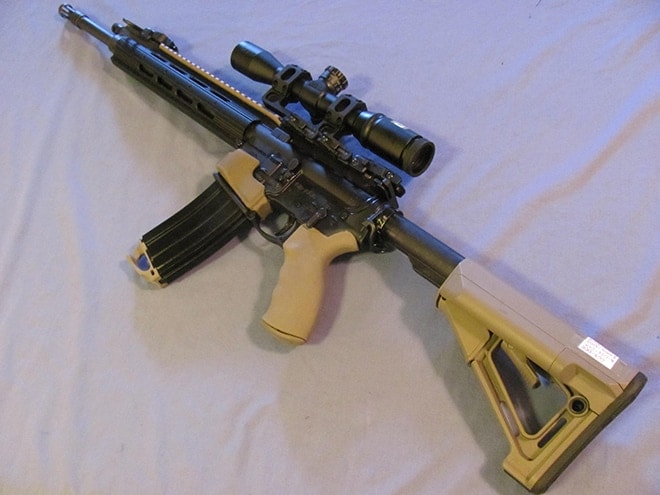 My scope didn’t come with a base, but one designed specifically for these is available from Nikon. I’ve mounted mine in an American Defense Manufacturing cantilever quick-release mount on my AR, and in some traditional Weaver rings on a bolt-action rifle during use. One inch tube mounts are a bit less common than 30mm mounts, but with a little patience you should be able to track down exactly what you want.

I’ll admit I was impressed by the scope on first handling it, especially for the price. My initial impressions of quality have thankfully been validated by my extensive range time with this optic. 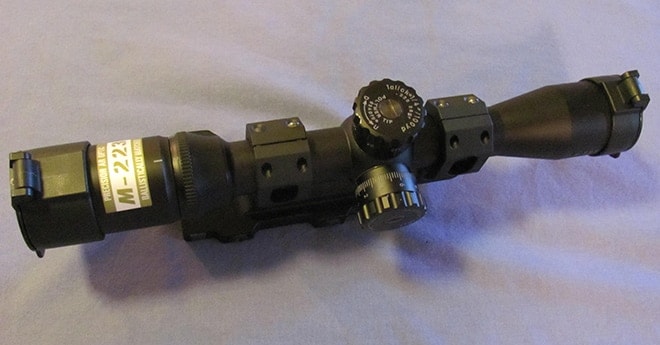 Over 11″ long and almost one pound, this is not a lightweight optic, though light for what it promises. (Photo: Andy C)

When I first started using the M-223, I was not blown away by the quality of the glass. While at the lower magnifications the image is quite clear, at the high-end of the available range, the edges of the image get fuzzy and the view simply isn’t as clear as some other optics I’ve used. But considering what I paid for the Nikon, I think it’s a fair tradeoff. Sure, the image quality isn’t as nice as my Leupold hunting scope—but that scope costs twice as much and has half the features.

If you’re going to stay inside 300 yards, I don’t think it’s fair to complain much about the image quality the scope offers unless you’re extremely picky. I think the type of shooting this scope excels at is the type you see in 3-Gun matches or action rifle shooting, where your time to aim is limited so there’s a diminishing return on super-high image quality and heavy zoom. The glass of the M-223 is certainly good, just shy of great. 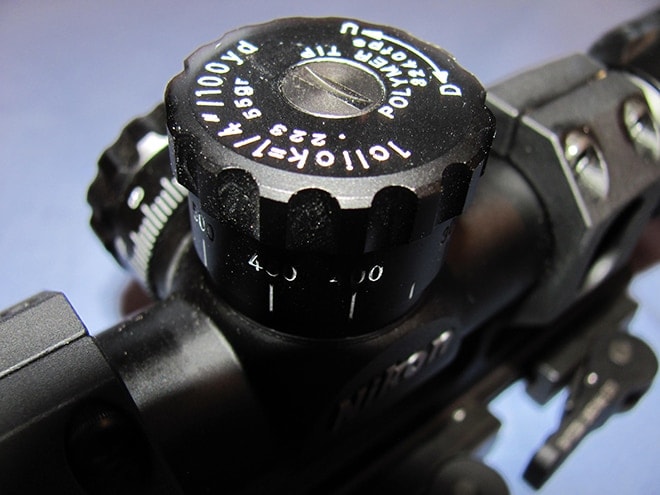 Adjustments are very easy on this scope, even with gloves on, making it suitable for 3-gun matches. (Photo: Andy C)

Comparing its image quality to similarly-priced, competing offerings from Burris, Redfield, and Vortex that I either owned or tested, I have to say the Nikon excels. In direct comparison to other optics with similar features and zoom in the $250-$400 range, I would coarsely say the Nikon performs better than just about any of it’s competitors. The image tends to be clearer and sharper while offering better eye relief. I’m partial to my Redfield Battlezone in particular, but I think the M-223 2-8×32 is a better deal in the end.

I also like the “Nikoplex” reticle. It seems to be getting more and more difficult to purchase quality riflescopes with “tactical” features that don’t have some cluttered reticle with various “shooting aids” on them to obstruct your view. The Nikoplex keeps it simple. It shows up well with a rust-coloured tint against just about any background and lets you take a shot and see what you’re doing. If you like the “shooting aids”, there’s a version of the M-223 with that type of reticle as well. 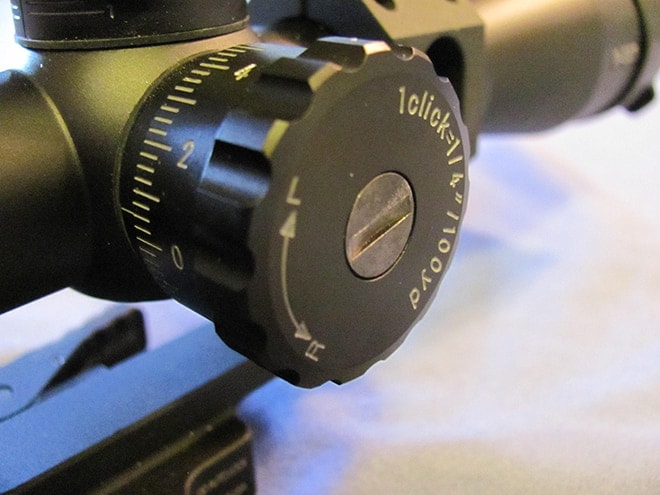 So, glass aside, once I zeroed this scope at 50 yards, I then found my 100-yard zero and settings needed beyond that at 100-yard intervals, out to 500. Using the same ammunition and mount, I did this zero about eighteen months back. The last time I shot the rifle about a week ago at these ranges, it still shoots where I’m aiming at all ranges. While some of the credit must go to the mount, I’d say that qualifies the statement that my M-223 “holds zero” adequately. I have been running at full-speed with this rifle, diving to the ground, shooting off barricades, and essentially subjected the scope to all the “routine” shocks a scope on a rifle might be expected to be exposed to. The zero has remained unphased. About 3000 rounds of ammo have not disturbed it either. Overall I’m very satisfied with the repeatability.

When shooting at varied ranges under the pressure of the timer or limited target exposures, the ability to quickly adjust the turrets is important. Here the Nikon scope delivers. Each ¼ MOA adjustment is very positive and noticeable when turned, even when I’m a bit winded and sweating or wearing gloves and freezing. 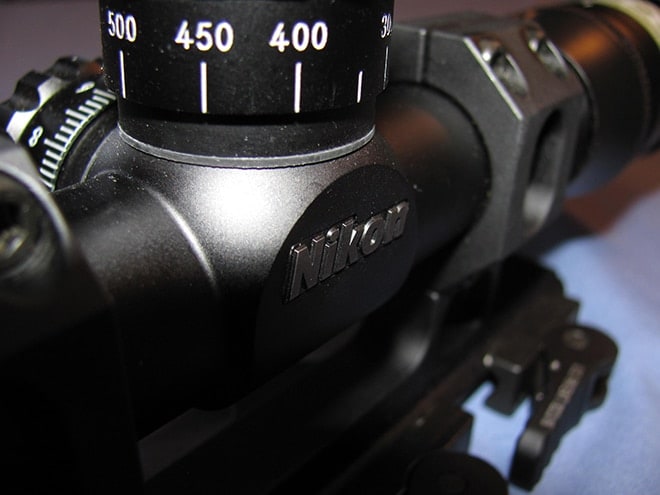 Turrets allow users to sight scopes out to 500 yards, though be advised the hash marks do not line up perfectly. (Photo: Andy C)

The only “issues”—if you can call them such—with the turrets is that the hash marks on it don’t line up perfectly with the adjustment line (my actual adjustment sits just to the right of the line), and that the numbers on the turrets are pretty much meaningless. Given the broad range of ammunition and rifle specs a .223/5.56 or .308 rifle can digest, this is hardly a major issue. I wrote down where I need to adjust my sights on my rifle stock and have used this system ever since. Just don’t expect to be banging targets at 200 yards immediately because you’ve zeroed at 50 and you’ve turned the dial to 200.

The only other real element of the scope is the flip-up caps, which are passable for storage but will inevitably fall off if you spend any time running around with them on. They’re fine for what they are. If you want some more stable, “Combat-ready” covers, I’d recommend buying something sturdier. 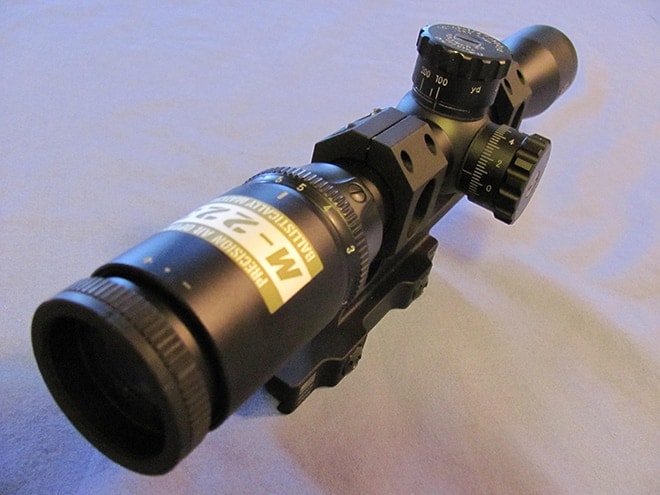 I do not hesitate recommending this riflescope to any shooter at such a low price. (Photo: Andy C)

In terms of longevity and durability, I have had the misfortune of having to use this optic in pouring rain and freezing cold with snow. Neither gave the optic any issue, so the weatherproofing that all modern optics brag about on their boxes but sometimes fail to deliver on is actually working here. There’s no special maintenance and the scope still looks and functions as well as the day I bought it.

You have probably figured out that I’m quite impressed by this optic if you’ve read everything up to this point. There just isn’t much negative I can say about it. This is a budget-friendly optic offering big-money features with good glass that has performed very well in use.

Are more expensive optics often nicer? Absolutely. But I think the M-223 sits at a sweet spot on the curve of money spent versus quality of product. I think it’s on the high end of where you start to see rapidly diminishing returns, especially for action shooters looking for something to get in the game without breaking the bank (though it’s a fine hunting optic too!). You can spend a lot more on a riflescope and barely get more than this offers.

For the money, I think the M-223 is one of the best tactical scopes on the market. I recommend it without reservation.