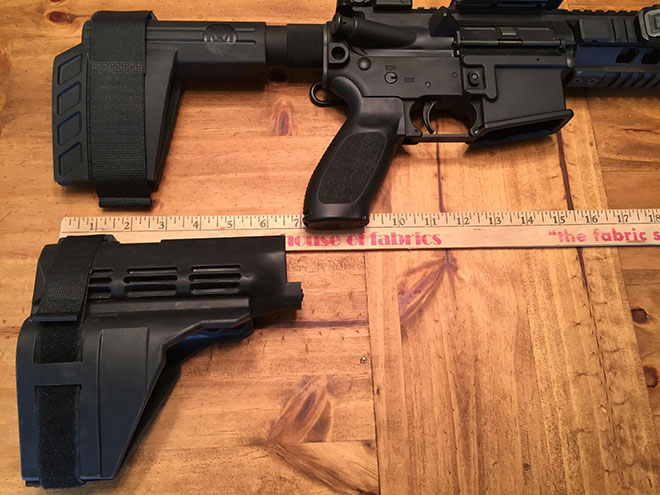 S-B Tactical makes a series of replacement braces/stocks for modern sporting arms. We had the chance to test their low-profile SBX-K pistol brace on a Sig Sauer 516, which I believe is the CQB model of several variations on the 516 theme. After some confusion between the manufacturer’s messages about the product versus what we had in hand, it turned out to be a nice upgrade. 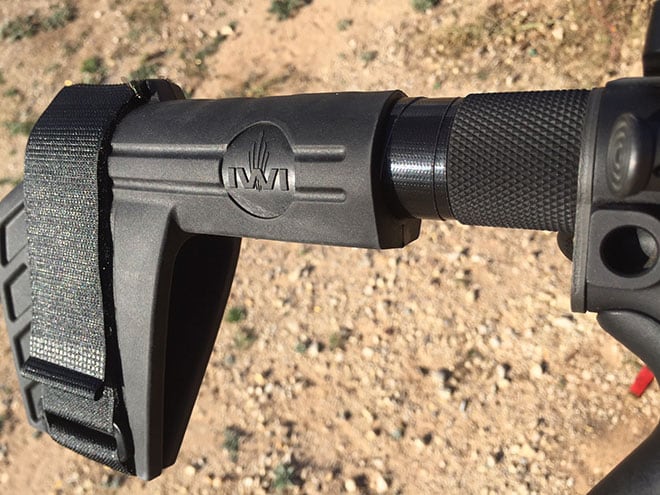 The IWI branding was a little confusing. It’s not on newer models. (Photo: Team HB)

The brace — or stock, as is natural but politically incorrect to say — arrived packaged in an upscale-looking black box.  Inside, the stock was inside a Ziploc bag, carefully wrapped in fancy paper and accompanied by the obligatory copy of the ATF letter declaring the device to be legal when used as a brace for single-handed shooting, especially for people with mobility issues. No instructions were included.

Branding was a little confusing, as the brace has S-B Tactical’s stamp subtly featured on the posterior. More obvious, stamped on the buffer tube part, is the Israeli Weapons Industries logo. The S-B rep said the IWI logo has since been removed; the one sent for testing is from an earlier product run. 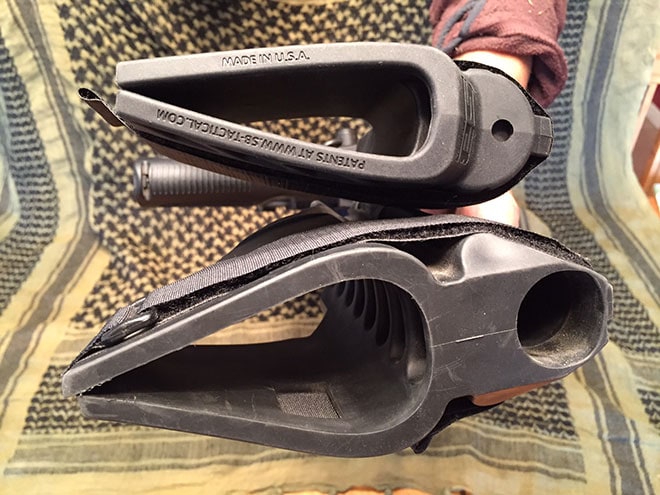 Being adventurous, we proceeded to pull the original 516 brace off without consulting the manufacturer’s website or YouTube.  If no instructions are included, installation must be obvious, right?  This wouldn’t be the first time that approach has led to more trouble than not. I take an enthusiastic consumer’s approach to product testing.

A problem presented itself.  The “male” end of the buffer tube was the same on both the S-B brace and the Sig once the Sig brace was removed.  There was no obvious way to install.  Off to the internet I finally went, finding a video that added to the confusion.  There, the brace that looked the same contained no buffer tube and simply slipped over that which was already on the rifle — er, AR pistol. 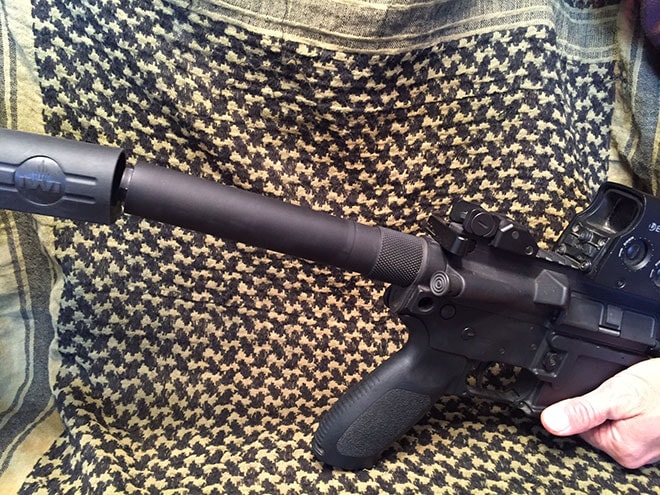 I pulled, twisted, and pulled some more on the tube inside the new brace.  There was no budging of the “pre-installed, non-functioning buffer tube,” as it’s described on the S-B website.   Embarrassed, I contacted the company rep for help.  They advised the stock is no longer shipped with the tube.  The product listing still says it includes a tube, though S-B’s video instruction conflicts with this. 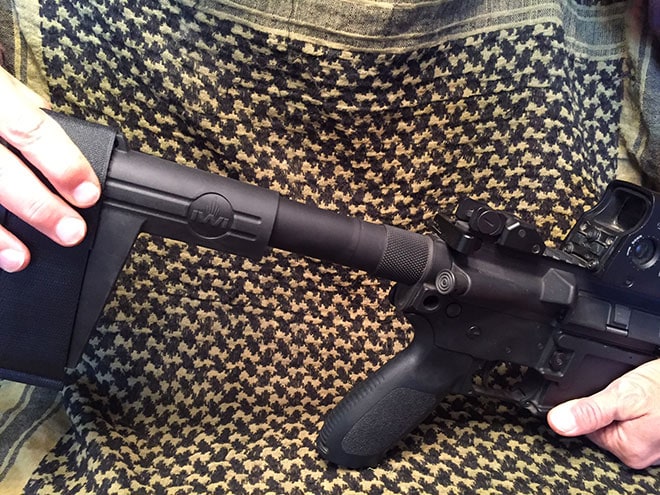 A little later, I picked up the brace again, and for whatever reason — temperature change or maybe having loosened it earlier without realizing it — the brace slid right off. Now we could get to work.

The company does advise that buffer tubes come in various diameters and that a tape wrap may be needed to ensure a good fit.  Such was the case here.  A few spirals of Gorilla Tape around the tube took care of the loose brace issue, in fact now it’s so tight, it’s nigh impossible to move or remove.  Without the tape, the brace would rotate in a most annoying fashion, and likely would’ve slipped off during field use. 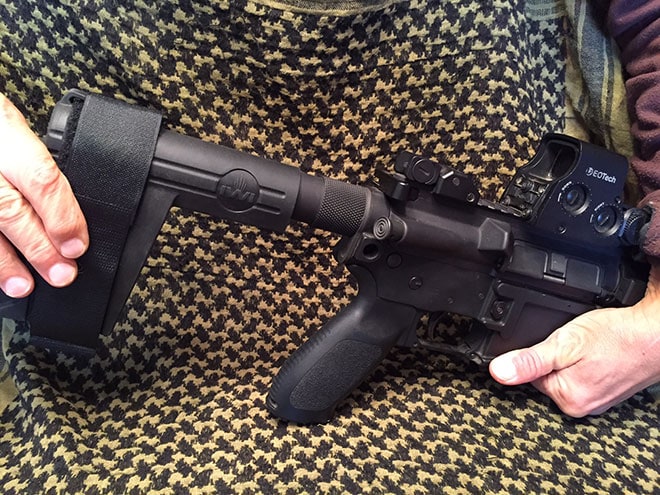 …once I was able to remove the extra buffer tube.
(Photo: Team HB)

For those looking for a tad more length of pull — er, grip length — this brace adds half an inch to the original length.  It leaves more tube exposed between brace and frame.

The additional length is offset by a substantially slimmer and simpler profile.  The SBX-K has an L-shape and is about an inch less in width at the butt end than Sig’s brace.  The firearm in this test is a dedicated truck gun, and the owner really likes how the thinner profile has less bulk than the original.

Ideally, the length of attachment would be adjustable, so that less buffer tube is exposed if the user desires.  But as it is, this is a more attractive and thinner setup than the original.

S-B Tactical’s product videos show the ATF-approved, company-recommended ways to use the brace in AR pistol mode. We tried them out. 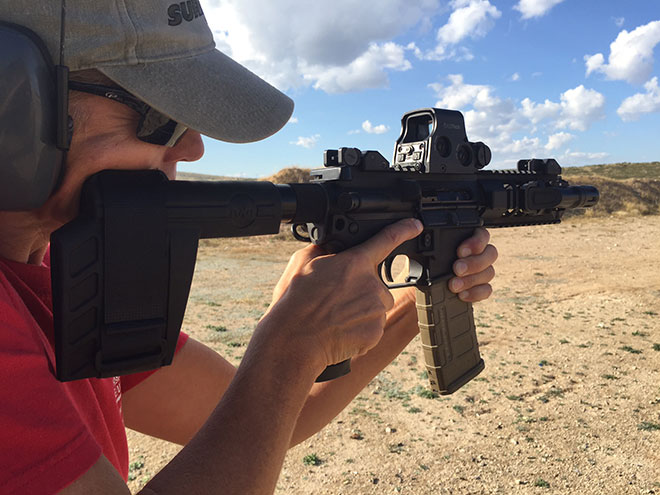 The cheek-rest method is good for one accurate hit, then recoil unseats the brace. (Photo: Team HB)

Before embarking on this discussion, readers should know that I share the opinion of most sensible rifleman, in that the pistol-versus-short barreled rifle rule is nonsensical. Making people who haven’t spent money on an SBR registration wield a rifle like a too-long pistol contributes to poor technique and can open doors to unsafe gun handling and irresponsible shot placement.

The first technique is to plant the brace end on one’s face in a cheek weld. To me, this is the best choice of the three methods for making one accurate shot, though it would be entirely unstable without use of a forward rest or support hand on the forend. Recoil happens in a rather unsupported fashion, though, making accurate follow-up shots slow to place. 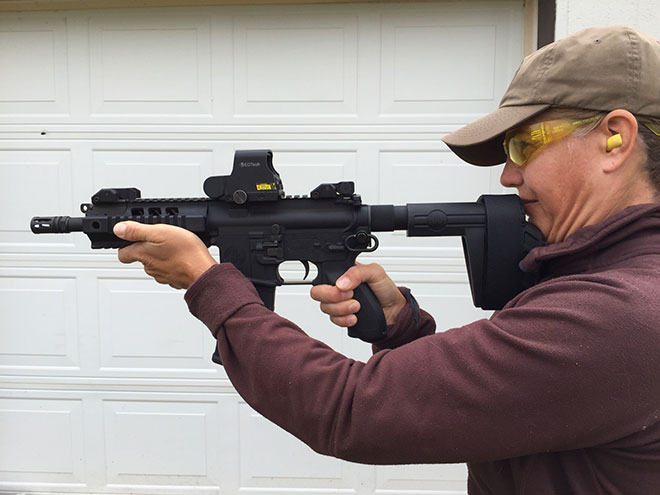 Another technique I’d not seen before watching S-B’s videos is to rest the brace against the sternum.  Though recoil management would be better this way, there’s no way to get a sight picture, even with the fairly high-mounted EOTech optic that’s currently on the firearm.  Ammo isn’t free, so I decided not to waste any playing point and shoot.

The third technique, described in the ATF letter, is to use the adjustable hook and loop strap to secure the gun over one’s forearm. With a wrist injury that’s apparently going chronic, I was unable to hold the gun at arm’s length for more than a couple seconds. Why anyone would even want to shoot from this inaccurate position, other than posturing for a video promoting gang violence, is beyond me. Shooting from the hip, with elbow braced on my side, would work.  Again, that’s a waste of ammunition for a real shooter who wishes to place shots in a controlled area. 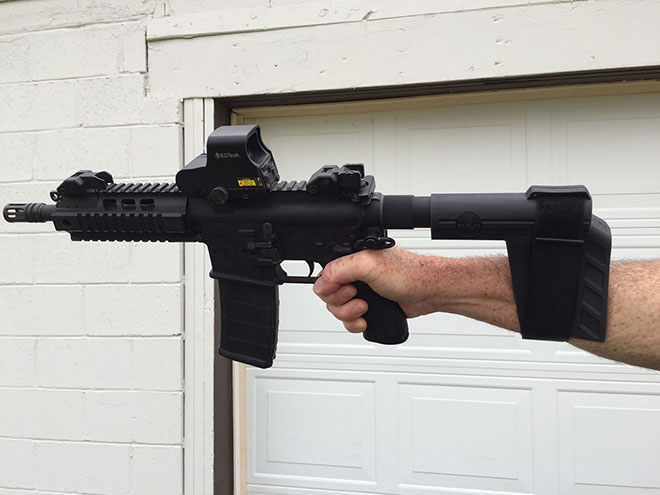 The safe and responsible way to use this brace is with a proper shoulder mount. Fired in that way, the brace would work safely and comfortably. Unfortunately, that requires a license I don’t possess when the brace is mounted on this AR-style pistol.

This brace is durable, attractive, and a definite upgrade in practicality and looks from Sig Sauer’s original. S-B Tactical has done a nice job with design. Their product information needs to be updated online to reflect this. A simple paper insert with installation instructions would be helpful too. It’s a nice brace, but overpriced. I’d not shell out $149.99 for advantages that don’t contribute to better shooting.

It’s a shame that nice products like this are subject to asinine regulations that truly reveal the agenda of gun legislation — to restrict consumer choices and privacy while filling a bureau-controlled till. Gun control advocates like to use the word “safety,” but the legislation they support often contributes to unnecessary or unsafe gun handling.