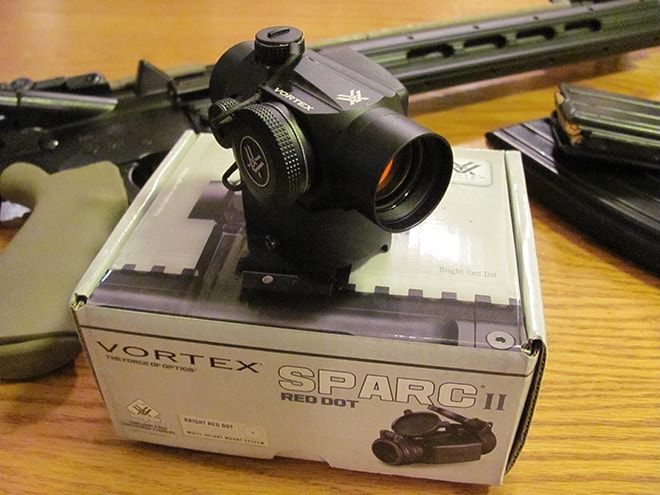 Red dots are showing up everywhere these days. These little electronic contraptions are getting mounted onto rifles, shotguns, and handguns and for good reason—they’re easier to use than iron sights. Consider also that many of the platforms that use irons will never be shot seriously at targets beyond 100 yards and it comes as no surprise that many folks have realized that in many circumstances the speed and ease of use of a red dot outweighs even the precision of a traditional magnified scope. 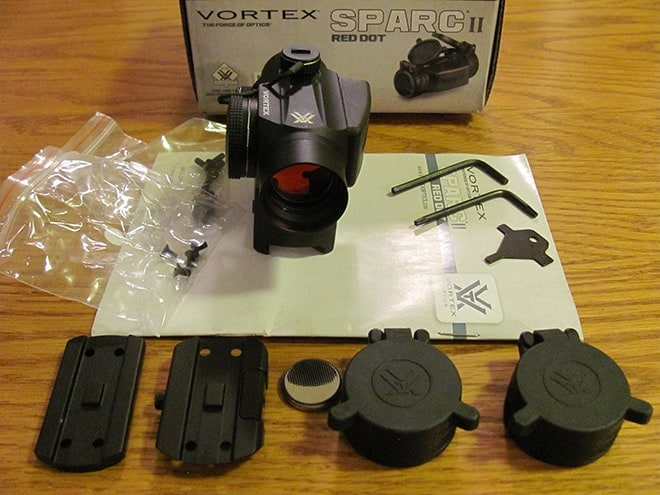 The market has responded to this technology’s popularity by providing long gun owners with a wide range of options with price tags from as little as $30 to as much as $700.  This disparity could tell you that, right now, you can buy something that will fall apart in ten shots or something that will survive atmospheric re-entry. I think most shooters are looking for something in the middle—a sweet spot with craftsmanship and quality, but at a reasonable price ($150 to $300 range).

I think the Vortex SPARC II represents all of these qualities and, in a crowded mid-priced red dot field, stands out as a tremendous value for the money. 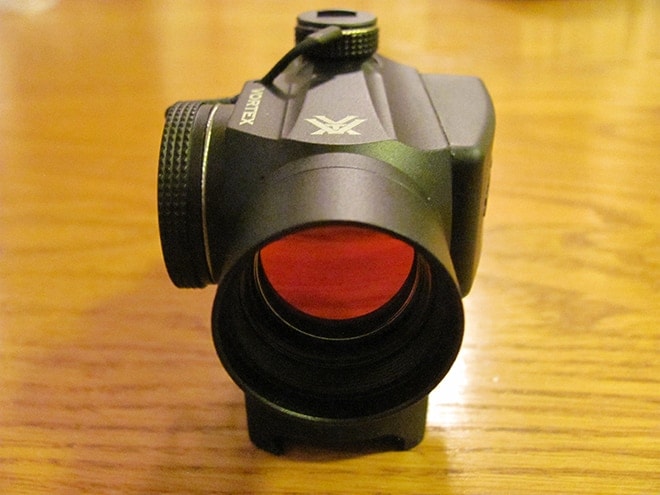 The SPARC (Speed Point Aiming for Rapid Combat) line is Vortex Optics’ compact red dot offering. The SPARC II features some refinements over its predecessor but is a fairly no-frills package. Inside the box you get instructions, a battery, tools, screws, the mount and the sight. Everything is held in Styrofoam cutouts and the box is a fine place to store the optic if it isn’t going to stay on a gun. 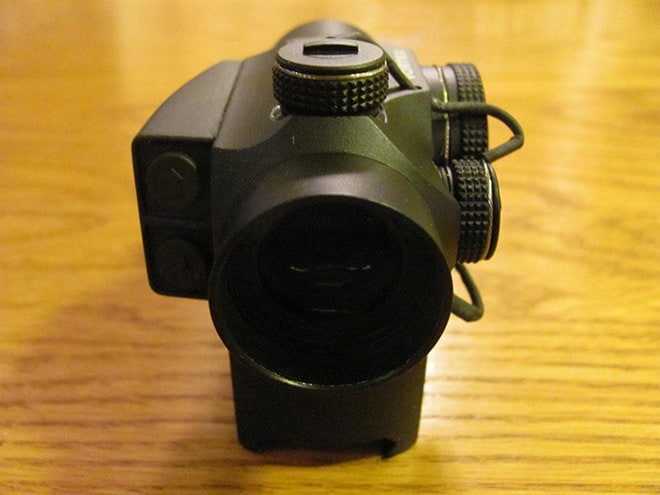 Weighing in at about a third of a pound and measuring 3.1 inches long, this sight can comfortably sit on top of just about any long gun without a significant impact on handling characteristics. It projects a 2 MOA dot at ten intensity settings, with the bottom two being designed for use with nightvision. The SPARC II runs on a single CR 2032 battery with a reported life of 300 hours at the maximum setting. To save on batteries, it shuts itself down after twelve hours with no interaction with its controls. The lenses are covered by a pair of flip-up caps. 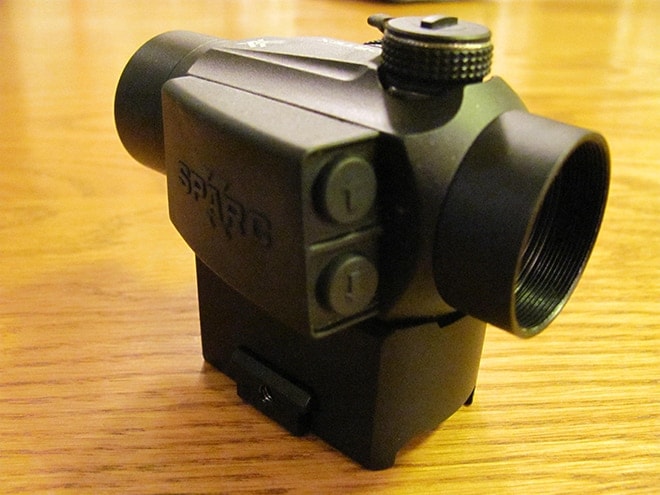 Worth noting is Vortex’s superb customer service. They call it their V.I.P. (Very Important Promise) Warranty. If something goes wrong with your product, they will repair or replace it for free.  I have used Vortex’s customer service for a second-hand purchase I made once where a person sold me a defective SPARC first model. I simply contacted Vortex and they sent me a new SPARC II within a week, shipping paid, no hassle. This is customer service that you can count on, and that figures into my decisions when buying a product. 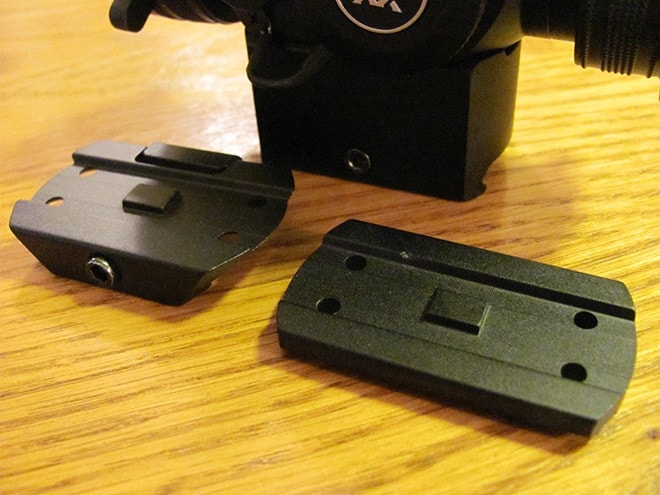 I’ve used my SPARC II primarily on an AR-15 for multiple disciplines of competition shooting, as well as sitting it on a lever rifle during hunting season. This sight has seen two years of constant use and thousands of rounds fired from weapons it’s mounted on with recoil varying from .22 LR to .30-06 Springfield. In all conditions—ranging from an indoor range to hot open air of a summer 3-Gun course to the frigid cold of Service Rifle matches in March—this sight has performed admirably. 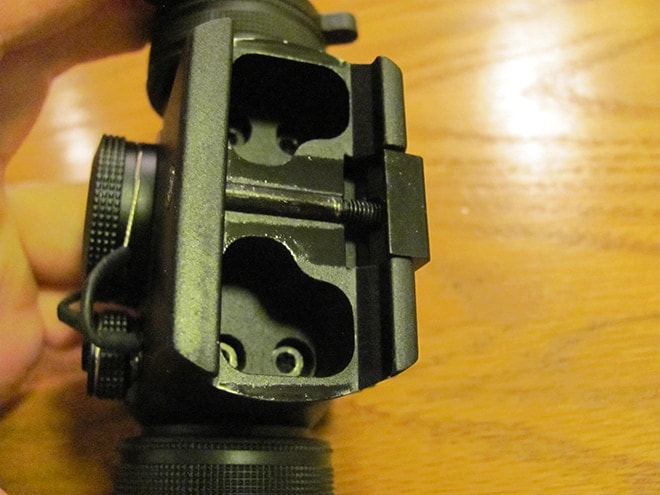 The controls are easily accessible, with everything you need at hand on two rear-facing buttons that adjust the brightness of the dot up or down. The ‘up’ button also doubles as the on/off button. The buttons are rubber-covered and provide a good positive click with each push. The elevation and windage adjustment knobs are covered by screw-on caps. When threaded in place these are super-secure and have never come loose in my experience, but also don’t give me any trouble removing them as their rims are textured to provide good grip. The knobs themselves have a small slot in them allowing screwdriver adjustment, but the covers also have a raised section that cleverly allows you to use them for adjustments as well. The knobs turn with a good positive click, with each click providing just under a 1 M.O.A. adjustment with my rifle and ammunition. 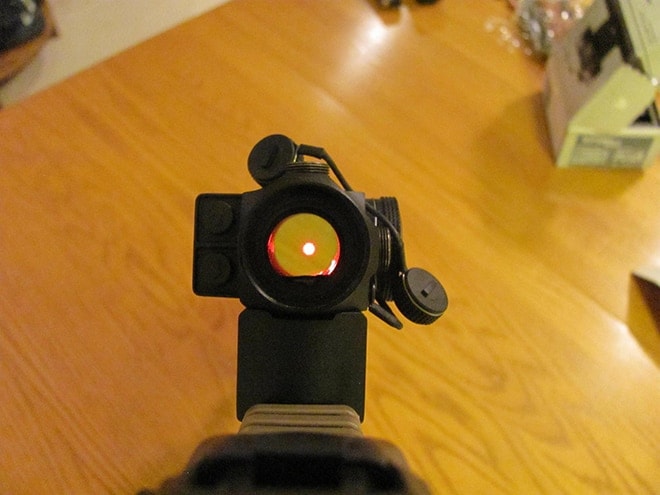 Looking through the sight, the SPARC’s glass isn’t perfect—it does add a very light bluish tint to everything in its field. This is a very subdued effect that had no impact on my shooting. As far as clarity, there’s nothing to complain about here in any condition. The glass has never fogged up or become cloudy, and is perfectly clear. I’ve gotten all types of crud on it and it’s cleaned up fine with a rag. 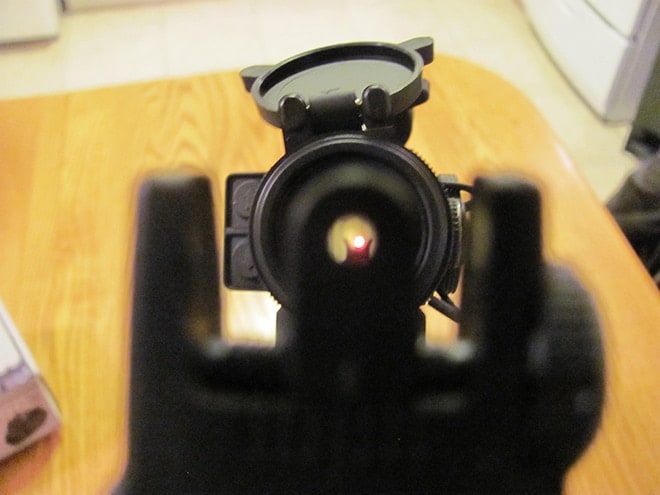 When the dot comes on, it’s quite clear for the most part. I do find it’s not as clear as the higher-end Aimpoints—the dot can be a little distorted, especially at the higher settings. Its outline isn’t perfectly crisp but it’s nowhere near having the ‘double-dot’ phenomenon that others have shown. I find it’s also more distorted with one eye closed but I’m using it with both open, so that’s moot. The reticle is only available in red and can only display as a dot, so if you prefer fancy features like green display or multiple reticles, this isn’t the sight for you. As I like my sights as basic and uncluttered as possible, this doesn’t bother me, though I do understand the utility of a green dot at times. 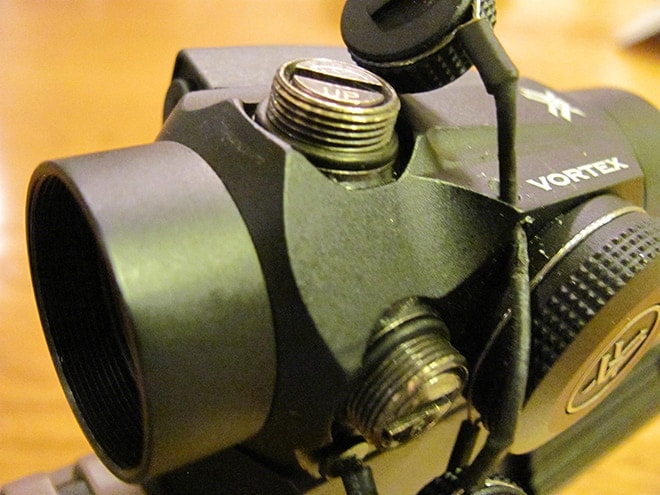 After establishing zero at fifty yards with my AR-15 in early 2012, my SPARC II remained on that rifle for into early 2014 with over four thousands rounds put down the pipe in competition and practice. When I took it off to place it on a hunting rifle (just to try something new), I never adjusted the sight.  To my surprise, it shot exactly as it had the day I zeroed it. I’ve seen so many shooters at the range with similarly-priced electronic sights complaining about their inability to hold zero that it’s made me appreciate the SPARC’s reliability even more.

The SPARC’s two “frills” are the multi-riser base and the caps. They are both plenty functional. The riser base is very handy, with three pieces (a main body and two smaller plates) that allow you to combine them to match the back-up sights your rifle has. If you like a low-profile sight with no gas block or irons, you can put it directly on your rail. It can be set to co-witness absolutely or lower ⅔ if that’s your thing with most iron sights. The mount itself is simple and robust using a quartet of screws to hold everything in place. With some Loctite it will remain sturdy as long as you need it. 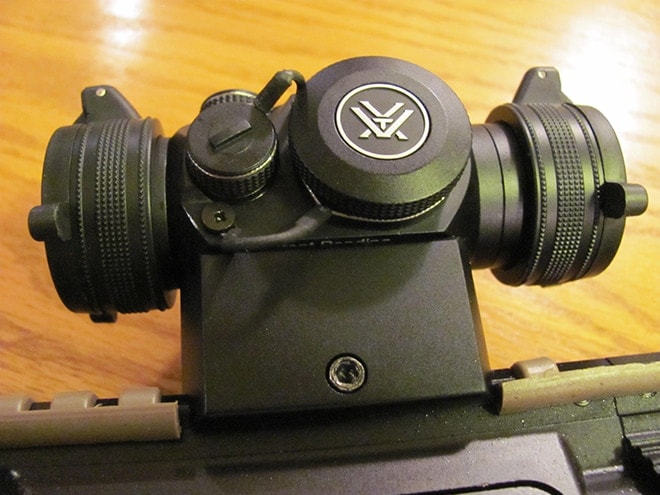 The mount has come on and off for cleaning, but always went back in the same place and the zero never wandered. I periodically tighten the mount’s clamp to the rail when cleaning the rifle but in a day’s worth of shooting, it’s never gotten noticeably loose; that said, I would say if anything is going to cause your rifle to lose zero, it’s going to be this mount before the actual sight. It’s not as secure as my American Defense Manufacturing cantilever mounts, but then it’s not $300 either. If absolute reliability is critical to you, this is one thing I would consider replacing out-of-the-box.

The sight caps are cheap plastic affairs that do their job adequately, but are a bit prone to falling off if the rifle is jarred much, such as when you run with it in a sling. I use them to transport the rifle around but they come off and remain in the case when shooting. 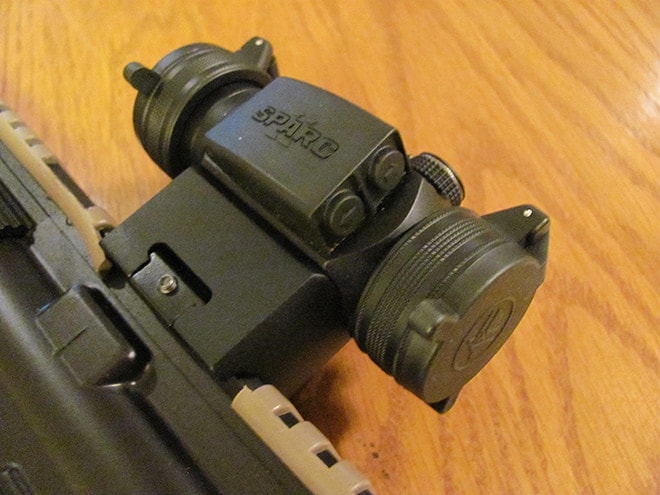 I am very pleased with my Vortex SPARC II having used it extensively. It holds zero, it has a clear dot and glass, and it’s easy to use and maintain. All of this for a very reasonable MSRP of $290, usually running closer to $250 in-store or online. Given Vortex’s impeccable warranty, you can also feel safe buying a used SPARC for even less. It’s become my go-to red dot for all kinds of uses.

For a dedicated personal defense or duty weapon, the SPARC is a bit less suited simply because of the 12-hour shutoff feature. In a stressful situation, I’d rather have something I know will be on all the time so I’m not fumbling for the switch. It would also benefit from a more solid base (which several manufacturers produce). But for a general-purpose sporting red dot at an excellent price, I think the out-of-the-box SPARC II is an absolute winner.