Big bore hunting pistols are all the rage — just consider the myriad offerings debuted to the market over the previous three years, including Glock, Sig Sauer, Ruger, Remington, and now Springfield.  With introduction of the TRP Operator, it would seem Springfield Armory has sat back and taken its time to perfect the longslide 10mm.  Is that so, or is the TRP just another 10mm lost in the growing seas of dollars and calibers? 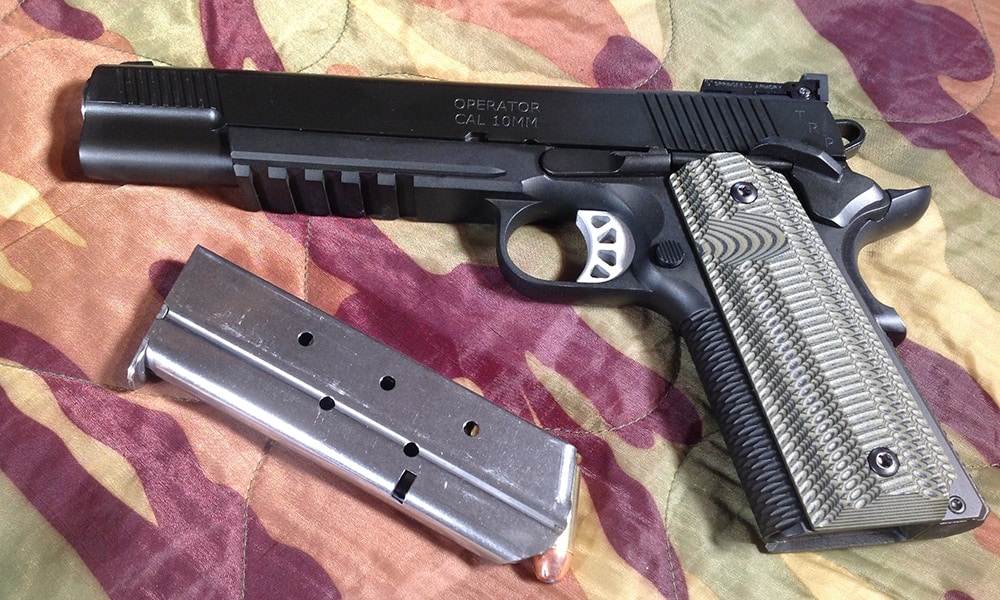 The TRP, which is also available in a 5-inch model, is shown here in the longslide six-inch, a boon for hunters and tacticans alike. (Photo: Kristin Alberts/Guns.com)

Though the Operator TRP name suggests its tactical roots and intent, features point to the TRP being a serious contender with the other longslide hunting pistols.  Here’s what defines the gun.  The 6-inch stainless steel match-grade bull barrel is housed in the forged steel slide.  Measuring a full 9.6-inches long and 5.5-inches in height and weighing 45 ounces empty, the TRP is a solid handful of power.  The fully-supported ramped barrel offers an extra measure of support for the higher-pressures of the 10mm.

Springfield also offers a 5-inch barreled model TRP, our focus here is the 6-inch longslide.  Where the 5-inch version wears a lightweight barrel and a forward bushing standard found on 1911-style arms. The 6-inch version goes off the charts with both a heavy bull barrel and a bushing-less build.  That extra inch of barrel grants significantly greater velocities from the round, with a potential for 50 or more feet-per-second. If that’s not enough, the 6-inch Operator has far superior sights with fully adjustable three-dot tritium. 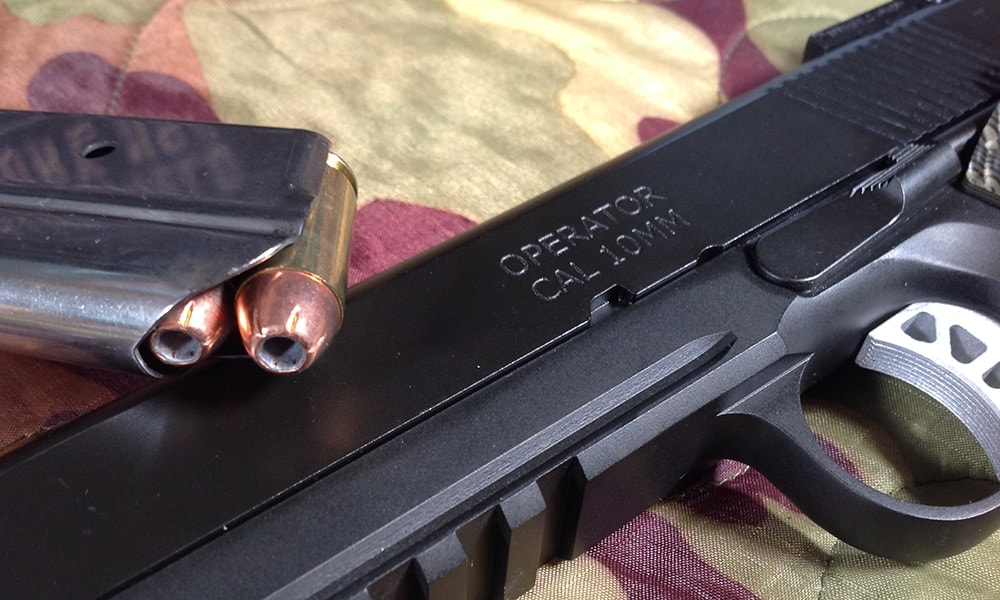 A GI-style, 16-pound recoil spring drives the action while balancing the 10mm’s stout recoil.  Accuracy is greatly aided by the SA Gen 2 Speed trigger with an advertised 4.5-5 pound trigger pull.  The integral accessory rail is a welcome addition, as is the ambidextrous thumb safety. What the company calls an “Octo-Grip” front strap is actually front and mainspring housing external texturing for added purchase in inclement conditions.  The outfit is dressed in quite a mouthful– VZ Alien Dirty Olive G10 grips with metalwork finished in corrosion-resistant Black-T.  The whole thing ships in a large SA cardboard box with two eight-round stainless magazines and a roomy embroidered zippered case with ideal for hauling the pistol, multiple mags, and range extras.  The kicker to this almost too-good-to-be-true sounding setup?  The price is mountain-high, with an MSRP of $1,842. 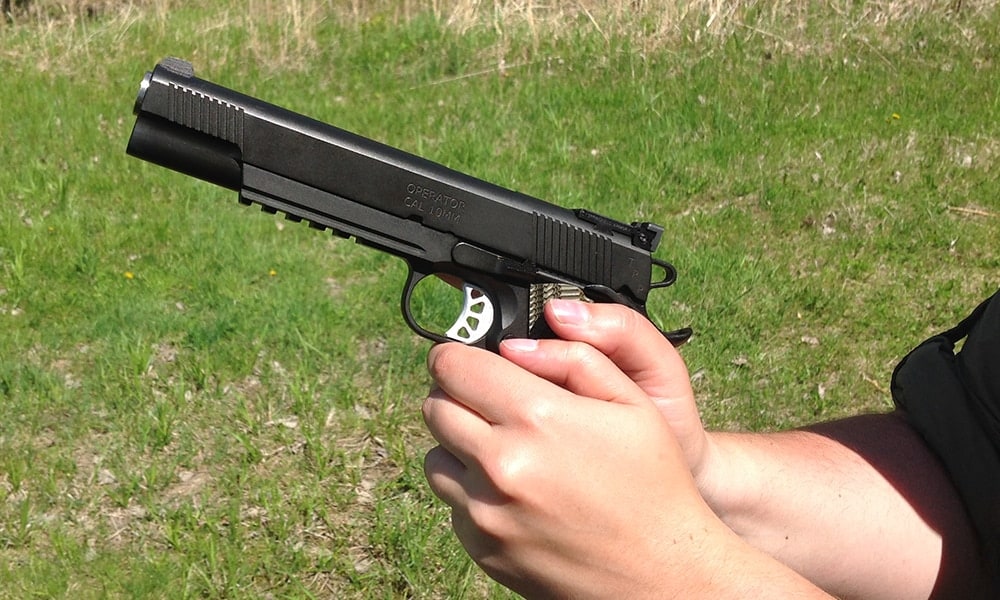 After over 100 rounds down range, the Springfield TRP Operator ran flawlessly through a variety of ammunition and distanced itself from the similarly-built Remington R1 Hunter. (Photo: Kristin Alberts/Guns.com)

The TRP, Tactical Response Pistol, we have here in our hands today is based on the custom professional model that won the FBI’s Hostage Rescue Team (HRT) 1911 pistol contract. Until the 10mm was introduced at SHOT Show 2018, Springfield’s TRP Operator line was only available in .45 ACP, and solely considered a defensive protectorate.  Not so any longer.

Right out of the box, the TRP balances well and feels over-built to pack the wallop of the potent 10mm round.  The TRP shares much in common with Remington’s R1911 10mm introduced last year, but ups the ante with superior features.

For our purposes, we’re looking at the TRP 6-inch longslide as a hunting pistol.  As such, the factory fully adjustable sights are on point, though an optics-ready top mount would be a big plus, sans gunsmithing.  The forged steel integral lower rail with five full slots offers plenty of room for lower light or laser mounting. Between the texturing and aggressive VZ grips, there’s plenty of purchase for shooting in the adverse conditions often put forth in hunting environments.  The Black-T matte finish is dull and durable enough to excel in the field. 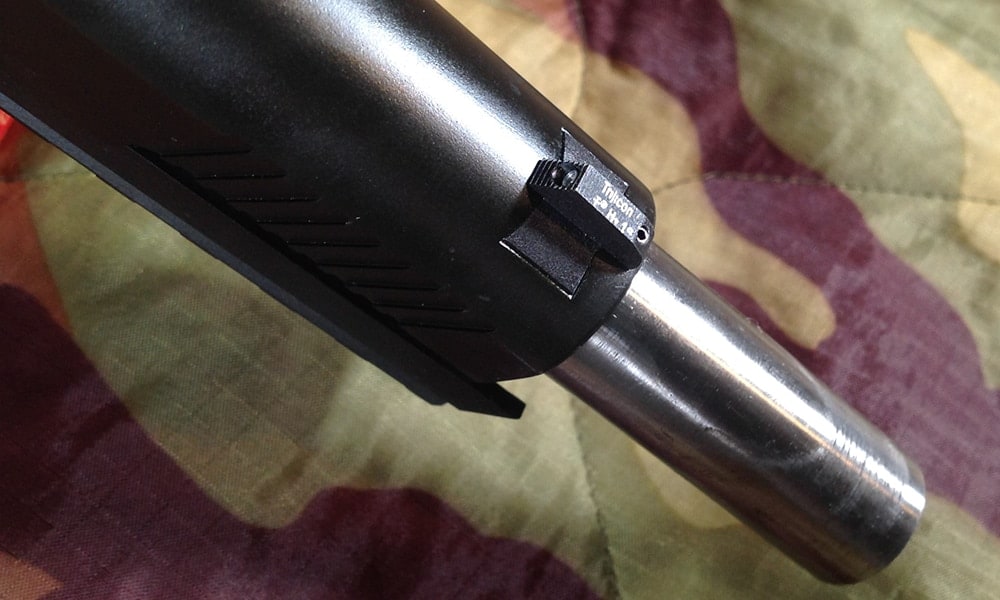 The sights really set the longslide version of TRP Operator apart not only from the shorter version, but from its competition as well. The Trijicon front shown here is a great aid to accuracy in less than ideal conditions. (Photo: Kristin Alberts/Guns.com) 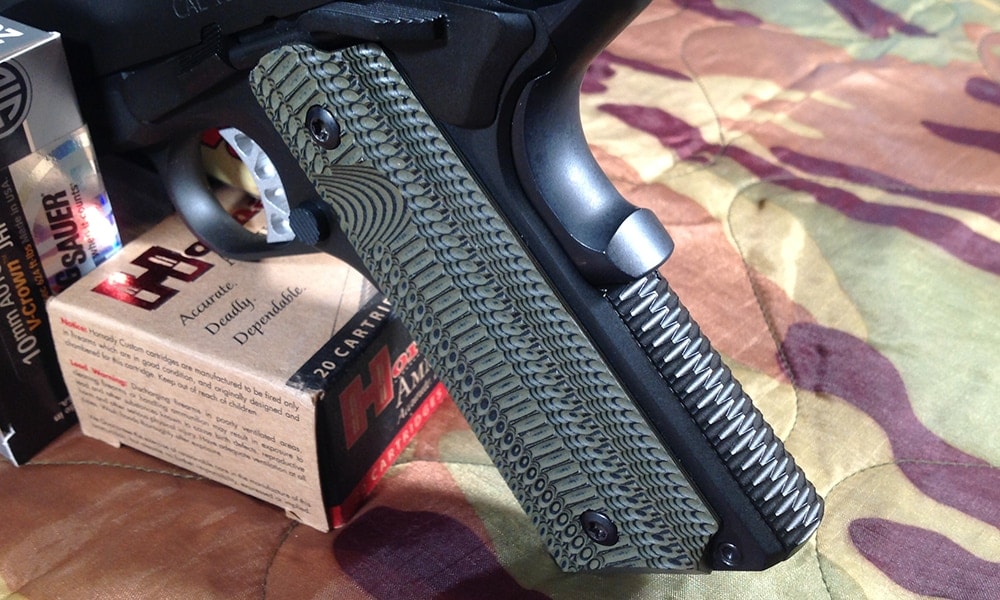 Down to the nitty-gritty, we hit the range with a nice array of ammunition.  Sig Sauer Elite Performance, Barnes VorTx, Hornady Custom, Speer Gold Dot, and Remington UMC.   Unlike an unfortunate experience with the similar R1 Hunter struggling with reliability, the TRP Operator ran through over a hundred rounds without a hiccup.  The slide is smooth and ergonomics on both grips and controls are on point. Our test model’s trigger broke repeatedly around four-and-a-half pounds, much better than we’ve come to expect from a 1911-style sidearm, also a great aid to accuracy.  The long sight radius aids in overall accuracy. From a rest, I feel confident putting shot after shot in the key vitals of big game. At 25 yards, three shot groups were repeatedly under 2 inches, with more seasoned handgunners sure to do even better.  The TRP is the most controllable, softest shooting 10mm I have had the pleasure to plink with, and certainly one of the finest non-custom production models.  This is one pistol that’s as much fun to shoot from the bench as it is to shoot off hand.

It’s no secret that the 10mm comes not only with more potent power than its counterparts, but also increased recoil. Some designs manage that better than others, and the TRP is one of the best.  By incorporating a heavier-built slide and bull barrel combination with an optimized recoil spring, the Springfield is ultimately as soft-shooting a pistol in a 10mm as you’ll find anywhere.  That all keeps you back on target quickly, and for hunters, ready for a quick follow up shot as needed.  Price is all that will hold the Springfield back, as its retailed out at the top of its factory class.  When compared with true custom options like the Nighthawk or STI with prices upward of three-grand, Springfield’s TRP Operator suddenly sounds like a bargain.  Just as beauty is in the eye of the beholder, so is the price-feature-desire balance. 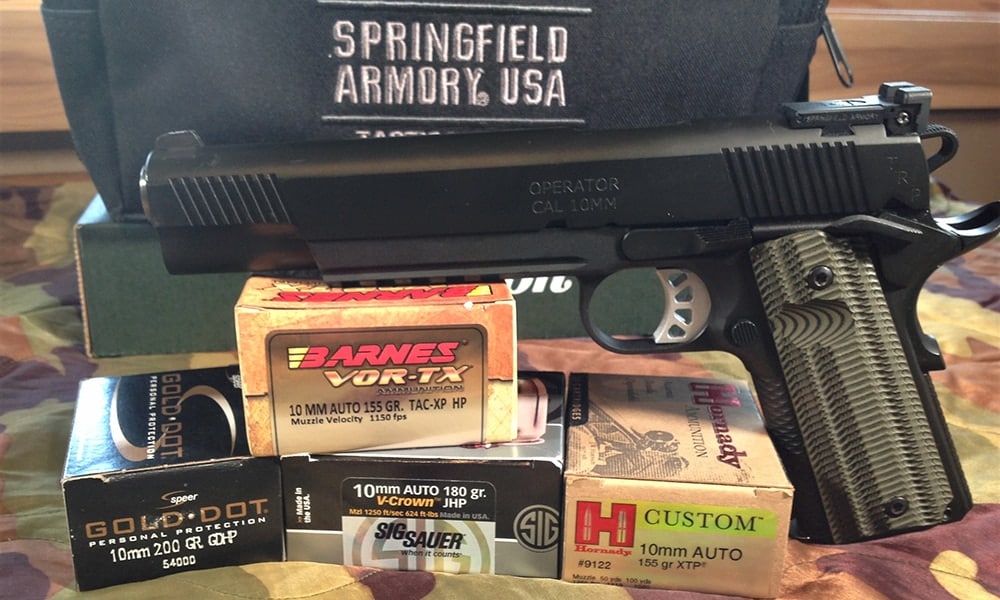 The Springfield TRP Operator has been more than worth the wait.  Though marketed as a tacticians pistol, the longslide version has legitimate use as a hunting pistol for those so inclined–hogs, deer, and other game.  The price is steep, but if you’re in the market for a 10mm, you’d be remiss to dismiss the new Springfield TRP Operator based solely on MSRP, as this comes as close to custom in a production gun as you’ll ever find.  For a gun never truly intended to be a hunter, the company has knocked out of the park what it never set out to achieve.