This long-range specialist is an update to the  original 10 BA Stealth, released in 2017.  Savage installed a slew of upgrades and changes to make this model stand on its own merits in the product line.  In this test, we put the 6.5 Creedmoor model through its paces.

Leading the way is a three-slot compensator that substantially dampens recoil without adding to ambient noise. It’s visually striking and acts as an endcap to the tactical look of the rifle.

A fluted but heavy, 24-inch carbon steel barrel with 8 5R twist, helps to insure accuracy. Encasing the lower half of the barrel is a bronze-cerakoted aluminum handguard with M-Lok and a five-inch strip of Picatinny rail insert on each side. Pic rail makes another appearance on the top rail, a whopping 18 inches of space to attach optical gear. A sling swivel mount under the handguard makes a perfect sling or bipod attachment point. 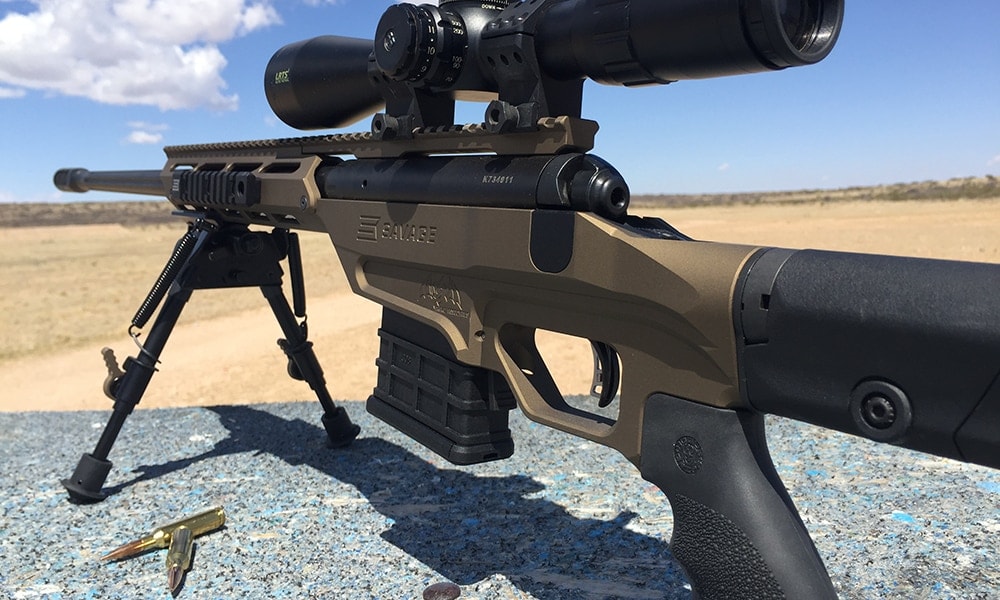 A veritable mile of rail gives the operator lots of choices for mounting optics and accessories. (Photo: Eve Flanigan/Guns.com)

The bronzed aluminum receiver is a real eye-catcher, with bold, modern lines and an industrial-size trigger guard. The bolt is a standard Savage centerfire model with adjustable baffle. A polymer 10-round box magazine, in black, is included. Savage’s AccuTrigger offers a clean and adjustable break. Our test model’s trigger was set, out of the box, at just over 2.0 pounds—appropriate for a match rifle, but light enough to make a body thankful for the AccuTrigger’s disengagement lever and the large trigger guard.

Magpul was Savage Arms’ pick for the stock. Close as I can tell, it’s that brand’s PRS Gen 3 Precision-Adjustable model, which retails for $254.95. It has an adjustable length of pull/eye relief, and adjustable cheek riser. Both adjustments on this well-padded polymer stock are made by roller dials that make an audible click-click-click as they turn.

With the shoulder pad set at maximum distance, the overall length of this rifle is 48.25 inches…no small package!

Testing was done with a Bushnell Elite Tactical LRTSi 3-12x 44mm scope, which has already earned this writer’s respect for its role in making my AR15 into a 1,000 yard shooter. Now, on the Stealth Evolution, the scope makes the 575-yard gong at the local range look close.

Zeroing at 100 yards showed the Evolution to be a sub-MOA rifle—and not just a little “sub,” but half an inch. Groups were tightest and most consistent with Federal’s Gold Medal Match ammunition, though other Federal loads were tested. Federal’s online ballistics calculator made on-range calculations easy, though the wind often wreaked havoc on windage holds. Unlike many ballistic apps, the Federal Premium Ammunition calculator “knows” ballistic coefficients of in-brand products, making initial calculations as true as possible. 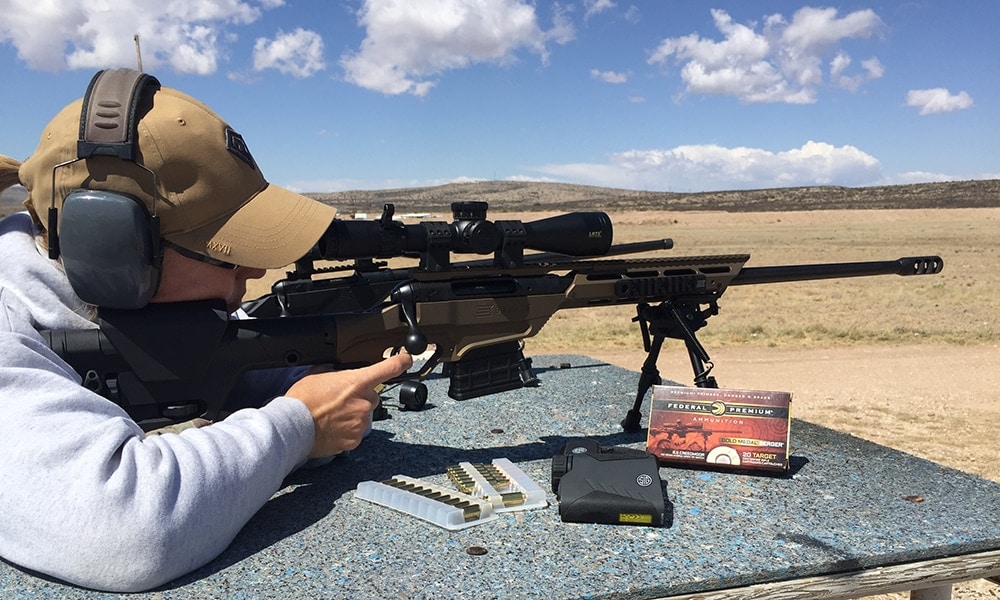 This rifle-with help from a great optic and online app–gave me a memorable range day when it easily whacked a gong at 575 yards on the first try. (Photo: Eve Flanigan/Guns.com)

It was a deeply rewarding, even moving, experience to pull this rifle out of six-week storage, dial the ballistic calculator’s recommended elevation into the scope, and watch the 10-inch gong swing on my first 575-yard attempt. The Evolution may not cost as much as some premium target rifles, but its capabilities are premium quality. It gave me a range day I’ll not forget.

There has been only one bauble in the test experience with this rifle. When it was brand new, for the first 30-40 rounds, closing the bolt required an assertive bump to dislodge the new round from the magazine. This was apparently a break-in issue, as it’s not continued to display this annoyance since it was new.

This is a heavy rifle at 11.0 pounds, sans ammo, and it’s easy to see how the platform will easily accommodate calibers larger than 6.5 Creedmoor. Its bulk delivers recoil-taming effects; so much that there’s nearly nothing to feel with this caliber.

The Evolution can easily run with the big boys on the match front. While the standard Savage Arms bolt may not be as buttery-smooth as the one on a rifle costing three or more times as much, smooth bolts don’t have any real bearing on downrange results. 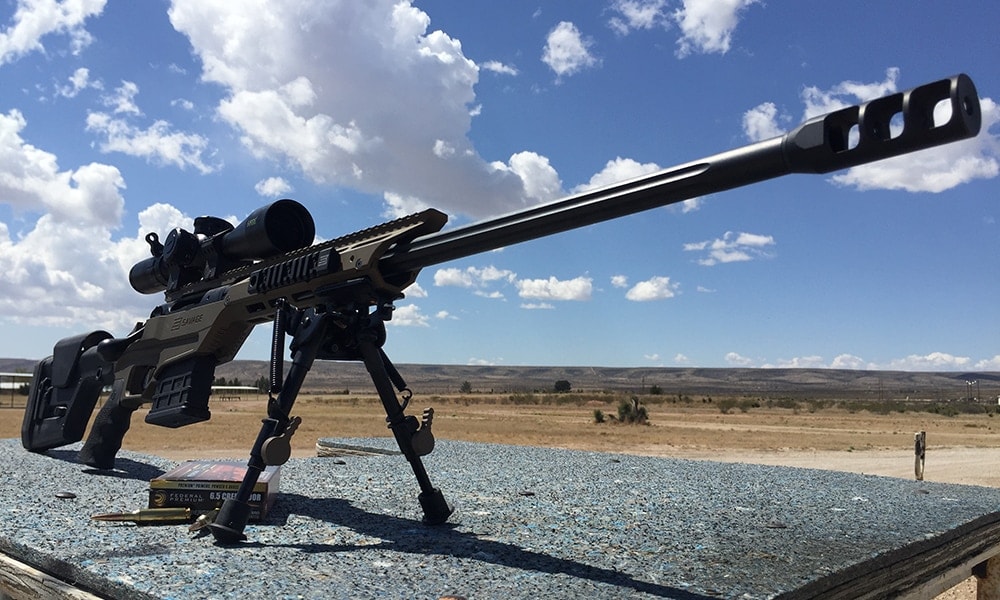 Handsome devil, isn’t it? The Evolution backs up its good looks with even better performance. (Photo: Eve Flanigan/Guns.com)

Its bulk and the audible stock adjustments make the Stealth Evolution a better choice for target practice or competition than for most hunting situations or sniper hides. What it’s made to do, though, it does well, and at a working person’s price. With the superb performance and relatively low cost of 6.5 Creedmoor ammunition, this chambering is, I feel, an excellent choice for those wanting to regularly engage targets at 500 to 1,400 yards. Beyond that, one of the larger cartridge choices in the Evolution might be an easier choice.

Having said that, the combination of an 8 5R twist and a well-tested match bullet might put this model/caliber combination right up in the rankings for longer ranges. This writer didn’t get the chance to pit the Evolution against bigger kin.

There’s no satisfaction quite like that of a well-planned, well-executed shot. The 10 BA Stealth Evolution can help you get that feeling nearly right out of the box, when equipped with a good optic. With an MSRP of $1,799, it’s hard to go wrong with this one.