A sassier twist on the classic derringer, the Mama Bear by Bond Arms, is a California approved pistol with attitude. This pink mistress won me over with her sexy style and simple nature. 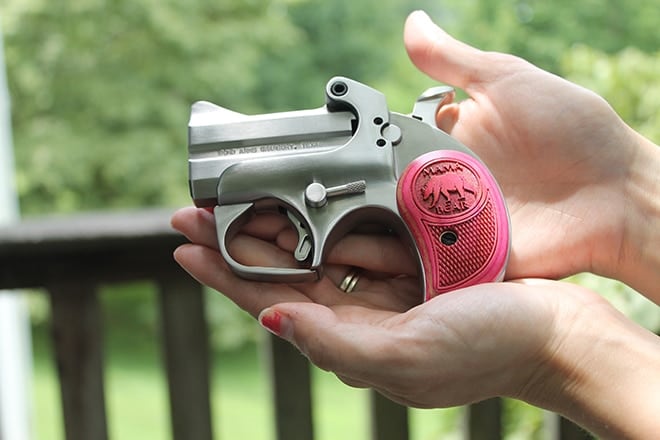 Bond does not skimp on quality. The Mama Bear barrel is constructed of sturdy stainless steel. Not only does this give the pistol a sleeker look but it also makes it incredibly sturdy. I feel certain this pistol could take some hits and keep on shooting. The stainless steel also adds some weight to the pistol, but the good kind. Still quite concealable, the Mama Bear is just heavy enough to ward off any uncomfortable recoil.

Resting on top of the pistol is a front blade sight fixed between notched rear sights. The large blade design on the front sight keeps that sight readily in focus while shooting. I found it incredibly easy to focus while shooting and my groupings reflected as much. 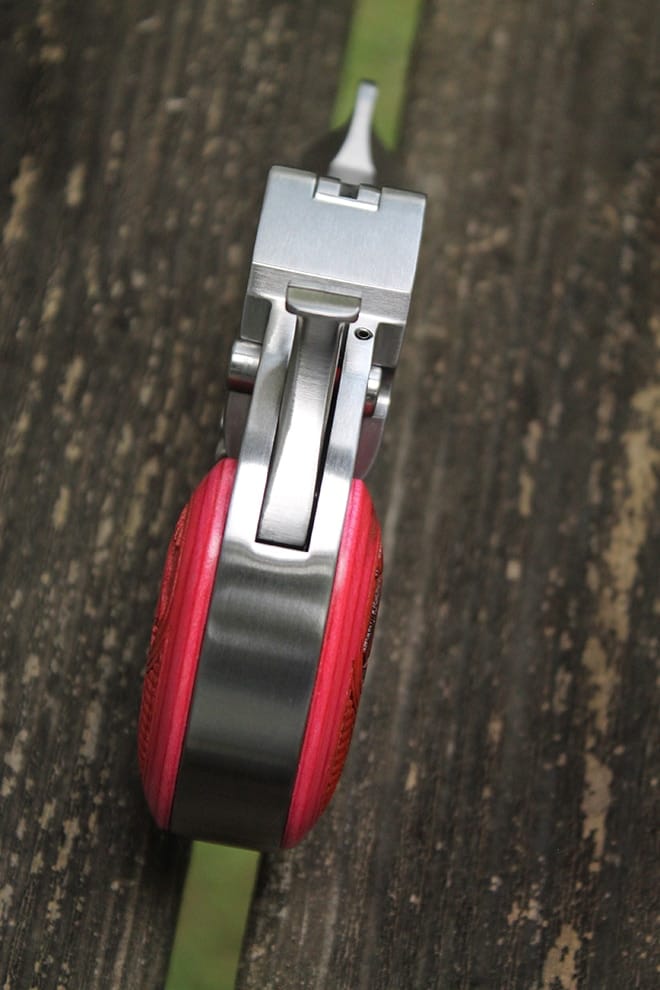 I found the bladed sights on the Mama Bear to be intuitive. (Photo: Jacki Billings)

Though I’d like to say that every aspect of the Mama Bear was as intuitive as the sights, I have to admit that loading took some practice. The hinged design on the barrel means that it flips backwards on itself. This does not prove problematic until rounds are inserted and the shooter must then close the action; if not done properly, you will be pointing a loaded gun at the person beside you.

As I stared down at the Mama Bear on my bench, I had to quickly decide how I was going to load and ready the firearm safely. I came to the conclusion that rotating the frame as I closed the action would keep the barrel pointed downrange at all times. My system worked and at no point did I upset any other shooters or range masters.

This particular model is not only California compliant and approved, but comes standard as a 9mm handgun. If 9mm isn’t your style, the barrel is interchangeable. A simple twist of an Allen wrench and you can trade out for just about any popular cartridge size. Especially useful if you want to use cheaper ammo at the range but carry a different caliber, the interchangeable barrels offer flexibility that I like in this firearm. 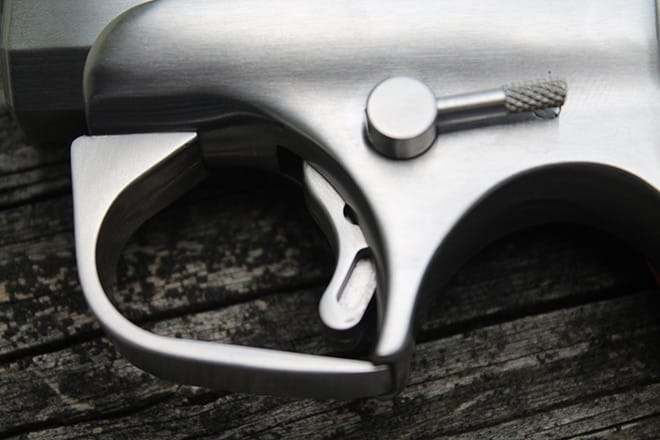 With safety in mind, the Mama Bear comes equipped with a few handy mechanisms designed to ease any fears while carrying. The first is the rebounding hammer. Simply put, when the gun is fired the hammer automatically bounces back into the half-cock position. This rebound keeps the hammer off the firing pin therefore preventing any unwanted discharges of the second round.

A crossbolt safety is also installed on the Mama Bear as an added means of security. This mechanism prevents the hammer from striking the firing pin should the hammer be released accidentally. To engage the crossbolt, push the pin on the side of the frame. When disengaged, the pin will show red alerting the shooter that the firing pin is ready for striking. 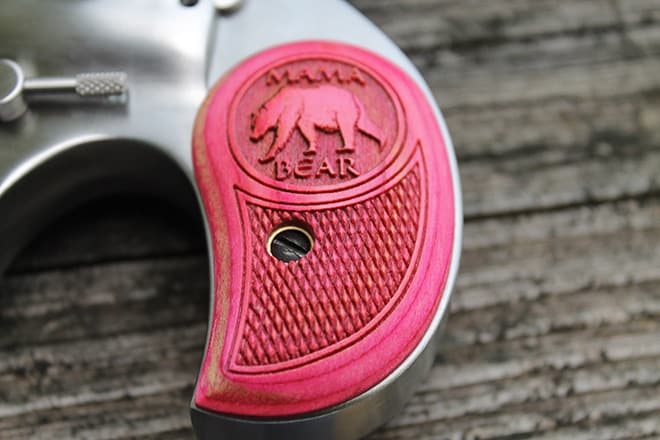 I’m usually not a fan of pink guns, though I must confess, this one wears it well. (Photo: Jacki Billings)

I’m not a pink girl by any means. In fact, it’s one of my biggest pet peeves in the gun world. On most firearms I find that particular color comes off as a desperate ploy to appeal cute. In most cases it doesn’t work and instead looks cheap. The Mama Bear somehow makes pink work.

For once, I wasn’t embarrassed taking a pink gun to the range. The marriage of the stainless steel frame with the rosewood tinted grip make this little gun pop. I dare say, the pink actually improves the overall appearance. 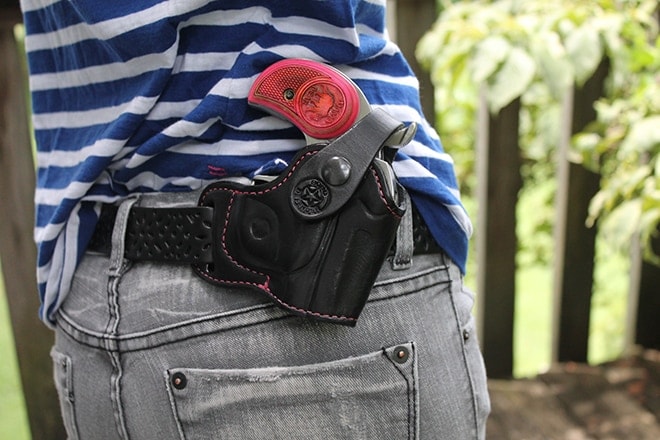 Though the Mama Bear is a head turner, certainly standing out amongst the usual trove of handguns, the big question came down to how she’d fare on the range. Fresh off my not so pleasant range experience with the Heizers, I wondered if this derringer would leave me hurting like my last experience. It was with great trepidation that I loaded two 9mm rounds into the Mama Bear. 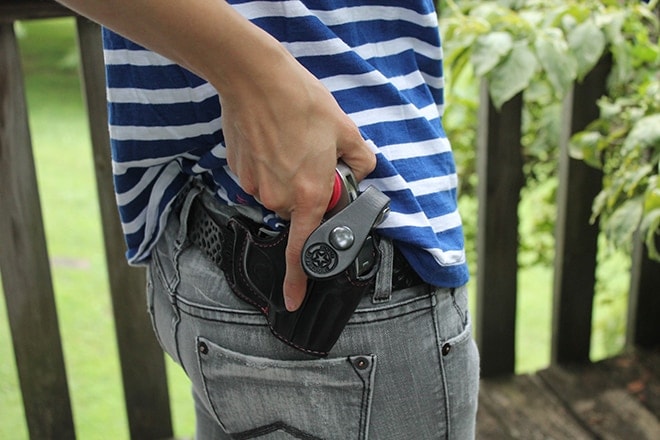 Any decent sized round in a handgun this compact is going to be felt; however, the Mama Bear didn’t leave me any worse for wear. The first few shots were spent with me working on grip. At no point did the gun leap out of my hands, but at first I was finding it jumped more than I wanted. After some quick alterations, I got into a good groove and didn’t face leaping issues again. 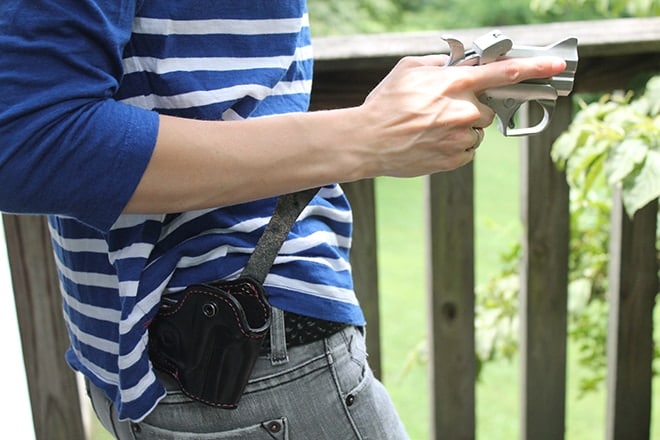 Presenting Mama Bear. Getting a proper grip and mastering the back and down trigger pull took some practice as well. (Photo: Jacki Billings)

My next set of adjustments came down to the trigger. Familiar with the “straight back” pull technique of most modern semi-auto triggers, the “back and down” pull procedure with this derringer threw me for a loop. I couldn’t figure out why the Mama Bear’s trigger was just so hard to manipulate. It wasn’t until the range master, a shooting buddy of mine, reminded me of the proper pull technique did everything click. Suddenly shooting the Mama Bear became less frustrating and more fun. 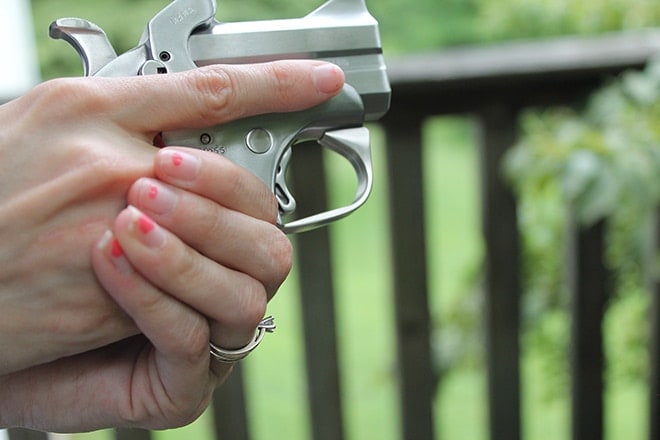 Close up of grip for Mama Bear. (Photo: Jacki Billings)

After some plinking with the 9mm barrel, I switched over to a different barrel and quickly found my favorite combo lie with another size: .38/.357. The perfect balance of power and recoil, this barrel had the cleanest shots. I ended up putting more rounds of .38 and .357 down range than I did of 9mm simply because that barrel was more fun to shoot.

I appreciate the simplicity of a well-made derringer. While you won’t see me sporting one solo, I find they make excellent back-ups. The Mama Bear is one such derringer. The craftsmanship and performance mesh to produce a top-notch, two shot pistol. The Mama Bear retails for $445.