Gun Review: Bringing back the classics with the Zenith Z-5P (VIDEO)

If you were like me as a kid then you grew up watching action movies where black clad commandos rappelled in through the roof with MP5’s blazing, or you cut your teeth on games like Tom Clancy’s Rainbow 6 where the MP5SD was a silent death dealer. It’s perhaps the most ubiquitous pistol caliber carbine on the planet. With around 100 variants and over 40 nations having adopted it for their police and military, it may just be one of the most recognizable firearms in modern history. So to say that this has been a bucket list gun for me is not an exaggeration!

The History Behind the Gun

Enter Zenith Firearms in Afton,Virginia. A bit of backstory here; about 40 years ago, the Turkish arsenal MKE (the oldest continually operating armory in the world) purchased original tooling, dies, machinery and schematics from H&K in Oberndorf, Germany and began producing true to spec roller locked/delayed MP5s as well as other variants. In 2014, Zenith Firearms partnered with MKE to bring these firearms to the American public, for about $1,000 less than then you’ll ever find an H&K MP5, or other clones for. So needless to say, for most of us, it’s a superb deal.

Some quick details and specs for the Zenith Z-5P. Zenith offers around 12 variations of their “Z” series of firearms. The model I tested was the “Z5P SB Rail,” which comes with a Midwest Industries M-Lok handguard and SB Tactical folding arm brace. Included in the rugged plastic case with the pistol is a cleaning kit complete with bore snake, a sling, an owner’s manual and three 30 round steel magazines. The fit and finish was good, some of the welds on the upper receiver were a bit clunky looking, but the gray Cerakote was well done and even. Overall, it’s a great looking gun. 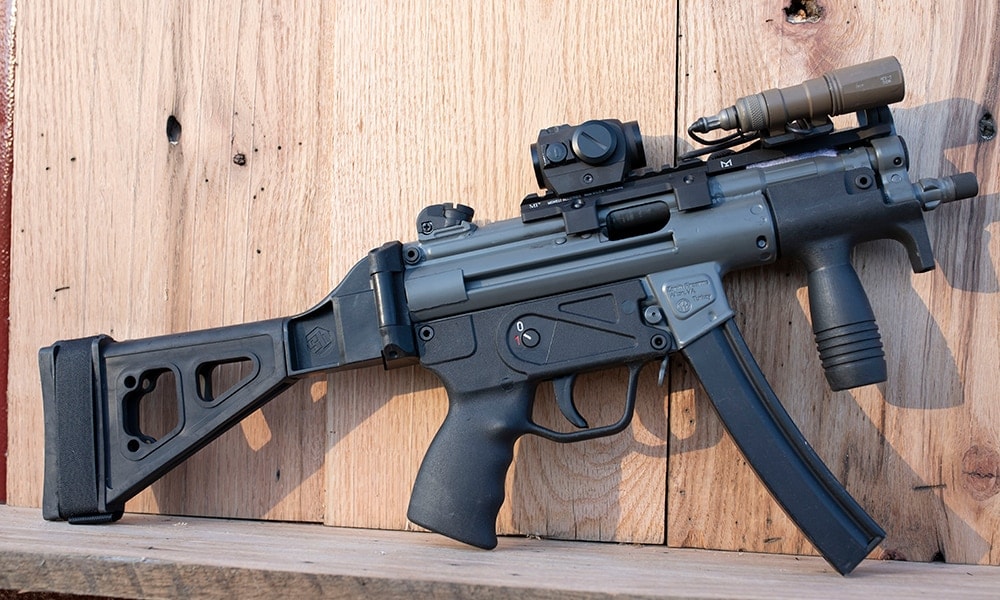 The Z-5P maintains the classic ascetics of the original HK design while being affordable enough to allow a new generation of shooters to enjoy the design while still having enough money to make the gun their own. (Photo: Chase Welch/Guns.com) 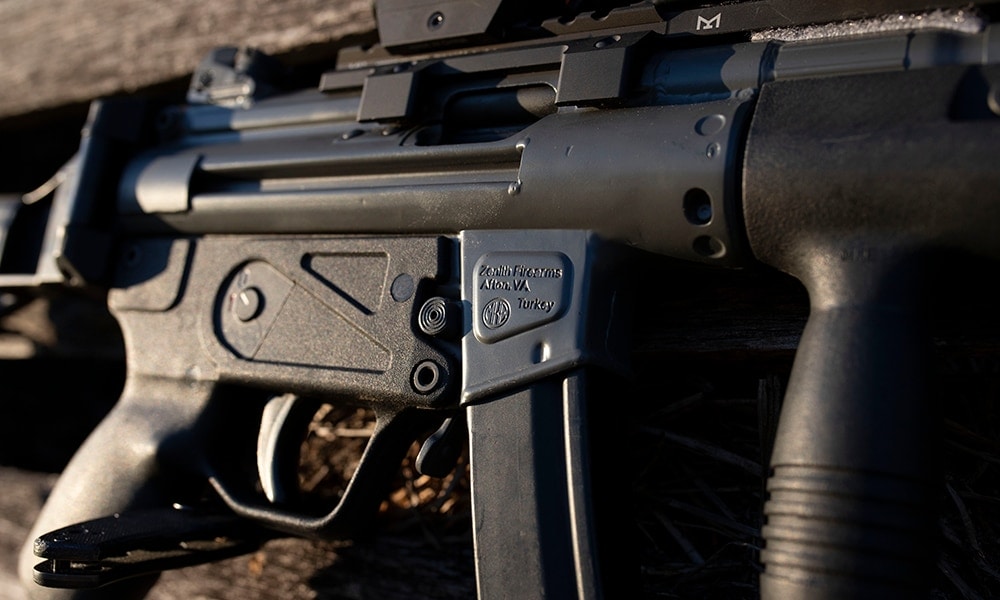 There are a huge number of accessories for the MP5 pattern of firearms, with a number of ways to configure the same firearm to make it serve the exact purpose needed by the end user. (Photo: Chase Welch/Guns.com)

The “P” model sports a cold hammer forged 5.8 inch barrel, the rear sight drum is adjustable for elevation and windage. It has an overall length of 23 inches with the brace extended, 14.4 inches with it folded, and weighs in at just over 5 pounds unloaded. It also comes with the addition of a Picatinny optics rail mounted over the ejection port on the upper receiver. The controls are the classic H&K design and unlike some of its MP5 clone counterparts the Zenith Z-5P features the original paddle magazine release as well as a push button release. It features the classic three lug mounting system for a suppressor as well as a threaded (1/2×28 RH) barrel and end cap. For those of you wishing for a bit more of an in-depth description, more information can be found here.

Being primarily an AR guy, it took an hour or so to adjust to the controls and manual of arms. There are a few primary differences to get used to. The first is that the bolt doesn’t lock back on an empty magazine, much like an AR, and these guns really don’t like to seat a full 30 round magazine with the bolt forward, though your mileage may vary as some guns do so without issue. You have to strip the magazine, they aren’t drop free, lock the bolt, feed in a new magazine and then perform the venerable H&K Slap to send the bolt home. No big deal, just a training issue. Another difference is the placement of the selector switch. Maybe it’s just my dainty little hands, but it seems H&K designed this gun with a much larger person in mind. Again, just a training issue. I found that by breaking my grip towards the selector just a bit it was easy to manipulate despite a somewhat heavy detent. The last issue that some AR guys have to overcome is the paddle magazine release, but fortunately having run AKs as well for a while this didn’t trip me up at all.

Taking it to the Range

Maybe it’s the MP5 fanboy in me but this pistol was really fun to shoot. I had the good luck to get to spend four days in Arizona running the Z-5P, I don’t think I stopped smiling the entire time. Over the course of the four days I didn’t experience a single weapon related malfunction. The Z-5P also way out performed the H&K advertised 3 inches at 25 yard accuracy standard. It was no problem to get a good group at twice that distance with the iron sights, and once we added a Holosun red dot we were getting good “combat effective” groups out to 100 yards easy as you please. 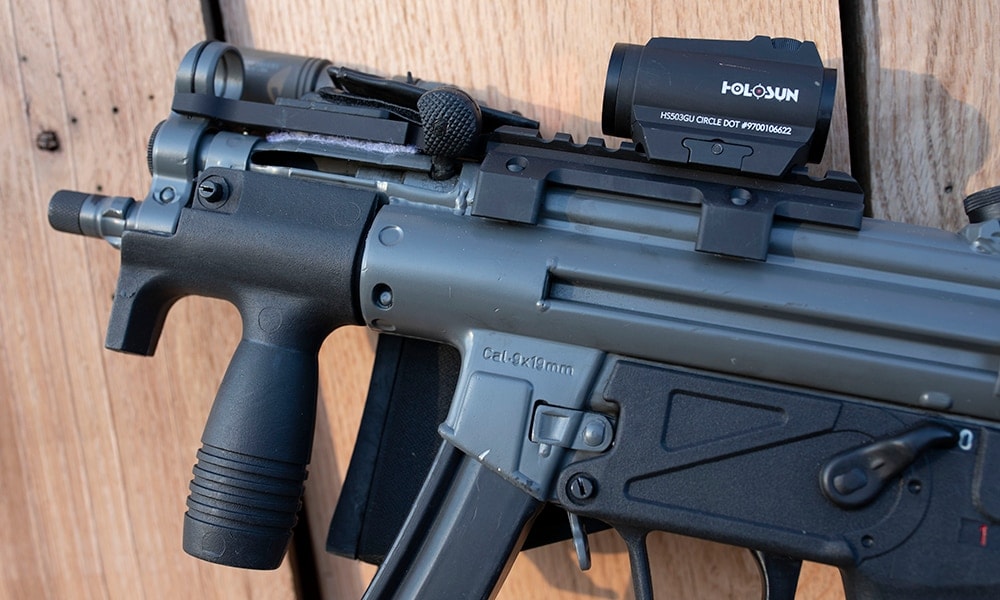 The Midwest Industries MI-MP5KTR top rail allows the mounting of not just optics but of light/laser accessories as well, and is a first for the HK MP5 pattern of firearms. (Photo: Chase Welch/Guns.com) 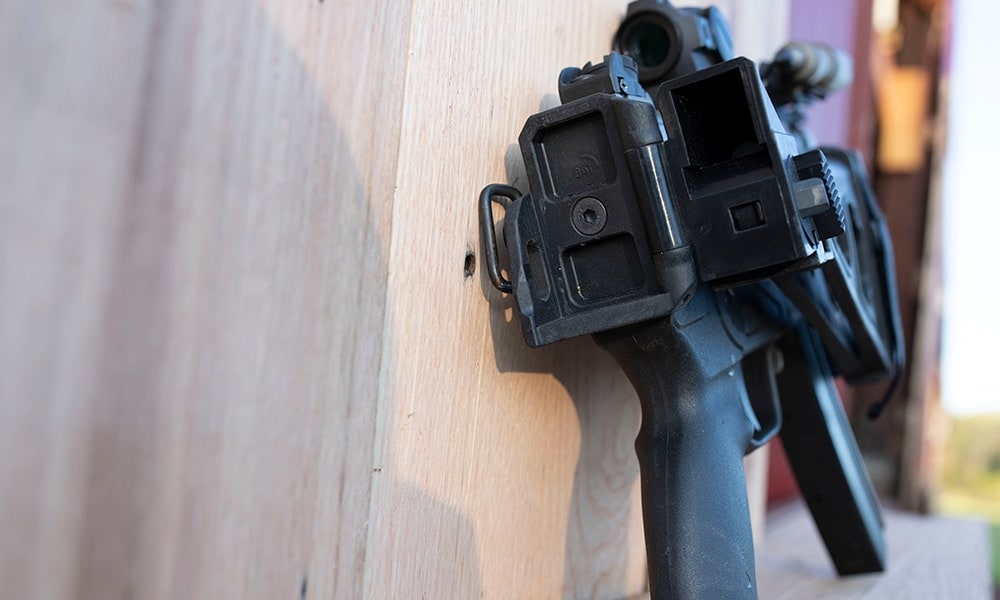 This Z-5P is shown here with the SB Tactical SBT5KA folding brace, but will accept a large number of MP5K stocks or braces. (Photo: Chase Welch/Guns.com)

In its natural habitat as a CQB weapon this gun performed as expected. Compact, light, with no appreciable recoil it tore paper and rung steel with ease and definitely had no problem keeping up with the AR’s in the class despite my inexperience with the platform. It was easy to see why this platform has been the pistol caliber carbine standard for so long. What I wasn’t expecting was how well the Z-5P would do when we got out and started doing some long range shooting.

While not my first choice for long range work out in the world it was still pretty impressive. We were able to really stretch the 9mm round out and I have to admit it was a great learning experience. With a 25 yard zero and no hold over, it was easy to get hits in a 10-11 inch area out to 100 yards and inside of a 24 inch area out to 200 yards. After that accuracy started to drop off sharply but that may be due to the ballistic limitations of 9mm at that distance. While it’s true that the 9mm round would have little in the way of desirable terminal ballistics at that range, it was really an eye-opening experience about what you can do if you should have to press the Z-5P into service roles it was not designed for.

I really enjoyed my time with the Z-5P. Initially it was a novelty gun on my bucket list, but as I spent more time with it the novelty wore off to be replaced with a serious respect for the capabilities of this gun. The roller delayed system is probably the most robust and reliable operating system ever built (apologies to Mikhail Kalashnikov) and the huge, if not well advertised, amount of aftermarket parts available helps to bring this venerable weapon into the modern world. At around $2000 it might not be for everyone, but it does fill a certain niche quite well. For the collector or serious enthusiast it would be well worth the cost. In the hands of a seasoned MP5 shooter I’d have to say that this little pistol would be pretty formidable.