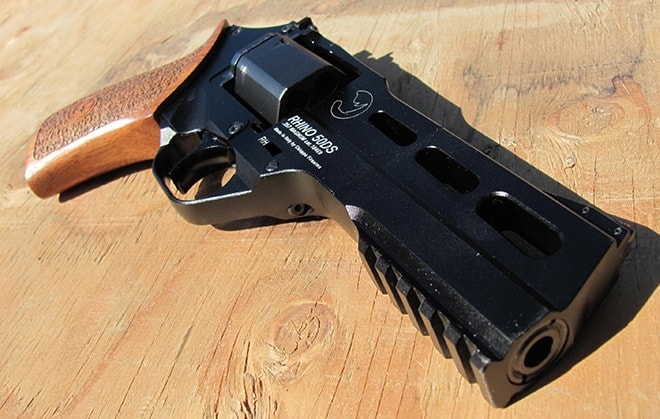 We all love the idea of innovation, but there’s often a rough patch between an idea’s initial implementation and a market-ready version of the exciting idea. Doing something different from your peers sometimes leads to spectacular advances in a field, and other times it makes you look like an eccentric dork. The Chiappa Rhino sort of does both. There’s lots of good (albeit not original) ideas with the gun, but it’s far from perfectly executed. Combine that with the fact that it’s competing in a sphere of guns that’s tradition-oriented, and the Rhino is a tough sell.

Designed by Emilio Ghisoni, Chiappa began producing the Rhino in 2010. Ghisoni has a long history of oddball revolvers, and the Rhino is comparatively tame. But it takes many of the key design cues from his previous guns. 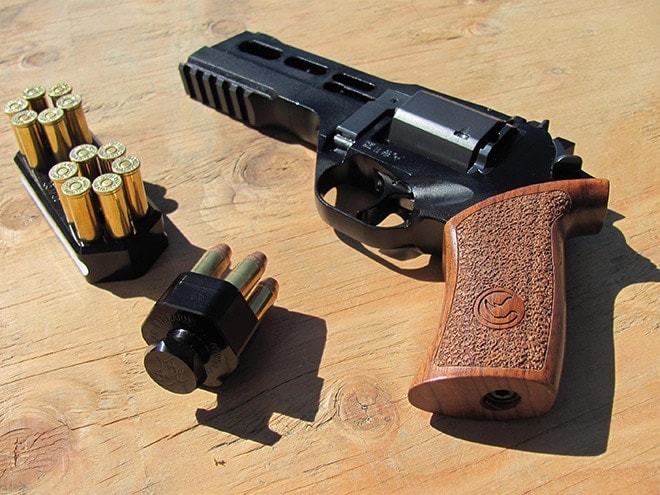 The Rhino pictured with some Five Star Speedloaders. It also works with most speedloaders designed for L-frame S&W revolvers. (Photo: Andy C)

The Rhino isn’t cheap, retailing for an MSRP between $1500 and $1100 depending on the model. Sold in a variety of barrel lengths, finishes, and calibers (including rimless cartridges like 9mm), the Rhino is a double-action revolver that mounts it’s firing chamber at the six o’clock position in the cylinder, and places the barrel low on the gun. This, coupled with a futuristic styling, makes it stand out in aesthetic and function. We’ll review both here, using an older 50DS as a test sample.

My Rhino comes in at an overall length of 9.5 inches, and only weighs just under two pounds pounds—much lighter than any comparatively-sized revolvers on the market. This is because the majority of the Rhino is made of aluminum, with the barrel, cylinder, and part of the frame being steel. The weight is startling when you first pick the gun up. It has a wooden stock that slides into a small protrusion on the gun’s frame, removable using a hex wrench for cleaning or maintenance. 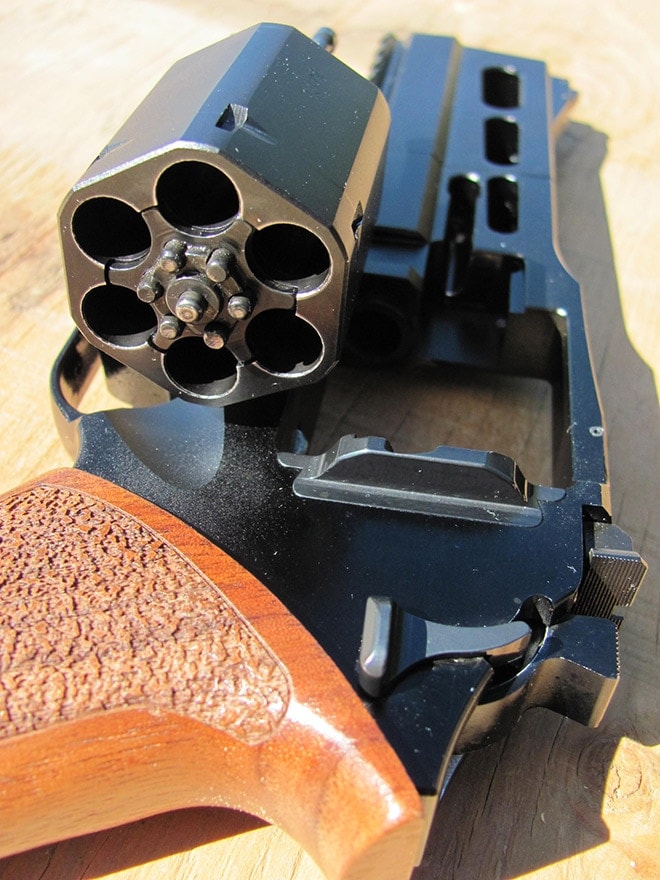 Speaking of maintenance, if you have to do any serious work on the interior of a Rhino, good luck. I have a lot of experience with double-action revolvers and I’m confident inside any Smith & Wesson. But the labyrinth of delicate, tiny, and mobile components that form the innards of the Rhino are daunting. I’ve taken it apart to deep clean it, and regretted it. While I don’t question the mechanism’s durability or cleverness, you definitely are paying a toll in complexity for innovation. 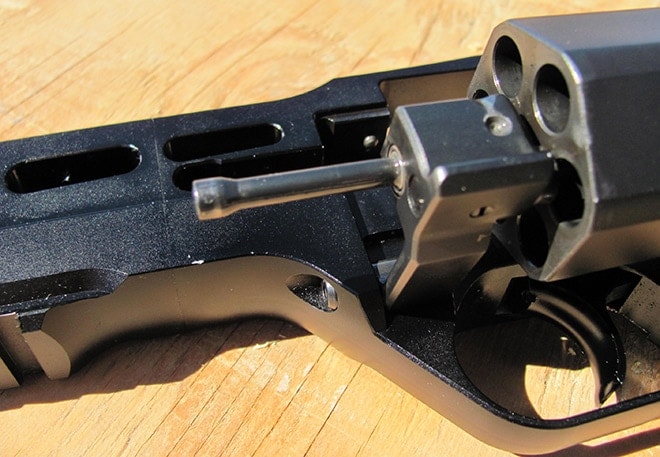 A bit of a spindly ejector rod. I don’t mash this one too hard. (Photo: Andy C)

Placing the Rhino’s side plate back on, there’s some oddities to it’s function on the exterior as well. The “hammer” on the rear of the gun is a cocking lever. Pulling the lever rotates the chamber and puts the trigger into single-action. It also raises a little red cocking indicator on the gun,. rear of the sights. The fantastic rear sights are adjustable for windage and elevation, providing an excellent sight picture and using nice broad screwheads you won’t have to worry about mangling much. My Rhino is an older model that had a basic black front ramp sight; new ones come with fiber optic sights.

The Rhino’s cylinder release is also different—a latch you push down with your thumb opens the hexagonal cylinder, and a small ejector rod works as you’d expect. It takes getting used to, but this mechanism works fine and I’ve never felt it impedes my ability to reload quickly. 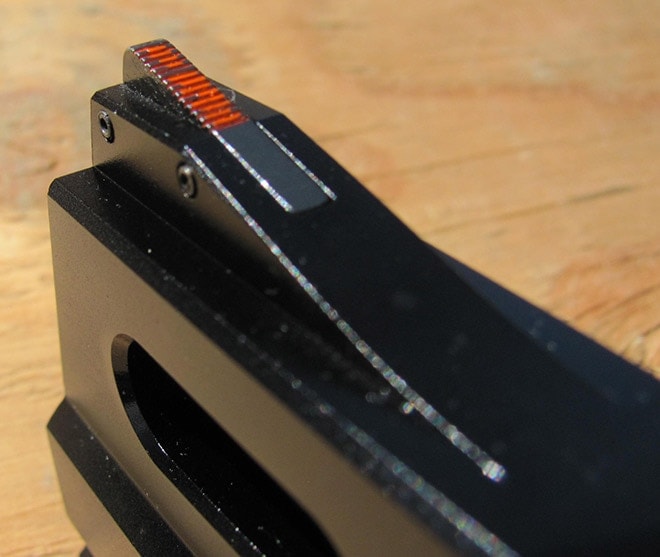 The Rhino also sports a broad, square target trigger — an interesting choice for a gun modeled for self-defense like the 200DS or all-around use.  I’ve not seen the Rhino marketed as a Bullseye gun, though I wouldn’t discount it in this realm. The trigger is unfortunately sharp on the edges and starts to take a toll on the finger when used for rapid firing in longer sessions.

All Rhino models share the same frame up to about the firing cone, at which point, the barrel shrouds are applied in what appear to be blocks. This means all guns feature seams. It doesn’t bother me—the gun is so unconventional looking that this is hardly an issue, I think. The four inch to six inch models offer a small underslung rail, while the 60DS also offers a top-mounted rail. 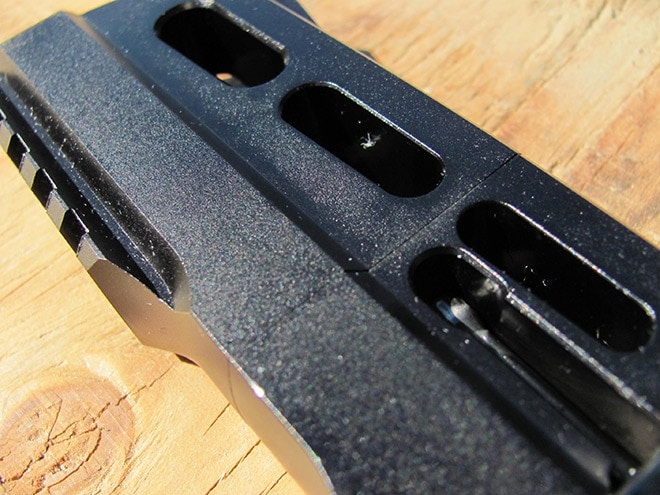 Seamlines! I don’t notice them much anymore but they seem to drive others crazy. (Photo: Andy C)

This is such a subjective topic. There’s no question the Rhino stands out in a crowd. Some people will love this gun, and others will hate it based on the looks alone, and this isn’t trivial — in the realm of revolvers, where form in some sense precedes function given the abundance of cheap and wildly reliable autoloaders, looks matter.

I think the Rhino looks awesome. I can’t really convince people one way or another. Let the pictures speak for the gun. 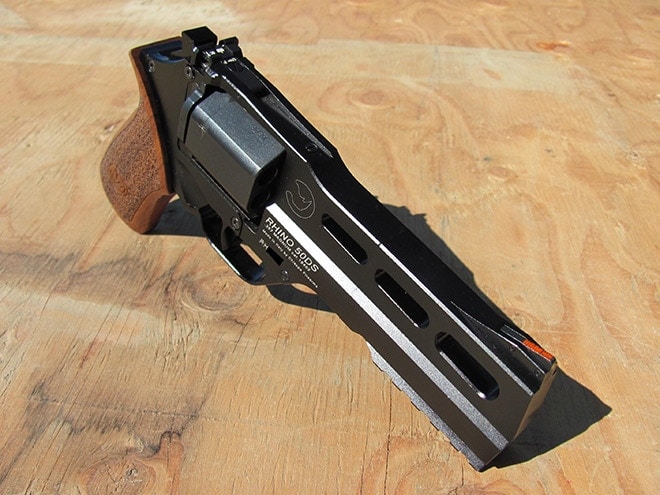 The profile of the Chiappa Rhino is unmistakable. Positioning the barrel at the six o’clock position lowers the barrel axis, though to little effect in my opinion. (Photo: Andy C)

No matter how cool (or ugly) the gun is, at the end of the day it has to shoot well. And I can say in some senses, the Rhino is a fantastic shooter, but has significant failings.

Obviously, the low-slung barrel makes a difference compared to most revolvers. The first time I fired my Rhino I started laughing because the recoil impulse is so strange I didn’t know what to think. Does it diminish recoil? No. The gun’s low barrel axis and very light frame mean you just feel it differently (it doesn’t make a .38 Special feel like a .22 LR). It pushes the gun back straight into your strong hand. 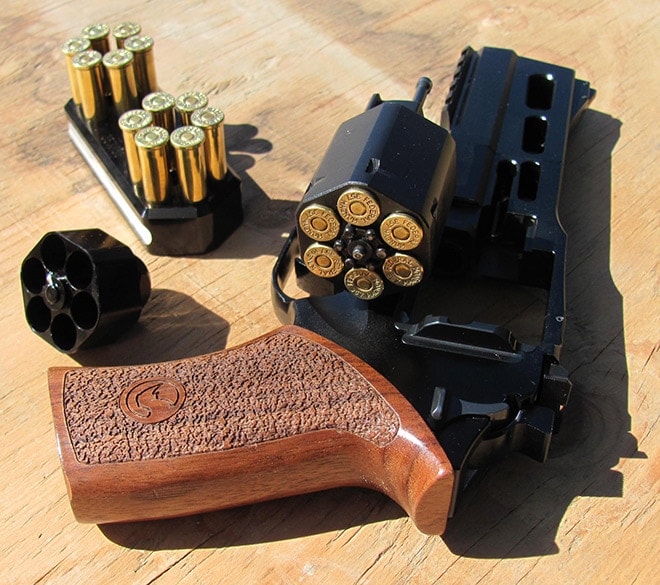 Chiappa Rhino, loaded. The spectacular single action trigger (in steep contract to the double action trigger) makes me wonder how this revolver would fair in competition. (Photo: Andy C)

Does it allow for some fast splits? Absolutely. Is hot .357 ammo punishing? Very much so, especially given the trigger and trigger guard’s shape, which are prone to biting your hand a bit. 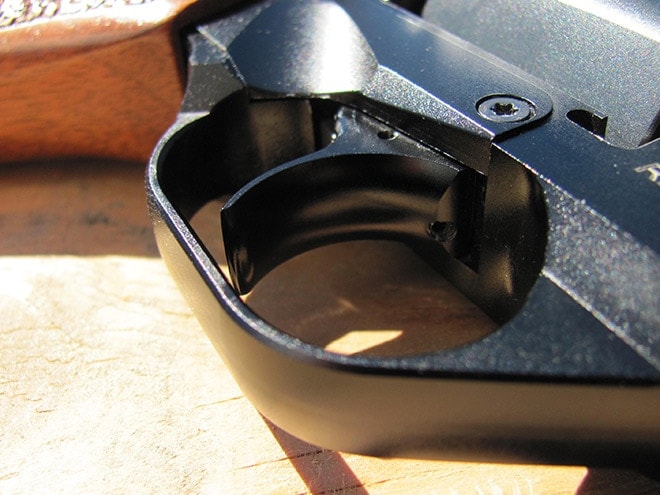 This trigger is a bit odd; great for bullseye shooting but starts to chew the hand with faster firing. (Photo: Andy C)

It also has a horrible tendency to short-stroke, so you can’t ride the trigger. It will rotate the barrel but not reset the firing pin and when you pull the trigger, you’re not shooting. If you’re trying to shoot as fast as possible this is an easy mistake to make and you have to consciously train to let the trigger reset all the way, with no pressure applied to it whatsoever.

The single action, on the other hand, is one of the best handgun triggers I own. Cocking it isn’t easy; no butter-smooth glide of a hammer down like my Model 27, but rather, hard push accompanied by some mechanical sounds and the cocking lever goes down, then springs back up. But once you get the hang of cocking it, the single-action trigger goes off with a feather touch. I think this may be a surprisingly viable gun for bullseye shooting. 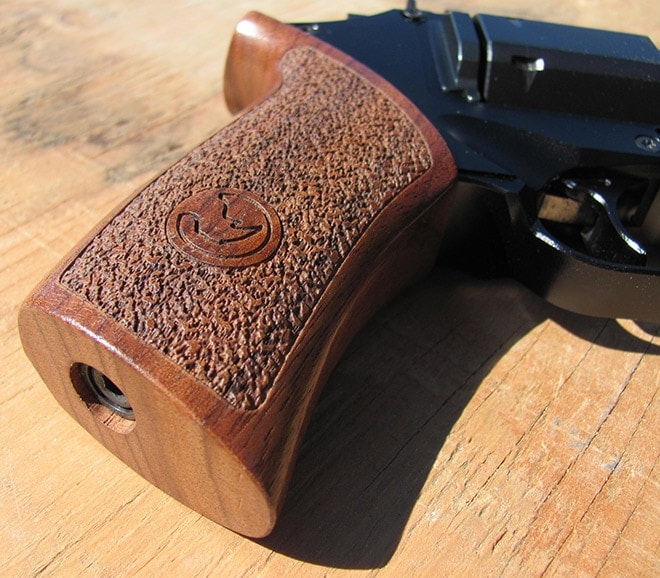 Related to the cocking lever, I removed the Rhino’s little red cocking indicator after a few trips to the range. It’s annoying to see a red stud peeking up every time you pull the trigger and doesn’t help me remember the condition of the gun, as this is purely a range toy. I didn’t need it so I took it out. The gun still works the same.

Also worth noting is that over a session of shooting, the Rhino gets hot fast. Between the thinner frame of the cylinder and the light construction, this is to be expected, but it can sneak up on you. I’d also advise users to be cautious with the ejector rod. It’s spindly, and I haven’t had an issue with it, but I wouldn’t mash it with the confidence I do on my Security Six. 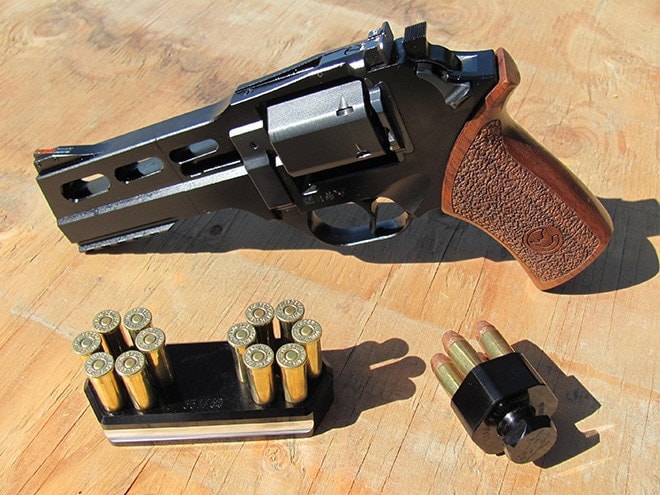 So, the trigger is great, or it sucks. But beyond that and eliminating human factors as much as I can, I also want to say that the Rhino is superbly accurate! In a ransom test, it shoots exceptionally well, better than any handgun I own when loaded with .38 wadcutters. While this is by a narrow margin compared to my next most accurate gun, it impressed me. Usually you can’t blame a gun for poor accuracy, and this is half-true with the Rhino—I’d spread the blame for poor groups between my own ineptitude and the double-action trigger.

Normally, I really think hard about what a gun is for, who should buy it, and if it’s a good value. The Rhino clearly sits outside this perspective as it’s a novelty gun. It offers some cool ideas on a platform that doesn’t offer significant improvements over lower-priced, tried-and-true alternatives that are more accessible to most people. But I don’t think anybody is considering a Rhino as their first handgun. If you are, let me say—stop.

But if you’re like me and you’re a bit of a gun hipster, or just love revolvers and want something different, the Rhino deserves a look. Not necessarily because of performance, or filling a role—but because it’s weird and cool, and sometimes that novelty is enough.