If two is better than one, then three must surely be sweeter.  That’s what Chiappa thought when they released their line of triple barreled over-under shotguns.  Yes, a three-barreled break action shotgun.  Thrice the fun, theoretically.

Are three barrel shotguns just a lingering fad or the cutting edge of a new generation of weapons? This is the question I sought an answer to in this testing. 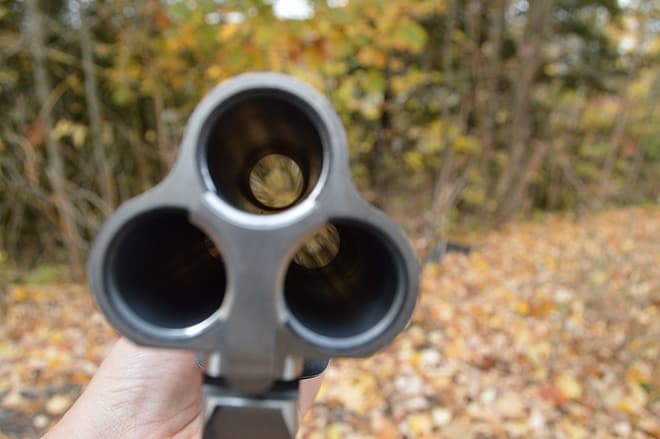 Chiappa is an Italian company with an American presence in Dayton, Ohio.  They are most well known for their reproductions of historic arms and also their love-it-or-hate-it Rhino revolver.

Now, they have the only mass-market three-barreled O/U.

While they are not the inventors of three-barreled design, Chiappa has introduced not just one, but multiple versions of the triple.  There’s the Triple Crown in both 20 and 12 gauge chamberings with 26” and 28” barrels, respectively.  Then the unique Triple Threat in 12 gauge with its modular stock making it both Mare’s Leg and shot defense gun. 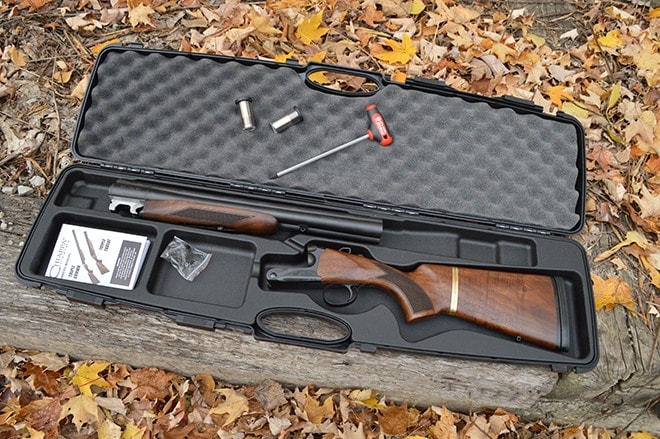 Our test gun is perhaps the most intriguing of the lot—the Triple Threat.  It’s a 3-inch, 12 gauge break action shotgun.  The three 18.5” chrome-lined barrels are each equipped with Rem-Choke interchangeable chokes.  Chiappa includes a set of five in SK, IC, M, IM, and F. The single mechanical trigger fires the barrels in a right, left, top sequence.  A top tang safety and fixed brass bead are the norm.  The barrels and receiver wear a matte blued finish, while the stock is checkered walnut.  The complete package weighs just over eight pounds and comes neatly packed in a compact hard case. 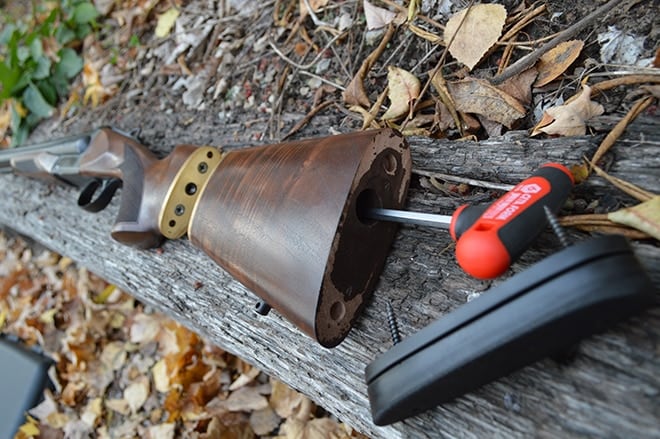 What sets the Triple Threat apart from the crowd is its length and style.  The Threat is essentially a compact defensive configuration with hunting capabilities and is defined by its clean walnut stock with the very noticeable, albeit classy gold metal band through the middle that allows the full stock to transform into a pistol grip reminiscent of the old Mare’s Leg. 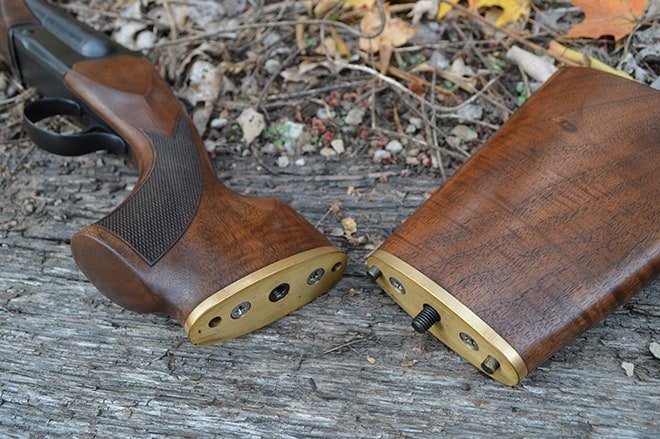 The gun is broken down by removing the buttpad with a screwdriver through open-access pad holes and then using the provided extended length wrench to remove the two buttstock bolts.  Though not difficult, the process is not something done on the spur of the moment and I can’t see users making that stock swap with daily regularity.  Having the option, though, is a boon and one I value as on this gun–especially when you get the urge to be a little Steve McQueen-ish, don a long coat and shoot 12’s from the hip. 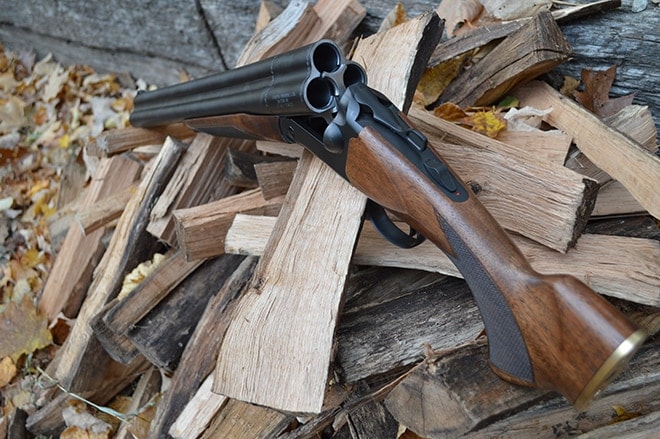 The overall length of the pistol-grip version is 27.75 inches while the full shoulder stock puts it at 35.5.”   Length of pull with the shoulder stock is 14.25. Drop at heel is 2.125” and drop at comb is 1.125.”  Because the Triple Threat’s measurements exceed the 18” barrel and 26” overall length, there are no restrictions or tax stamps needed.  The MSRP on the Triple Threat is around $1600, with real world prices closer to $1500.  Regardless of intrigue or potential hunting uses of the Magnum triple versions, prices of these interesting O/U’s will continue to be a market hindrance. 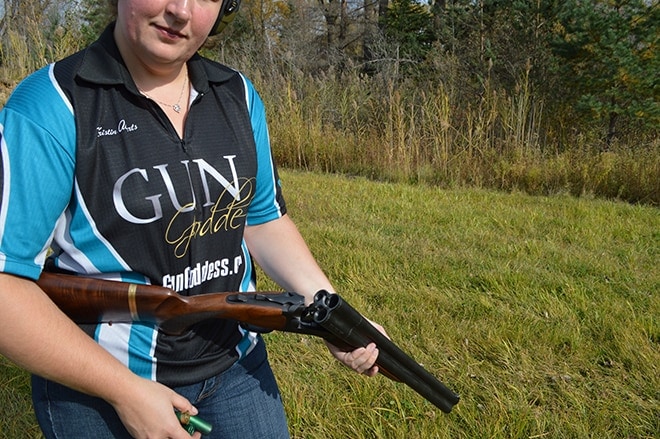 We weren’t sure what to expect with the Triple Threat.  While the Triple Crown with its sporting length barrels would make much more sense on the clays course or even in the bird fields, we felt compelled to give the Threat its dues.  The gun is surprisingly well balanced and comes up with ease in its full configuration.  Certainly, the short barrel length of the Triple Threat limits its use as a hunting or clays gun.   However, it would excel as a bedside gun, western sidearm, or a head-turning novelty.  Though we did not have the opportunity to test the Triple Magnum, there’s great potential for waterfowlers, as I know many duck and goose hunters who sacrifice capacity for reliability in trading a semi-auto for a O/U.  The Triple Magnum would eliminate the need to sacrifice, still granting the legal three shot capacity with the dependability of a break gun. 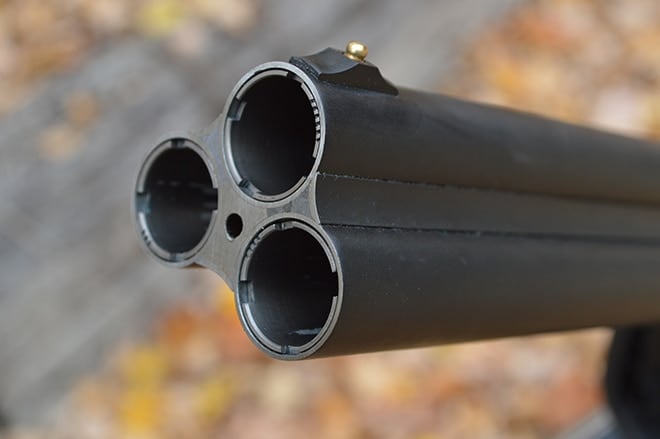 Back to the gun at hand, the Triple Threat patterned very well at defensive distances with the included chokes and we even tried out extended Carlson tubes.  Of course, with 18.5” barrels, sporting patterns at average sporting ranges are not stellar.  Regardless though, the Triple Threat ran flawlessly, as expected. The workmanship on the gun looks and feels quite stellar, and the wood-to-metal finish was exceptional. Chiappa obviously put some time into making this a quality firearm.  While all the tangibles were there, the only thing holding any of our testers back is the price.  Should price ever come down, we can really see the triple barrel break design catching on not only in the defense market, but in the hunting world as well.  Heck, it may even have a place as a packable survival gun. 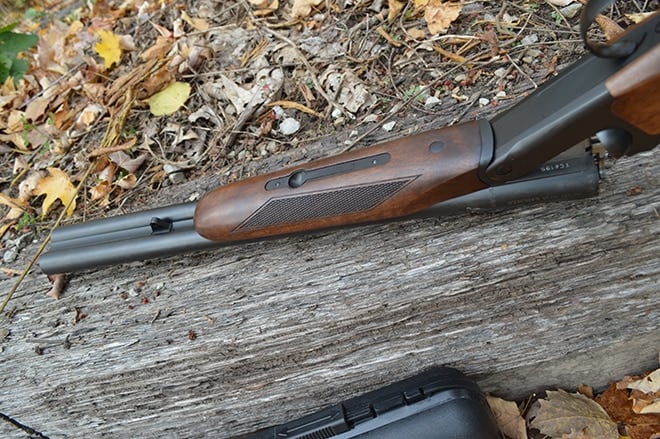 Forend detail. I found this gun to be surprisingly balanced. (Photo: Kristin Alberts)

The forward weight of the three barrels cuts down on recoil without making the gun overly front heavy.  Its short length made it very maneuverable, and it would do well as a very wieldy brush gun.  Though it takes some practice to get accustomed to shooting in the pistol grip shortened configuration, the gun is surprisingly manageable from the hip.  Extractors lift the empty hulls for removal, and we did not see any need for ejectors. 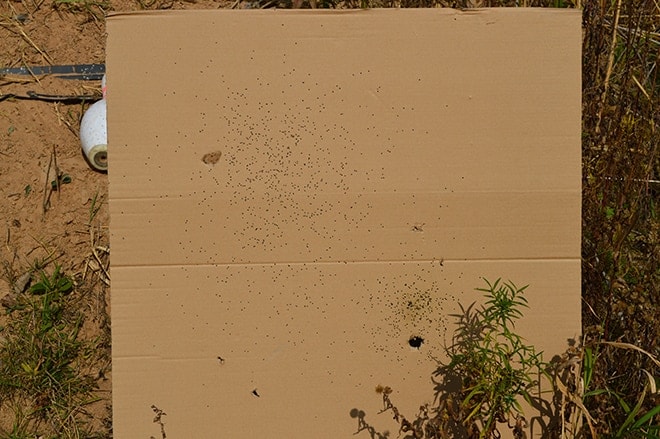 Patterning board for our Triple Threat test. All in all, a very effective short range self defense gun. (Photo: Kristin Alberts)

Paper targets put out at ten to fifteen yards yielded patterns ranging from 5-12” inches depending on the chokes with the full stock.  It took surprisingly little practice when broken down to the Mare’s Leg to plug center mass from the hip at those distances.  Practical?  Not so much.  Fun?  Without a doubt.

The matte blued finish receiver is plain but well done and the stocks are utilitarian but above average in wood quality.  The gun fires absolutely as fast as you can pull the trigger.  An added benefit for hunters, especially with quickly moving quarry, is the ability to utilize the barrel sequence and move your choke selection outward so that the first shot is IC, then M, then F.  Opening the action resets the mechanical trigger mechanism to trip each firing pin once, regardless of how many rounds were initially fired. If you can’t do it after three shots, it may be time to reconsider. 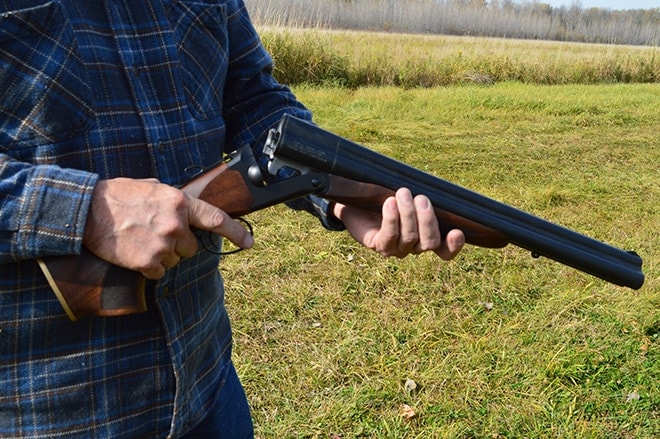 Shooting the Triple Threat from the hip. (Photo: Kristin Alberts)

We just reviewed the new DP-12 double barreled pump gun.  Now the Triple Threat from Chiappa.  Have we reached the time of “one too many”?  I say, not yet.  Not only is the Triple Threat an eye catcher on the range and in the field, it’s a very well-made higher end performer.  While cost will be prohibitive and most folks will likely never feel the need for a triple barreled O/U, they have their merits for flawless self-defense, reliable wing shooting, or just plain conversation factor.