In 1976 the United States celebrated its bicentennial. Apple Computers was founded by Steve Jobs and Steve Wozniak. The Philadelphia Flyers defeated the Red Army at the Spectrum. Jimmy Carter was elected president and my Colt SP1 AR-15 left the factory in Hartford, Connecticut. Forty-one years later and this Colt is now considered a collector’s piece.

Today we have a dizzying array of “black rifles” to choose from and still, there are shooters who shout (sometimes angrily) that people should “just build their own AR.” This underlines a point — a discerning group of shooters have decided that this current crop of AR rifles simply aren’t for them. This is for a variety of reasons. Perhaps they already have a tactical carbine? Perhaps simplicity appeals to them? Or perhaps they’re simply driven by nostalgia; they find their answer in the past.

For these folks it’s not uncommon to build a replica of an early generation AR-15 out of a variety of new and/or surplus parts. Yet many collectors want the real thing — and will pony up the cash for a genuine example of the original “black” rifle. 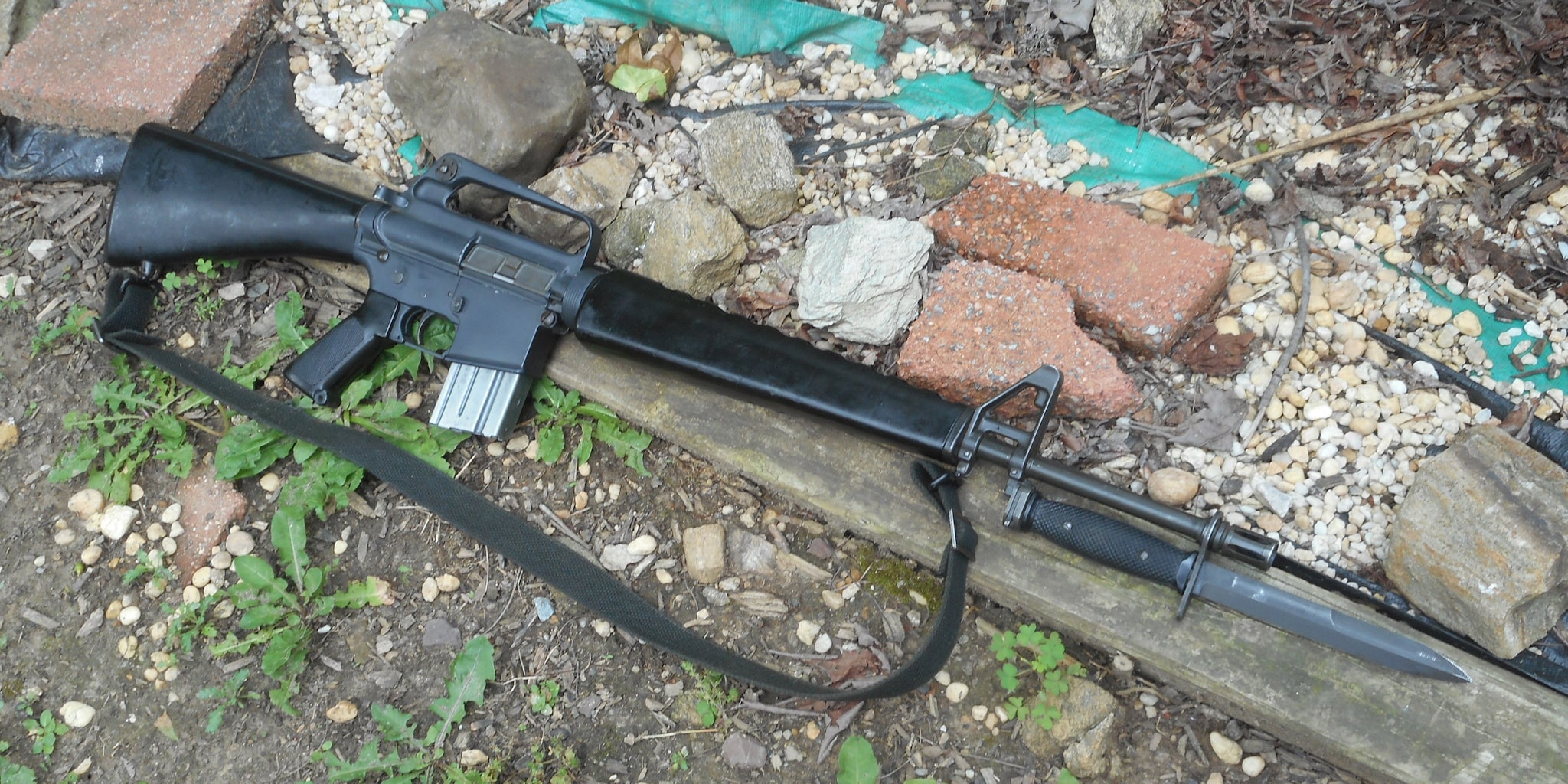 All kitted out. (Photo: Francis Borek)

The Colt SP1 shown here is one of the earliest available AR-15 rifles offered to the general public on a wide scale. Colt took two directions in marketing this rifle: As this was an era where gun ownership was typically equated with hunting, the rifle was marketed to private citizens as a lightweight, space age sporting arm. It’s construction and appearance were indicative of the future and its featherweight status was supposed to appeal to campers and hunters. For law enforcement, it was marketed as an accurate, handy, powerful and light recoiling carbine. Colt sales reps would even place the stock to their chin and fire off an entire magazine in front of police officers to demonstrate the light recoil. 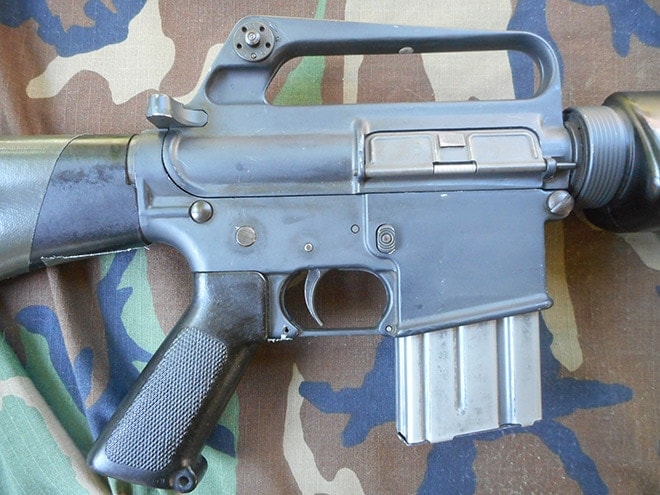 The reason for the slabside and slickside nicknames by collectors. (Photo: Francis Borek)

Unfortunately, memories of the recent war in Vietnam were still fresh. Among those memories was the utterly disastrous introduction of the M16 into service and how that could be seen as a metaphor for the war itself. Thanks to problems with the ammunition and the idiotic decision not to issue cleaning kits, the M16 initially gained a poor reputation. After fixes were initiated, the rifle’s reputation improved and many came to appreciate it’s light weight in the humid jungles of Southeast Asia. 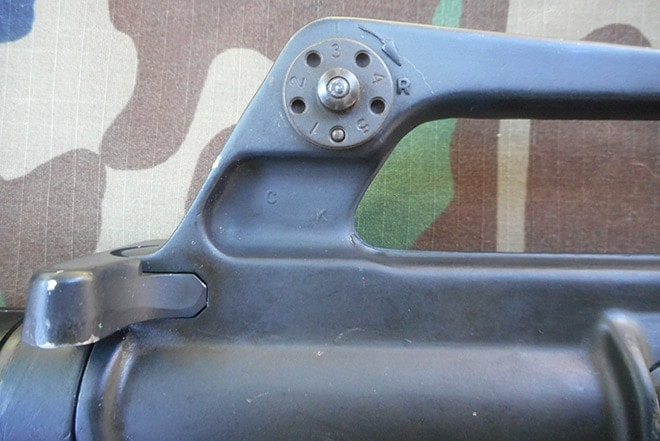 The rear sight only adjusts for windage. The markings also indicate the upper was forged for Colt by Kaiser Aluminum. (Photo: Francis Borek)

Yet many still remembered the rifle’s poor initial showing and shunned the AR-15. Others were more familiar with the M1 Garand and M1 Carbine and the AR’s appearance turned off many shooters — the rifle was simply too different and ugly to add it to their collection. Additionally gun buyers were more than content to purchase new or surplus M1 Carbines or Bill Ruger’s newly introduced Mini-14 instead. Armalite also offered it’s AR-180 as an alternative. Though it may sound strange, the AR-15 was not once the universally accepted rifle that is today.

Although this is an AR-15 rifle, it is a bit different from what most shooters are familiar with these days. Outwardly, the rifle looks like most AR-15s, but as one comes closer the differences are apparent. Gone are the forward assist and shell deflector making this a slick side upper receiver. The rear sights are only adjustable for windage. The fixed stock appears to be the same as seen on later variants, but it’s still different. This solid stock has a hard rubber buttpad, a sling swivel instead of a fixed loop, and no provision for storing a cleaning kit. 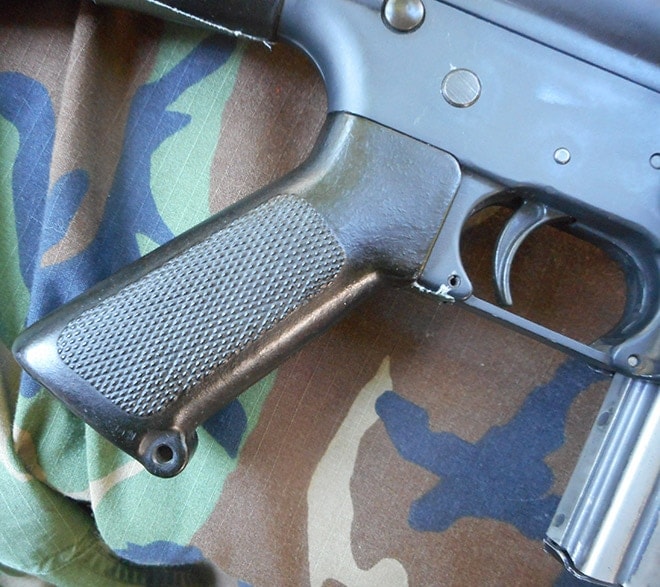 The handguards are triangular shaped and probably the most distinctive feature of the rifle. They provide a solid flat surface when resting on an object and are heat shielded. Some might not find them comfortable. Conversely, some may find them to be the most comfortable AR handguards ever. They are also inconveniently separated into distinct left and right halves instead of symmetrical halves which can be used for either side. 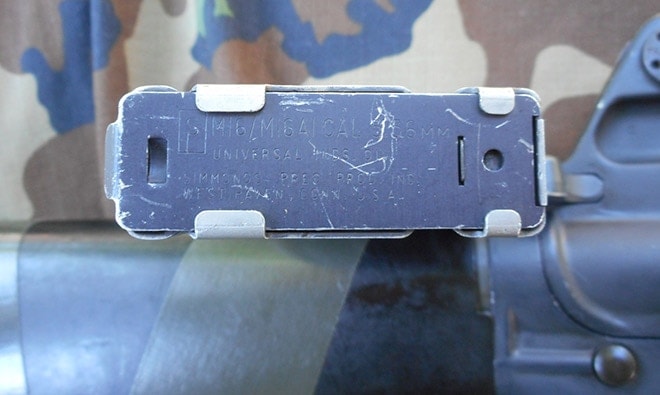 The thin pencil barrel is chrome lined and features a glacial twist rate of 1-in-12 inches. The A1 pistol grip lacks the annoying finger ridge found on the A2 grip, and has a provision for a sling swivel. Finally the lower receiver is a slab side receiver, lacking the magazine button fence. The rifle is all original, just as the day it was delivered. 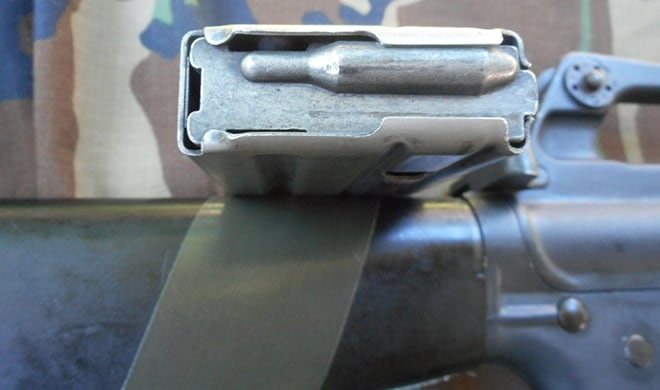 One other difference is that the forward receiver pin is actually a pair of screws. It is unknown why this is so, but there are two prevailing theories: The first is that the US Army asked Colt to do this in order to prevent soldiers from stealing upper receivers and using them on privately owned SP1s or vice versa. The other is that Colt did this as a form of intellectual property protection, so that another company’s upper receiver wouldn’t work on a Colt SP1 lower. 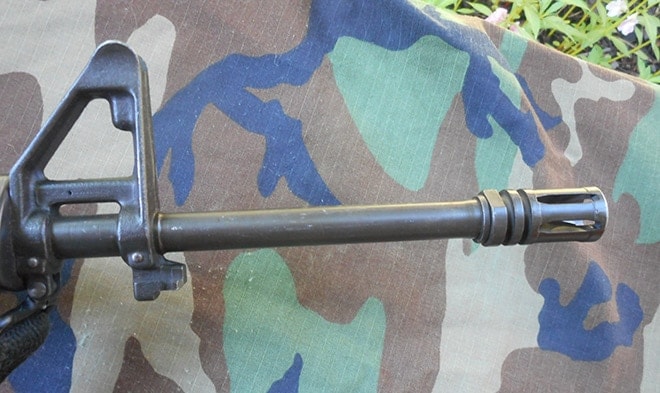 On the range the SP1 is almost like your typical AR-15. Almost in that most shooters are more accustomed to the shorter barreled carbines instead of 20-inch barreled rifles. The SP1 has the benefit of a smoother recoil impulse from the longer barrel and the rifle length gas system. Yes, it’s an AR. But it just feels a little different.

Though any M16 bayonet will fit, the M7 along with the M8A1 scabbard are the most appropriate for the SP1. (Photo: Francis Borek)

Also, if you’re shooting prone, watch for the dust that will be kicked up by the A1 flash hider. Stock AR triggers are typically gritty, heavy, and miserable. However one of the benefits of buying an old, used AR is that they’ve been shot enough for the triggers to have smoothed out from use. They’re not light, and far from match quality; but they are quite a bit better from stock.

As for performance, a five shot group from the bench at 100 yards with American Eagle 55 grain FMJ (the AR-223 load) pulled in a 2 inch group. Wolf Gold 55 grain FMJ pulled in another 2 inch group as well. Steel cased and burning dirty, Tulammo 55 grain JHP brought in a 3 inch group. Yes, this rifle can and will shoot if need be. I didn’t test any heavier bullet as the common M855 load is the very reason why the US Army went from the 1-in-12 to the 1-in-7 twist, as the slower twist has a bit of trouble stabilizing the longer, heavier bullet. 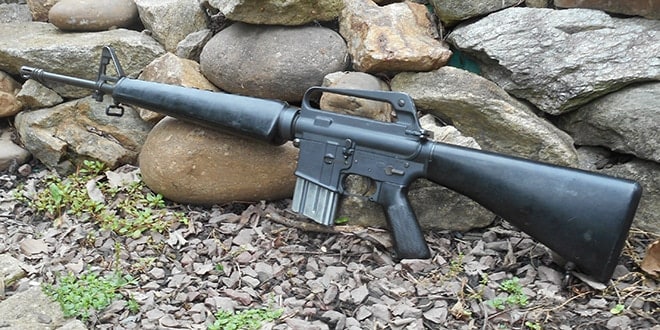 “Things are never quite the way they seem…”

It’s amazing that one of the most popular rifles in the world — a rifle that is used as an example of the cutting edge of technology — is more than a half century old. We have come a long way from those days and there are many, many offerings in the AR market alone. Yet while the SP1 is an AR, it is still different enough from what we see today that it remains in a class of it’s own. It’s simplicity, light weight, and accuracy make this rifle a viable enough option, even in today’s world where everyone demands the kitchen sink on their rifle. I suppose that the old adage “the more things change, the more they stay the same” applies to the old SP1.