Snake guns could not be hotter these days, and with the revived Cobra, Colt makes their first re-entry into the beloved reptilian market.  Can the new Colt Cobra hold a candle to the original?

The double-action, stainless steel Cobra revolver is built for concealability. The small-framed, two-inch barrel, and unloaded 25-ounce weight makes this an ideal carry gun or backup arm. The Cobra holds six rounds — one more than comparable revolvers — and is rated for the hotter +P .38 Special defense loads.

The Cobra features Hogue over-molded grips, which make this pocket gun more controllable than its counterparts, comes equipped with a red fiber optic front sight but a Tritium upgrade partnered with the old-style trench rear is also available, and the clean matte stainless is currently the only available finish.

The gun comes packed in a much larger than necessary Colt blue plastic case. MSRP is $699, and unfortunately, real world prices at some retailers are even a few bucks higher due to the demand still outpacing availability.

While outward appearances of the original and new Cobras are not terribly different other than in exterior finish, the internals bear little resemblance to one another. Tearing down the new Cobra for a thorough examination of internals reveals a new style, but more of the same quality work. 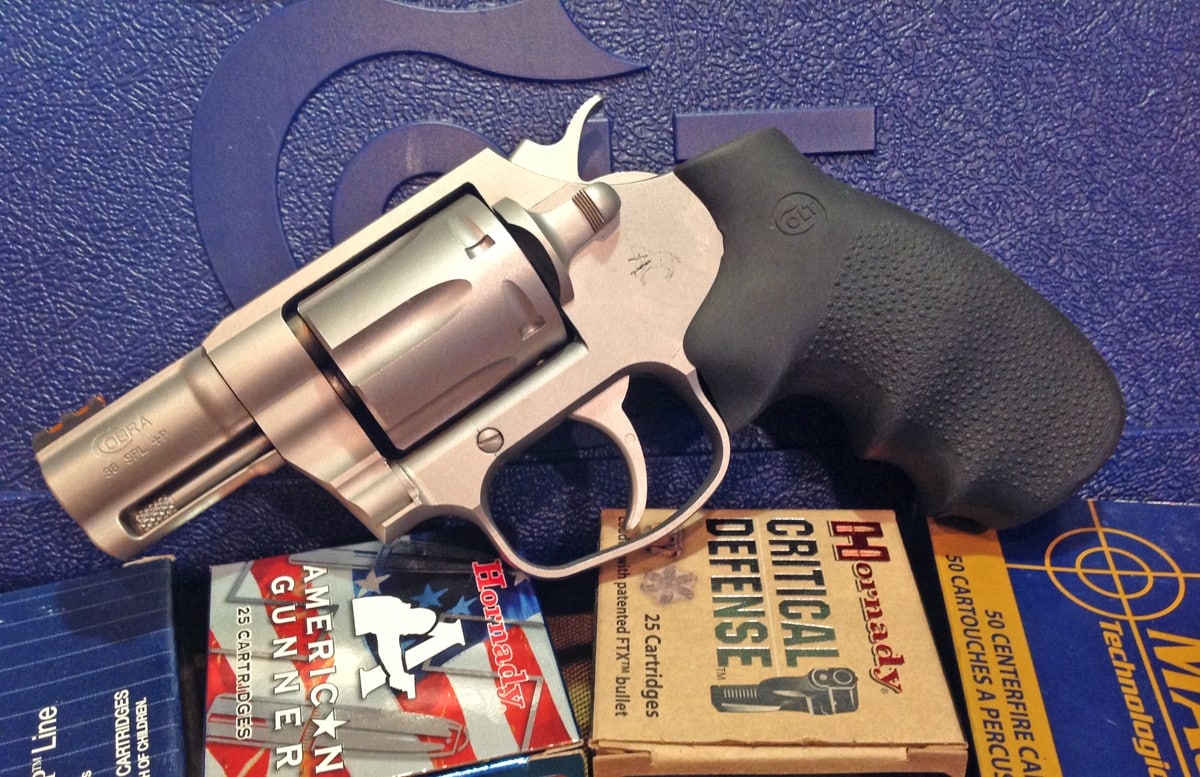 The Colt Cobra snubbed nose revolver. Although we expected no less than perfection, the Cobra fired all ammo with 100 percent reliability. (Photo: Kristin Alberts/Guns.com)

For starters, the entire mainspring design, length, and connectivity is completely redesigned to what Colt calls the LL2, or linear leaf spring intended to create a smooth and even trigger pull. Both the hand and transfer bar also look different, yet tolerances seem no less precise.

For those who like to examine — or tinker with — their wheelguns, the Cobra dis-and-re-assembles quite easily. Astute students of modern firearms and basic metallurgy will recognize the tiny round proof marks on the hammer, trigger, and sear as denoting Metal Injection Molding.  While this is neither a great positive nor negative, the more expedited process likely allows faster and more affordable production and control over parts that govern the silkiness of the revolver.

Getting to know the baby snake

Whether or not internals are of concern to the average shooter, performance does, and the Cobra gets the job done well. Trigger pull is rated from the factory at seven- to nine-pounds in double-action and three- to four-pounds fired single-action.

Speaking of trigger pulls, this is where the Cobra sets itself apart from its competitors.  Ours broke right at 3.6 pounds in single-action and consistently just a hair over seven pounds in double on our Lyman pull gauge. Hammer pull and mechanics were slick and sound, with a nice fit and finish both externally and internally. 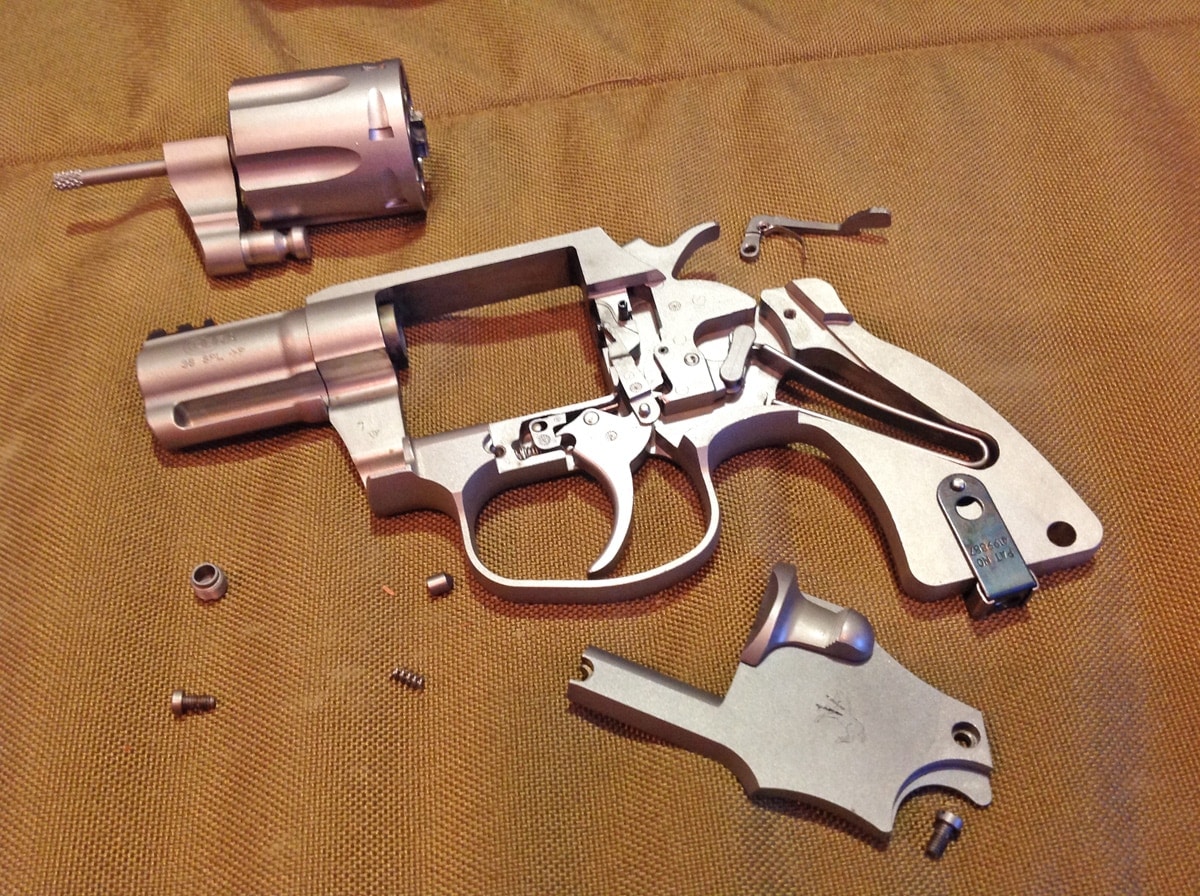 Ergonomics on the new Cobra are exceptional, with the combination of the grip angle and extended Hogue over-molded grips making it at once controllable and comfortable.  The short ejector rod is housed within the integral barrel shroud, and as such, is well protected.

The revolver points easily, and the factory red fiber optic is quick to acquire on target in daylight. Because many snubbies find their way to defense guns, low-light night-sight options are a big plus, making Colt’s available Tritium backup would be a welcome upgrade.

With a goodly amount of doubt that modern mass production could hold a candle to the original, labor-intensive custom-shop work, off we went to the range with the new Cobra.  In short order, the steel was singing on the range with a mix of ammunition. The new Cobra just plain likes to stay on target, and while I don’t think I’ve ever said this of a short-barreled revolver, is actually enjoyable to plink with on the range.

The Colt Cobra measures in with a two-inch barrel putting the overall length at 7.2 inches and weight at 25 ounces. MSRP is $699. (Photo: Kristin Alberts/Guns.com)

Muzzle jump and the flip associated with smallish revolvers is nonexistent with the Colt, making it a friendly companion for newer or weaker-handed shooters, as well as traditional wheelgun fans. The snaky Cobra is one controllable reptilian on the range, and for once in a very long time, shooting hundreds of rounds through a snubbie on the range was a treat rather than a chore.

We fed our Cobra a mix of Hornady Critical Defense 110gr FTX +P, Federal Premium Personal Defense 110gr JHP, Winchester 130 grn FMJ, Fiocchi HP, and Sig Sauer Elite Performance 125gn V-Crown HP +P. Accuracy was as good — and in most cases, better – than you’d expect from any such revolver in double action. Firing single action clearly defined the baby wheelgun, due in large part to the trigger and ergonomics of the Cobra. Five-shot repeatable groups within a two-inch circle at reasonable defense distances were no problem in single action, and opened up only slightly when firing for speed in double mode.

Whereas range time with +P loads in short barreled wheelers is an unpleasant proposition, the Colt’s built and slightly heavier weight negated the extra recoil. Needless to say, function was 100 percent, and coming from somebody who has fired hundreds of rounds from the little .38’s on the market, the Cobra was easily the least whippy, most controllable, and sweetest trigger pull on the market. There’s ample room in the uniquely-shaped trigger guard to shoot safely with gloves, which was especially nice during our cold weather testing.

My current go-to carry gun is a Smith & Wesson J-frame Airweight .38, which I love. However, the Colt is hard to put down. The trigger is smoother and superior, especially in single-action mode. Having one additional round may not be a huge boon, but it sure doesn’t hurt, and I was pleased that the even though the Cobra has a slightly larger frame, it fit snugly into my current supply of IWB, OWB, and ankle rigs. Get yourself some new speed loaders, and you’re set for a whole lot of fun and solid training.

The old, the young

While there’s no replacement for the deep blue of an original snake gun, Colt has piqued the interest of collectors and shooters as the snake gun craze continues to surge.  They spent many years planning before finally re-entering the double action revolver market, and did so with this capable, concealable, smooth shooting snub.

Though we’re writing this nearly a couple years after Colt first leaked news of the Cobra, and the gun has appeared in publication and on a few dealer shelves, demand outclasses production. So, if you plan to be a soothsayer for this small snake, best get one on order now – unless you want to wait to see what’s next.