Sub-gauges like the 28 are more en vogue than ever these days and, while usually marketed and priced toward a higher-echelon clientele, guns like the CZ 628 Field Select are changing things.  With upgraded wood and a host of chokes partnered with a bargain price tag, this dedicated bird gun is hoping to shake things up in the smaller-bore game.

Both are built on gauge-specific 7075 aluminum actions, meaning lightweight is the name of the game, with neither going over 6 pounds.  Each comes with a full set of interchangeable chokes for the ported 28-inch barrel.  Both guns hold four rounds in the tube with one in the chamber. Metalwork is finished in a fairly standard gloss blue, and there’s the typical crossbolt safety behind the trigger.  Our favorite part, however, is the select-grade Turkish Walnut stocks, which show much more character than one would expect on a field-hunting pump gun. 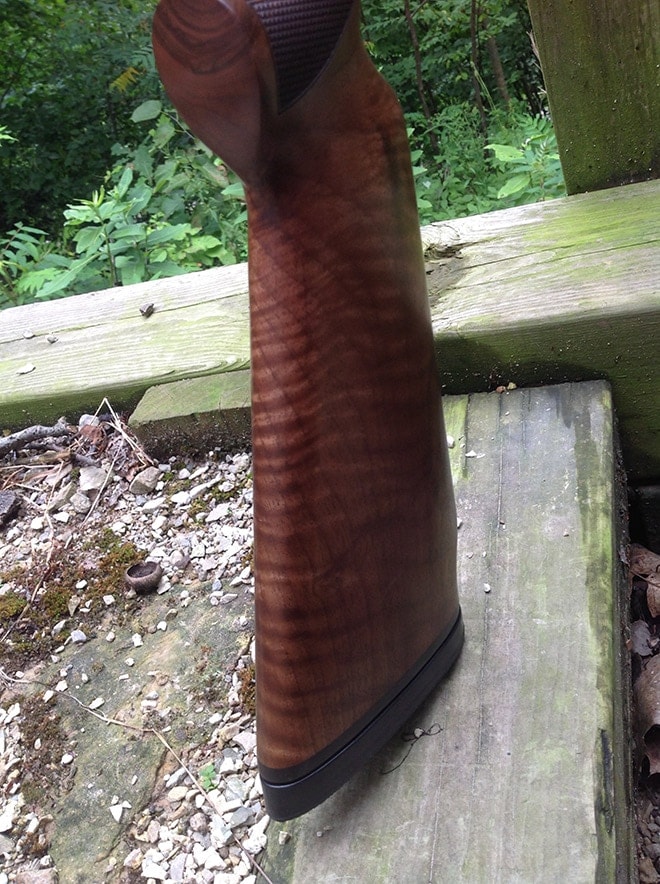 While both the 620 and 628 are slated to come with above average wood, the buttstock on our test gun shows exceptional figure. (Photo: Kristin Alberts)

MSRP is the same for both at $429 and, though the guns are just now shipping, online retailers are already listing them closer to $375. 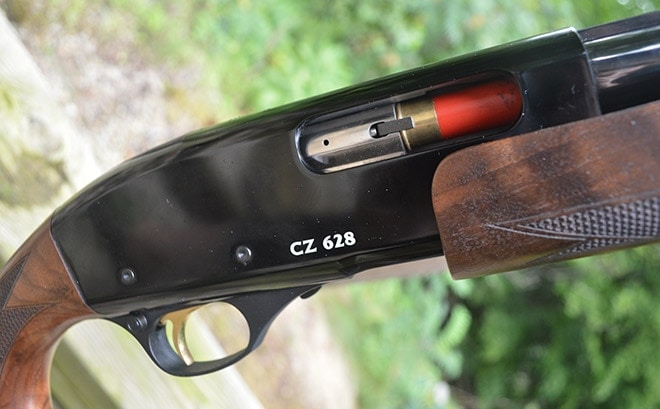 Four rounds in the tube, one in the chamber. The 628 pump 28ga is reliable in its function and classy enough in appearance to hang with the big names. (Photo: Kristin Alberts)

We first got our mitts on CZ’s new feather-light pumps at SHOT 2017, and while the 20-gauge may be the most practical option for most upland hunters, the 628 was just too appealing to pass up.  Ideal for quarry like grouse, woodcock and other smaller upland birds, the gun may also hold intrigue for clay shooters with a penchant for slides. 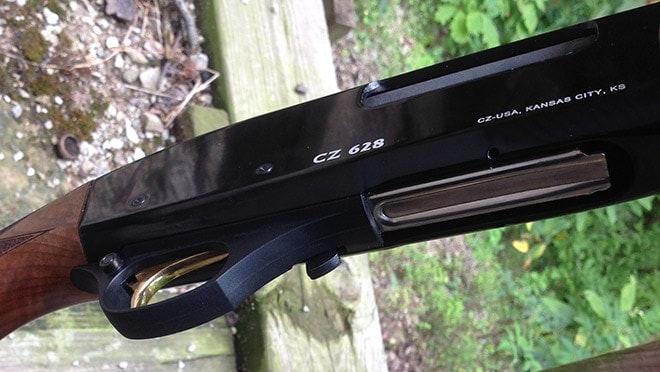 The 628 feeds quickly through the bottom, and controls are easy to access and use in the field. (Photo: Kristin Alberts)

Though we didn’t expect the fancy wood on display at the show, our test 628 Field Select came out of the box with better wood than that on some of my competition shotguns at three times the price. The furniture’s satin finish is smooth, while the checkering is both decorative and lends the gun grip for hunting conditions. There’s a rubber buttpad that absorbs the already-light recoil. A gold-plated trigger is a nice touch. The ported barrel, something you only expect on bigger bores, may not truly be needed, it is a thoughtful addition. If it helps keep you on target, so much the better.

Though a budget guns, it has all the frills…interchangeable chokes, vent rib, ported barrel. (Photo: Kristin Alberts)

However, looks don’t make a gun — though they sure don’t hurt either — so we really took this little guy to task. At the patterning board, shooters can accomplish pretty much anything they desire with the stockpile of five chokes included—Skeet, IC, Mod, Light Mod, and Full.  The 28-inch barrel is longer than many 28 gauges on the market, but I prefer it that way for balance while swinging with fast-moving targets.  Game birds like grouse usually get a move on me before I’m ready for a shot, which means quick shouldering and swinging are a must in an upland gun. 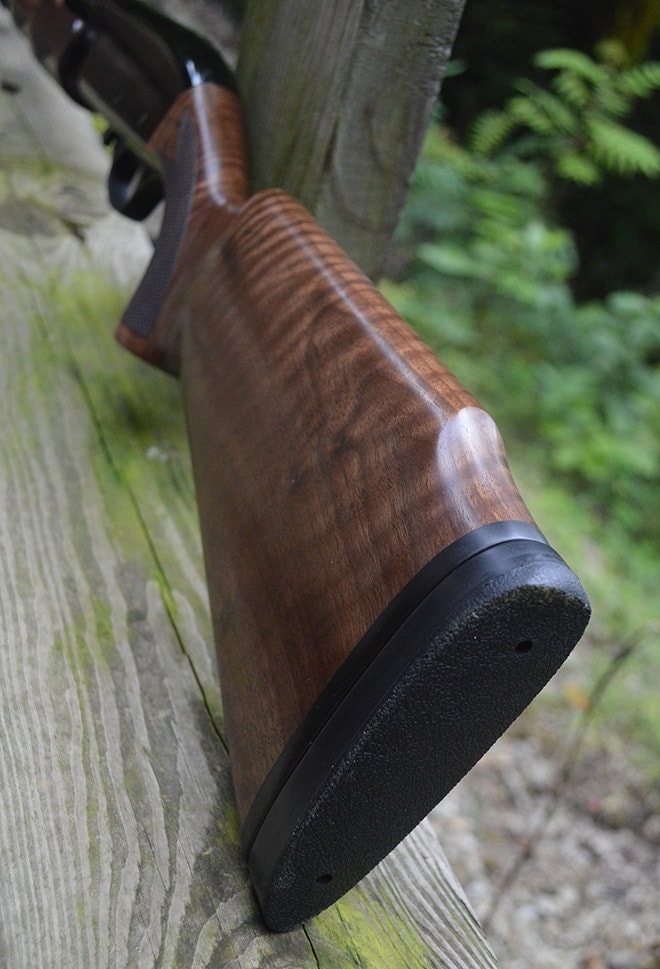 Partner the build of the 628 with the gun’s surprisingly light weight — a scant 5.4 pounds empty — and you have a gun that is a joy to carry afield all day without worry of fatigue.  When birds flush, it’s a quick mount to the shoulder where targets acquire naturally along the 8mm flat vented rib with a simple white front bead.

Takedown is pretty much the same as any standard pump action, with two receiver cross pins dropping the trigger group and the forend removing the bolt.  There are no extra moving parts to complicate things, and not much that can go wrong, making the 628 a snap to clean. 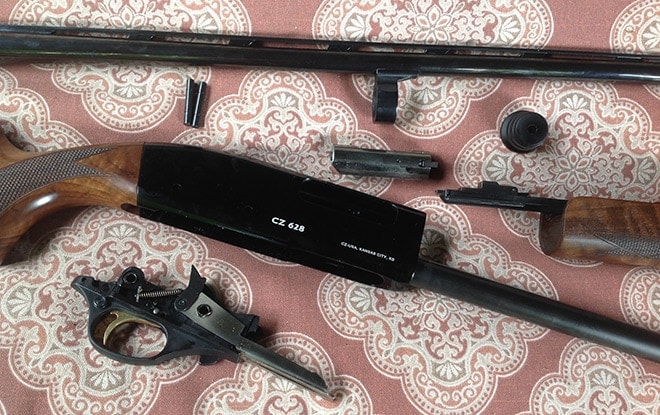 The 628, as with most pumps, disassembles very easily for a quick field cleaning. Very little to go wrong with this little slide gun. (Photo: Kristin Alberts)

Though our T&E time did not overlap with any birding seasons, we did give the little 28 a good run on the range and clays courses, letting loose a total of 300+ rounds.  With ammo including Winchester Super-X High Brass #5, Winchester AA #8, and plenty of reloads, the gun ate and spit as we’d expect any pump.  Between the porting and recoil pad, even the stoutest 28-gauge game loads show negligible recoil. Even after changing hands many times and significant abuse, the gun was no worse for the wear.

The 628 feels fine and balanced in the hand, comes up quickly, and as a 28-gauge, shoots with nary any recoil.  It shot to point of aim on clays, and we had occasion to try out multiple chokes for varying targets.  Each shot just as well as one would expect for factory tubes and it’s a big plus to get five chokes — an even bigger plus to get that many with a gun that sells for under $400. 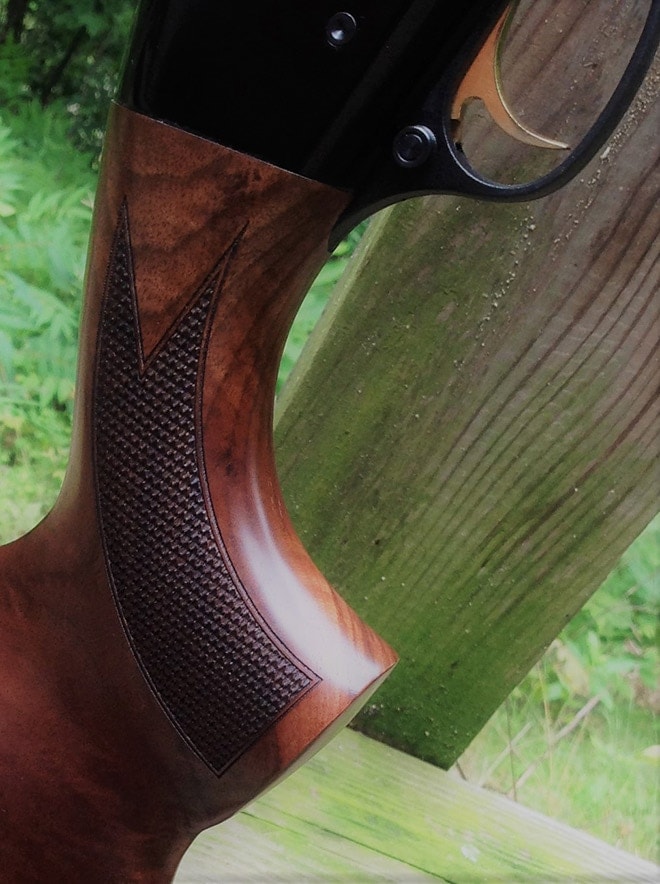 The checkering pattern is subtly unique, and the gold trigger is a nice finishing touch for this upland gun. (Photo: Kristin Alberts)

The only knocks we had on the gun could well be another shooters’ high points.  For one, the 14.5-inch length of pull (LOP) is on the long side for me, especially when running a pump.  While the stocks are beautiful in both wood choice and shapeliness, the curvature of the full forend can be a little difficult to grip for smaller framed shooters already duking the longer LOP.  The answer to that is a simple cut down at a gunsmith.

The pistol grip is a nice touch, as I’m not a fan of English style straight stocks found on many upland guns.  Even though the gun didn’t fit me perfectly, I still had a ball shooting.  With a little practice we all had great success. Everybody who picked up the 628, from the gun shop to the course, was impressed with the overall finish and feel of the gun. And of course by the bargain price as well.

Our 628, like other CZ shotguns, was built in Turkey.  The CZ-USA division of the Czech company, however, has headquarters in Kansas City, KS and that location is clearly marked on the right of the receiver. The Akkar Turkish imprint sits on the left side of the barrel.

Like all CZ’s, the 628 is made in Turkey, but the company maintains a base in the USA. (Photo: Kristin Alberts)

Per standard CZ-USA warranty jargon, all firearms are covered for 1 year on wooden parts and surface treatments and 5 years on other parts to the original purchaser.  We did require a warranty return several years ago through the fault of the shipping company, and CZ turned-and-burned on fixing and repairing a damaged rifle. I think this speaks well to the company’s concern for satisfaction.

As I see it, the CZ 628 Field Select suits two groups best.  One, the serious upland hunter looking for a sub-gauge gun that will look good and perform in the field — also one they’re not afraid to drag through the woods while the $2000 double sits home. Or two, those relatively new to sub-gauges like the 28 and who are looking for a reasonable entry point into the market.  In either case, CZ has you covered. The 628 is light enough to carry all day in the field, fully featured with porting and chokes, quite attractive with its well-figured Walnut, cheap without sacrificing quality, and best of all, it’s a 28-gauge.