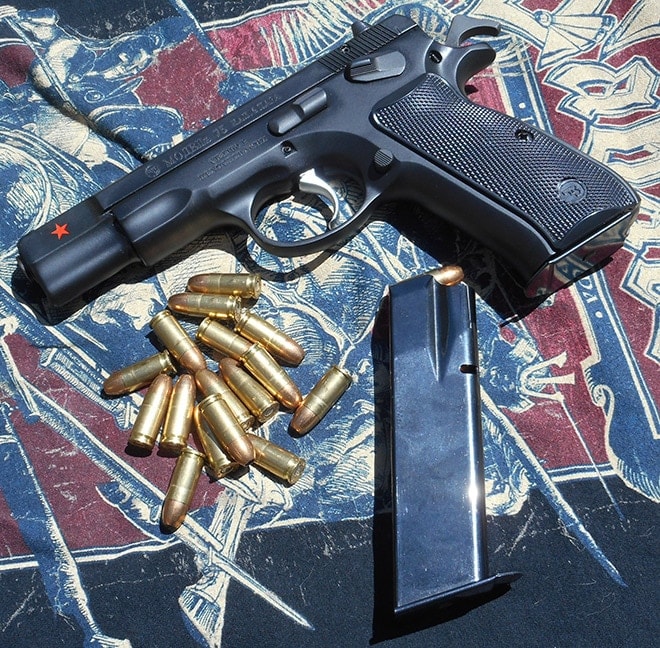 Although there are some who take the shooting world far too seriously, there are many of us who see it as a duality. It can be both a hobby to have fun with and help us relax , whilst also being a practical, very serious application of life and liberty. The handgun I’m reviewing here is an illustration of this duality — a proven design, perfect for practical usage despite it’s commemorative nature.

My interest in both Cold War history and the manga Gunsmith Cats helped to influence my purchase of this Cold War Edition CZ-75B. Rally Vincent never carried a CZ-75B, preferring a first model CZ-75. Likewise, the ‘B’ model wouldn’t enter production until after the fall of the Soviet Union, which makes the designation a bit puzzling. It is however a full-size, all-steel CZ-75 — and that is good enough for me.

To put it in the spirit of the Cold War, CZ cosmetically modified the basic design of the CZ-75B for this pistol. The most noticeable changes are the bright red stars on the slide and the Soviet hammer and sickle on the frame. These engravings are filled with a red lacquer and the roll marks on the slide are in Cyrillic (something that would not have appeared on Cold War-era CZ-75). These special rollmarks and engravings are a subtle, but a distinctive change to the standard CZ-75B. The bright red lacquer contrasts nicely with the typical CZ black polycoat finish. While many associate this special edition pistol with the film Red Dawn, I am reminded of the fictional MiG-28 from the theatrical classic Top Gun. 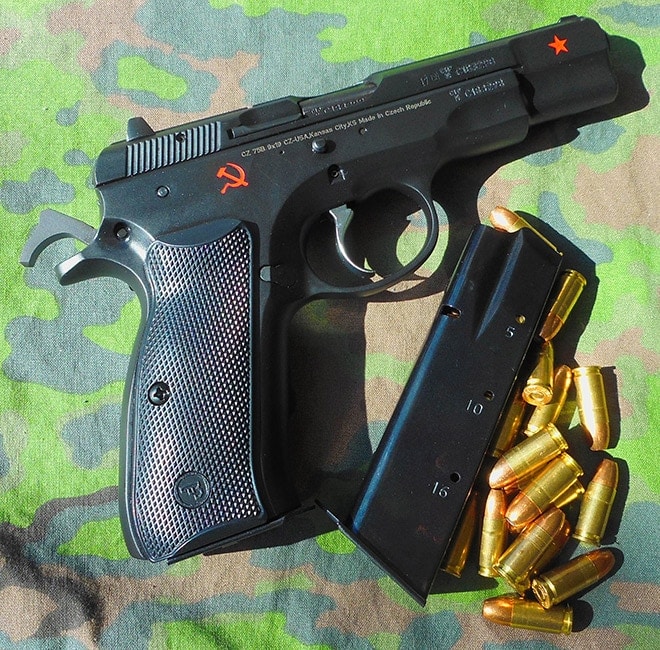 Built with more steel than a T-55 and plenty more reliable too. (Photo: Francis Borek)

The pistol also borrows elements from the older “Pre-B” CZ-75. The squared off trigger guard is gone, replaced by a much more aesthetically pleasing rounded trigger guard. The ring hammer has also been replaced with a spur-type hammer. Even the controls resemble their counterparts on the Pre-B models.

I feel that going for the appearance of the Pre-B is a very smart move on CZ’s part. The squared-off trigger guard on current CZ-75Bs tend to mark against the overall appearance of the gun in my opinion. With the rounded trigger guard, the CZ-75B goes from a strictly utilitarian appearance to one of the nicer looking combat handguns (though that’s not really saying much). The Pre-B was also the most numerous variant produced during the Cold War, and is representative of the CZ-75 family during that era. The one thing missing would be the old-style grip panels. CZ does offer reproductions of the old-style grip panels, but they are rather expensive, retailing for $80. Personally, I would go for checkered wood colored deep-red to match the engraving. 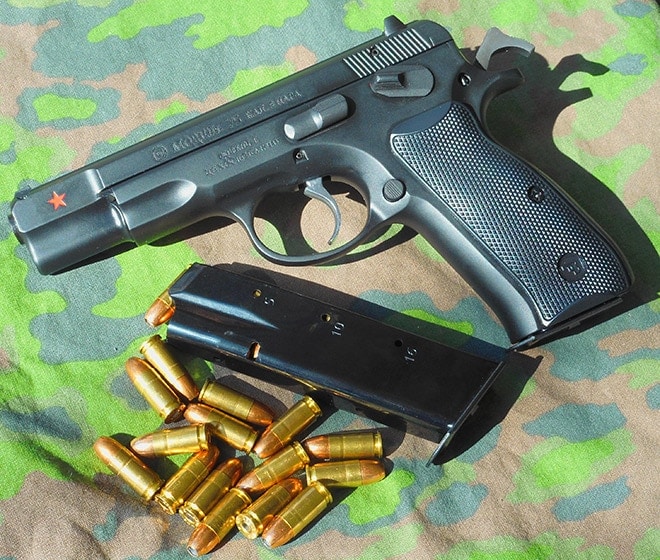 The irony of selling a gun decked out in communist symbols is not lost on anyone. (Photo: Francis Borek)

One reason why I gravitate towards the CZ-75 is because of my old-fashioned nature when it comes to my firearms. I shy away from polymer framed handguns, having experienced too many plastic bricks with triggers far removed from what their advertising claims. I also find many polymer framed handguns to be unbalanced, with all of the weight at the top of the hand instead of spread out. Some shooters will say that polymer frames “flex” to absorb recoil. What really absorbs recoil is weight, and this all-steel CZ-75B has it in spades, far more than most polymer framed handguns. 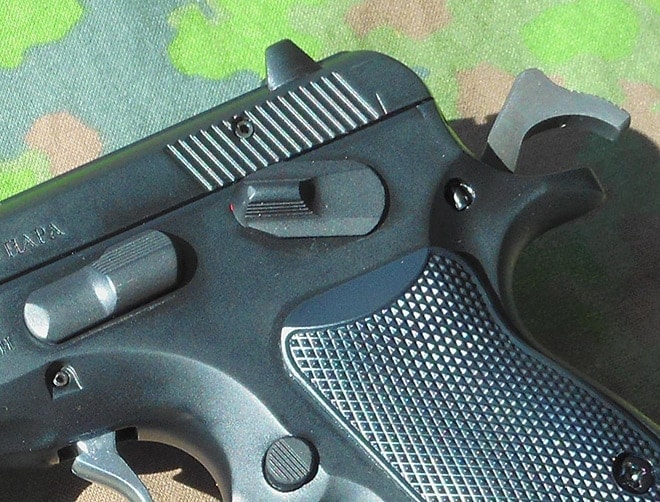 The CZ-75B uses a Browning-style action, based off of the venerable Hi-Power. Even the basic look of the CZ-75B resembles the Hi-Power. The pistol is a double-to-single action design, however, unlike most DA/SA handguns, there is a manual safety instead of a de-cocker. This means if you want to carry with the hammer down, you’ll have to pull the trigger and gently ride the hammer down. Otherwise, you can safely carry this gun cocked-and-locked, just how Jeff Cooper preferred. Magazine capacity is 16 rounds standard, though larger capacity magazines are available from CZ-USA and Mec-Gar. 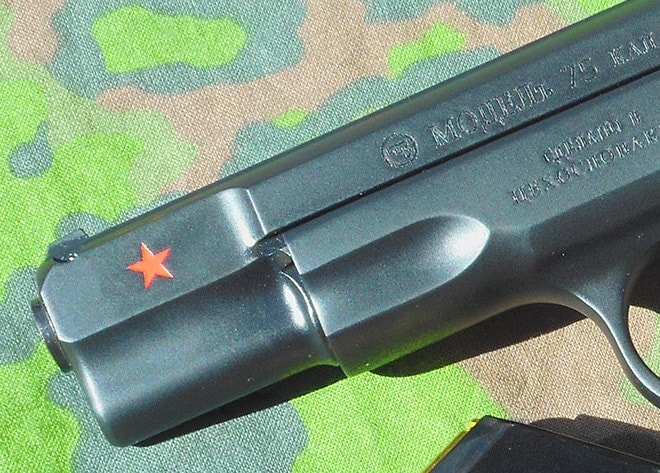 The defining feature of the CZ-75B (and all CZ handguns) is the slide which rides inside the frame. In theory this gives a tighter slide-to-frame fit which improves accuracy. This also allows for a lower bore axis which reduces muzzle flip. As a matter of personal opinion, I never really cared all too much about a pistol’s bore axis. I feel that a higher bore axis can simply be overcome with practice. Many do care about it however, and the CZ-75B is a good choice for these shooters. With a lower bore axis, the weight of the gun, and the fit of the slide-to-frame, CZ handguns certainly do have a reputation for superior accuracy.

Does performance on the range match the pistol’s appearance? Yes, but with limitations. One of the reasons why I prefer hammer fired pistols over striker fired is that hammer fired handguns tend to have better triggers. This CZ needs some time for the trigger to be broken in. It is a two stage trigger in single-action, with a bit of creep before the break. 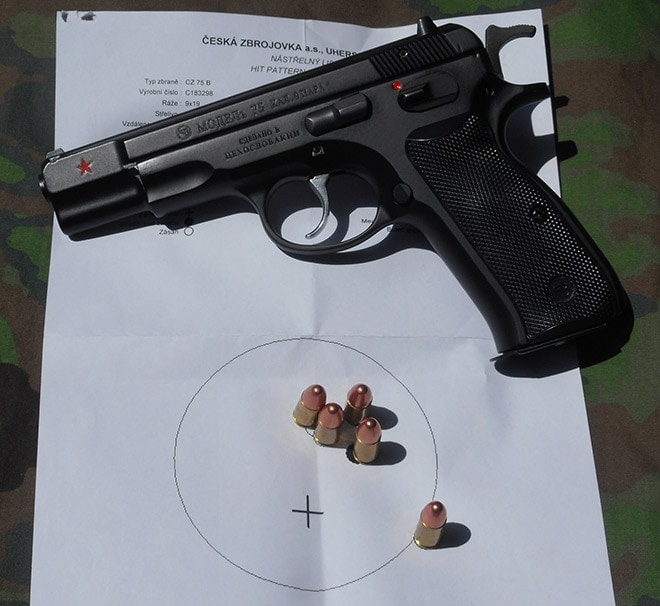 Another limitation is the slide which runs inside the frame. While it does help to provide better accuracy, it also provides less area to grasp the slide. Luckily the slide serrations are well cut and deliver just enough grip for a shooter to rack the slide, overhand or slingshot style. Sights are fixed and a simple three-dot affair. The dots are luminous, but they’re just glow-in-the-dark paint. 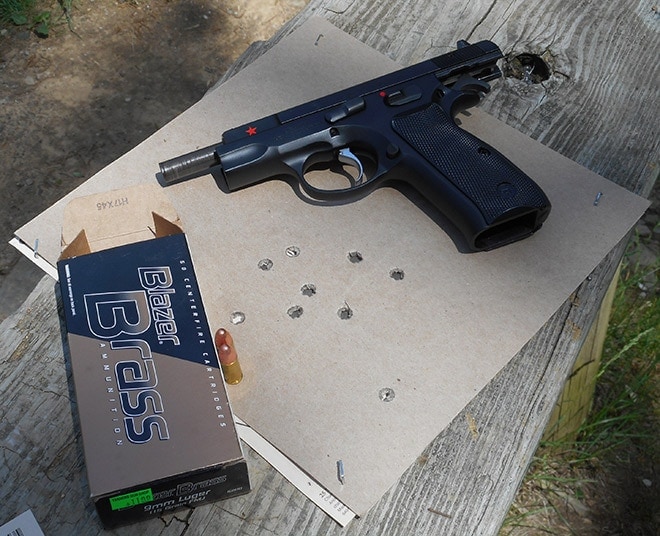 Some might still question why one should purchase a firearm clearly meant more for the hobby side rather than the practical side? Well, this firearm manages to straddle both sides quite nicely. One of the criticisms I levied upon the CZ P-01 was it’s sub-par accuracy. Inspecting the test target at the store, I was pleasantly surprised at the grouping. Disregarding the flyer, the group came in at just under an inch. With the lone flyer, the grouping pulled in at two inches — much more representative of what many of us have come to expect from CZ. 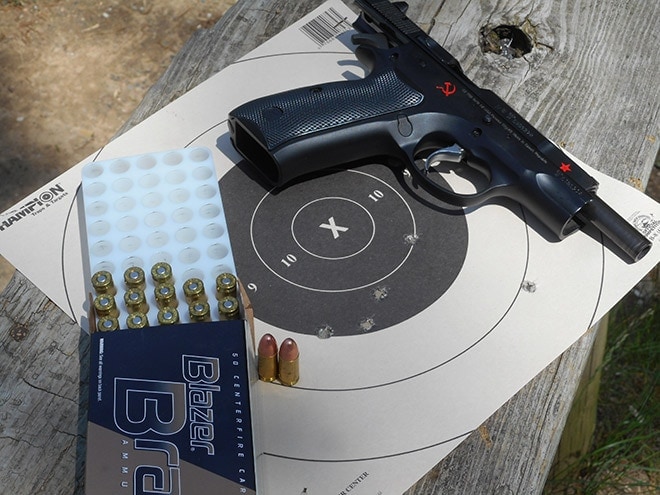 Not match standards, but good enough even with cheap ammo. (Photo: Francis Borek)

On the range, the test target was a good indicator of what to expect. With 115 grain Blazer Brass FMJs, the pistol grouped in around two inches. Federal 115 grain JHPs were a bit more disappointing, grouping at around four inches. However on the whole, this CZ-75B was far better on the range than the P-01. 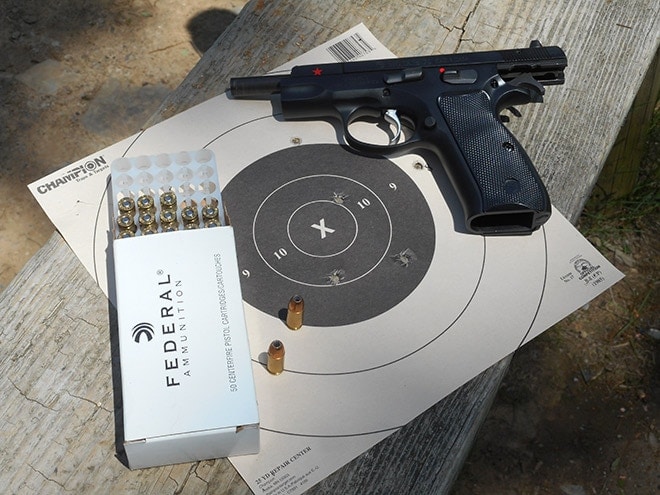 I know most shooters would be reluctant to pick up this gun due it’s commemorative nature and it’s higher price tag. Other shooters will avoid it due to it’s weight or lack of an accessory rail. Some uber-patriotic/conservative/libertarian shooters will shun it due to the communist symbols on the firearm. It is a big, heavy, tank of a handgun that shoots well and can double as a bludgeoning weapon when you run out of ammo. It brings with it a proven reputation for reliability and a 16 round capacity. This CZ-75B variant is well worth the price of admission, which in my case was $649 before taxes.