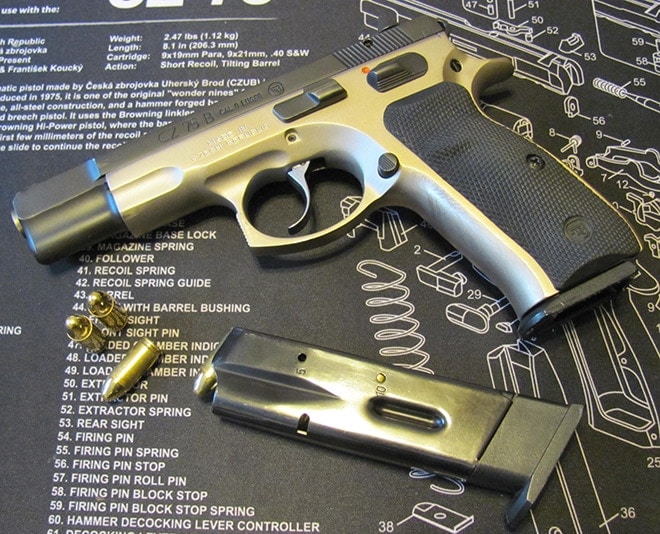 Things have come a long way since the magazine capacity of a Browning Hi-Power was impressive. The era of finding “wonder nine” -style handguns particularly wonderful is over. Even the improvement of a double/single action mechanism seems to be less in vogue than in years past. No huge strides in innovation anymore, rather continual small steps of refinement that leave us with a market saturated with high-quality, reliable, affordable pistols.

What this should tell you is that, inevitably, quality designs from a bygone era have proven themselves timeless. People still shoot trapdoor rifles for purposeful, practical and sentimental reasons.

Names, like Glock, ring out for a reason. And while it might be a little early to call the CZ-75 design ‘timeless’ (of all the guns of its generation) it may be the one that still sees the most popular use and iteration today.

In this review, I’ll be looking at the CZ-75B, a service version of the original CZ-75 still widely sold both to law enforcement, militaries, and civilians around the world.

The CZ-75 lineage is broad. It sprouts from the original model into a tree of service pistols, specialized racing pistols, and lots in-between. The 75B model is very close to the original with a firing block safety pin. This is an old-school, steel frame handgun, weighing in at 2.2 pounds, featuring a double-action/single-action mechanism, manual safety, and a couple of 16 round magazines. 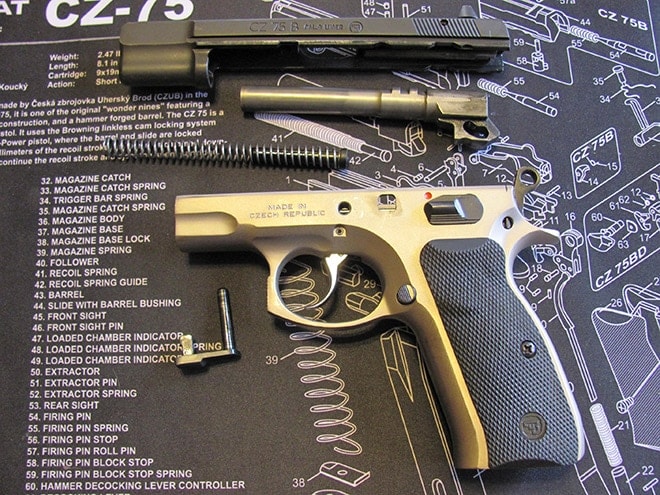 The 75B’s features are prototypical, at least externally: it uses a manual safety, external ring hammer, and has a 4.6 inch barrel. The magazines are steel with a plastic baseplate. The whole affair comes in a CZ plastic hard case with a cleaning brush, two magazines and a CD manual. Most are 9mm, but they’re available in 40 S&W as well. Retailing at $600, this is a mid-range service pistol with stiff competition in the striker-fired and DA/SA categories from established handguns.

Features-wise the CZ is unremarkable externally. The gun is solidly built without being fat or chunky, and the controls are similarly robust. When operated the safety provides good tactile feedback. The slide stop is easy to find with your thumb and the magazine release is large without being obtrusive. The gun’s sights are a simple, fixed, low-profile 3-dot affair with painted on green dots; upgrades like fiber optics are commonly available. The slide has some tasteful engraving and grip serrations. A pair of plastic grip panels are held on by a single screw. 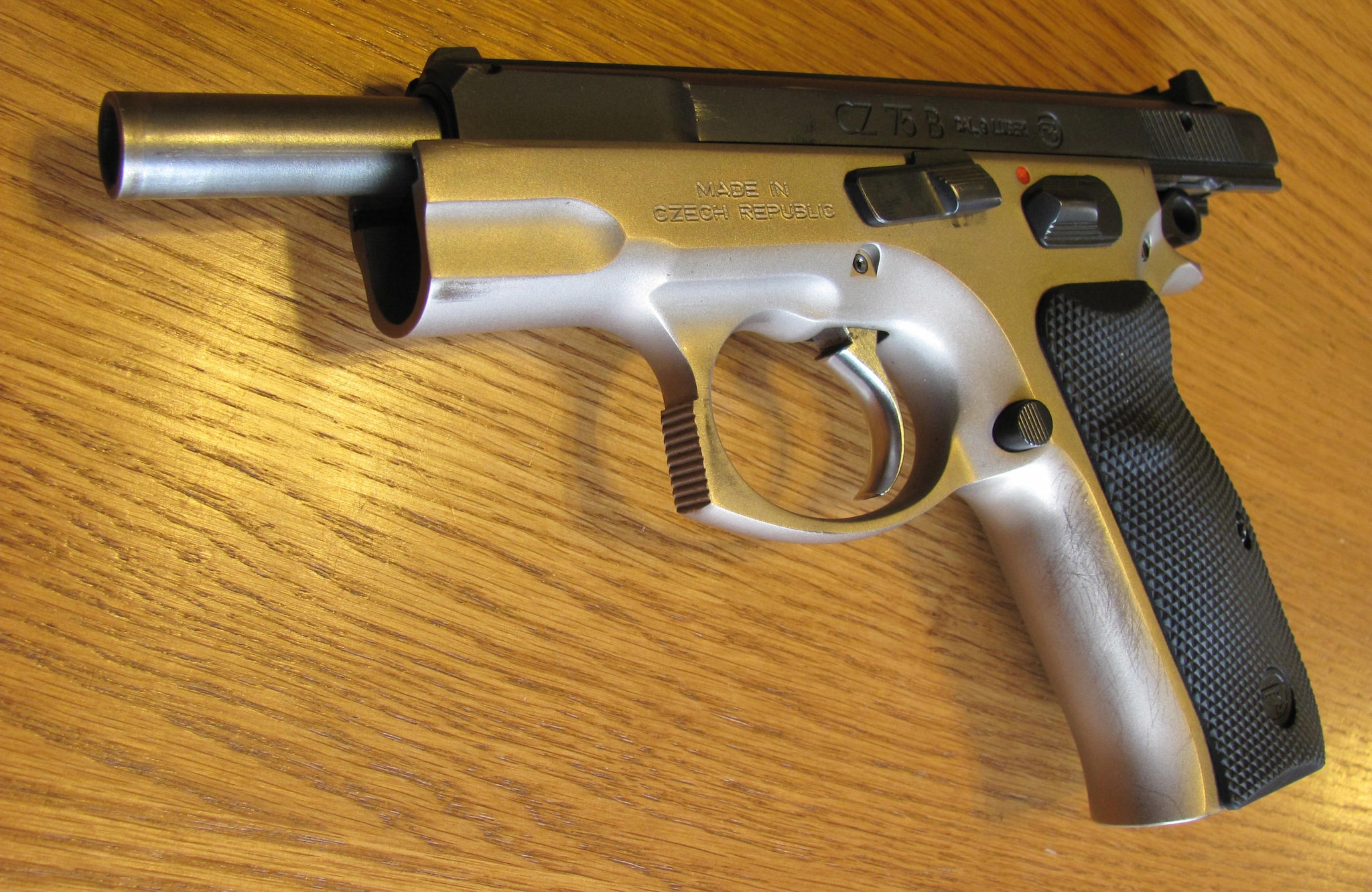 Taking apart the CZ is easy and maintenance is a snap. Even a full disassembly isn’t too difficult or frustrating, for those who like to get into the guts of their guns for a deep clean every now and then. It’s certainly not as simple as a Glock, but it’s nothing the average person can’t handle with a little patience and good internet connection. I’ll make obligatory note of the CZ’s internal slide rails that some people think gives the gun greater accuracy. I don’t see any real concrete evidence of this, but it sure looks nice.

With an eye for detail, looking over a CZ, you get an impression of quality workmanship. Even internally, tooling marks are minimal. It has much less of a utilitarian feel than some of its competitors, like the S&W M&P or Glock, while still feeling like a service pistol. 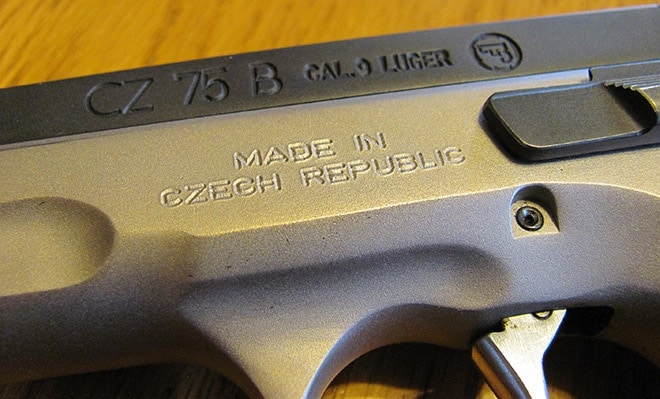 Aesthetically I think the CZ-75B is one of the best looking pistols ever made, but that’s obviously pure opinion. That said, I don’t think I’ve ever heard anybody express disdain for their appearance. Its profile is a bit subdued with rounded edges and a smooth overall profile. Its available in a huge variety of finishes, all of which are great in my experience; I went for a two-tone just to stand out a bit, and rest assured, it looked much nicer out of the box.

While the CZ might not have features that jump off the page, shooting it is very pleasurable. The weight combined with an accommodating shape for the hand makes shooting average 9mm loads a comfortable experience. Other models of the CZ-75 take this to the extreme like the new Shadow 2, where the forward weight and overall bulk of the gun make it almost a parody of service pistols. The CZ-75B isn’t a “competition tuned” gun like the Shadow, but it feels right. 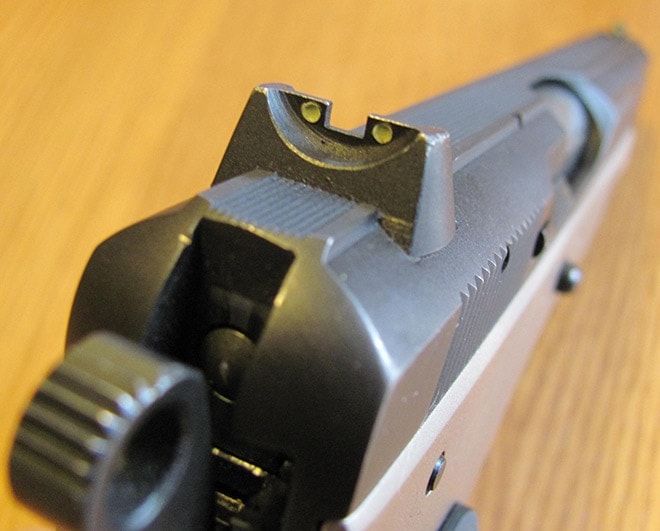 The very basic irons are functional but you can always source a replacement if you like something more elaborate. (Photo: Andy C)

The 75B’s trigger is mediocre. It can be tuned to greatness pretty economically with a combination of a visit to a competent gunsmith and commonly available upgrade parts. But out of the box, it’s unremarkable. The double-action pull is long and fairly heavy at around 12 pounds, but is relatively smooth. The single action trigger is light, around five pounds, but has lots of slack in the trigger. The reset is a bit mushy. This is a service handgun, so you can’t expect much more.

The sights are unexceptional, but I’ve never felt the urge to upgrade them for the type of shooting I use it for. I’ve never shot anything beyond 50 yards with it, and the vast majority of my targets are at 15 yards.

In terms of durability, this is a tough gun that works well in adverse conditions. I don’t make a point of abusing my firearms, but my CZ is my Service Conditions handgun, so it’s been through some unpleasantness, dirtiness, and probably been short on lubrication a few times. I’m hard pressed to think of times it’s failed me, and this is a gun that’s needed only routine springs replaced after upwards of 15,000 rounds. I’m impressed with the gun’s reliability and trust it absolutely. 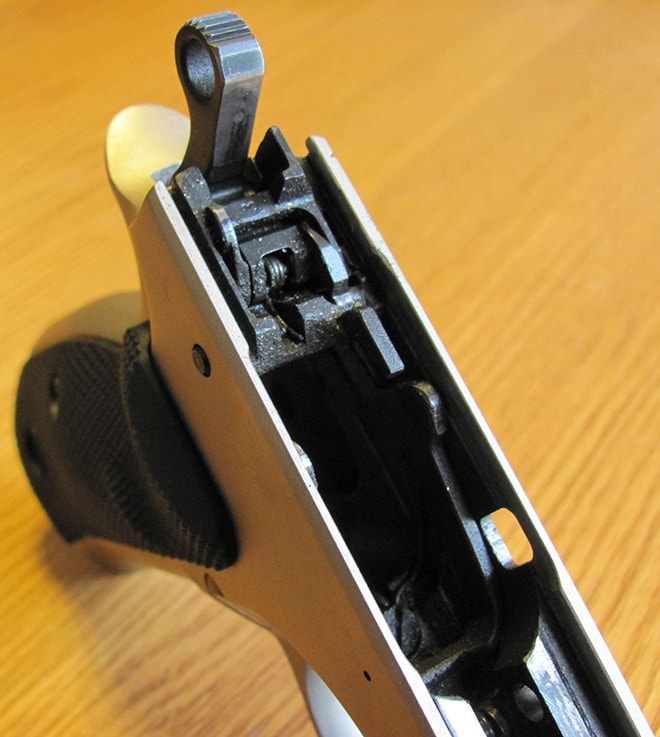 Despite the interior being dirty, it’s well put-together. It’s also really easy to clean with some q-tips and a toothpick. (Photo: Andy C)

In the realm of reliability, of course, any pistol is only as good as it’s magazines. Fortunately, CZ mags are some of the best, in my view. They’re easy to clean and mine are nowhere near wearing out. They’re also reasonably affordable, thanks to the gun’s long service life and continued popularity with competition shooters.

One black mark against the 75B, and CZ designs in general for me, is the low profile of the slide. Sure, it creates a lower overall gun and barrel axis, but it also means there’s less to grab onto. While I only use the slide release for reloads, in the event of an immediate action drill, it’s not nearly as easy to find purchase on the CZ’s slide as it is on an M&P. This isn’t a huge knock against the gun, but it’s worth noting. When you pick one up make sure you try racking the slide by hand a bit to get a feel for it.

Another small criticism I include in the interest of full disclosure is my grip panels are not factory — they’re replacement rubberized ones that CZ sells. I purchased these not because of discomfort with the originals, but because one of them broke. I’m 90% sure it was because I over-tightened the screw that holds them in place, but the stock grips did feel cheap by comparison. On the plus side, these grips are awesome — they give you an excellent purchase and don’t have a cheese grater effect on your hand. 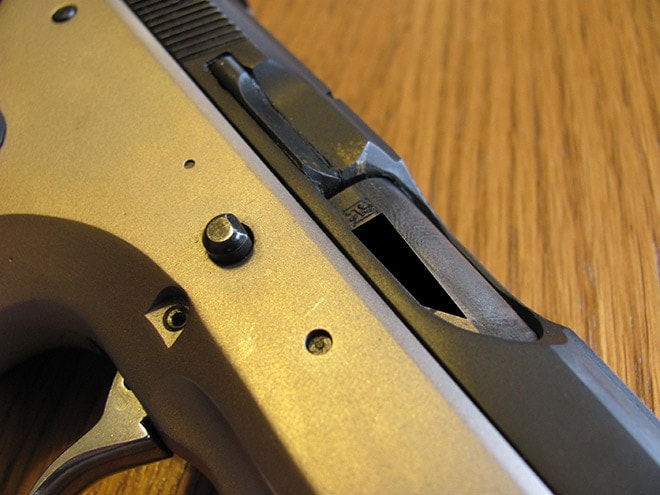 This is a gun that’s seen many thousands of rounds, so there’s a bit of wear around the ejection port, but it works as well as the day I got it. Also, it does not ship with the serial blacked out. (Photo: Andy C)

Overall, the CZ-75B gets a big thumbs-up from me. I’ve loved mine dearly, and it’s served me well across multiple pistol shooting disciplines as an all-around good gun. But it’s just one option in a sea of choices.

It’s clear this is an older design, lacking some of the modern bells and whistles that are considered practical, must-haves today like an accessory rail, interchangeable backstraps, and the like. This makes me hesitant to recommend the CZ-75B as a person’s first pistol. It’s not necessarily the best all-around option you can get for your money, especially the fact that it’s just the gun and two magazines.Other similar handguns like the Jericho 941 and the always popular M&P 9mm come with more magazines and range kits with holsters and such.

If you pick up a CZ-75B and fall in love, that’s a good reason to buy it. I doubt it will disappoint you in any way. But don’t shy away from other options, especially if it’s going to be an introduction to the handgun world.

This is a great gun that happens to exist in a world with many great guns of similar type and price. I can’t hold that against the CZ-75B. It has a bit of old school charm and definitely has old school reliability and performance. It’s a damn fine pistol that I’ve used to win matches, introduce people to shooting, and just had tons of fun with. If you get one for yourself, I’m sure you’ll have the same experience.