Serious competition trap shooters demand competition-grade shotgun sets. With one well-fitted firearm, they hope to dominate both singles and doubles trap.  While there are at least a dozen big names on the market producing fancy two-barrel sets, the majority carry a custom price tag from $5000-$25,000. For most, that’s outside the realm of both possibility but it’s also where CZ is carving a niche in the market with the All-American Trap, a more reasonably-priced, two-barrel competition trap combo for the discerning shooter. 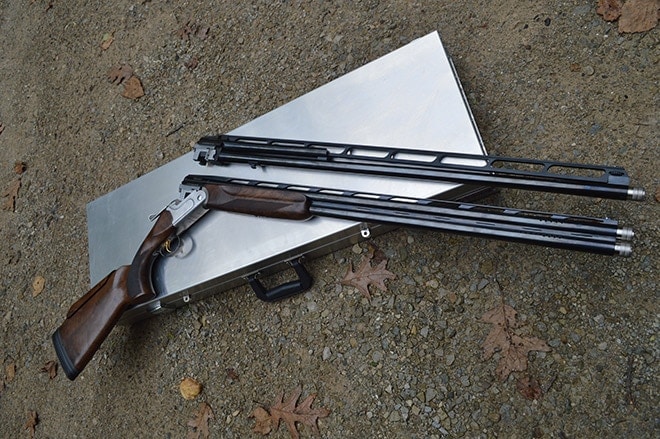 The All-American Combo comes out of the box ready to compete on the trap field with an unsingle—that is, bottom single barrel—and an over-under barrel set.  Both the unsingle and double-barrel set measure 32-inches with lengthened forcing cones and porting for recoil reduction. The gloss bluing on the barrels is dressy, yet CZ keeps things simple with a mechanical trigger and standard tang safety. Stocks are clean, high grade Turkish walnut with a Monte Carlo buttstock, all finished with Tru-Oil.  The comb is four-way adjustable, and the butt pad extends LOP from 14 5/8″ to 15 1/2″. A right-hand palm swell is meaty and fills the hand well.  The dovetail track trigger allows for 3/8″ of travel and the trigger is set for a friendly 3-3/4 pound pull.  White, Bradley-style front and center beads are easy to acquire. 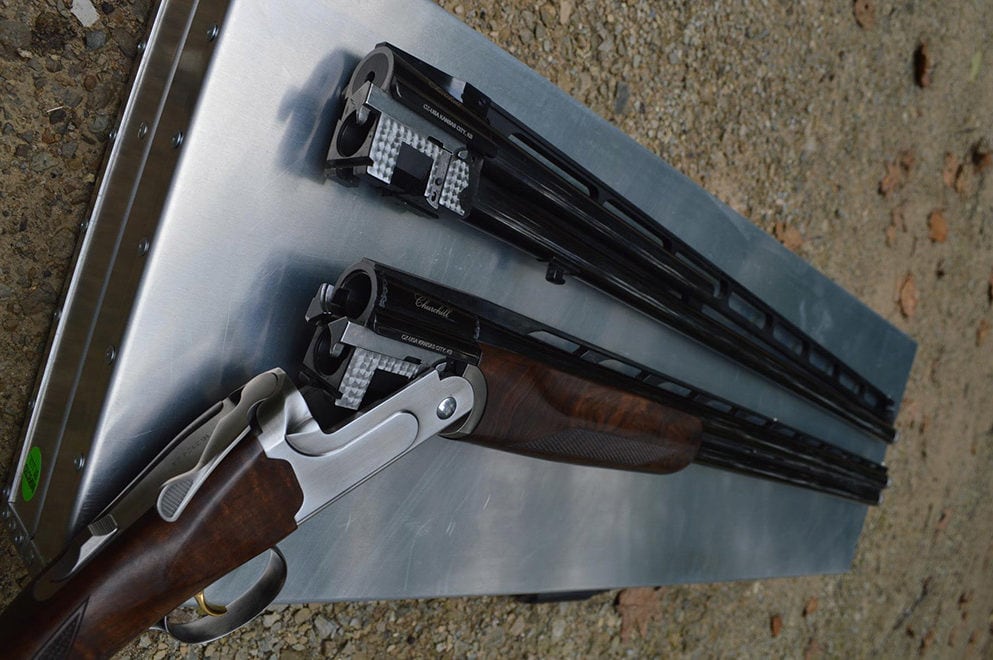 CZ All American trap combo comes with two barrels, one a single-shot ‘un-single’ with a dial-adjustable aluminum rib — from 50/50 up to 90/10 point of impact — the other a standard set of barrels with stepped rib — 50/50 point of impact. (Photo: Kristin Alberts) 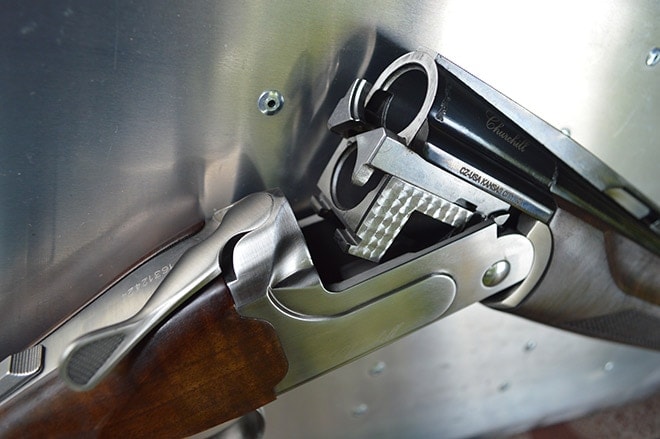 The CNC-milled action is surface hardened and polished to an “in-the-white” receiver finish resembling brushed stainless. Though there is no plating to fail or wear, we did have a tiny flaw in the metal at the base of our forend, which chipped out after several hundred rounds of shooting. We have no doubt that the stellar customer service at CZ-USA in Kansas City, KS will rectify the hiccup.  For reference, all CZ arms carry a one-year wooden parts and surface treatment warranty and five-year “other” parts guarantee. 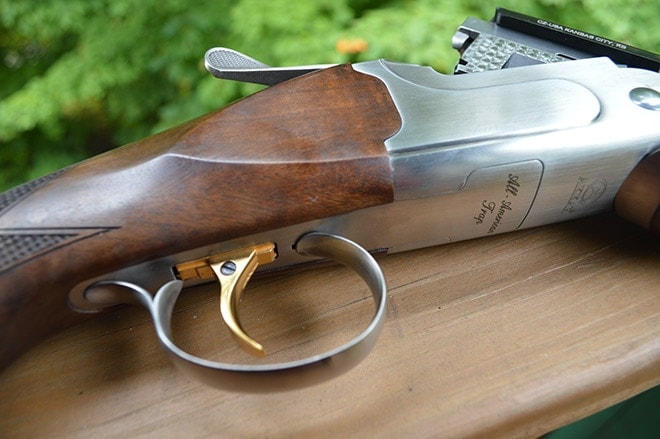 Under the hood, parts are built on par with competition guns in a higher price bracket.  Hinge pins are held in with set screws. Firing pins ride in bushings and all replacement are drop-in friendly, as these guns are usually shot for many tens of thousands of rounds.  Multiple sizes of locking blocks are available and hinge pins are replaceable, making it easier than usual to freshen the gun up after heavy use.  All of this comes at a cost, of course and MSRP on the combo is $3399. This may seem high to the casual shotgunner, but for the serious competitor, the All American Trap carries one of the more enticing price points. 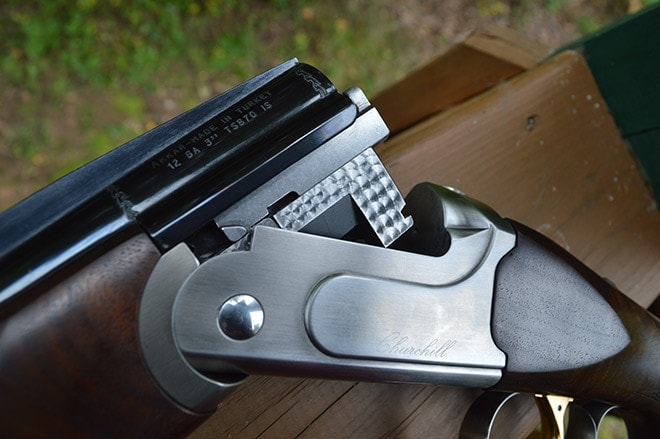 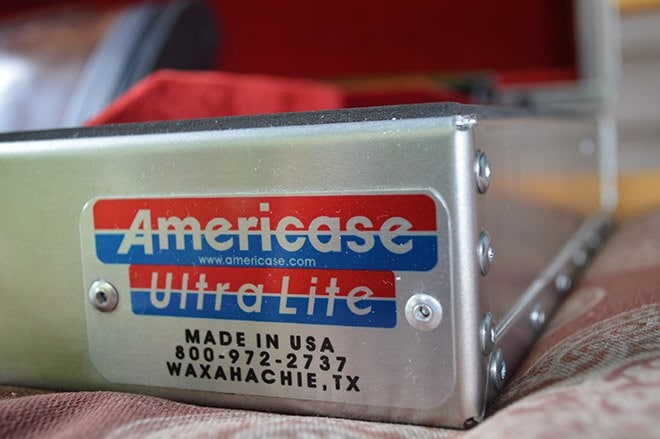 The included, custom-fit metal Americase ups the cool-factor big time, though it adds a significant amount of carrying weight.  Buyers have the option of choosing the color of the case’s fine lining. Ours came in burgundy and exuded class from the embroidered internal CZ logo to the locking airline grade hitches.

The purpose of the CZ All American 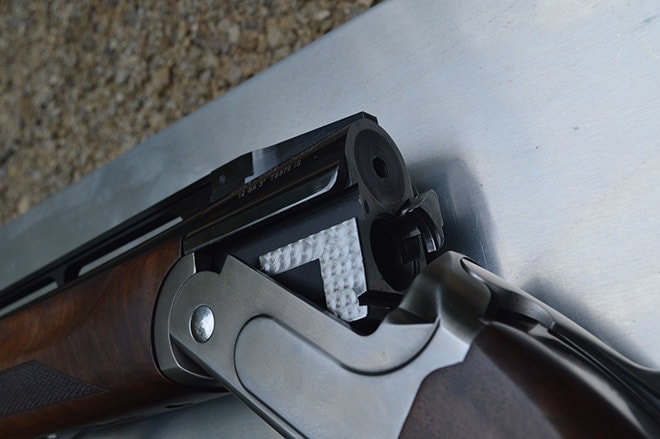 The CZ All American Trap Combo was built specifically for ATA shooters competing in both trap singles and doubles, and who want one gun to do it all.  The unsingle barrel is topped with a dial-adjustable aluminum rib adjustable from 100% high to 50/50 point of impact.  The double over-under set of barrels have a stepped rib and shoot to a 50/50 point of impact. 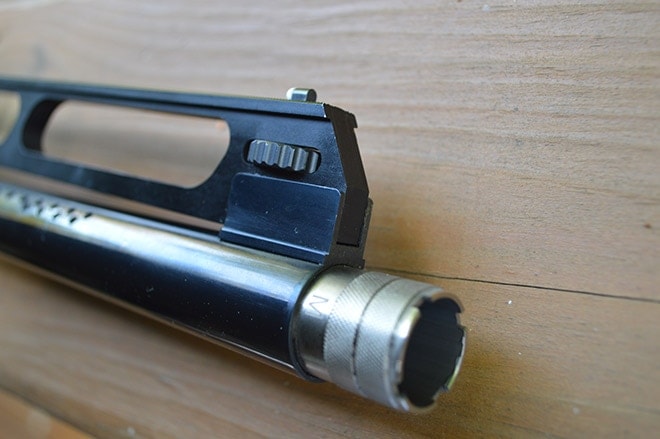 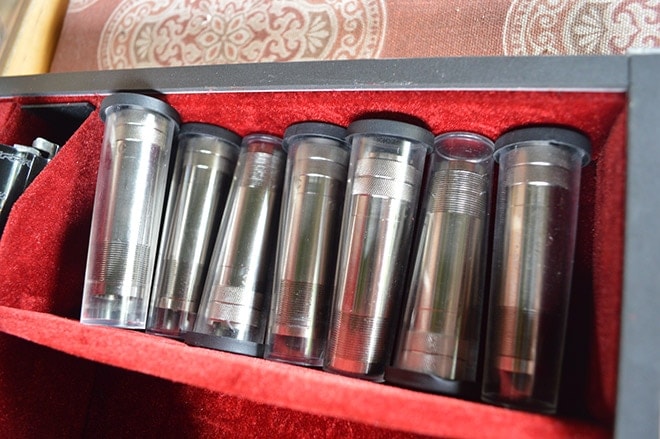 The All-American combo comes with an almost laughable but very appreciable 11 extended Rem-choke style tubes.  That breaks down to: two CYL, two IC, three Mod, three Full, and one Extra Full.  While we expected the inclusion of either Light or Improved Mods, making the chokes—from .700 to .735—versus the bore at .735, shows the company has covered the expected pattern ranges.  The included tubes are more than adequate for most competition shooters, especially at longer handicap ranges. 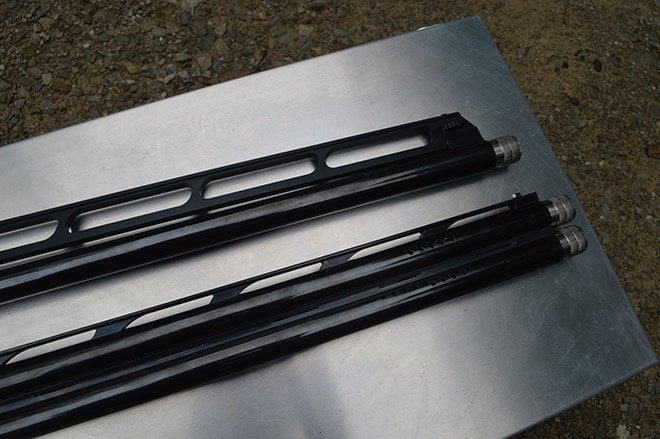 Differences between the ribs of the unsingle and double barrerls. (Photo: Kristin Alberts) 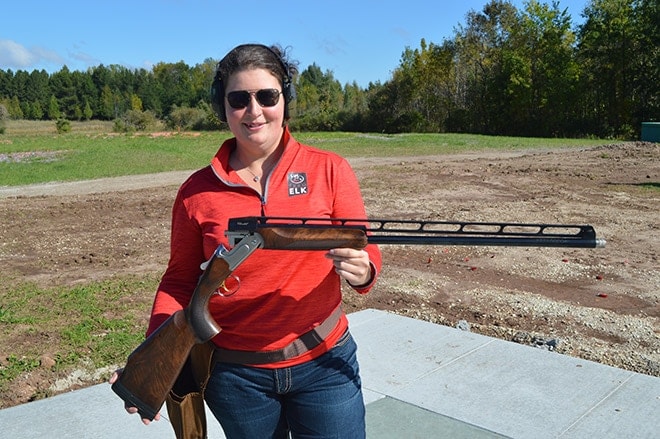 The double-row porting on both barrel sets pairs with the 8.5 pound overall weight of the gun to reduce felt recoil substantially.  Despite its weight, the gun is customizable, balanced, recoils little, and swings like a dream on angling birds. Firing standard 2-3/4-inch, 1-1/8 oz target loads is a pleasure on the trapline.  Unfortunately, the O/U barrels are not selectable, but rather, always fires the bottom barrel first, a choice decided by the unsingle’s bottom barrel. 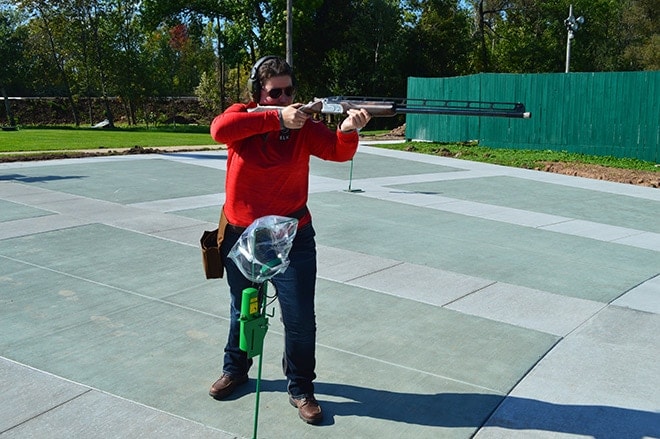 Busting clays all day with the CZ All American. (Photo: Kristin Alberts) 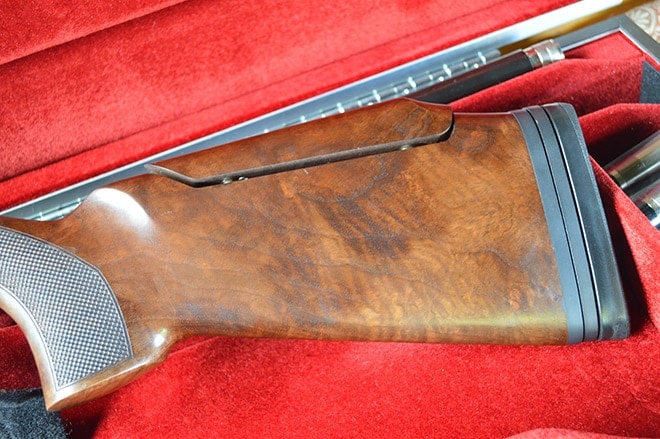 The All-American is easy to tune to individual shooters.  Before screaming over the cost of the combo, realize this is a competition set built to compete with ones that cost, on average, three times as much.  We pulled shooters who have competed in registered and ATA trap with Caesar Guerinis, Krieghoffs, and Ljutic and all were able to fit the CZ to themselves in short order and hit well.  In fact, after adjusting the gun to myself, with the comb slightly raised, buttstock fully collapsed, trigger moved rearward, and unsingle rib dialed in, I was able to hit 49/50, a personal best. 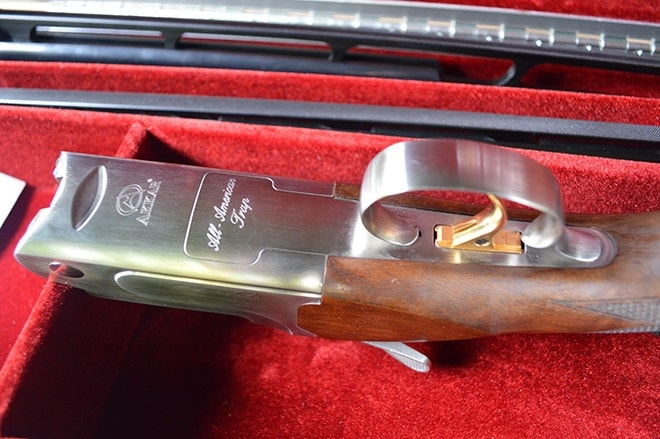 Underside of the receiver gives the name All American, but is labeled Akkar, Turkey. (Photo: Kristin Alberts)

Ejectors are standard on the All-American Trap which is to be expected, but the gun was so tight and well-fitted out of the box, we needed two hands to break the action, which meant the hulls went flying. That’s a good problem to have, however, and the gun will break in well over time.  We all wondered, however, how a Turkish-made, Churchill-branded shotgun came to be named the “All-American,” other than the fact it was purpose-built for American trap competitors. 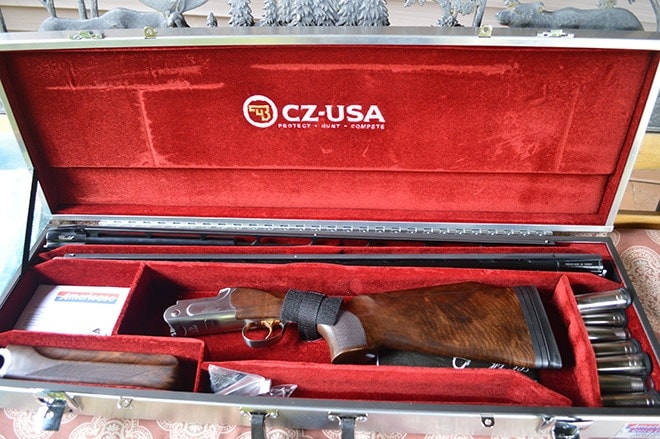 CZ All American in the case. (Photo: Kristin Alberts) 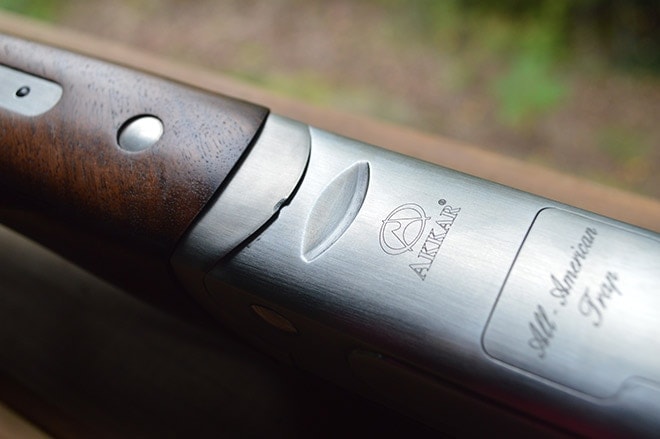 What came to us as a flaw on the forearm’s metal, had “fallen out” by the end of testing. (Photo: Kristin Alberts)

The CZ All-American Trap Combo is a specific purpose-driven trap shotgun for the more competitive shooters.  The Turkish-meets-English-meets-American gun is not only fully customizable, but parts are easily replaceable for high-volume shooters.  For those considering a serious shotgun that excels at trap and can also play well on the sporting clays course, it will be near-impossible to find another set with as many fit options and features for anywhere near the price.