In a time where the name of the game in rifle manufacture is more options and more calibers, CZ does just the opposite with their Ultimate Hunting Rifle (UHR).  The CZ UHR comes in just one model and the sole chambering is .300 Win Mag.  Naming something the “Ultimate Hunting Rifle” is a pretty big claim, so does the rifle stand up to its moniker?  Guns.com finds out.

What is the Ultimate Hunting Rifle?

The UHR is a CZ 550-based rifle chambered in .300 Winchester Magnum.  Like other 550s, the UHR is built on CZ’s rugged Mauser action.  The rifle weighs in at 8.5 pounds empty, and get this, includes a minute of angle accuracy guarantee to 600 yards.  That’s right — a 600-yard MOA guarantee out of the box, from a production hunting rifle. As CZ says, “the only variables left in the system are the optics, ammo, and ability of the hunter.”  And to further negate any potential issues with optics mounting, the company includes a quality one-piece optics mounting system with each rifle. 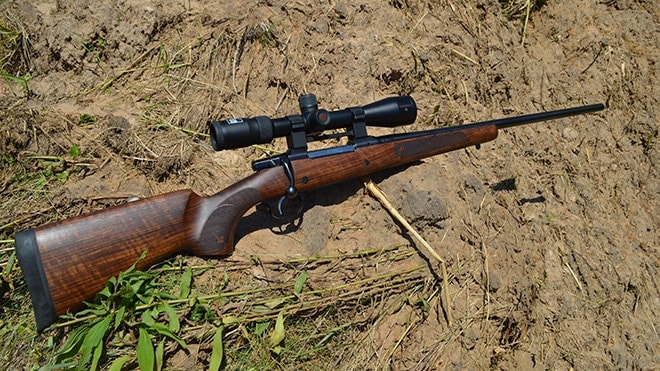 The down and dirty UHR in .300 Win Mag. A $1361 MSRP may seem steep for a production rifle, but not when you consider the guarantee of one MOA at 600 yards. (Photo: Kristin Alberts)

What drives the accuracy?  The 24 inch cold hammer forged, heavy sporter barrel is finished with 1:10 inch twist rifling, ideal for a wide range of bullet weights. There’s a hinged floorplate for quick unloading and a two position push-to-fire safety is at the ready for right-handers.  Length of pull (LOP) is a standard 13.75 inches with a rubber buttpad.  A fully adjustable, single set trigger sets the tone for the accuracy guarantee. 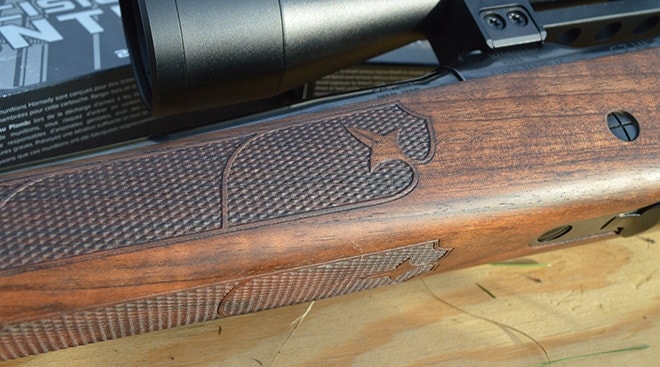 Furniture is Turkish walnut done, as CZ calls, it in “American style” with an oiled finish and fine checkering.  Whatever the company has done in stocking the rifle, not only is it well finished and smooth, but it is uncommonly comfortable against the cheek and negates recoil as well as or better than the long list of other .300 chambering rifles we’ve shot over the years. 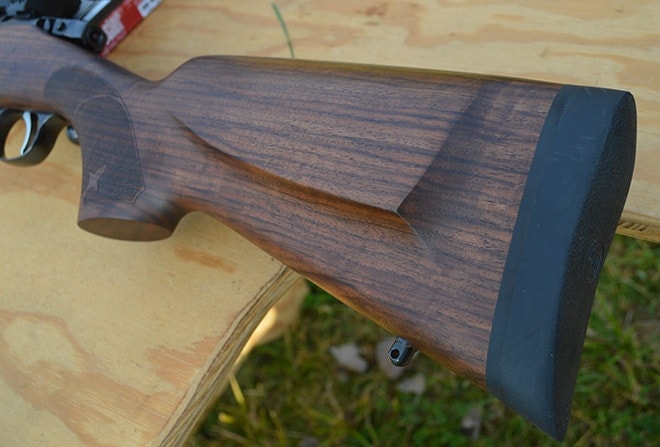 The “American style” Turkish walnut stock with an oiled finish is quite handsome and the cheek weld accommodating. (Photo: Kristin Alberts)

Sling swivels come standard and are nice for the mobile hunter, because this is a gun built to hunt.  The UHR is a stellar compromise between the accuracy of a bench rifle and a stalking rifle — heavy enough to minimize recoil yet not too heavy to carry on a hunt.  MSRP may sound steep at $1361, but this is a custom grade rifle built to do it all in a production gun.

A big plus is the fact the UHR includes a one-piece solid base and optic mount, which comes with 30mm rings for the larger-tubed scopes preferred by long-range shooters.  We opted to mount a Nikon Pro Staff 7 in 4-16×42 for our accuracy testing and hunting, as this scope has performed admirably in the past. 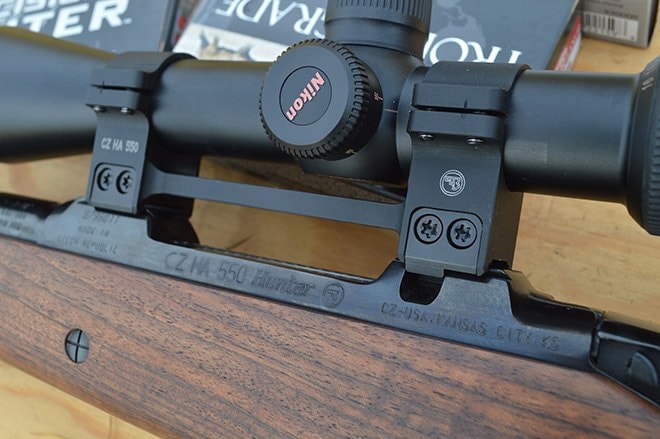 Per the company, “development of the rifle was done with DRT 200 gr. jacketed frangible rounds, and 165/168 gr. Hornady SST and Interlock bullets are a favorite as well.”  But we wanted to test the gamut.  While sighting in on the range, we fired multiple varieties of premium ammunition: Hornady Superformance 180 grain SST, Hornady Precision Hunter 200 grain ELD-X, Federal Fusion 150 grain SP, Winchester Deer Season 150 grain Extreme Point, and Nosler 190 grain ABLR.  As expected, the rifle fired each with 100 percent reliability and all within MOA accuracy.

Collection of test ammunition representing both manufacturer’s recommendations and some of our own. (Photo: Kristin Alberts)

Our range, unfortunately, only allowed testing to 500 yards, but that was far enough to back-up CZ’s accuracy claims.  This rifle will shoot better than most of the folks behind the scope.  The Deer Season ammo is the only one that did not maintain MOA past 250 yards, but was still minute of vitals at 500.  The others were very capable of one MOA at 500 yards from a solid rest with a practiced shooter.  Both the Nosler Accubond Long Range and Precision Hunter ammo provided the tightest groups at the longest ranges.  The best 100-300 yard groups came with Hornady SST.  Though the company advised 168 grains as ideal, the 190s we tested hit superbly. 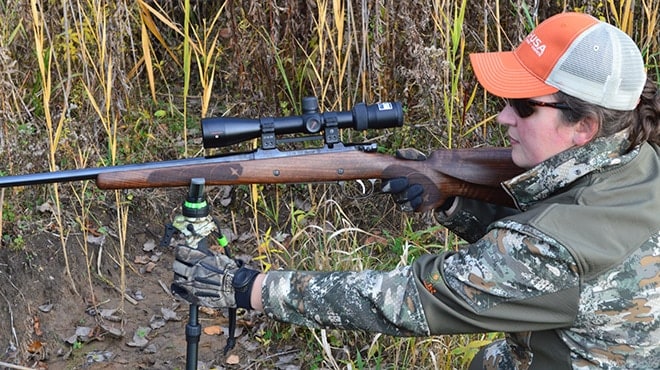 The UHR strikes a balance between a heavy bench rifle and a lighter hunting rifle. The use of a lightweight bipod in the field really brings out both of these elements. (Photo: Kristin Alberts)

We had the pleasure of taking the UHR on a November 2016 whitetail deer hunt, and not only did the gun live up to it’s model name, it earned a new one: the Eliminator.  Due to the beanfield nature of our hunt, we opted to shoot Nosler’s 190 grain Accubond Long Range ammunition, which was slightly overkill for the size of the game but performed admirably at the 300+ yard ranges we anticipated for the hunt. It killed cleanly in all cases, including one inside of 150 yards and one nearly 400. 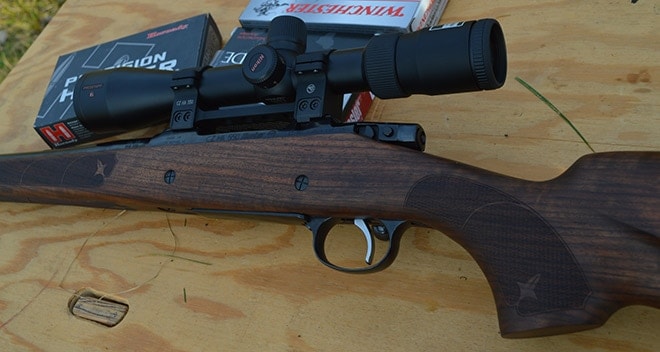 CZ’s set trigger is easy to adapt to and allows for precision shooting at long distances. (Photo: Kristin Alberts)

Over the course of nine days and three shooters, the UHR claimed 3 whitetail buck and one large doe. One shot, one clean kill each time.  That was four shots, four deer, and a new hunting rifle that everyone wanted to claim as their own.  The only complaint?  Our left-handed range buddy complained for hours on end that CZ does not make a southpaw friendly UHR.  Everything else was spot on.  The satiny oil-rubbed look of the wood was stellar, the quality of the wood above average, a smooth bolt action, and ultra crisp set trigger. 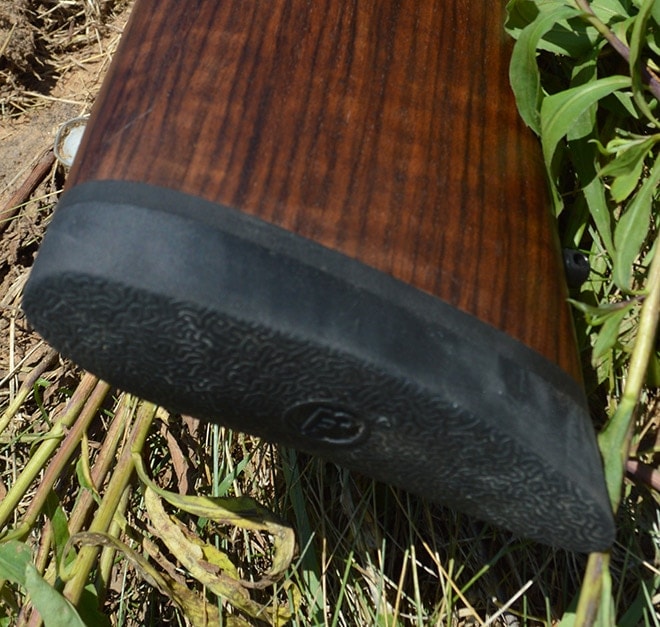 In fact, the trigger was one of our favorite parts.  Set triggers are not terribly common on American guns, but CZ has been gaining popularity because of them, particularly the SST set trigger found on their 550 series of rifles. The SST allows for both a standard hunting trigger and a light target trigger in the same rifle.  In this case, the gun can be fired traditionally without setting the trigger, and it breaks just a hair over four pounds.  Setting the trigger is done by pushing forward slightly, whence an audible click is both heard and felt.  The trigger, now ideal for target accuracy and long range shooting, broke at one pound 11 ounces out of the box.  Just when you think things can’t get any sweeter, both trigger pulls are fully adjustable. 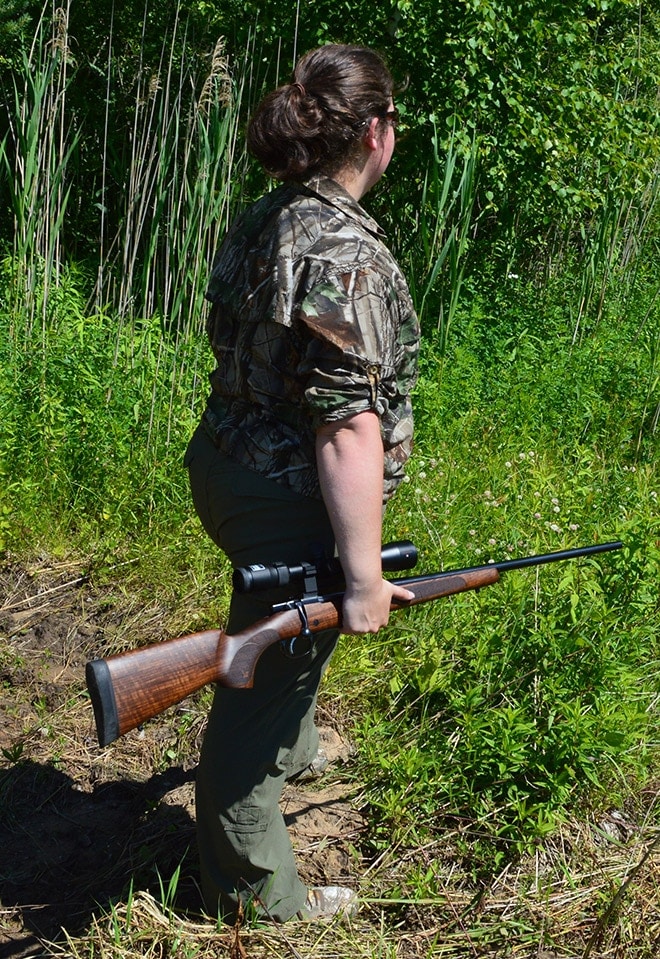 The UHR comes equipped with sling mounts, though I found the approximately 9 pound loaded rifle to be easy to carry in the field. (Photo: Kristin Alberts)

While we’d love to see a lifetime warranty on this rifle, CZ does warrant their firearms for five years to the original purchaser.  Though Ceska Zbrojovka is a Czech Republic company in business since 1936, CZ-USA’s headquarters are in Kansas City, KS.  We had to return the gun once due to damage in the shipping process, and it was repaired and returned within two weeks door-to-door.

I applaud their choice of chambering.  Hunters and shooters may argue until time immemorial about which caliber is best, but one thing remains clear: the .300 Win Mag can take any big game in North America, and in fact, most species of large game the world over.  Indeed, the UHR is a favorite plains game rifle in Africa. 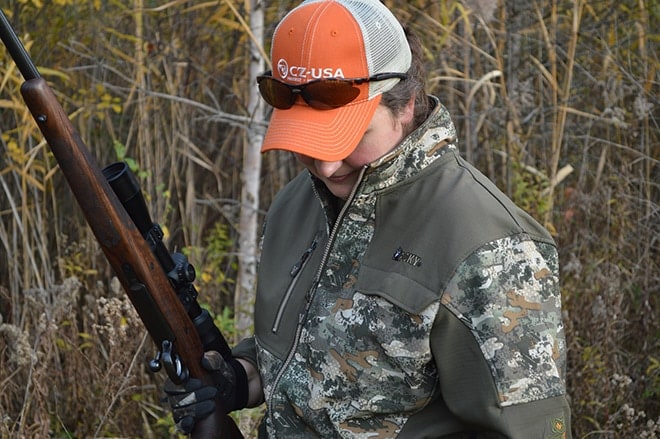 After four shots and four deer taken, my hunting group was fighting over who would take home CZ’s UHR. (Photo: Kristin Alberts)

Though it’s not new, for some reason the CZ UHR has still not gotten its due and the fact remains that this rifle lives up to its name.  The UHR has been designed and built by hunters for hunters, and over the course of a few short years has claimed game across most every continent on this earth.  Some will say the price is steep, but check out the cost for another rifle that guarantees MOA at 600 yards, is built to hunt, includes the scope mount, and is chambered for most any big game desired. There’s a place in my safe for this rifle, and I think I can hear it begging to go another hunting trip.