When’s the last time you bought a 22LR rimfire that, like a transformer, could quickly morph into both a 17HMR or 22 WMR? How about a rifle that drops into both a short youth stock or high-end precision adult furniture?  Never, that’s when.  But that’s exactly what CZ offers in their new 455 Scout. 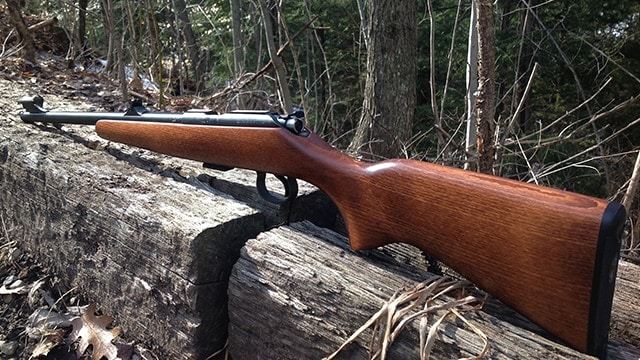 The CZ Scout 455 as it comes out of the box from the factory. Ideal size for youth shooters, but enjoyed by the kids at heart with its threaded barrel and adjustable trigger. (Photo: Kristin Alberts/Guns.com)

Fans of CZ will instantly recognize the 455 line as one of quality and myriad options.  Rimfire shooters will likely remember an earlier iteration of the Scout, as CZ catalogued a model 452 Scout.  That version, however, was discontinued a while back and until now, had not been replaced.  Apparently, the company was working their magic in the design room, and here we are watching the new-and-much-improved 455 Scout enter the market with little media fanfare.

By retooling the Scout into the company’s 455 line of rifles, adding any of the company’s full-size stocks is drop-in easy.  CZ’s entire 455 platform is modular, which means users can swap not only stocks, but also barrels and chamberings.  That means the Scout, which ships as a 22LR, can be quickly converted to either 17HMR or 22WMR with purchase of another barrel.

The base model 455 Scout bolt-action rimfire rifle is built for and marketed as the ideal buy for young shooters. That is at once a boon and a disservice.  With a 12” length of pull and simple iron sights, the Scout indeed makes a marvelous first gun.  To limit the market to growing youngsters, however, is less than ideal, as the Scout works well for both small-framed shooters and hunters desiring an ultra-maneuverable varminter. 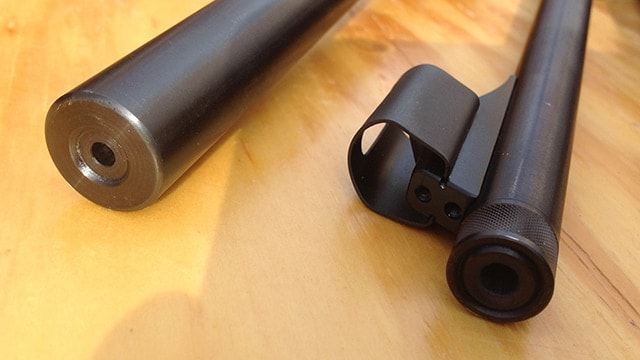 At left, muzzle detail on the 17HMR heavy barrel, and at right, the factory .22LR barel which comes threaded and capped. Several .22 WMR barrels are also available from the CZ Webstore. (Photo: Kristin Alberts/Guns.com) 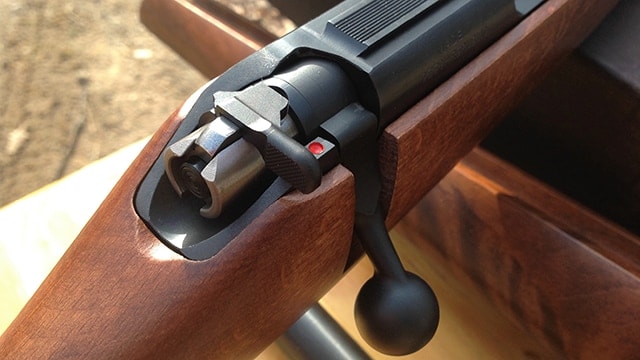 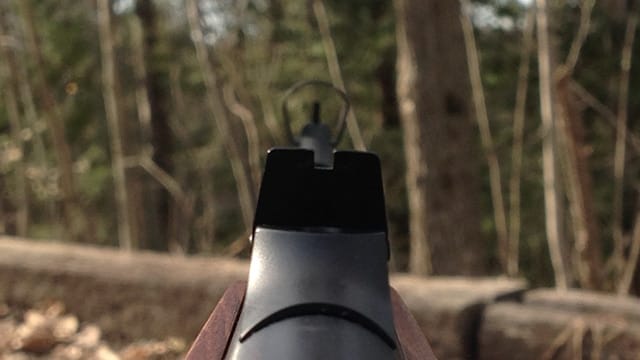 Iron sights on the Scout’s .22LR barrel are oversized and quick to acquire. (Photo: Kristin Alberts/Guns.com)

Overall build quality is solid.  The leaf rear sight is windage adjustable while the hooded blade front can be set for elevation adjustments.  In addition, 11mm dovetails on the receiver make scope mounting simple.  To help promote both safety and ammo conservation, the .22LR rifle is shipped with a single-shot adapter that limits the gun to single-round feed.  We would’ve definitely liked to see the gun ship with a regular-capacity magazine, though CZ offers numerous mags from five to 25 rounds through their webstore.

The best part of the whole deal is the price, with MSRP on the Scout rimfire set at $339.  Extra barrels are available in various lengths and weights in the $139-159 range, and each ships with its own magazine.  Meanwhile, the company offers everything from plain hardwood to mannlicher to Manners Precision stocks, selling for $120-300 in the webstore as well. (https://shop.cz-usa.com/cz-products/rifles/stocks/rimfire)  Those who love the concept but are seeking a straight-up adult combo can also find CZ’s 455 American 22LR/17HMR combo priced at $421.

Weighing in at five pounds empty with the factory 16.5” cold hammer forged barrel, the Scout is one of the most comfortable and well-built small guns on the market. An adjustable trigger is icing on the cake.  And in one of the coolest moves we’ve seen on a “youth gun,” the Scout comes threaded at 1/2×28 for a suppressor or other muzzle device attachment. Factor in the exceptional CZ trigger, and you know this rifle is not just for kids, but for the kid inside us all.

Transformers on the Range 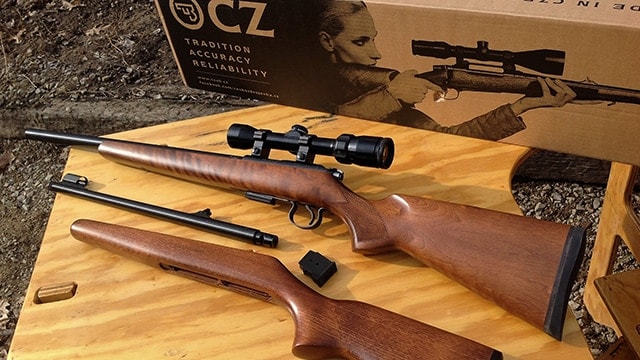 For test purposes, we picked up a 17HMR barrel and full length stock to go with the factory 455 Scout, which ships as a 16.5” barreled 22LR and 12” LOP beechwood stock. (Photo: Kristin Alberts/Guns.com)

For T&E purposes, we picked up the base 455 Scout in addition to a 17HMR heavy barrel and a standard full-length stock.  The factory short stock is made of beechwood, more cost effective and somewhat softer than traditional walnut, but the finish is smooth and attractive.  Our additional 17HMR barrel is of the varmint variety, measuring 20” long, and sans sights.  Our sample adult stock is made of Turkish walnut, with a standard 14.25” LOP and retails for $125.

Accuracy testing with the rifle in its various configurations was a treat.  Barrels are swapped by loosening the forward magazine well bolt 1-2 turns and backing out the two angled barrel retaining allen screws with the provided wrench.  The instruction manual is clear and easy to follow, and the recommended torque is provided for both barrels and stocks.  The 22LR magazine requires use of a mag well spacer blocks which is held in place with a single pin.  This is quickly removed when you have the gun out of the stock to swap barrels. 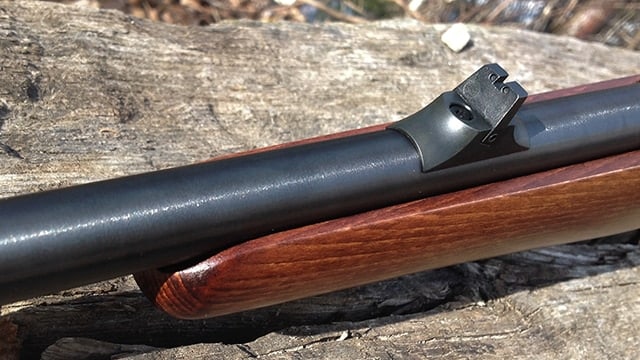 The factory barrel is free-floated in the stock channel, and the same is true of the 17HMR heavy barrel and walnut full-length stock. (Photo: Kristin Alberts/Guns.com) 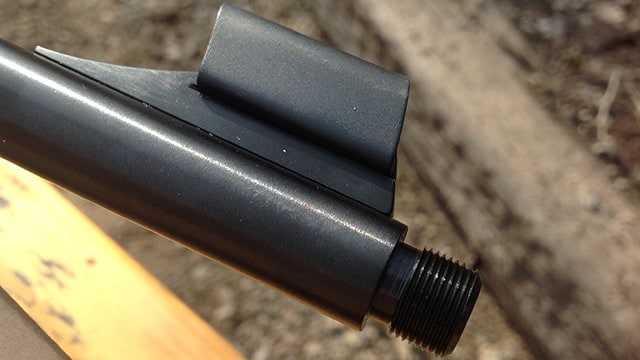 The hooded front sight lends the gun a unique look, while the threaded factory .22LR barrel is a welcome find on a gun marketed to youth shooters. (Photo: Kristin Alberts/Guns.com) 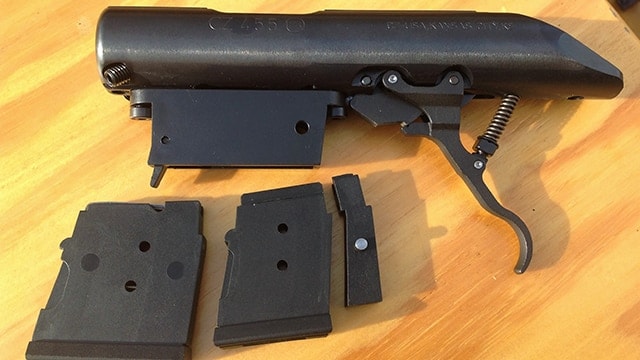 A view of the receiver with barrel removed shows the magazine well, which accepts .22LR, .22WMR, and .17HMR mags. The spacer shown with the LR mag installs quickly with a single cross pin and allows this system to work. (Photo: Kristin Alberts/Guns.com)

The bolt action is not that of a custom rifle but is smooth and accurate enough to hold its own in most any casual range competition or rimfire hunting scenario. As we’d expect with any bolt action, all ammo cycled flawlessly, all while using the same bolt and internals for both 22LR and 17HMR.

We did some accuracy testing from the bench with both the 22LR and 17HMR, scoped and unscoped.  In spite of the shorter barrel lengths, both shot admirably, no doubt aided by the excellent trigger quality.  The 22LR easily cut hole on hole at 50 yards, while the 17HMR did the same at 100 yards out.  The only knock we could find on the gun is also one of its major benefits.  The factory trigger breaks crisp and clean just a hair under three pounds, which no doubt aids greatly in accurate shooting.  We were able to adjust the trigger down to two pounds, but not much heavier pull than 3.2lbs, which is on the light side for a gun marketed to youth, though there is no replacement for teaching proper and safe handling and shooting.  The threaded barrel allowing suppressor use is ideal for young shooters, who often shy away more from the noise than anything else.

The CZ 455 Scout has mass appeal in its versatility, yet has hardly garnered mention in its 2017 debut.  Buy it for the youngster in your life and the Scout becomes a lifetime gun with stocks, barrels, and calibers that grow with them.  Pick it up as an adult and build yourself a combo that can be suppressed or quickly fitted with a heavy barrel and varmint stock for long range accuracy.  The bottom line is, no matter your taste, shooting style, or quarry, the CZ 455 Scout has you covered.  For the cost of one higher dollar rimfire rifle, you can own a rimfire with three calibers, a couple stocks, and an exceptional trigger. 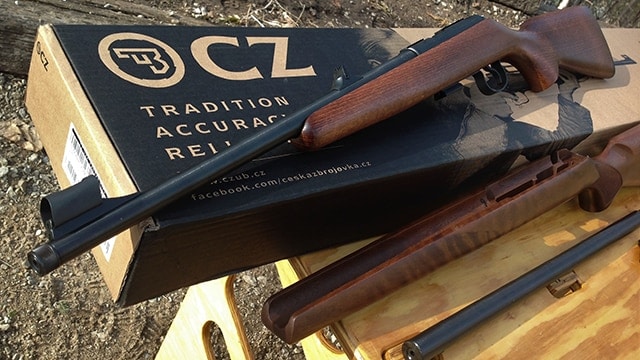 The factory CZ 455 Scout, with its 16.5” .22LR barrel and 12” LOP stock, alongside additional barrel and stock. (Photo: Kristin Alberts/Guns.com)

The modular CZ 455 Scout rimfire rifle is a win-win-win.  It grows with a youth shooter for a lifetime and at once appeals to the kid at heart as well.  With simple-to-swap barrels, calibers, stocks, and accessories galore, the Scout comes with every hot rimfire feature and a price tag hard to beat.