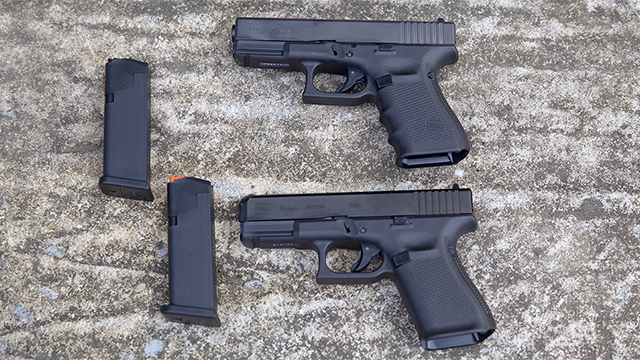 In addition to offering a flared magwell, the Gen 5 magazine, bottom, offer an orange follower instead of the black Gen 4 style, top. (Photo: Jacki Billings/Guns.com)

Glock announced its Gen 5 series in Fall 2017, much to the delight of Glock fans everywhere. Adding a new lineup to its already popular series of polymer pistols, the Gen 5 kicked the aesthetics up a notch with a few tweaks. Though I have reviewed both the Gen 4 and Gen 5 Glock G19 on separate occasions, I have yet to round up our thoughts on the platforms in one space – that is, until now.

Taking two of Gaston’s greats, I stacked the Glock 19 Gen 4 up against its newer Glock 19 Gen 5 sibling to see which one comes out on top.

While the Glock series will never win awards for its looks, the Gen 5 G19 does offer some aesthetical upgrades to the overall look and feel of the Glock 19 platform. The 9mm chambered Gen 5 originates from the M series pistol created to serve federal law enforcement. As hands tend to vary widely, Glock revamped its grip and ditched the finger grooves that appear on the Gen 4 platform. Despite some Glock fans objection to the removal of the finger grooves, the move was an intelligent one. Any shooter with smaller hands knows the uncomfortable nature that is the Gen 4 grooves. Their disappearance opened the Glock platform up to a wider audience of shooter who may have shied away based on hand fit alone.

Though the Gen 5 ditches the grip grooves, the Gen 5 adds a little more width to its overall size. Measuring 1.34-inches, in comparison to the Gen. 4’s 1.18-inches, the Gen. 5 doesn’t really feel any bigger than its predecessor. Length wise the two generations are exactly the same, measuring in at 7.28-inches. 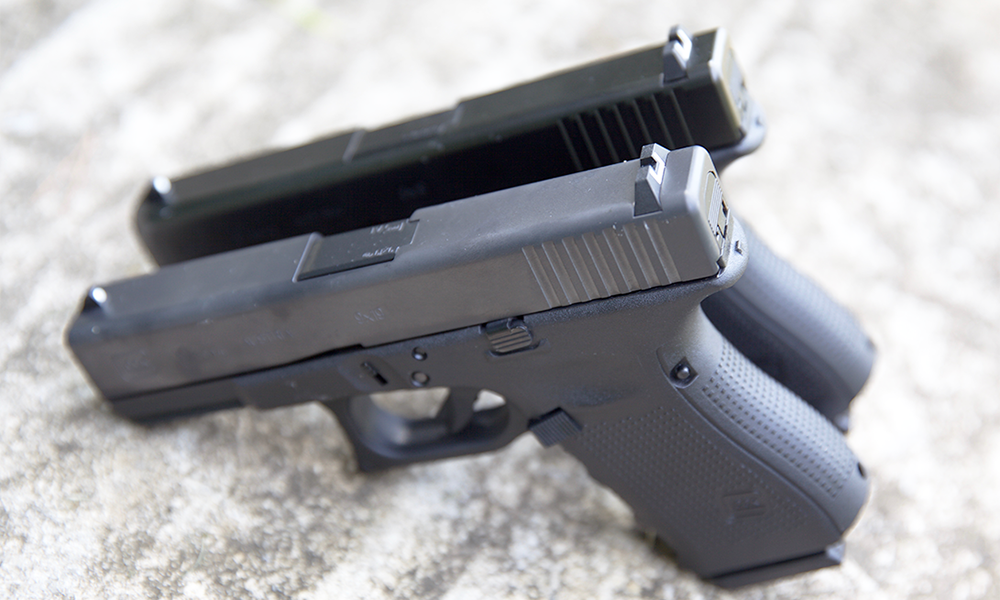 The Gen 4 and 5 stand at the same height. (Photo: Jacki Billings/Guns.com) 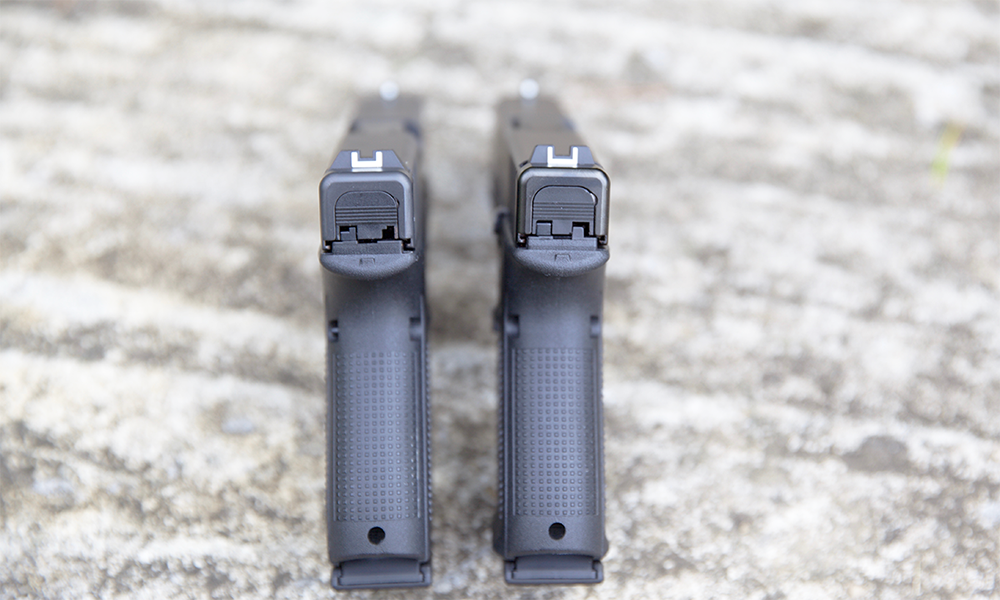 Not available in the Gen 4 Glocks, the Gen 5 offers left-handed shooters an ambidextrous slide stop. I am no lefty, so this addition to the Glock didn’t equate much to me; but from what I hear from left handed friends of mine it’s welcomed and makes manipulation of the gun a tad easier.

Overall, the Gen 5 employs a more rounded design. In what we suspect is to create a lower profile for concealed carry, the rounded nose on the Gen 5 G19 somehow makes the pistol look nicer while also preventing any snagging on the draw. Does this really mean much in the grand scheme of concealment? Not that I could find. The Gen 4 conceals just as well as the Gen 5 and draws just as easy from both a StealthGear USA and Dark Star Gear holster.

Topping off the G19’s look in the Gen 5 is the addition of the nDLC finish. Out of the box the nDLC, a supposedly tougher and more durable coating, looks sleek; but when it easily showcases any oil, dirt, grime or fingerprints. I found myself continually wiping the Gen 5 down, whereas the Gen 4 seems more rugged in its coating. Out of the two, I prefer the finish on the Gen 4. While not as sleek and shiny, the Gen 4’s coating resists fingerprints better and for someone who hates a grimy gun, this won me over.

Inside Is What Counts

Under the hood of the Gen 5 is where most shooters will note changes in the G19 design. Overhauling the internals, Glock engineers removed a locking block pin (the Gen 5 G19 now sports two instead of three) and added a firing safety pin similar to what’s inside the G42 and G43 models. The Gen 5 is also equipped with a new extractor and reinforced rails.

The icing on the metaphorical Glock cake, though, has got to be the upgraded trigger. The Gen 5 series welcomes an all-new trigger spring assembly and completely revamped trigger mechanism housing. The new assembly compresses instead of stretching for a smoother feel. The bottom of the actual trigger has been re-contoured and the trigger pin modified so that slots aren’t as deep. Rounding out the trigger work, Glock finished the package up with an updated trigger bar. 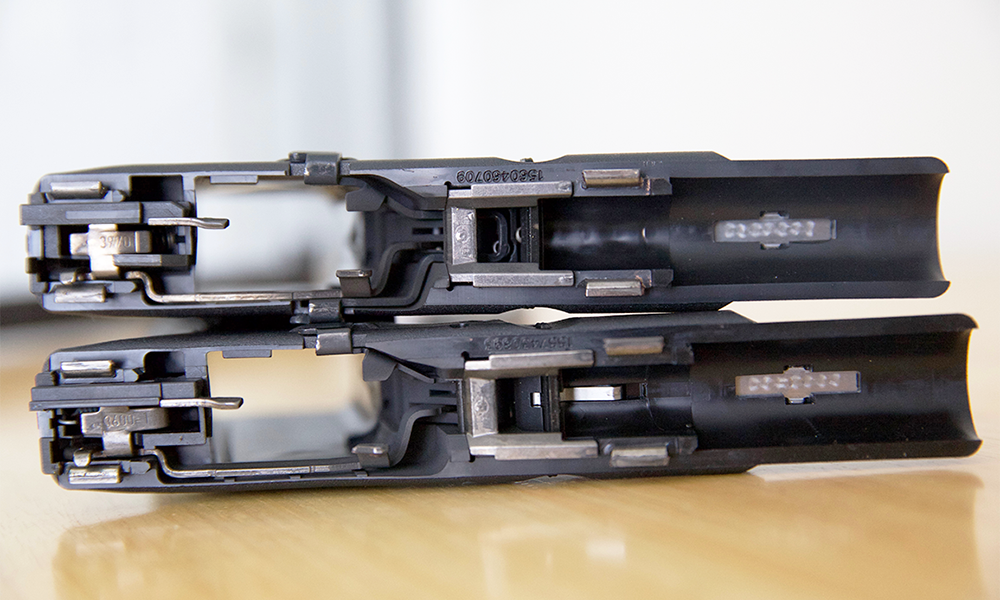 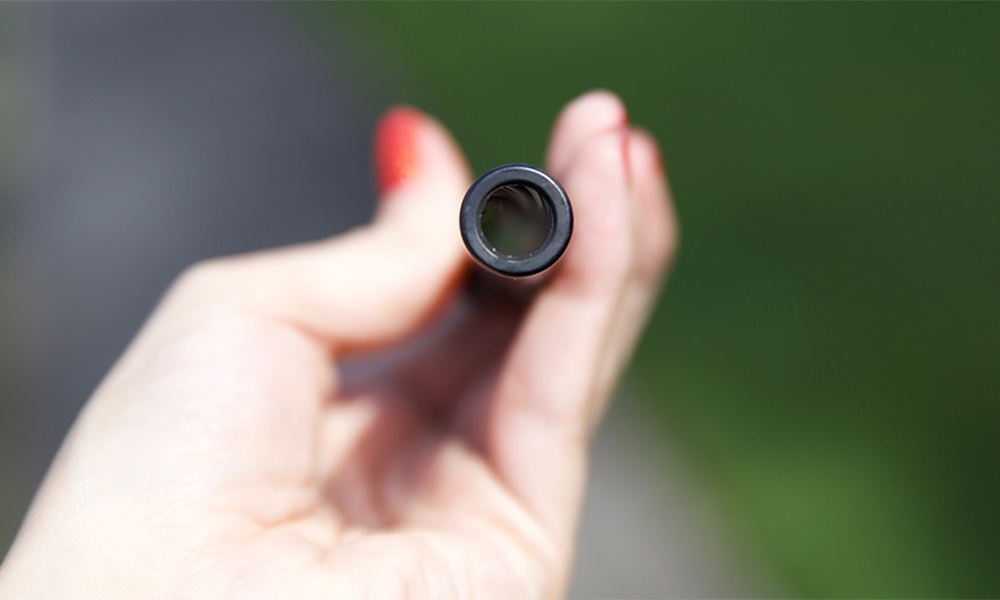 While the new trigger system is a blessing in the sense the Gen 5 trigger is a lot more comfortable and pleasant to shoot, it does come with the downside of not being as interchangeable as past generations. All that said, the new trigger is a definite improvement over the Gen 4’s trigger and thus doesn’t really necessitate swapping parts.

Performance: Is There A Major Difference Between Gens?

One of the biggest changes in the Gen 5 is the addition of a Glock Marksmanship Barrel, or GMB. The GMB forgoes polygonal rifling of the past in favor of a more traditional cut. Glock says this change improves accuracy over the past model G19, but does it really? In short, I didn’t see a remarkable difference. The Gen 5 shoots as smooth as the Gen 4 and my shots landed exactly where I meant them to. Over the course of several months of testing and range time, I saw no difference in shooting between the Gen 4 and Gen 5. If there are improvements, they are so minute that they’re nearly undetectable to the average shooter.

On the range, the Gen 5 did just as well as the Gen 4 in terms of reliability. Spitting lead down range with every pull of a trigger, the Gen 5 had no hiccups or failures. Not surprising coming from a gun maker whose moniker is “perfection.” 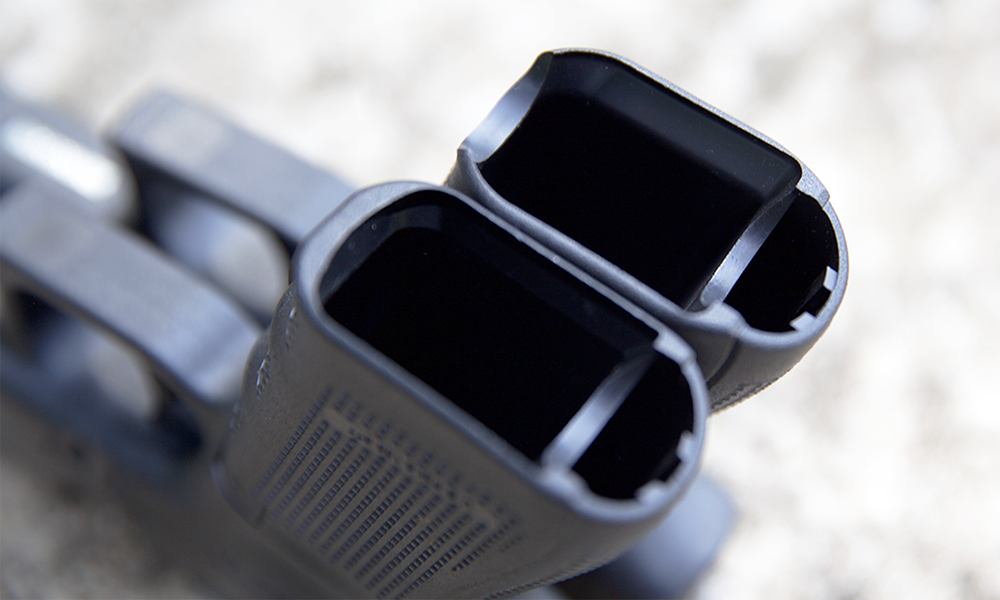 Where the Gen 5 excels performance wise is in a space that some might overlook – the magwell. It doesn’t seem like an area that would benefit from some updates, but in the Gen 5, Glock does an excellent job of tweaking the magwell to make the gun more efficient and easier to handle on reloads. Offering a flared magwell design, the Gen 5 grants a larger workspace to shooters to allow for a quicker reload. Not a make or break feature on the Gen 4, the added space on the Gen 5 does make for an easier time at the range, especially when training for time or under stress.

Though the flared magwell on the Gen 5 makes for slightly easier loading, the accuracy and performance of the two generations is on par with one another.

Final Thoughts: Which G19 Should I Buy?

After months of evaluation, use and carry I can confidently say that the best Glock 19 generation is — whichever you like best. C’mon, it’s Glock we’re talking about here. Both the Gen 4 and Gen 5 G19 continue to uphold Glock’s commitment to quality and reliability and you can’t go wrong with either choice. Though I personally prefer the looks and fit of the newer Gen 5, there are plenty of reasons to stick with the Gen 4. Ultimately it comes down to what feels best in the hand and is the most comfortable to shoot.