Henry Arms Big Boy rifles and carbines are winners. They’re known for smooth actions and straight shooting. No matter the Big Boy, the quality and performance remain steadfast. So, it’s exciting when the gun maker expands the series into new areas like chambering the popular platform for the under-appreciated .327 Federal Magnum cartridge. Henry started shipping Big Boy variants – the Steel and Brass – with the new chambering this week.

For this review, we’re focused on the Henry Big Boy Steel, which is more utilitarian than flashy. It’s the hard-working, wood-splitting counterpart to the eye-catching, brass-alloy Golden Big Boy. But the incentive in buying the Steel is it costs $100 less.

Staying true to tradition – from when Colt set out to match revolvers with “The Gun That Won the West” – Henry included a cartridge meant to appeal to revolver lovers. Federal originally introduced the .327 Fed Mag a decade ago by pitching that it would pack the power of a .357 Magnum but with less recoil than a .38 Special, attributes that make an instant appeal to wheel gun fans. 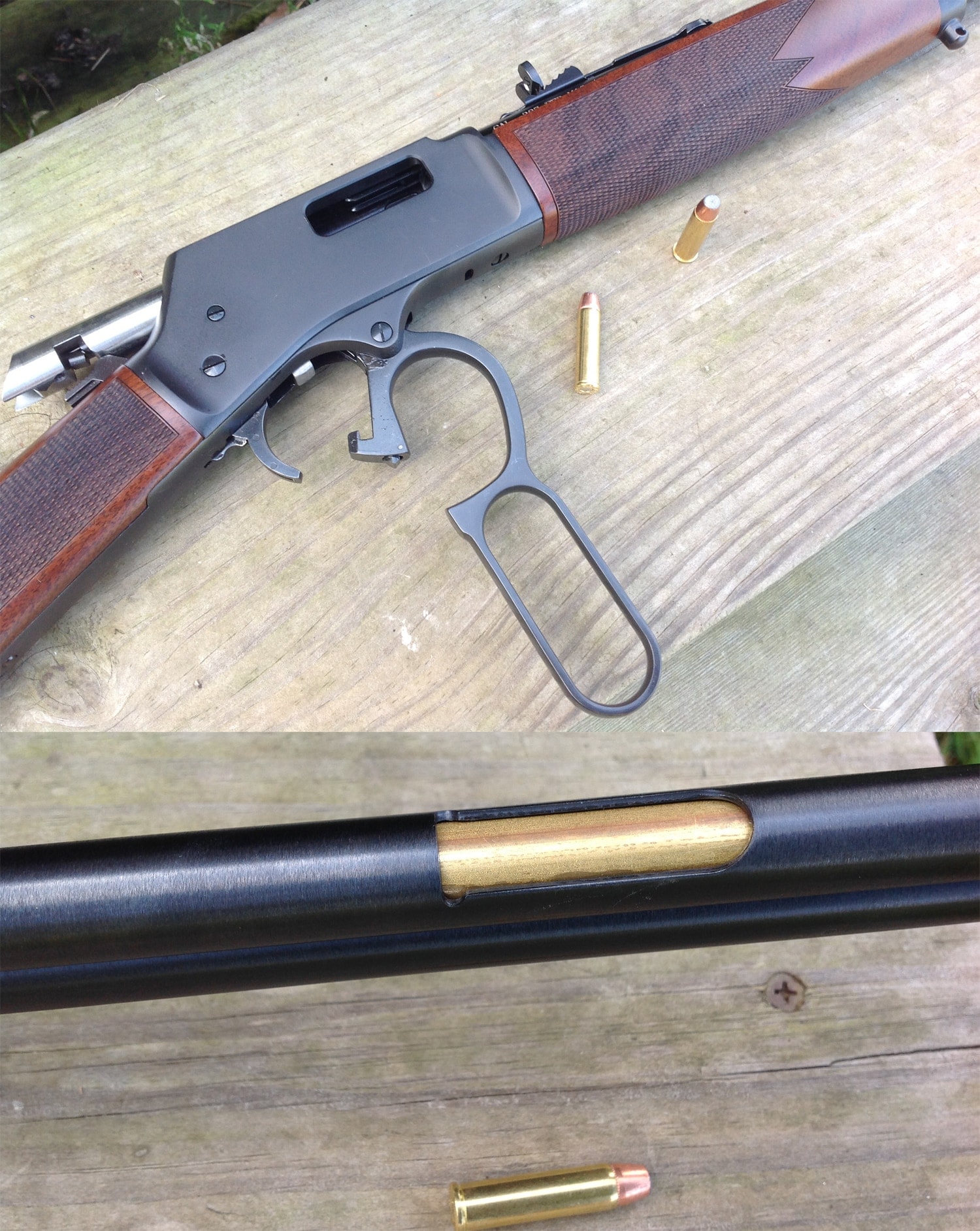 The .327 Federal is essentially a lengthened, magnum iteration of both the century-old .32 S&W and the .32 H&R. The cartridge really excels in the case, which is an 1/8-inch longer than its predecessors and has thicker walls and stronger base that allow for a higher-pressure load. Also, it has slimmer case dimensions than its magnum counterparts to free up space and in turn allow for an additional round or two in the cylinder.

With a wide range of bullet weights, from 85- to 115- grain along with offerings in everything from snubnose revolvers to longer wheelguns to Henry rifles and carbines, it means the .327 can be at once an effective personal defense caliber while also making a suitable hunting companion for anything from small game and varmints to mid-size, thin skinned game.

On the range, we had a healthy selection of factory ammunition. Believe it or not, .327 Federal ammo is getting easier and easier to come by. Current offerings include Federal Premium Low Recoil 85 grain, Federal Premium Hydra Shok JHP, American Eagle 85- or 100-grain SP, and Speer Gold Dot 100 grain.

Firearms chambered for .327 Federal Magnum can shoot most .32-caliber round. (Photo: Kristin Alberts/Guns.com)

Of course, there’s always the option of shooting any of the other, smaller .32 calibers mentioned above. As expected, the Big Boy gobbled up every piece of ammo it was fed, from .327 to .32 H&R, to .32 S&W Long. But since it is a .327 Fed Mag, that’s what we used for the majority of the testing.

Although the gun is drilled and tapped for easy optics mounting, there is something nostalgically satisfying about running a lever gun with open sights, so we ditched the scope and went with the old iron sights.

From the bench, we could easily cover five shots with a silver doubloon – or in more modern terms, a quarter. Even our 40- and 50-yard groups were much better than expected. The longest we shot were 100-yard targets and the Henry grouped just as well as any of us could shoot with open iron sights.

Pistol-caliber carbines tend to offer soft recoil and the Henry Steel in .327 was no different – actually it was a pure pleasure to fire from the Henry! The recoil is comparable to the lightest rimfire, yet ballistics of the round are greatly improved in the rifle over the handgun.

Currently, all the ammo produced – including loading manuals – provide data when fired through barrels no longer than 6 inches. Run that out to the Henry’s 20-inch barrel with 1-in-16-inch twist, and the performance is magnified.

Ballistics by the Inch in-depth charts give a good idea how the muzzle energy increases from a 2-inch barrel to one that is 18 inches, with a general range of 1,056 to 2,186 fps for the American Eagle 100grn SP’s. While we didn’t spend that kind of time analyzing loads on our chronograph at the range, we did measure velocities from the Federal Premium, American Eagle, and Speer Gold Dot. 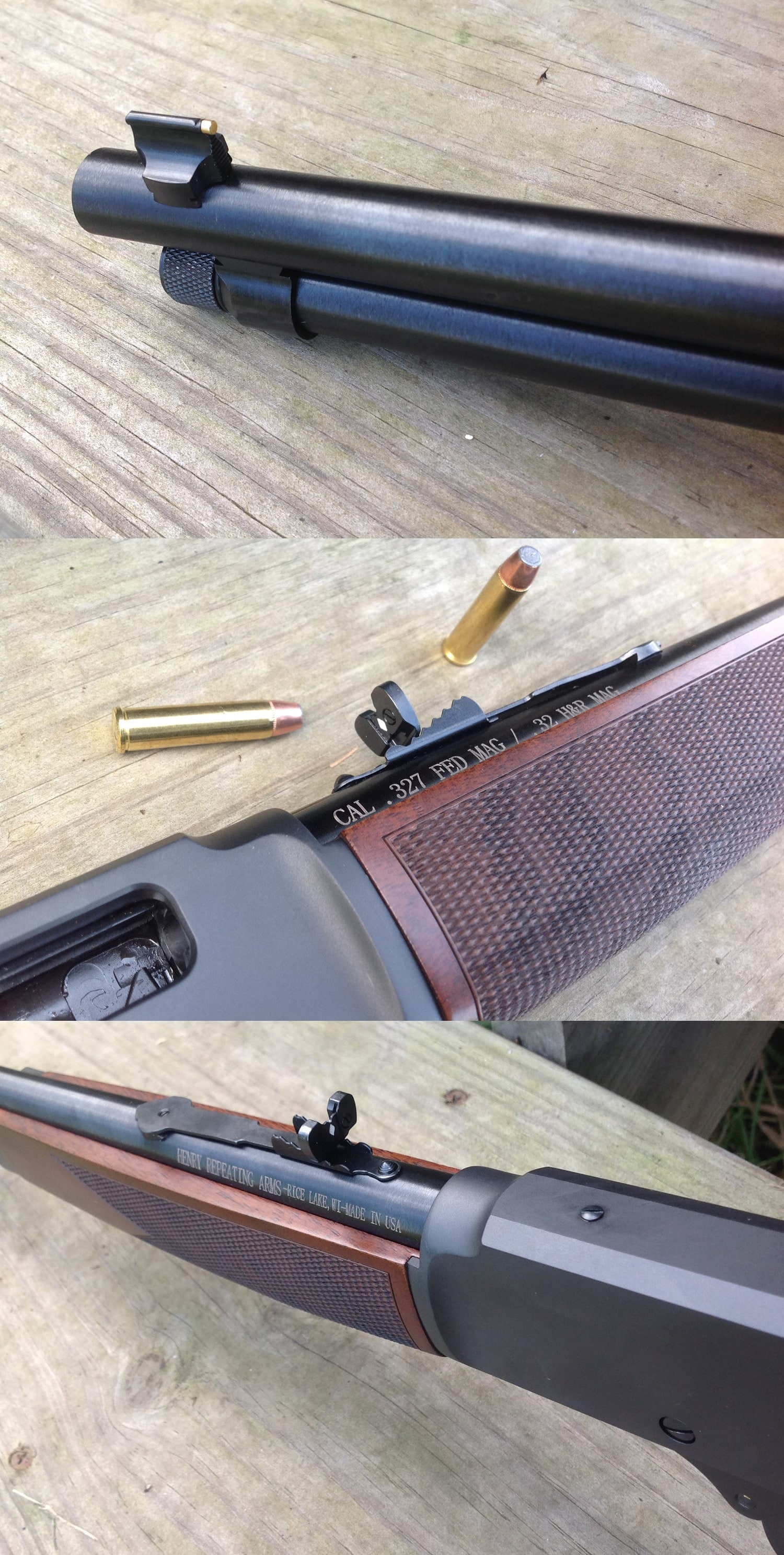 Fired through the Big Boy’s 20-inch round barrel, every one of them clocked in over 2,000 fps, with the American Eagle 85-grain SP’s buzzing by at 2,209. Not only were we impressed with these numbers, but also the Henry’s fit-and-finish, accuracy, and reliability.

When the dust from the range berms settled, the verdict was already in – the Henry Big Boy Steel in .327 Federal Magnum was a winner. Whether you’re a traditionalist and still treasure the 32-20 as do I, or you favor underdog calibers scrapping for market share, the .327 is for you.

If you’re training a recoil-sensitive shooter or simply seeking a companion for your wheel gun, the new .327 Henry has you covered there, too. If that’s not plus enough, buying the latest Big Boy means shooting at least three other .32 caliber rounds as well.

The .327 Federal Magnum may not have all the press, but Henry is still one of America’s leading firearms manufacturers, and if the naysayers give it a go, they’ll find a real-world capable, slimline super-magnum ready to leave its mark on a generation.

MSRP on our Big Boy Steel .327 is a $850, but that price tag guarantees Henry quality and their unbeatable “Made in America or Not Made at All” motto. As with all newbies from Henry lately, patience is a virtue, though, as demand again outweighs production.