Testing a classic single-action rifle is a bit out of the box for this reviewer, who’s usually accompanied by tactical pistols and long guns.  A member of our review team encouraged testing of two Henry Repeating Arms carbines, and I feigned enthusiasm in the name of keeping that partner interested and involved. 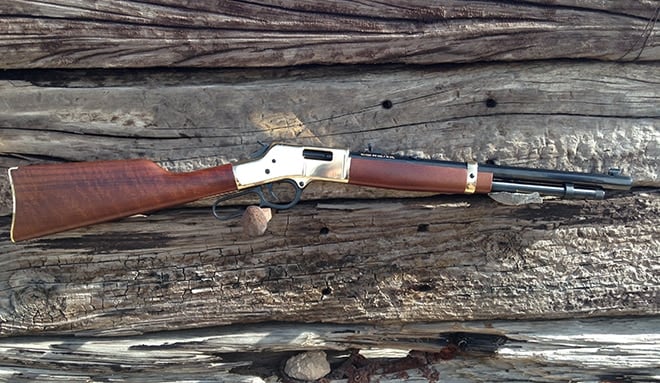 My lack of pep regarding this project was short-lived. In fact, it ended before I even left the gun store.

The Henry Repeating Arms Big Boy Carbine oozes quality and visual appeal.  Unboxing the rifle, including sliding off the soft fabric sleeve around the brilliant brass receiver, the first thing I noticed was its heft.  It’s solid, but not burdensome.

The .44 variant weighs 7.76 pounds, so we can conclude this one is the same or slightly less. The tidy 16.5-inch barrel made it easy to maneuver even in the tight space of the store’s foyer.  The octagonal barrel and brass highlights lend a unique and attractive appearance.  Now I was filled with anticipation to hit the range.

In an age when some manufacturers promise to void warranties or issue ominous warnings about functional problems resulting from not using upper-end, American-made ammunition, it was surprising to find the following instructions under “Ammunition Selection” in the owner’s manual:

Henry RAC Firearms are designed to function with a variety of brands of types of factory-manufactured ammunition in the appropriate caliber, but not all ammunition produces the same result. Henry…..recommends that you fire different ammunition…..Once you find the ammunition which functions best, keep using it. 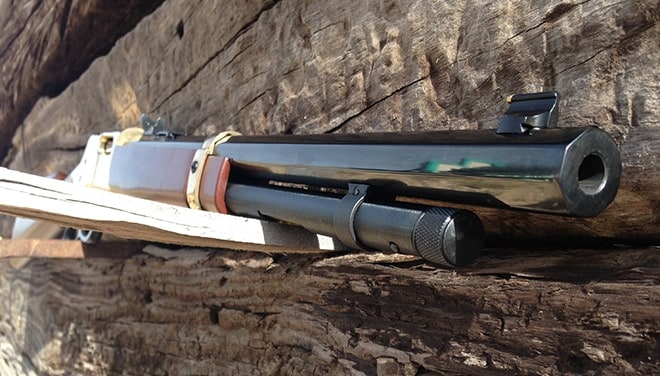 Later in the manual, there’s an admonition against Blazer and other aluminum-cased ammunition. Fair enough.  Knowing I’d probably wind up shooting a lot for this test, I opted for quantity over quality (not to mention what was in stock at Walmart).  To the range I went with a box of Winchester .38 and Perfecta .357.

The magazine tube holds seven rounds of .357.  The only slight difficulty operating the carbine at first was loosening the knob of the inner magazine tube, but I soon discovered that a push down-and-twist motion is what it needs—at first, I was only doing the twist part of the equation. 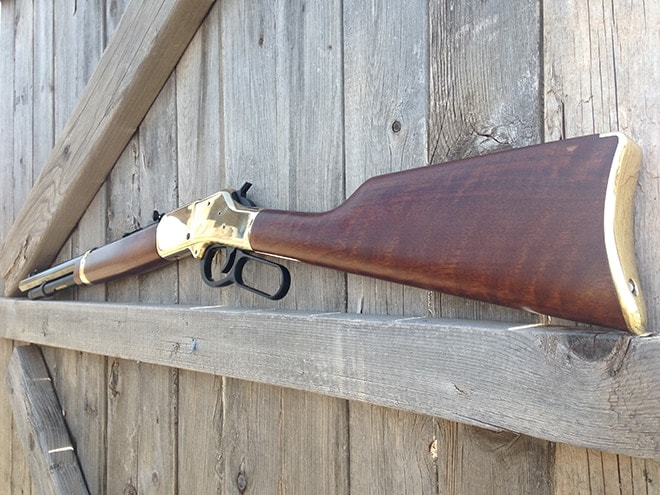 The rich walnut stock and polished brass trim and buttplate give this carbine a collector’s feel. (Photo: Team HB)

Shouldering the Big Boy, our team found its balance easy to maintain for shooters with a range of adult body sizes.  The compact, hefty barrel rests in the hand with the stability of a bull-barreled rifle, but does not readily induce fatigue.  The barrel’s octagonal profile and thickness lend an appealing robustness to the Big Boy’s looks.

Firing this rifle is pure joy.  Using .38, it has no felt recoil.  The solid materials and construction absorb it all.  Once I got a feel for indexing the loop lever, relatively rapid fire was easy to conduct. Using .357, recoil remains nearly undetectable, though the sound is more concussive as expected. 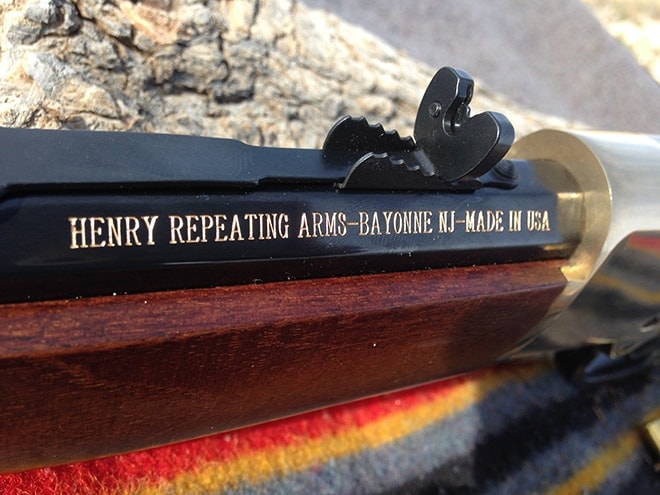 All Henry firearms are made in the USA, including the Big Boy carbine. (Photo: Team HB)

The Big Boy cycled flawlessly through approximately 60 rounds of each caliber before we decided to try mixing calibers in the tube.  It made no difference in mechanical function. However, we did notice a difference in apparent accuracy.  A 36-inch square steel target at 175 yards was relatively easy to ring with .357.

I never did manage to hit it using .38, and the round left no identifying evidence downrange to provide feedback on where they were hitting.  It’s evident that, as with any rifle, one would benefit from picking one caliber and one brand of ammunition and spending time refining sight adjustments for optimum performance. Or, attach a scope with the pre-drilled and tapped mounting holes and this carbine is ready to take game or targets at greater distances. 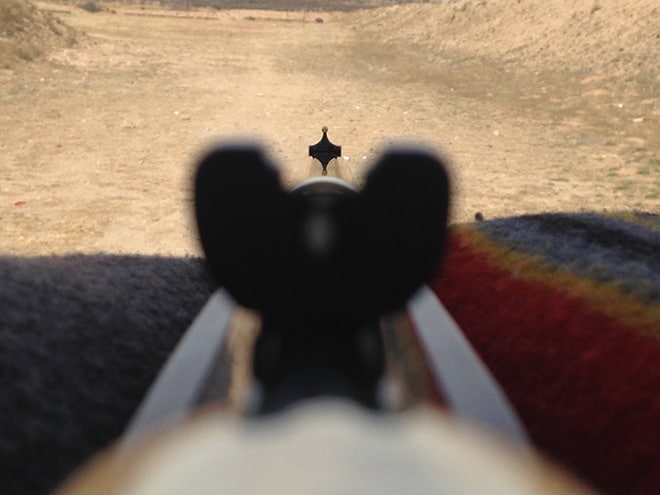 The trigger is a typically light and smooth single-action one.  There’s plenty of room for larger fingers or gloved fingers. The loop lever proved easy and intuitive to use. Larger loop levers are an optional accessory.  Decocking the hammer is simple and as safe as that process can be, thanks to the beefy spur that allows the whole pad of the thumb to accompany the hammer on its smooth trip to home base. 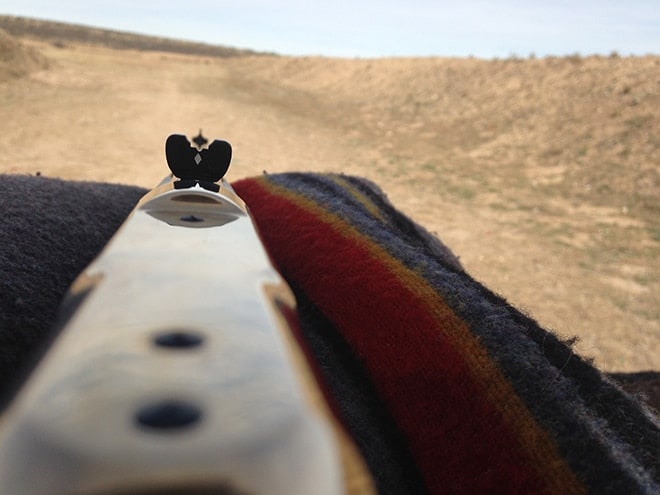 The sights are large and quick to acquire.  It didn’t take this reviewer long to become fond of the tiny brass insert atop the front sight.  It gives a clear point of focus sans glare. The sizable heart-like rear sight is highlighted with a diamond-shaped insert that adds to both appearance and function—it’s also part of the elevation tuning mechanism.  The rear sight is reversible. Windage can be adjusted by drifting the rear sight.  The user has plenty of leeway for zeroing to serve their choice of application. 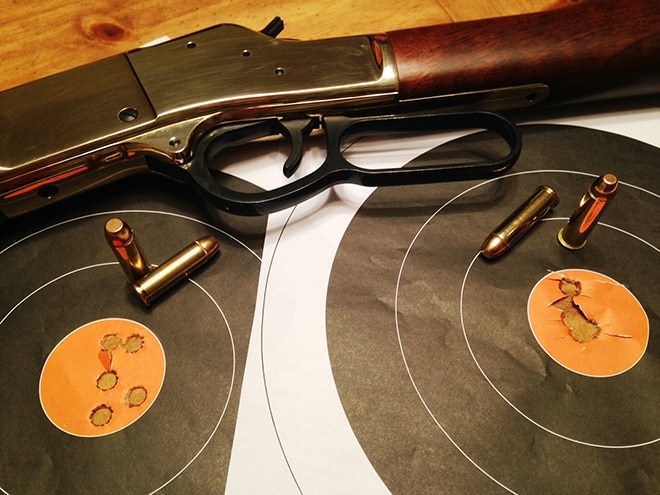 Accuracy out of the box was better than acceptable.  Without any sight adjustment using a six o’clock hold, .357 drilled a single five-shot hole from 25 yards, while .38 produced a tidy 1.25-inch group inside the bullseye.

The two-caliber capability of this rifle broadens its applications.  Recreational shooting and basic marksmanship training are affordable and non-concussive with .38. Hunting or other applications requiring accuracy, especially at longer ranges, are easier achieved running .357, though both will work. 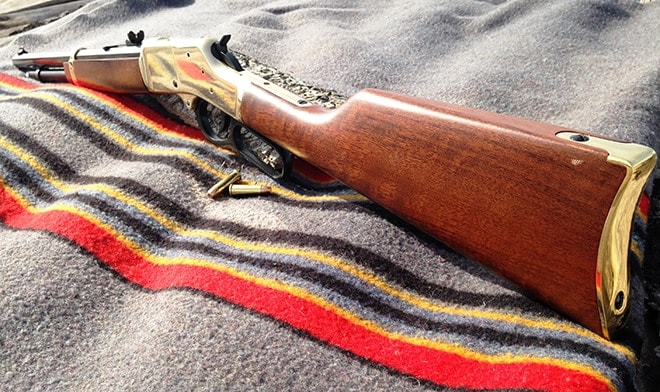 The balance between weight, size and overall length is superior on this Big Boy. (Photo: Team HB)

The brass trim of this model is very attractive, but the reflective surface is inappropriate for nighttime and/or self-defense applications. It requires constant wiping-down during use to maintain a fingerprint-and dust-free finish. The richly-grained walnut stock also forces the user who’s even a little appearance-conscious to give pause frequently while using this carbine and even when placing it into storage. There are plenty of collectors and shooters who will feel that this extra effort is worthwhile in exchange for enjoying the beauty and function of this gun. MSRP for all three available caliber models is $899.95. Real prices are in the ballpark of $700.00. 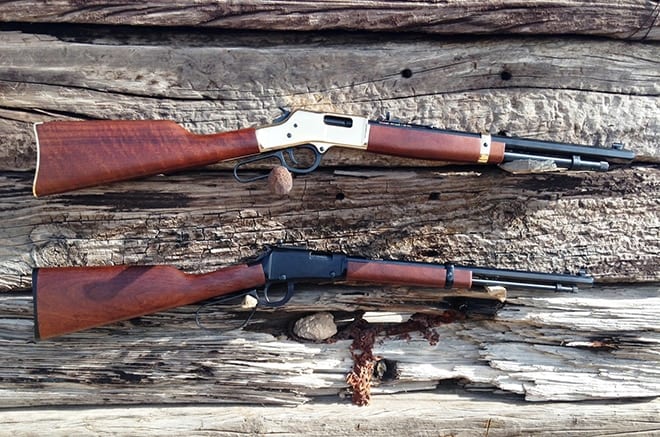 Henry’s Big Boy, top, has a little brother, below, in .22 mag which I will be looking at soon. (Photo: Team HB)

Handling and shooting the Henry Big Boy .38/.357 was, for this reviewer, a pleasant surprise (yes, they told me so).  It’s easy to handle, reliable, accurate for most purposes, and handsome—and perhaps best of all, American made. It’s also available in .44 Magnum and .45 Colt calibers, and is Single Action Shooting Society-approved. The Big Boy would make a great gift for any gun lover—including yourself.