Heckler & Koch VP9 is a relatively new entrant to the striker-fired handgun arena from the company that originated, and then stepped away from, double-action only pistols for decades.  Maybe HK was waiting to have enough innovative features that could do more than replicate familiar ones in today’s market.  If so, this is an impressive effort.

There’s a lot to like about the VP9, and a couple things that leave a person puzzled.  I’m going to hit the highlights.

At 25.56 ounces, the VP9 is four ounces lighter than the Springfield XD 9mm, half an ounce heavier than the Glock 17, and 1.5 ounces heavier than the M&P 9mm.  Its 4.09-inch barrel places it in the full-size category. If the abundance of concealment holsters available for this gun is any indication, lots of people are choosing it as a hefty concealment partner.

On the frame is a sizable rail that allows for attachments of virtually any pistol light/laser accessory, expanding its utility as a home defense/bedside gun.

The first of three major innovations begins with the grip design.  The VP9 goes beyond the modern standard of three sizes of backstrap inserts for depth adjustment. It also has three choices of grip side panels, making the grip’s circumference more or less full in the operator’s hand.

The panels are easy to change with the removal of a simple roller pin. With the medium and large panels, the grip has a distinct hump in the center, which Walther PPQ fans will find familiar (in fact, if there was any copycat business going on in the product development phase, it was surely by someone who’s fond of the PPQ profile).

This gives the operator the sense of the gun naturally filling the hollow of the palm.  The “hump” effect is largely negated with the smallest backstrap panel.  Replacement panels are $9.95 and appear to be readily available from the manufacturer.

The VP9 is suited to a wide range of shooters, as the grip adjustments allow shooters with very large hands as well as those with smallish hands to reach the trigger with room to spare. This writer wears a women’s size 8 glove, and the VP9 is a good fit with the smallest grip panels.  Two large-handed men who participated in testing also prefer the smallest panels.

The grip is pebbled all around and offers good traction without being rough.  Speaking of traction, the term “grip” can also be applied to the slide.  Here, HK took a chance and offered something truly new—removable inserts on each side of the slide, located in line with the rear sight, to assist in charging.

The concept sounds a little weird and unwieldy, but these little protrusions do offer subtle leverage and indexing, and are well out of the way when the gun is holstered and in use.  The five shooters in our trial were all skeptical of this feature at first, and all decided it was at least cool-looking, and at best useful, after operating the pistol.

The low bore axis of the VP9 and its operator controls make it exquisitely shootable. A three-dot, nighttime-luminescent adjustable sight system is better than most stock sights, though the brightness of the front sight is lacking, perhaps due to being in the holster and less exposed to recharging sunlight.

The paddle-style magazine release is efficient to operate—faster, in fact, than the traditional firing hand thumb-to-mag-release motion when performed with the trigger finger, or by thumbs long enough to reach the paddles without changing grip position. 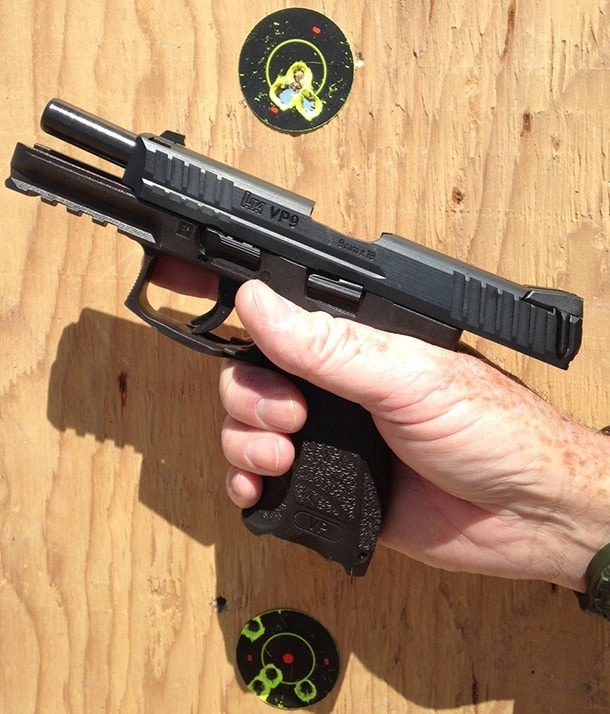 The VP9 really shines in terms of friendliness to left-handed shooters.  It’s truly all-ambi, all the time.  The magazine release affects the front/center of the magazine while it’s at home in the gun, avoiding the one-side errors inherent in the M&P’s design, which has become infamous for not working when configured for left-thumb (right side of frame) release.

The slide latch/release mechanism is extended on the right hand side of the frame, making the process of releasing and locking back the slide even easier for southpaws than for the right-handed.  There’s only one fly in this ointment, which is addressed in the “things we should caution you about” section.

Operation is reflective of the quality most associate with German engineering.

The slide goes into battery infallibly, regardless of whether the operator gives the slide a full-tension rack or releases it from the latch on either.  The tapered and highly polished ramp on the barrel probably helps the reliability of feeding… God knows we gave the VP9 every chance to misfeed.

After approximately 400 rounds fired with all these brands, in rainy and sunny conditions, with a sometimes compromised grip as one shooter experimented with flashlight techniques, the VP9 has yet to malfunction.

The trigger has minimal and smooth travel, a crisp break, and clear but not clunky reset. To this writer, it’s the closest to the exceptionally nice trigger on the Turkish Canik TP9-SA, and better than that of other common full-size pistols—as it should be, as the VP9 costs more than any of these.

Its accuracy is good; we’ve yet to discover if it’s exceptional.  A 8×20-inch steel plate was fired on from distances up to 50 yards with a dead-on hold, and shots consistently rang on target.

Things not so great, yet not so bad

HK managed to pull off what is perhaps a great joke on states that mandate loaded chamber indicators. The extractor’s sides are painted HK crimson and are slightly more visible when the chamber is loaded.

The extractor itself, as may be expected in the modern era of polymer-frame handguns, allegedly protrudes when loaded, and this is advertised as tactile confirmation of a loaded chamber.  It’s a very subtle difference of both color and texture, as the red is visible upon inspection of the VP9 in unloaded condition and the “raised” extractor is barely so when the gun’s loaded.  Whether this matters to the prospective owner is a matter of personal preference.

The magazine well has cut-outs on each side to allow an easy grip for, say, clearing double-feeds.  That might be useful if the gun would ever malfunction.  The magazines fall cleanly out of the well, empty or loaded, without assistance. That’s nice.

There’s an oversize, bright red nubbin on the back of the striker, visible when it’s in the ready position.  In this writer’s estimation, it lends an oddly Fisher-Price look to an otherwise BMW-style weapon. One gets the feeling that HK wanted one last chance to show shooters its trademark color… but this also has nothing to do with function, and thus doesn’t really matter.

Things we should caution you about

Magazine availability and price are sore spots at the time of this writing.  Magazines are in limited supply and quickly gobbled up from online retailers.  Prices are on the high side, from $37.99 to $54.95 before shipping.

The VP9 is boxed with only two mags, and, here comes its biggest detracting factor—they only hold 15 rounds (yes, CA friends, you can buy 10-round mags now).  For a pistol that fits in the same spatial profile as the Glock 17, with its 17-round magazine, this is a real disappointment, and will prevent folks from choosing the VP9 for competition purposes.

The bright side of this issue is that HK P30 magazines, made by Mec-Gar, are the same as the VP9 uses.

Muscle memory and left/right handedness will be an obstacle if one chooses this gun as a stablemate to others with more traditional magazine and slide controls.  This is especially true for left-handed shooters, who finally have been catered to with this design.

While the controls are supremely efficient (and thus fast) to operate, those advantages are negated for those whose fingers have a habit of going to the typical operation points of most pistols.  The VP9 is thus ideally suited for the shooter who will use it as a dedicated, primary gun to the exclusion of others.

The suggested retail price is $719.  Considering the quality and features included in this gun, particularly for left-handed shooters, the added expense might be justified.