Brimming with Israeli engineering and innovation, IWI succeeded in bringing the SAR to life in the American market.

Indeed, the SAR’s bullpup design is gaining steam within the close quarters crowd, winning over law enforcement agencies and becoming the obvious choice for home defenders across the nation.

Unfamiliar with this weapon? Not anymore: 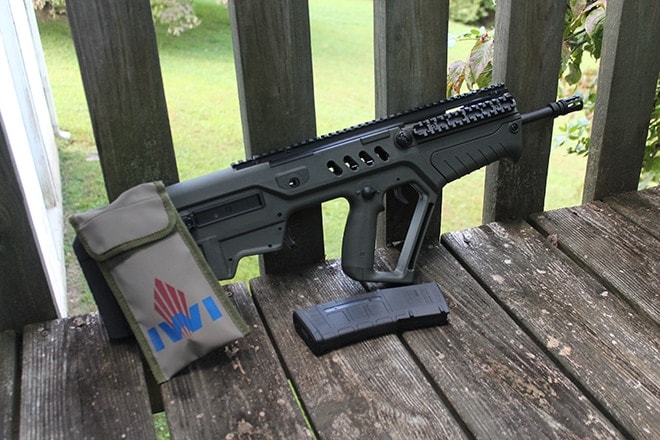 Out of the box, IWI’s Tavor SAR comes with a standard magazine and cleaning kit. (Photo: Jacki Billings)

The Israeli’s know weapons and they spared no expense of their expertise in the development of the Tavor SAR. Meticulously designed, the SAR is the epitome of purpose-driven engineering with every element of the SAR calculated and designed with a specific function in mind.

Chambered in 5.56 NATO, the SAR is a gas powered compact rifle. It comes in two packages, the 16-inch and the 18-inch, referencing barrel length.

For this review, I chose to roll with the smallest rifle I could get without a tax stamp—the Tavor SAR G16.

The G16 model measures in at an overall length of 26 1/8 inches with a 16 ½ inch barrel. For those following along at home, measure a standard duffel bag then imagine a bullpup sitting in there. That’s right, the SAR is small enough to fit in standard bags; no need for a bulky rifle case here. 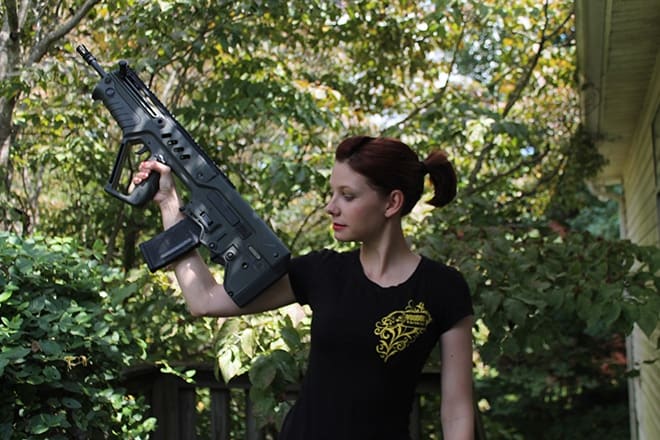 Weight is distributed well and even smaller shooters like myself will find the SAR easy to handle. (Photo: Jacki Billings)

Weight wise, the SAR G16 is just shy of eight pounds. Weight can be a consideration in a package this small: while a traditional AR disperses its weight across a longer platform, the SAR is forced to balance its weight along a much shorter one.

The logical assumption would be that this would make the SAR feel heavier but—perhaps, chalk it up to flawless Israeli engineering—it doesn’t feel any heavier than what I’m accustomed to in a rifle. In fact, when shouldered, the weight seems to dissipate and is easily manageable. The SAR’s polymer build surely helps shave some of the perceived weight off the platform; though, it doesn’t cheapen the overall feel.

Tried and true American rifle fans will also notice that the bullpup features a unique build with the action resting behind the trigger assembly. I promise this is functional and works on this platform. Fitting the action behind the trigger and incorporating it in the buttstock saves on space, which in turn, makes the SAR an excellent close quarters/home defense weapon. Though you won’t find me out clearing houses with Israeli forces, I do prefer a stable, rifle platform for home defense and to me the SAR obviously fits this bill. 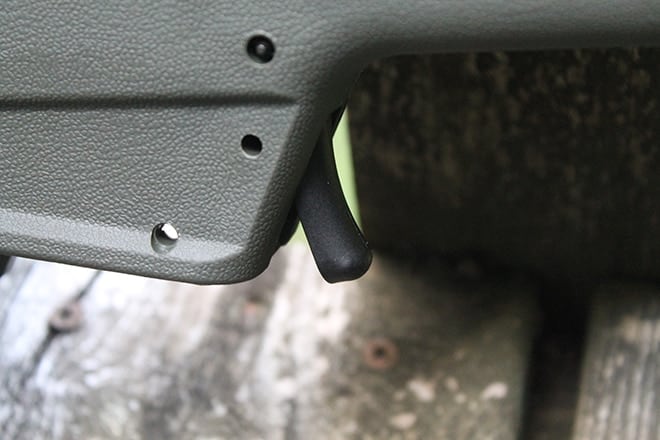 The magazine release is situated on the underside of the stock and is ambidextrous. (Photo: Jacki Billings)

The magazine release and bolt release are both situated on the underside of the stock. The mag release, for me at least, took some training to nail. I wasn’t accustomed to the location and frequently fumbled to release the magazine. The bolt release, on the other hand, I found to be easy to use and conveniently placed.

Also convenient to the SAR design is its ability to convert from a 5.56 NATO to a 9mm Parabellum using an IWI conversion kit. The kit is available for order, and though I haven’t tested it out, word is it’s fairly easy to swap. For those that like a little blackout with their rifles, IWI recently announced a .300 BLK is in the works for the SAR and should be available soon. 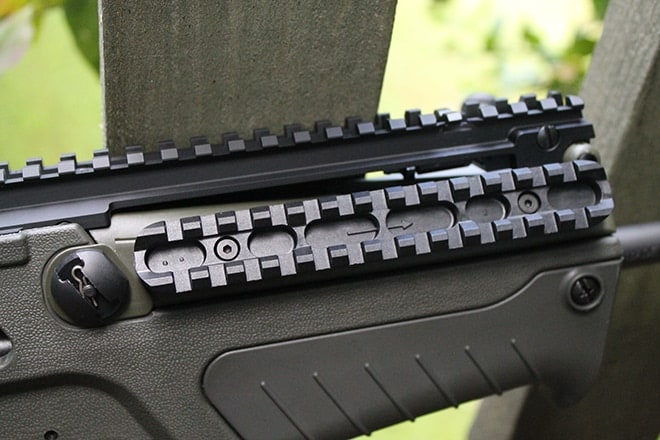 The SAR is equipped with both a top rail and side rail for accessory mounting. (Photo: Jacki Billings)

The SAR comes in the standard tactical colors: black, flat dark earth, and olive drab green. While I would never chose a firearm based on color, having options is never a bad thing, and for this review I chose the OD green.

IWI’s OD green is a subtle green that blends well with foliage and I had fun traipsing around the woods with it in tow. For the tacticool, the color also seemed to be a winner as I got plenty of compliments from the kitted out kids beside me when I took it to the range.

Despite the designs blocky nature, the weapon shoulders well. I had no issues getting a tight, flush fit against my shoulder. Throwing on a chest plate? No problem. The Israelis certainly are no strangers to battle gear and have engineered the SAR to work alongside body armor. 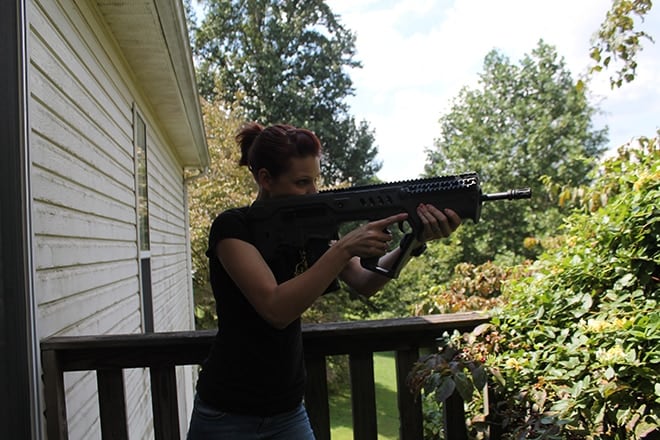 Despite a blockier design, the SAR shoulders easily and well. (Photo: Jacki Billings)

With a somewhat modular design, the SAR can be configured to fit certain needs of the operator. The SAR ships with a standard magazine, but of course you can swap that out with any standard AR magazine.

The SAR features a full length Picatinny top rail, perfect for mounting your favorite optic. If you’re looking to mount a light or other accessory to the SAR, a standard short rail sits on the side of the firearm, opposite the charging handle, at a 45-degree angle.

Also, sneakily built into the top rail, is a pair of iron sights. These sights fold down into the rail and if you didn’t know they were there, you’d probably miss them. While I recommend pairing the SAR with a nice, red dot, the irons are great for back-up.

The SAR is not without its flaws. My training partner was the first to notice the ridiculously heavy and mushy trigger. The rifle does not even come close to having the crisp factory trigger many of us have come to expect in a modern rifle and for trigger snobs this could easily be a point of contention. With a pricetag at the $2000 mark, I can see how many shooters would be hesitant if not unable to spend another $300 swapping out triggers. 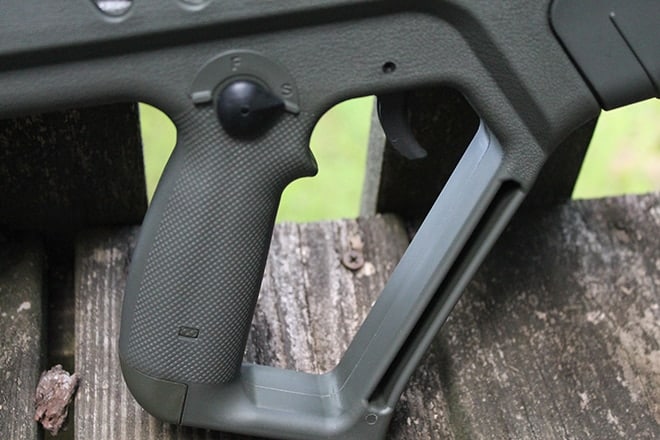 Some shooters find the trigger to be too heavy and mushy, but I preferred the extra trigger weight while shooting. (Photo: Jacki Billings)

Personally, the trigger on the SAR didn’t prove to be a bother for me. I prefer a little heft to my triggers and the mush wasn’t a deal breaker.  Let’s be real, I’m not looking to take over a sniper position on a SEAL team. My intentions for this rifle are close quarters, home defense, for which the stock trigger will do just fine.

The SAR also unfortunately lacks in the lefty department. This rifle was built for righties and although there is a left handed conversion kit, you better pray you never need to unexpectedly fire left-handed. If you do, be prepared to battle the ejection port and hot, flying brass. Like I said, there is a conversion kit but it does require some work and attention, which in the heat of battle is most likely not be your best option. 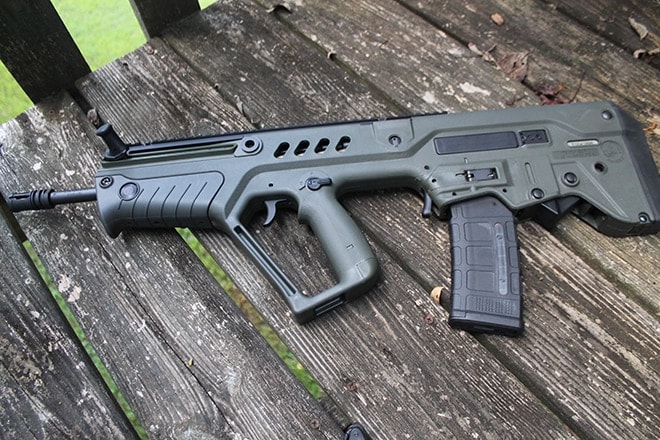 Some flaws aside, IWI’s Tavor SAR is a winner. What it lacks in a crisp trigger, it certainly makes up for with maneuverability and reliability. A through and through close quarters bullpup rifle, the SAR is the perfect edition to any home defense repertoire. The Tavor SAR retails for $1,999.