The Kel-Tec Industries PMR-30 pistol, chambered in .22 magnum, is a full-size handgun with a lot to offer. We had the opportunity to test both the pistol and its larger companion, the CMR-30 carbine. Each of these firearms is a standout on its own. Together, they’re a one-caliber mini-arsenal with a broad range of capabilities. 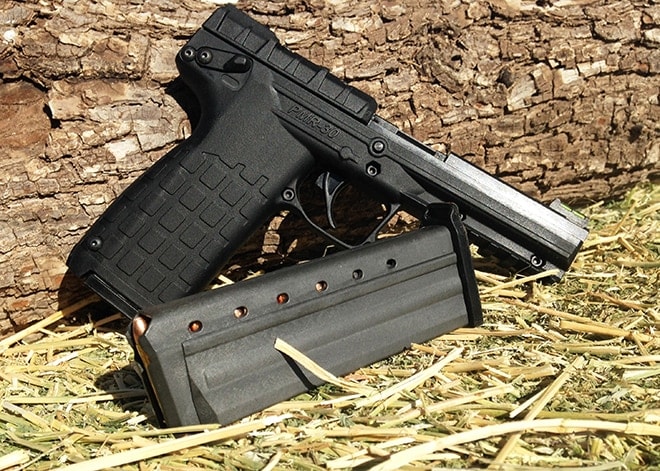 The gun comes boxed in a hard case with two steel thirty-round magazines that are, incidentally, interchangeable with those of the rifle. It also has a highly detailed, full-color owner’s manual, a compliment to the customer in a time when most companies are getting away with chintzy manuals that drive gun owners to homemade internet videos, where we can only hope the information is accurate, to figure out takedown and reassembly.

The PMR-30 profile is a flat, slim 1.3 inches. It’s full size, with an overall length of 7.9 inches, the barrel taking up 4.3 inches.  What’s surprising is the weight—with a fully loaded 30-round magazine, the PMR-30 is only 19.6 ounces.  Like the carbine equivalent, the CMR-30, it’s ideal for stuffing into a bug-out bag and a host of other uses where dependability and portability count. 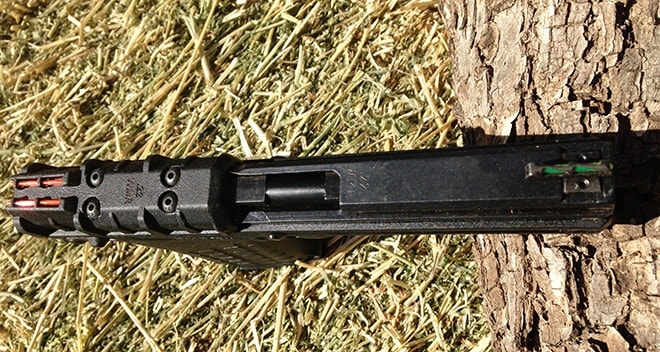 An innovative mix of materials is responsible for this gun’s incredibly light weight.  The only steel is in the slide and barrel.  The frame is aluminum, and I’d have sworn the magazines were some sort of thin steel, but they, along with the rest of the gun, are molded from Zytel, described as glass-reinforced nylon.  The stuff is so sturdy that, except for the weight, it’s hard to believe it’s not steel.

The ambidextrous safety is big enough to operate even with gloved hands, and easy to switch.  Like the carbine version, the PMR-30’s magazine release is located at the bottom rear of the magazine well.  Magazines drop out easily, full or empty, but the position of the release button takes some getting used to, and except for the most creative among us, makes releasing the mag a two-handed operation. 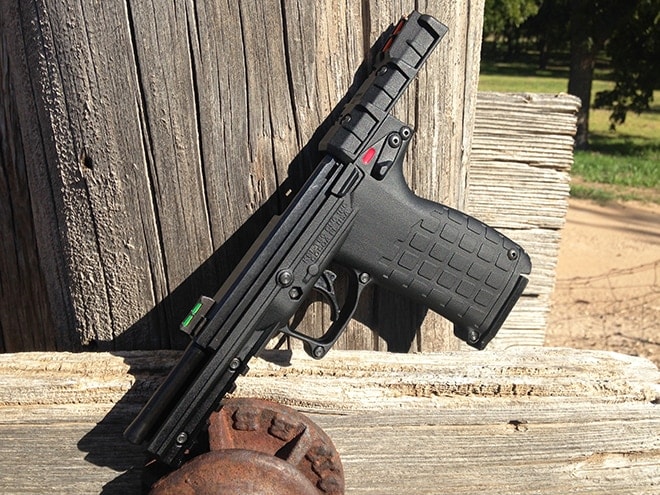 Rugged grips are appealing on the Kel-Tec PMR-30, but could rub over extreme use. (Photo: Team HB).

In the looks department, the PMR-30 should appeal to those who like a modern yet rugged design.  The grip is textured with large polymer squares—“checkering” might mislead the reader, as these squares resemble the sole of a hiking boot more than the subtle carving the term implies.  This smooth but grippy surface would only be uncomfortable, in this reviewer’s estimation, after firing several hundred rounds in one session.  It’s the rare shooter who’d venture that anyway in the current atmosphere of .22 mag availability and pricing—not the gun’s fault, of course, but if I were buying one gun with which to do exhaustive practice, that could be a deterrent to picking this one. 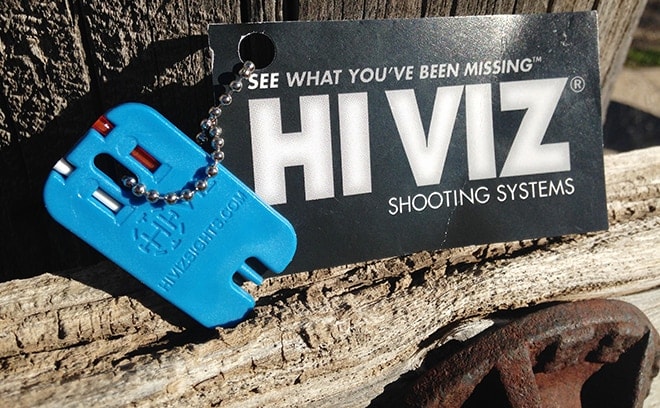 Kel-Tec has stepped out of the box in terms of its partnerships with sight companies that increase the functionality and value of their guns.  The PMR-30 is a good example, featuring Hi-Viz brand fiber optic sights.  The front sight is drift-adjustable for windage, but the rear one isn’t adjustable. A tool and spare light tubes are included with a new PMR-30.

The trigger pull is light but on the long side.  Kel-Tec rates it as a four- to six-pound pull. On the copy we tested, it feels closer to four.  It’s a longer press than the CMR-30, the carbine version of this handgun.  Firing from reset shortens the trip enough to make shot sequences enjoyable. 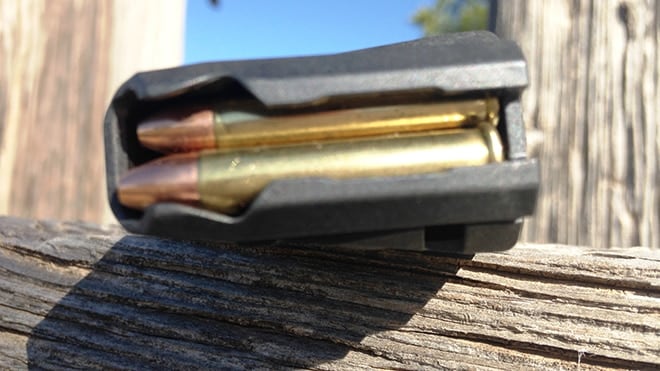 Slide operation felt less than silky-smooth before the first shots were fired, so we took the precaution of putting a drop of oil on each side of the slide.  In retrospect, it probably didn’t need this, as it cycled without issue.

It is critical to load the magazines according to instructions.  After about 25 rounds, insertion becomes challenging and rapping the back of the mag on a flat, wooden surface after every round over 25 is almost a necessity to get the rounds to seat properly.  A failure to feed, the only malfunction experienced during this test, resulted from a hastily loaded magazine, which we did to see if non-compliance with instructions, even with an only partially full mag, makes a difference.  It does. 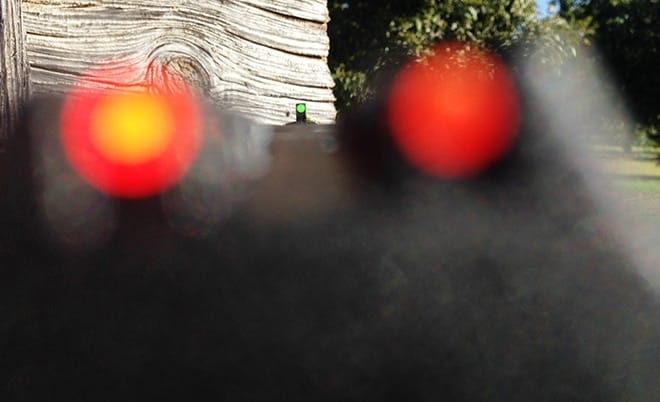 the fiber optic sights are effective in natural light but are not night sights. (Photo: Team HB)

Packaged with the PMR-30 is a factory insert suggesting some brands/types of recommended ammunition. The overall guideline is to use American-made, high-power loads, generally of at least 40 grains.  However, the non-exhaustive list of recommendations includes 33-grain Remington Premier Magnum. As with the carbine version of this gun, it performed most accurately for us with CCI’s TNT Green, a 30-gram, lead-free hollow point that would nicely transition from target to hunting and defensive use.  TNT Green produced a very tidy group from an unsupported firing position at 11 yards. We used other CCI types as well.

The sights proved to be fairly well centered out of the box, a boost to accuracy and, at least for this copy, they seemed better-centered from the get go.  It’s possible the 11 yard testing distance for the pistol, versus the 25-yard distance at which most CMR-30 testing was done, accounts for the comparison. 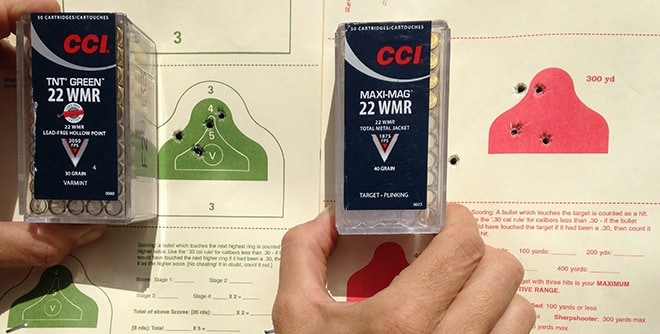 Twenty-two magnum is definitely not most folks’ choice as a defensive round, but this underdog of the ammo world has more punch to offer than one might expect.—the muzzle velocity of TNT Green, for example, is rated at a blazing 2,050 feet per second. One tester refers to this caliber as a “best-kept secret.”

Prior to this test, this reviewer had operated a .22 WMR-caliber firearm but hadn’t taken the opportunity to clean one. Those more familiar with the load may chuckle to know I was relieved to discover that this rimfire ammunition leaves much less carbon buildup and general gunk in its wake than .22 LR.  After 60 rounds, the action was as clean as any centerfire pistol’s would be. 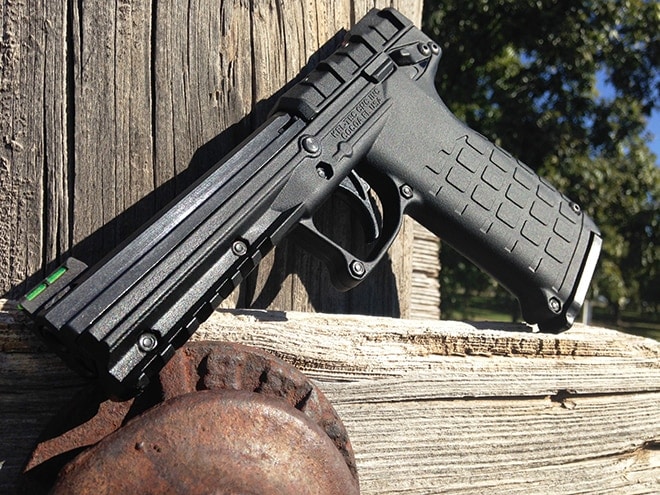 Good thing, because it’d be easy to drop and lose the small takedown pin that allows for disassembly and cleaning.  Other than the pin, takedown is a fairly predictable process for anyone accustomed to cleaning a striker-fired pistol.  The exception, in addition to the pin, is the presence of a white plastic-looking buffer that lives just inside the front of the slide and could also be easily misplaced in windy conditions.  The manual makes no bones about the importance of putting the buffer back into place before firing.  There’s also a stern admonition to not drop the hammer while the firearm is disassembled.

Overall, maintenance is just marginally more complicated than a typical striker gun. As long as you can set up a cleaning bench in an uncluttered and wind-free area where the two small pieces won’t get lost, takedown, cleaning and reassembly aren’t difficult.

MSRP for the Kel Tec PMR-30 is $454.55.  Online prices as of this writing range from $420 to $550, with the desert tan version (the one color option other than black) generally priced higher than the black copies. It’s not unusual to find Kel-Tec’s American-made firearms selling for above MSRP. 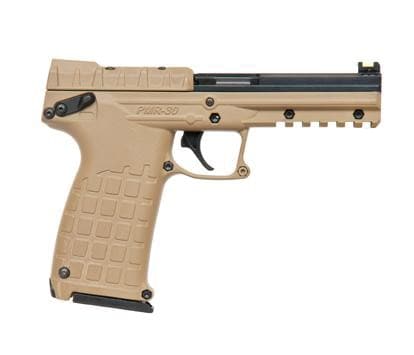 Kel-tec guns often sell above MSRP and for the PMR-30, Desert Tan models are usually pricier than black.

The PMR-30 is definitely fun to shoot.  More importantly, it just might be the perfect choice for a home defense gun for an elderly or arthritic person, in addition to being handy for the trail—assuming one has taken the time to load both 30-round magazines in advance. The slide is easy to operate, the sights are intuitive to use (at least with some ambient light), and the rail allows for attachment of auxiliary lighting.  The recoil is negligible. With factory-recommended ammo, loaded as instructed, it can be counted on to go “bang” and have the desired effect on the target—over and over again.