I have quite a history with the Keystone Arms Crickett. Despite being too tall and too big for this kid-friendly single-shot rifle, the Crickett is probably my top picks for any task in which weight savings is a concern — like backpacking.

Keystone has built a fine, inexpensive rifle indeed, but fumbling with loose rounds after firing your one shot could be a bother. So Keystone has launched an entry into the repeating rifle market — the Model 722.

There are four primary variants of the 722: the Sporter, Compact, Classic and Varmint models. My particular test rifle is a Compact featuring a walnut stock with generous checkering on the fore-end and semi-pistol grip, much like the Classic.

The Sporter is essentially the same rifle without checkering, while the Varmint features a target chambering and a bull barrel without iron sights. They come in .17 HMR, .22 LR and .22 Magnum chambering and use the same detachable seven-round magazine that features a polymer base and stainless steel feed lips. 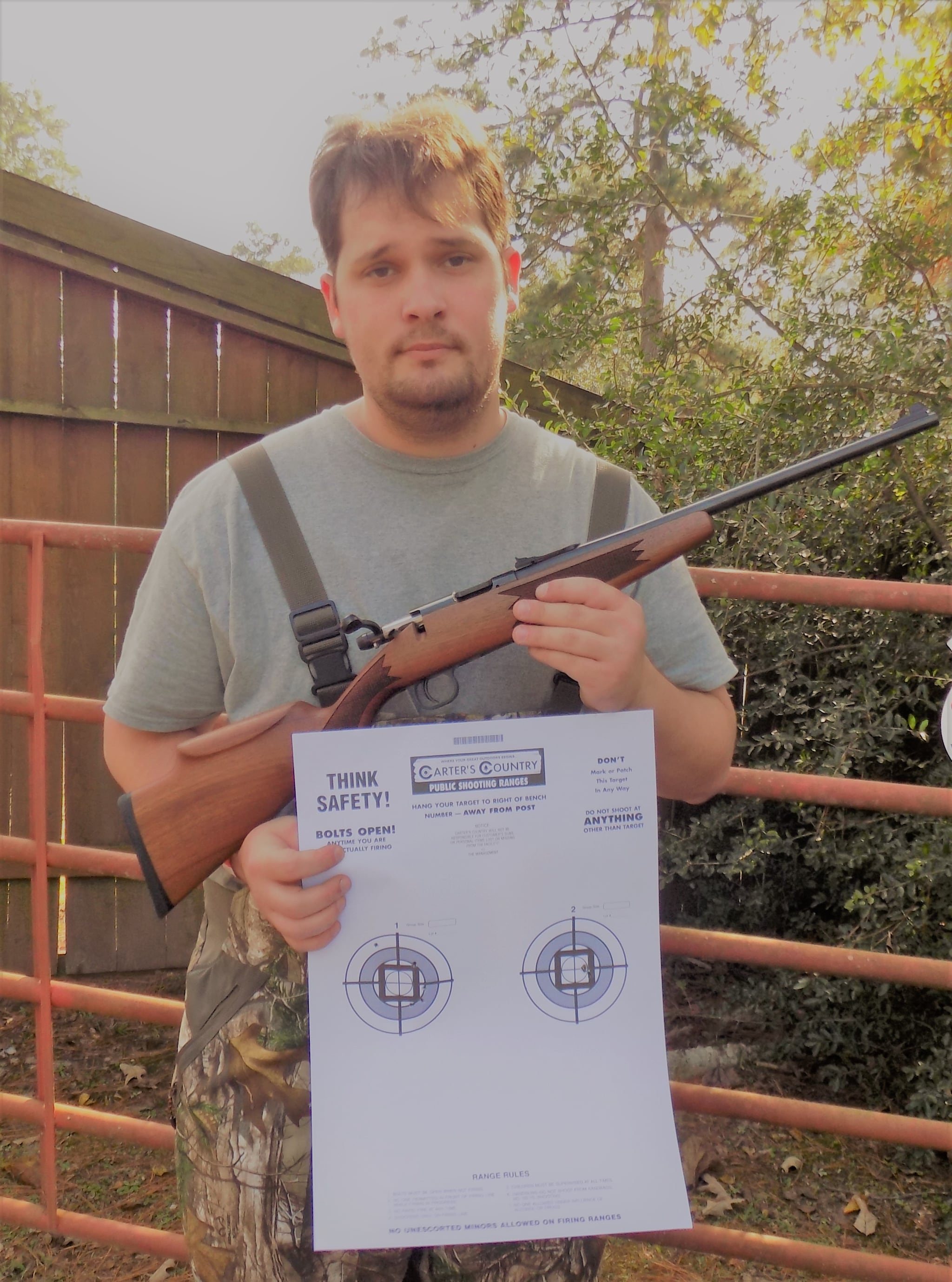 The author showing off some 25 yard groups with the Keystone rifle. (Photo: Terril James Herbert)

The test rifle is a Compact model in .22 LR. The walnut stock is made by Revolution Stocks — a subsidiary of Keystone known for excellent gunstocks.  It is capped by a rubber buttcap and a raised cheek rest as well as the aforementioned aggressive checkering.

The length of pull is generous, at 13 3/4 inches, for comfortable use by full sized adults. The Compact has a shorter 16-inch barrel and uses a single lugged bolt action that features dual extractors.

The rifle is equipped with a set of relatively run of the mill iron sights — a square notch rear sight and a blade front. The rifle is tapped for the use of a proprietary scope mount and the magazines lock in via spring steel clips inside the magazine well that Keystone calls a snap-lock.

Breaking the gun down at home is easy by removing the bolts opposite of the action in the stock. The bolt is not meant to be fully taken apart, but can be removed from the rifle by pressing the bolt release and giving the bolt a yank to free it.

With .22 LR ammo becoming more readily available again, I took the opportunity to run the 722 for a 300-round battery of accuracy tests with the strict use of iron sights. I elected to use CCI Stinger 32 grain hollow-point hypervelocity ammunition as a simulate for use on larger varmints, as well as Federal HV Target 40 grain solid lead ammunition to try to get the best accuracy.

I also selected the popular bulk offering, Remington’s Golden Bullet, which uses a 40 grain plated lead bullet. It must be noted that the longer Stingers will not chamber in the Varmint model, which features a standard Target chamber. The rifles are guaranteed to shoot MOA, so needless to say I was curious to test that. 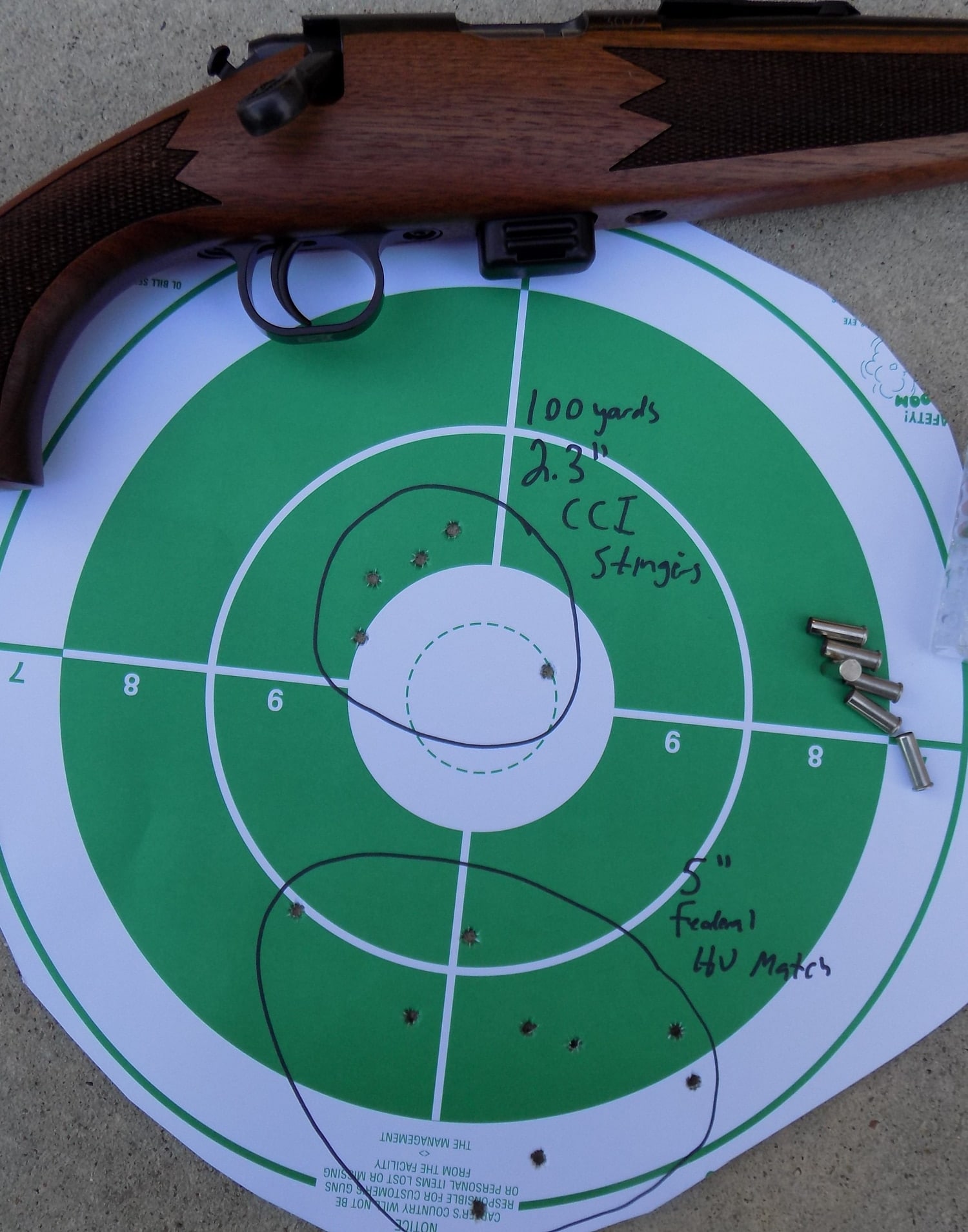 The limitations of 722’s iron sights become apparent at 100 yards. The low velocity 22 LR ammunition starts to drop at this distance as well, therefore the hypervelocity CCI Stingers did a better job at this distance. (Photo: Terril James Hebert)

My efforts with the 722 took two range sessions in total. The tests started at a sight in distance of 25 yards. All rounds produced acceptable accuracy, but the Federal managed a .32 inch group –one ragged hole — at that distance.

Moving on to 50 yards, the iron sights reached their limit to see and hit small four inch black/grey paper squares. I managed 2-3 inch groups throughout the sessions, though I was able to eek out a 1.5 inch group using the Federal ammunition.

I had no choice but to go for a larger 12-inch target at 100 yards. At that distance, the drop of .22 LR round is evident and the front blade sight covers about half the target. With its extra velocity, the CCI Stingers performed the best with a 2.3 inch group. Five inches was more typical, but still excellent with an iron sighted .22.

Coming away from my test, I got the impression that the 722 is really a target rifle masquerading as a fun plinker. I blame the great accuracy to the good stock construction, from the sure grip afforded by the checkering to the fact that the cheek rest allows for shooting from an instinctive position with the iron sights lining with the eye immediately.

Shooting left-handed without the use of the cheek-rest posed no problems either. The buttstock is more than long enough for large adults, but smaller statured shooters had little issue shouldering and firing the rifle too. But this rifle will never be classified for smaller sized children, like the famous Crickett rifle. But what good is comfortable shooting and accuracy if the rifle is not reliable? 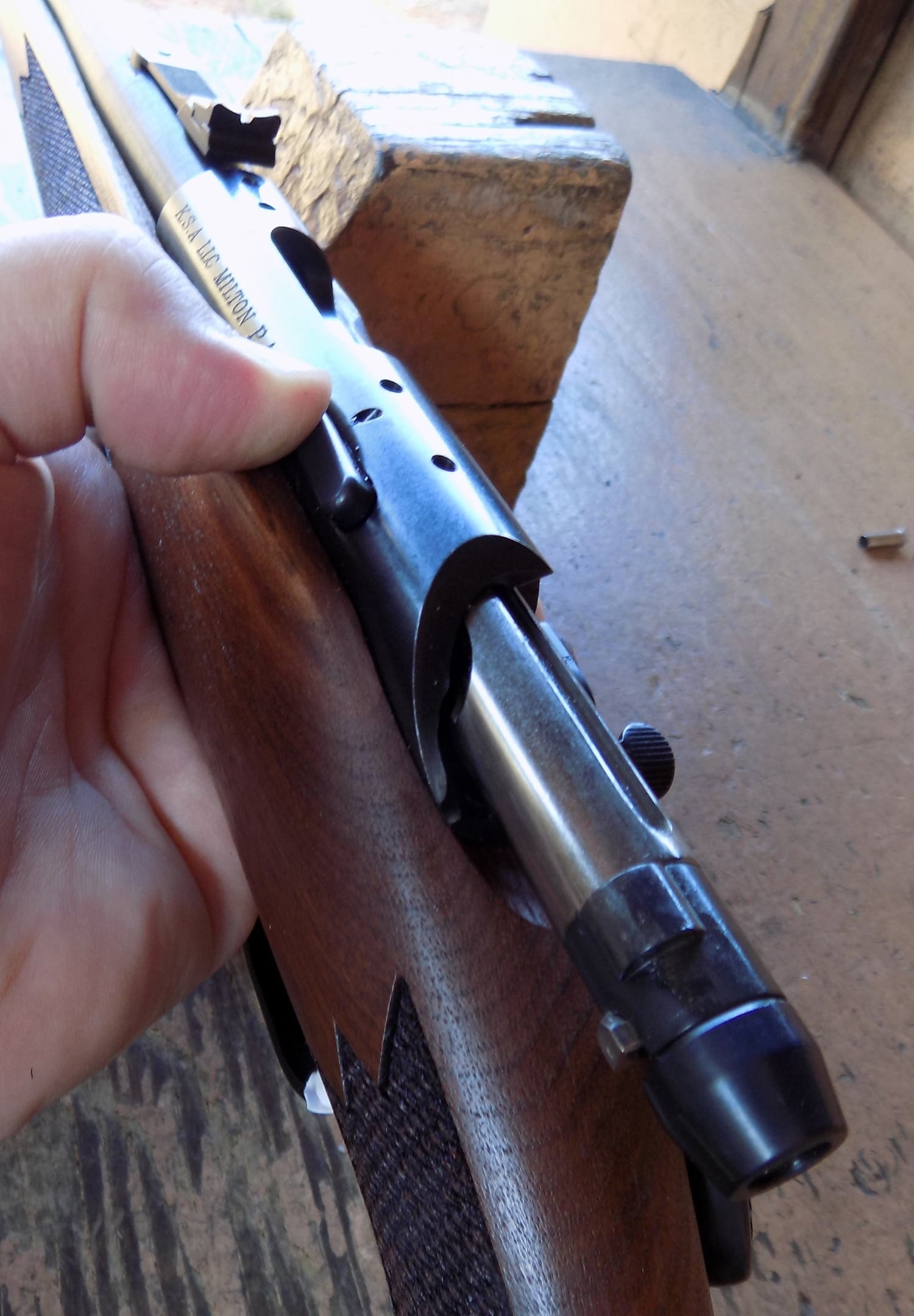 The bolt is released via a push button on the left side of the action. (Photo: Terril James Hebert)

Out of the 300 rounds fired, only two rounds failed to fire on the first strike. The cheap Remington Golden Bullets were the culprit, but in general, rim-fire ammunition will sometimes have problems.

Loading the magazines was a butter-smooth proposition. The feed lips have no sharp edges and the springs are not harsh to push down at all. Inserting the magazines took little effort. Simply push the magazine into its well until it clicks into place. Then rack the bolt back and forward again to chamber the round.

The action is cock on opening, so it takes a little effort when lifting the bolt up in order to run it back, but is relatively easy to work with some final force needed against the extractors in order to fully seat the bolt. The action is not the smoothest and I found that the working the gun half-heartedly resulted in a few double feed jams in my initial trial run. Deliberately running the action eliminated the issue.

My only complaint about the rifle is at its heart: the magazine. The snap-lock magazines are a great idea, but I believe the magazines should be made from stamped steel, not polymer. During my test, I noticed a little too much play between the feed lips and the polymer bases than I would like to have seen. However, this had no impact on the immediate test. 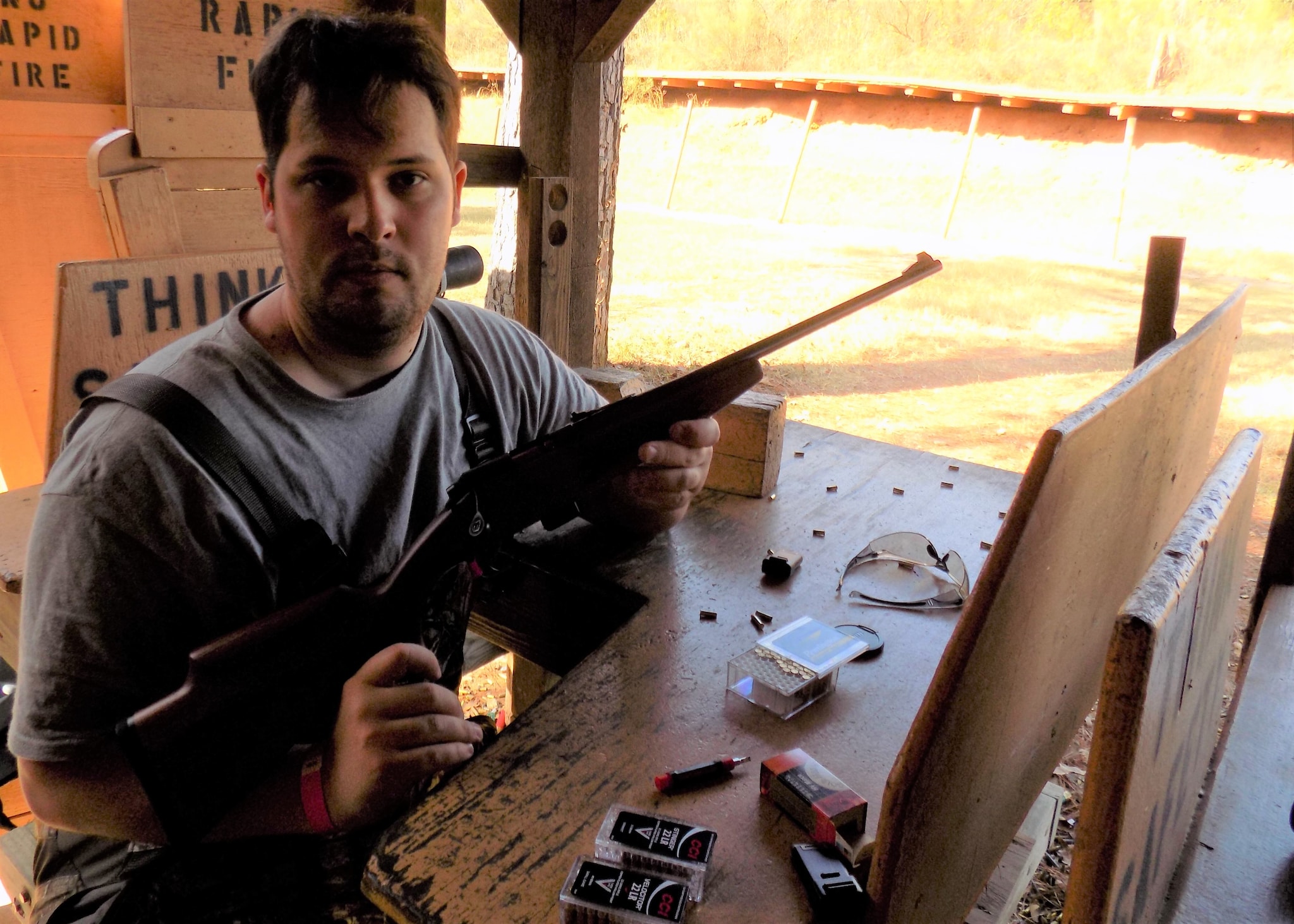 The Keystone Model 722 is a handy rifle, but it still retains a full length buttstock which allows adults to fire the weapon comfortably. (Photo: Terril James Hebert)

Even though I am not the biggest fan of the magazines, I believe the 722 is a great value, despite being in a flooded market filled with dedicated fan bases and tons of aftermarket parts for the most popular guns.

While the Keystone Arms Cricket and Chipmunk are popular, the jury is still out on the new 722. What the 722 does have over a lot of 22s coming to market is build quality. It is hard to get an accurate 22 rifle that comes with an excellent wood stock and milled steel parts in this era of cheap polymer and stamped sights.

Despite the construction, the rifle is still handy, at 4.5 pounds, and is easy to use and easy to shoot well, even without an optic. At $300, it is not the cheapest .22 rifle in the world, but it is a relatively small price to pay for attention to detail and a rifle you can almost hunt with, right out of the box.