I’ll be the first to admit that when I got my hands on my Knights Armament Company SR-15 for the first time I was almost a complete novice when it came to the AR family of rifles. I’d shot them, I owned a second hand DPMS AR and I knew enough to fix a malfunction. I knew that Knights made great rifles, but to say that I really understood what set this new rifle of mine apart would be a bit of a stretch. But over the course of the last eight years and an undetermined number of rounds through ARs of all make, model and caliber, I have come to understand exactly what makes this rifle stand out among others. After roughly 10,000 rounds this rifle has performed with perfect reliability. Almost a decade later it still runs like a Formula 1 car.

The SR-15 is the work of C. Reed Knight and renowned arms designer Eugene Stoner, hence the designation SR for “Stoner Rifle.” Following in the footsteps of the highly successful SR-25, Knights looked to the AR-15 and made a number of design improvements that give the SR-15 it’s reliability and excellent handling characteristics. The Upper Receiver Extending (URX) Rail System is locked into place with a proprietary barrel nut that lines up the upper receiver and rail system and makes the two-piece rail as rigid as a monolithic one. This still allows the fore-end to be replaced if desired or damaged.The lower receiver has ambidextrous controls, extended feed ramps, a two-stage match trigger and an enlarged trigger guard.

Especially unique is the bolt. Instead of the normal rectangular shaped lugs, the Knights bolt used lugs rounded on both the top and bottom. The same design is used in the corresponding lugs of the barrel extension. This reduces stress on the lugs and greatly reduced the chances of them breaking. The cam pin is also smaller in diameter and allows the bolt walls to be thicker adding to it’s robust reliability.  Another advancement is the dual spring extractor. The “E3” extractor is wider at the base so it can house two springs helping the front portion and keep it from sliding off of the cartridge rim as the bolt rotates. 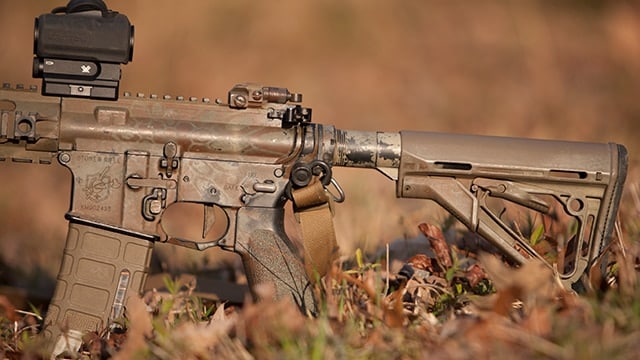 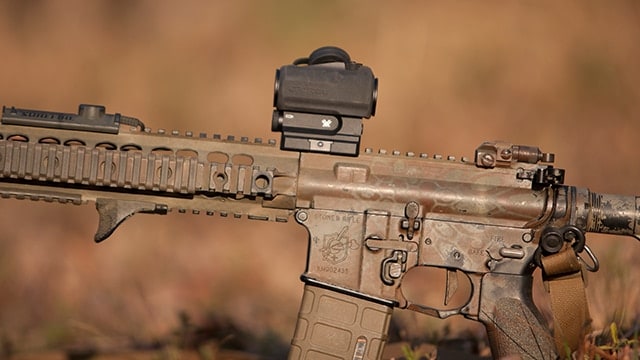 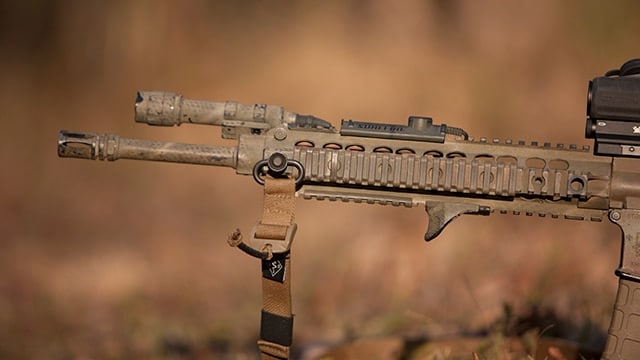 The stock, receivers, and fore-end of the rifle (Photo: Recom Actual)

The Rifle shipped with pop up iron sights, the front sight is integrated into the fore-end, two magazines, SOPMOD buttstock and owners manual all encased in a Flambeau case. The quality control on these rifles is great. The machining is superb, the anodizing even and dark, even the logo is cool. All in all it was a great rifle right out of the box with no performance enhancing modifications needed to go straight into action. Over the course of its life I have made a few changes and additions to the rifle but overall it’s mostly stock. With the technical stuff out of the way let’s get into what makes this rifle such a blast to shoot.

We’ll start with my aftermarket additions. When I first got the rifle I added a Surefire Scout light and left it alone for a while. After learning to shoot it with just the irons, I added a Trijicon ACOG to start stretching the range out a bit to see what the rifle was capable of doing. This is where it really started to shine and push me to be a better rifleman. I’m currently running a Vortex SPARC AR red dot sight and find it to be a great performer on the rifle.I replaced the SOPMOD stock with a Magpul MOE stock, swapped the grip for a BCM Gunfighter one because I liked the angle better than that of the original A2 grip and changed out the stock charging handle with a BCM version.

I’ve replaced the factory trigger with a Geissele two-stage, flat faced match trigger since I bought the rifle but the original was smooth and crisp breaking without any of the gritty feeling or clunkiness you sometimes find in a stock AR trigger. That’s because, as with everything Knights produces, they went a bit above average and outfitted the rifle with a 4.5-pound nickel coated two-stage trigger. I added a pressure switch to the Scout light about a year ago to aid in using it ambidextrously and after about two years of owning it I did a custom paint job on the rifle. I know that might sound like a lot of changes but other than the trigger and charging handle the guts of the rifle are all stock. Original barrel too, and even after all this time and all those rounds it’s not shot out and still easily holds 1 MOA groups from a good solid bench rest. 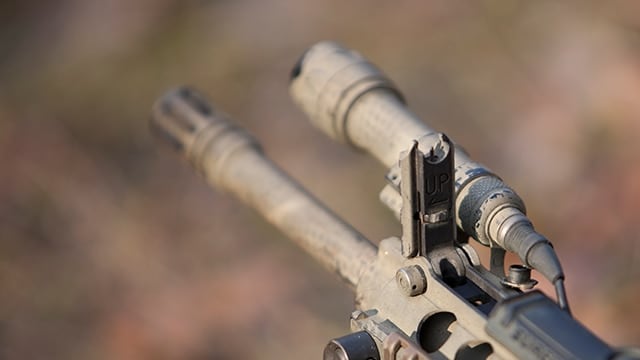 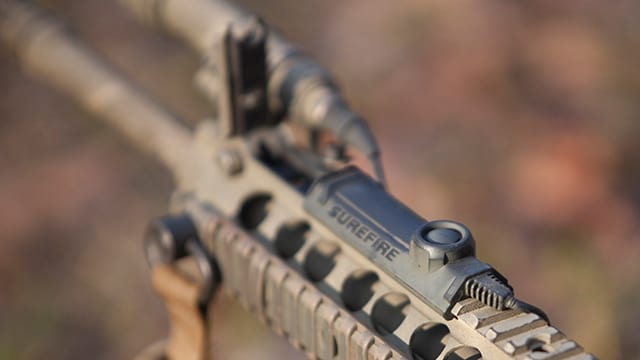 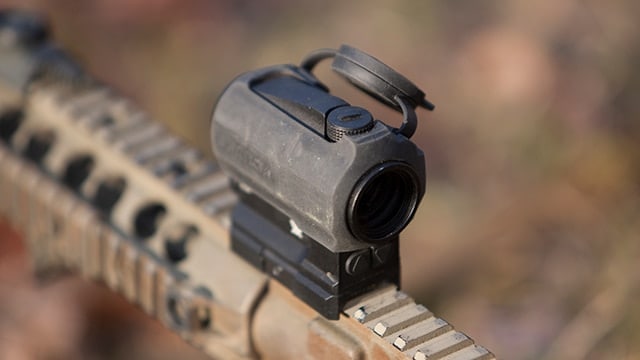 This rifle really starts to shine once you add some after market accessories to it (Photo: Recom Actual)

The stock weight of the rifle is 6.6 pounds and it is quite well balanced. Actually with the exception of some bull pups I’ve shot this is just about the best balanced rifle I’ve come across. The balance and lightweight make target transitions smooth and fast. It’s a remarkably flat shooting gun and while that’s not shocking in most AR’s chambered in 5.56, it’s still worth mentioning. And bear in mind that I’m still using the original A2-style flash hider not a snazzy compensator. I’ve shot my brothers SR-15 with a variety of comps on it and while there was a bit of improvement, to my mind it’s never been worth the trade of in noise or muzzle flash. The felt recoil is light as well, even for a 5.56 gun, on par with a AK chambered in 5.45.

For eight years I’ve fed this rifle everything from Wolf steel cased to Prvi Partizan, Silver Bear, Remington, Freedom Munition, ZQI, Hornady, basically anything I could afford at the time, in bullet weights from 55- to 75-grain T.A.P. and it has eaten it all with so few problems that they don’t really warrant mentioning. In fact I cannot think of a single malfunction that wasn’t related to ammo defects or user error. I’ve kept the rifle relatively clean and normally lube the friction points before a range trip or class, but honestly it’s normally a dirty girl and she seems to like it that way.

While I haven’t purposely beaten the rifle up, I haven’t babied it at all. It’s been dropped, wet, muddy, run until the handguard got a bit uncomfortably hot, with the aforementioned crazy diet of ammo and it has been a freakin’ rockstar. On a solid bench rest with quality ammo it is still a sub MOA gun, and even moving in the hands of this less than stellar shooter it holds very impressive groups when I bother to use proper fundamentals. I’m still probably not shooting this rifle up to its full potential. With a Red Dot Sight it’s no trouble at all to make first round hits out to 200 yards in around one second from a low ready position. The excellent balance of the rifle make target transitions smooth and easy. 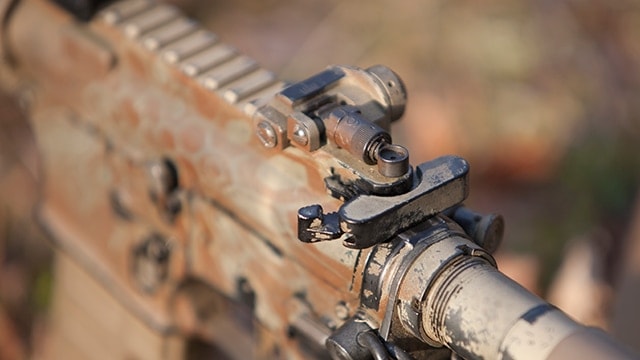 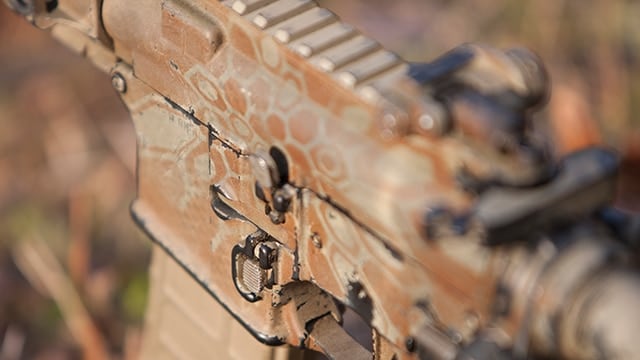 Another thing that makes this rifle shine is its versatility. It has been my home defense gun since I took it out of the box and slapped a light on it. And even though its a full sized rifle, it is quite at home solving CQB problems. While this rifle has mainly been used in classes and on the range, it saw quite a bit of use as a varmint rifle. Equipped with a Trijicon ACOG it was no problem to get accurate shots on ground hogs and coyotes out to several hundred yards regardless of the time of day or weather conditions. As I said before, the rifle pushed me to become a better shooter and everytime I stepped my game up it showed that it was capable of more.

As I mentioned before I’ve put a rather erratic diet of ammunition through this rifle and it has held up better than expected. At about 3,000 rounds I decided to test just how durable this rifle was, so from 3,000 to almost 8,000 rounds I didn’t clean it at all. Just kept it well lubed and let it go. The resulting gunk build up was pretty impressive but what was even more impressive was that my SR-15 just kept chugging along. No problems whatsoever. I mixed and matched ammo, left it lying on the ground outside overnight in less than ideal weather and once, accidentally, dropped it out of a truck and into a creek on a coyote hunt. Still, not a single hiccup. After 5,000 rounds of abuse I gave up trying to break the rifle and gave it a well deserved soak in a solvent bath. So as far as durability and reliability go it gets a solid thumbs up from me. 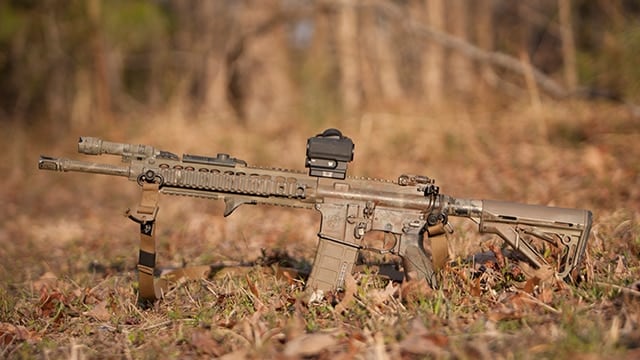 The higher price point is worth to shoot such a sweet gun (Photo: Recom Actual)

So why is it worth the not inconsiderable price tag Knights has on it? And what is my overall impression of the KAC Sr-15 after almost a decade? Well first let’s talk about why I feel that it’s worth every penny of its price. I’m a big proponent of the “buy once, cry once” mentality. So I tend to look at gear and equipment purchases through that lense. With its long list of extra and improved features like ambidextrous controls, high quality BUIS, improved bolt, great trigger, proven reliability etc. the rifle is well worth the cost. You’d put in hundreds of dollars bringing most AR’s up to the SR-15’s standard anyway, so why not get it all at once from one source? After the beatings I’ve put this rifle through I can tell you that I’ve more than gotten my money out of it, and it shows no signs of wearing out anytime soon.