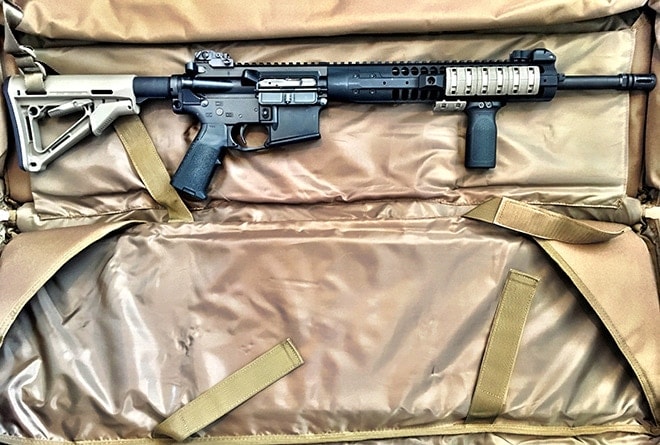 My LWRC M6-SPR gas impingement rifle. I bought this to compare to the direct-impingement M16A4 I used in the Marine Corp. (Photo: James Miller)

In recent years, the market for gas-piston operated rifles and carbines has expanded rapidly with the demand for a cleaner operating, more reliable rifle possessing the beloved characteristics of the classic AR-15 platform. The Land Warfare Resources Corporation (LWRC) developed their M6 line of rifles—powered by their proprietary short-stroke piston system—to meet this demand.

LWRC employs some impressive technology in their products, such as NiCorr surface conversion on their barrels and nickel-alloy coating on their bolt carriers. The M6 (recently relabeled as IC for “Individual Carbine”) offers a very complete set of features in a package that claims to be an improvement on the reputable AR-15 system.

After exiting the Marine Corps in 2007, the idea of purchasing a piston rifle was attractive to me because I’d spent a ridiculous amount of time cleaning my direct-impingement M16A4, and it still malfunctioned on occasion. An AR-15-type rifle that required very little cleaning and was also more reliable seemed too good to be true. After a fair bit of research, I settled on the M6-SPR as my first foray into the gas-piston market.

Upon initial inspection, the M6-SPR feels very solidly built. The upper and lower receiver fit together very snugly, with little or no play once the takedown pins are seated. The various controls of the rifle also feel very precisely fitted. The fire-selector (which has a marking for full-auto even though my civilian model is only semi-auto) ticks between safe and fire very crisply with a clean audible click, and with enough resistance that it seems unlikely that the rifle might be incidentally switched to fire while slung. Both my USGI magazines and my MAGPUL PMAGs insert and release from the magazine well cleanly, and the magazine release is easy to actuate, even with a full mag putting pressure on the magazine catch. 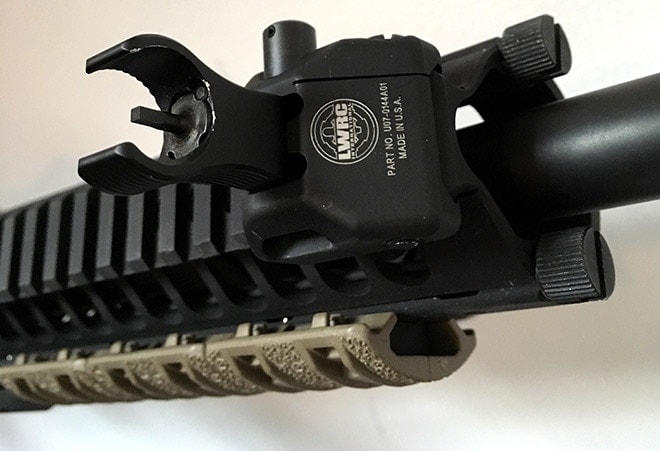 The flip-up sights are nearly identical to the Troy Industries folding battle sights in my experience. (Photo: James Miller)

The included flip-up sights are nearly identical to the Troy Industries folding battle sights, but are stamped with the LWRC logo. Though the sights lack the adjustability of full sized A2 sights, they are plenty adequate for the shooter who plans to use them as a backup to an optic. One of the most notable aspects of the M6-SPR is the free-float tube. The hand guard is incredibly rigid, and is mounted to the upper with six screws near the barrel nut. The tube is entirely customizable, with fixed rails only along the top of the rifle. The rest of the forend is lined with screw holes where one can attach sections of rail wherever they wish to add an accessory. Some may prefer having complete rails so that they can attach rail covers for added grip, and LWRC offers a rail completion kit for those who want total rails.

Lastly, the finishing powder coat of the rifle is very durable. Being left-handed and carrying my rifle with a two point sling, the finish on my weapons tends to get worn off on places like the brass deflector, forward assist, and charging handle where the rifle tends to rub against my gear. After running the rifle for about a thousand rounds in a couple of carbine courses, the finish on the M6-SPR shows very few signs of wear.

As I stated before, the controls of the M6-SPR are very precisely fitted, and this is a strong point of the gun in terms of ergonomics because none of the controls bind or stick, so the rifle functions easily during weapon manipulations under stress and one-handed. Magazines almost never need to be flipped or pulled from the magazine well. The charging handle has a very large, easy to grip tab, which is nice for lefties, like myself, who need to cant the rifle, and reach over to charge it with the non-firing hand. 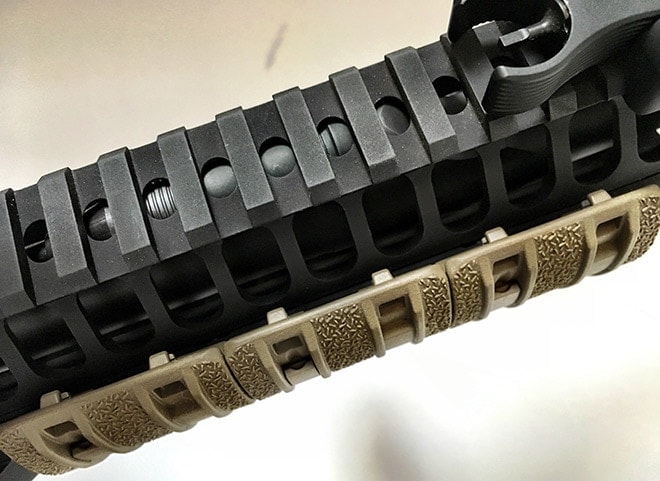 Detail of rail and handguard. Despite heavy firing and a hot barrel, the handguard never heated up so much I couldn’t hold it barehanded. (Photo: James Miller)

The rifle I purchased came with a MAGPUL ACS stock. For me at least, this was a weakness in the comfort of the rifle. The battery tubes on the stock made it too wide to be comfortable for me because the stock dug into my collarbone, or the ball of my shoulder joint, and made getting the rifle parallel with my line of sight difficult. It is an easy fix, and I ended up replacing the stock with a standard MAGPUL carbine stock. But it might be wise to shoulder the rifle a few times before you buy, just to make sure you know if the stock is going to work for you.

While on the topic of comfort, I should mention the pistol grip. The M6-SPR comes with a military style grip that has a single finger notch below the trigger guard. For most, this will likely not be a problem, but I have smaller hands. When I get a good, high firing grip on the rifle, my middle finger rests squarely over the nub of the finger notch, which is not that comfortable. The grip is tolerable enough that I haven’t replaced it yet, but this is another thing to get a feel for while you are checking out the rifle in the store.

Lastly, the trigger guard is nicely rounded, which allows easy access to the bang-switch, even with gloves on, and is especially handy during rapid presentation drills where the shooter is quickly removing his finger from the trigger and replacing it.

Overall, the rifle feels very good, and replacing the furniture would easily solve my ergonomic issues.

I will say this up front: this gun runs very well. Some people warned me that the gas-piston system was a more violent system than direct-impingement, which could cause some rattle in the recoil. If this is true, I couldn’t tell. In short-range rapid-fire and long-range slow-fire, the rifle performed equally well. So far, there have been no malfunctions that weren’t some sort of operator error. It may be too early to say, but the gas-piston hype might be real.

The trigger can make or break a rifle for some people, and LWRC clearly put the time in to make sure they got this right. The trigger was crisp and consistent, with a very nice audible and tactile reset, and no play whatsoever. The trigger felt great both when pressing in short range drills, and when slowly squeezing for long-range marksmanship. I had no trouble dinging 12 inch steel at five hundred yards. The pull felt maybe a pound or two lighter than the M16A4 trigger, but that could be because it is a nicer trigger overall. 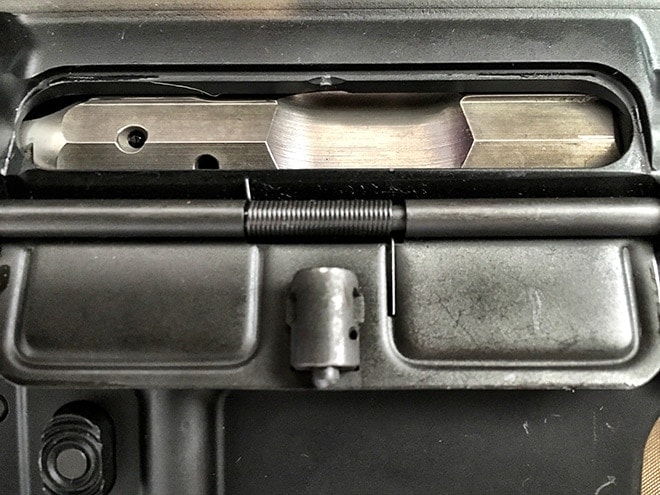 So far, after several Combat courses, the gas impingement system has lived up to it’s reputation of running incredibly clean. In fact, I have yet to truly clean it. (Photo: James Miller)

The sights were decent enough, and presented a very usable sight picture. I ended up replacing the rear sight with an A.R.M.S. flip-up sight to add more long-range viability to the iron sights, but the stock sights are perfectly serviceable for short to medium ranges.

Since the gases in a gas-piston system aren’t vented out the ejection port, the gases are vented out the top of the hand guard just behind the front sight. I use a thumb-forward grip, so this was not a problem for me. The hand guard did get warm during rapid fire, and for someone using a C-clamp grip, the gases might vent against their thumb. The hand guard of the rifle never got hot enough that I could not grip it with my bare hand, so this may not be a problem. But if you are looking to convert this rifle to full-auto or do a lot of rapid fire with a C-clamp grip, just be aware that there may be some heat buildup around your hand. So far, I haven’t heard of any issues with semi-automatic variants.

Finally, besides running a few patches through the bore, I haven’t cleaned this rifle yet, and it does not seem to need cleaning. There is no carbon buildup on the bolt carrier group, nor is it gathering in the trigger assembly. LWRC recommends cleaning the gas-piston, which is accessible by removing the top portion of the rail system. However, LWRC claims that this only needs to be done every five thousand rounds. I’ll keep running the gun, but so far it runs clean.

The price tag on an AR-15-type rifle seems to be either the first, or the last thing that people look at. I’ve mentioned it last because this is a really high quality rifle, but it does not come cheap. My particular rifle ran about $2000, and LWRC offers M6 models that go all the way up to $2700.

Another thing to think about when considering a gas-piston rifle is that all the gas-piston systems available are proprietary. Whereas direct-impingement parts are generally interchangeable between manufacturers, if you need to replace something on a gas-piston rifle, you will have to order parts from the manufacturer.

Though it might seem like a steep investment, the M6-SPR has made me happy with my decision to venture into the world of gas-piston rifles.