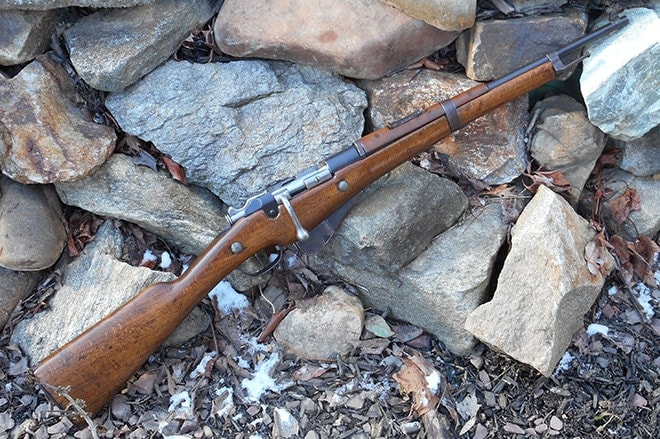 The venerable little French Berthier, chambered in the hard hitting 8mm Lebel, proved it’s worth in the trenches of WWI and subsequent wars. (Photo: Francis Borek)

When the First World War began, most of the warring nations felt that it would be a quick fight. France felt that it was only a matter of time until their armies had re-taken the lost provinces of Alsace and Lorraine. Germany believed that in only a few weeks, their soldiers would once again be marching through the streets of Paris. Belgium felt that a line of thinly manned fortifications could hold back the most modern army in the world. Britain somehow believed that 80,000 soldiers would tip the balance of power in a war of millions.

Very quickly the warring nations learned (more or less) the horrifying reality of modern warfare, and that they were going to be in for long and protracted conflict. Desperate for rifles, the nation of France reached out to her colonies and pulled out a rifle that was never intended to fight on the frontlines of a proper European war. But as this conflict has shown, nothing about it was proper.

There is a distinction that has to be made first. “Colonials” in this story is not a reference to native soldiers from foreign lands. Colonials were Frenchmen who were stationed and fought overseas. Some came from France, others were born to French parents in the colonies. These soldiers had rather colorful names to match their equally colorful attire. Spahis, Zouaves, Tirailleurs, Colonial infanterie, and the famous Legion Etrangere (French Foreign Legion) all were considered to be colonials and grouped together in the Colonial Corps when the war began. 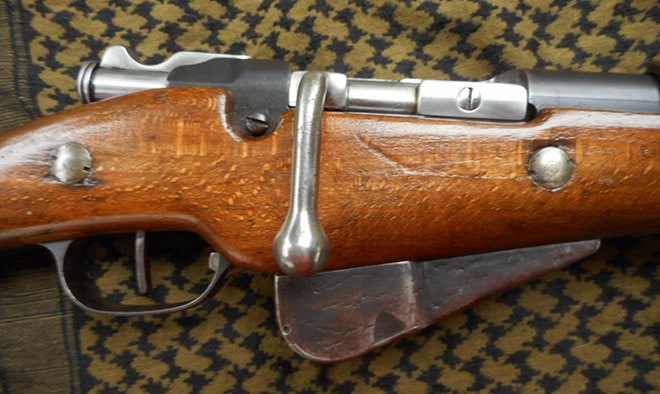 The turned down bolt handle and the screw holding in the bolt head. Keep an eye on that screw. (Photo: Francis Borek)

By the time of World War I, the standard issue French service rifle was the Mle. 1886 Lebel. It was big, heavy, held nine rounds and was the first weapon to use smokeless powder cartridges. It was also awkward to load, and the balance shifted while firing. The Lebel also could not be easily scaled down to a carbine length for cavalry and smaller statured native troops in French Indochina who had issues with its length and weight. French leaders were also leery of arming the colonial soldiers with Lebels for a variety of reasons, mostly financial.

The response was a rifle design that fed from a three-round Mannlicher clip called the Berthier. Cavalry adopted a compact Berthier carbine, while the Cuirassers adopted a carbine with an odd stock comb to allow them to shoot wearing their outdated steel cuirasses. The Indochinois rifle variant received quite a bit of praise for it’s handling characteristics despite only having three shots. Soon a variant for native troops in Senegal was also adopted and dubbed the Senegalese or Mle. 1907. Eventually most colonial and native troops would be armed with Berthiers. They were cheaper, lighter, and well liked by users.

When the French army started to desperately need rifles — and learned how time consuming the Lebel was to produce — they reached for the Berthier. Modifying the design of the Senegalese variant to take a Lebel bayonet, it was dubbed the Mle. 07-15. Discovering that even the Mle. 07-15 was a little too long for trench warfare, the French army modified the design of the Berthier carbine and dubbed it the Mle. Mousqueton 16, finally adding a five-round magazine.

The M.16 was intended to be the standard production Berthier model. Despite this, the French wound up cobbling together the majority of their Berthier rifles during rebuilds due to an excess in parts. It is entirely possibly to find a Mle. 07-15 marked as a Mle. M.16 and vice-versa. The five-round magazine was also a rarity in the trenches, and the three-round variant was far more common. Despite this, the clips are interchangeable between three- and five-round magazines. Though a five-round clip jutting out of the bottom of a three-round magazine looks a bit odd. 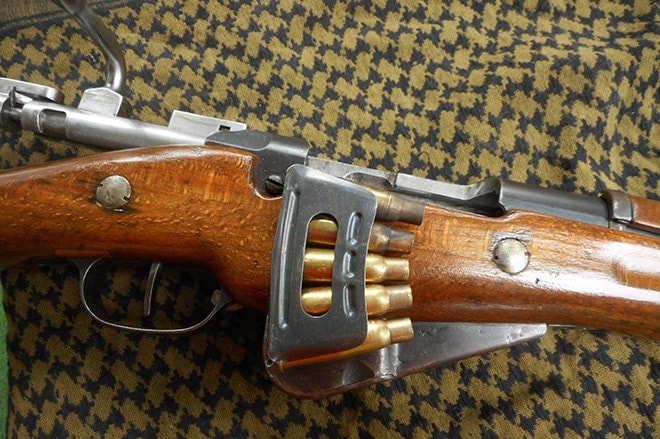 Close up of the Mannlicher clip and the extreme angle on which the cartridges rest upon each other. (Photo: Francis Borek)

Pick up a Berthier M.16 for the first time, you’ll discover it’s a featherweight compared to other rifles of the era. In fact, the M.16 is lighter than many of the AR-15 rifles on the market these days.

The stock has a straight wrist and is cut short with a steel buttplate. The rear of the stock features a cutout and sling bar to match up with a ring at the front of the rifle. My stock in particular features no less than seven repairs and also lacks any sort of grasping grooves. The stock appears to be varnished, although it is possible that so many poilus (infantrymen) over the years rubbed down the stock with gun oil. Now that oil has hardened into a varnish.

The bolt handle is angled 90 degrees downwards, though there isn’t much space between the stock and the handle. The magazine juts out of the rifle at a harsh angle to accommodate the 8mm Lebel’s rim and taper. There is a spring loaded dust cover at the bottom of the magazine where the spent clips fall out of the rifle. If the cover is closed, the clip will rest freely at the bottom of the magazine until a new clip is inserted which will push the old one out. 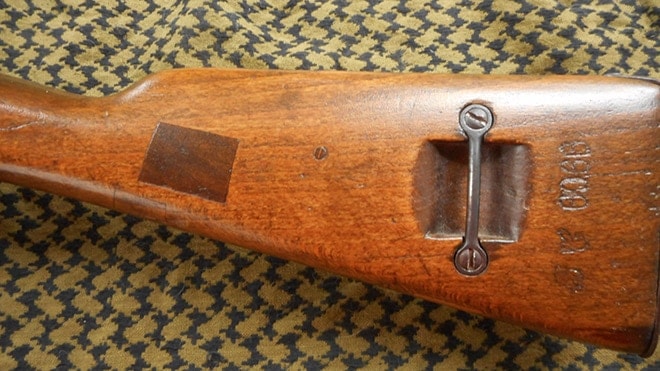 The stock shows it’s age with all of the repairs. (Photo: Francis Borek)

Beyond taking the bolt out of the rifle, French soldiers were not expected to fully strip their weapon. The screws require a two-prong screwdriver which were only issued to armorers. To remove the bolt, unscrew the large screw in the bolt while it is partially retracted. Now remove the bolt head and the rest of the bolt can be removed without incident. The screw can come loose under repeated firing, so keep an eye on it.

The Mle. M.16 Berthier is a promisingly handy little rifle right up until you fire it and discover just how hard it recoils. Though the short length and light weight makes it a fine rifle to carry, it doesn’t translate to being a soft shooting rifle. In kind, the Mle. M.16 doesn’t so much shoot as it roars like an angry beast.

The sights are a bit odd. The rear sight features a very wide square notch while the front sight is a big, fat square post. Sitting on top of that post is a tiny notch. The post is meant for combat shooting, while the notch is meant for precision aiming should the need ever arise. In practical use however, the notch is basically useless. Firing from the standing position at 100 yards, the Mle. M.16 pulled in a reasonable five-inch group with handloaded ammunition. It’s certainly not to the standards we demand today, but it was good enough back then. As mentioned recoil is quite harsh, and I feel some sympathy for those who were forced to fire these from the prone position.

The useless notch on the front sight and the stacking hook. (Photo: Francis Borek)

The Mle. M.16 is a bit of an odd duck. She is a little awkward to handle, ammunition is tough to find and the en bloc clips are expensive. Yet even today, she could make an excellent little brush gun or truck gun. The 8mm Lebel hits hard, and the rifle is light enough to be carried anywhere you need it. The en bloc clips load quickly and smoothly, and the sights are quite robust.

Prices can vary wildly. This rifle was purchased for $189, either because the owner of the store didn’t care about French rifles or felt the rifle was probably refinished. Berthiers in nicer condition can often fetch higher prices, especially now that we are in the centenary of the First World War.

The Berthier’s career was remarkably long lived, serving in almost every war that involved a European nation until after World War Two. She’s not the fastest, nor the prettiest, but the Berthier did job when she was called upon to do so. You can’t ask much more than that.