The title of “brush gun” is not one bestowed upon any but the handiest of carbines. Whether made to brush gun specs to fill a market niche, or reconfigured from an existing service or stock hunting rifle, such guns are typically short in length, powerful enough to reliably take down medium-to-large sized game and rugged enough to be tossed behind a truck seat. Few rifles fill this niche more admirably than the Mosin-Nagant M44, a carbine-length warhorse of sturdy construction that fires the venerable 7.62x54R cartridge. 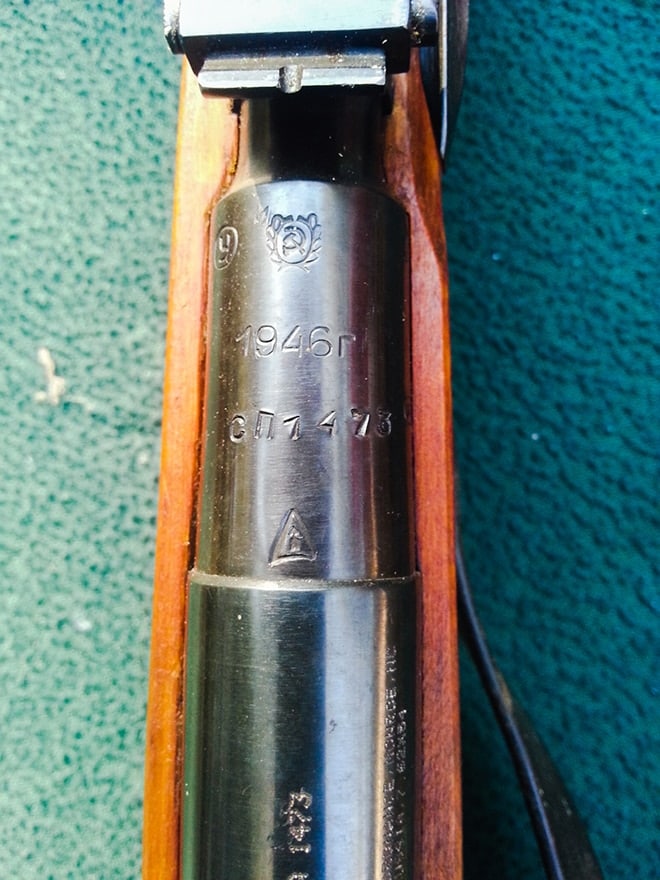 Mosin-Nagant M44 arsenal markings. The hammer and sickle indicates this example was made at Izhvesk armory. (Photo: Evan Duffy)

The Mosin-Nagant M44 carbine is a derivative of Russia’s battle-tested 91/30 rifle, as the latter saw service in the hands of the Russian military from the 1890s through the Second World War. Through the gut-wrenching street-to-street urban combat of Stalingrad and other Soviet battles, the leadership saw the evolution of the battlefield from wide-open country to more confined city quarters, and as a result, recognized a need to adapt the primary service weapon to a shorter, handier platform.

Such was the genesis of the M44, which was developed in late 1943 to fit this specific need. Patterned after the existing M38 carbine but with the addition of a side-folding bayonet, the M44 was the first Russian carbine designed not for distribution to specialty/rear-echelon troops only, but to front line troops as well.

Production of the M44 took place at both the Izhvesk and Tula armories (Tulas are stamped with a star on the receiver, Izhvesk guns feature the Soviet crest), though most of the rifles were manufactured at the former armory. Because of the re-utilization of resources at the end of the war, M44’s can be found with hardwood or laminate stocks, and with hexagonal or round receivers.

The primary differences between the M44 and its predecessor the 91/30 are the length of the barrel and the presence of the permanently mounted bayonet on the M44. While the 91/30 is considered a behemoth by modern rifle standards (51.5 inches in overall length, 31.5 inch barrel, 8.75 pounds), the M44 is substantially shorter (40 inches in overall length, 20.25 inch barrel, 9.0 pounds). The extra heft on the shorter rifle is mainly due to the presence of the side-folding 15 inch cruciform bayonet, but the additional weight on the front end helps control the substantial recoil of the short rifle.

The M44 fires the world’s oldest service cartridge still in use, specifically the 7.62x54R round (the “R” stands not for “Russian” but rather for “rimmed.”) The round is powerful enough to easily take medium-to-large game, including large bears. While most service rounds weigh in at 181 grains, heavier, soft-nosed rounds for hunting are currently being manufactured at 203 grains.

The test rifle was a “1946” stamped Izhvesk round-receiver rifle with a hardwood stock and matching serial numbers. Similar rifles in “arsenal” condition can be had for under $250, and one must simply cleanse the weapon of the considerable cosmoline before bringing to bear a nice-looking, handy brush gun.

The bluing and wood-working was typical of wartime Soviet production: the rifle won’t win any beauty contests, but as a weapon designed for heavy use, the fit-and-finish is more than adequate. The barrel is chrome-lined, and the rifle has a shortened (compared to the 91/30’s 2,000 meter sight) leaf sight graduated from 100 to 1000 meters.

The action of the M44 will be familiar for those accustomed to shooting Mausers of various designations, as the bolt angle is the same 90 degrees. The M44 action is as slick as silk, as the test rifle didn’t have any burrs or rough spots in the action. Chambering rounds is smooth, and with a little practice, the firing rate of 10 rounds per minute would be easy to attain (with strippers, of course, as the rifle features a five round, non-removable box magazine.)

The short barrel makes the gun quick to the shoulder, and at the range, knocking down bowling pins at 100 yards over iron sights was routine. The gun would make an ideal “hog rifle,” as the hunter can get the weapon in play quickly, and the sights are intuitive and easy to “eyeball” under pressure.

The recoil for the rifle is somewhat of an issue, however, as the gun kicks like a Russian mule. The cartridge was designed for a rifle with a much longer barrel, and when fired through the shorter M44, the recoil is sharp and substantial.

Regarding ballistics, one can expect terminal performance similar to that of a .308 rifle. While not quite as powerful as its American counterpart, the .30-06, the 7.62x54R round fired through the M44 has more than enough power to knock down North American game with confidence. The rifle also grouped well, posting several three shot spreads of under 1.5 inches at 100 yards, and 3.5 inches at 300 yards.

If one is looking for a handy, quick-shouldering, powerful weapon for brush hunting or truck duty, the Mosin-Nagant M44 is an excellent value for the $250 price tag. It’s durable, powerful and affordable, and is a prototypical example of the “brush gun” category of carbine rifles.