In a few short years, the .204 Ruger round has exploded in popularity and for good reason.  Critters take notice anytime a .204 hits the bench, and now Mossberg has chambered their popular MVP Varmint rifle line in the venerable little .204. Will it make you shoot like an MVP in the field? 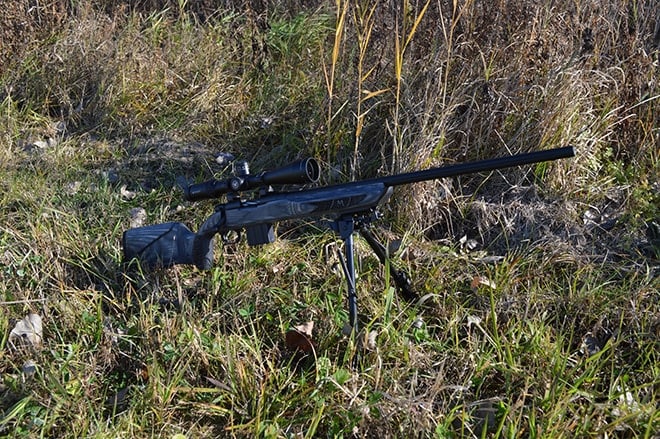 The .204 MVP, springing from Mossberg’s initial line of both Varmint and Predator rifles, is built for the long-range varmint hunter and target shooter.  The bolt action rifle holds ten rounds in the magazine plus one in the chamber.  Though Mossberg labels the 24 inch barrel as “Medium bull,” the fluted tube is plenty heavy — resembling most companies target or bull barrels — has a 1:12 twist and is free-floated.  The two tone spiralized bolt sets the MVP apart in looks and is matched with its smooth action, no doubt a precursor to the successful Patriot line of rifles. 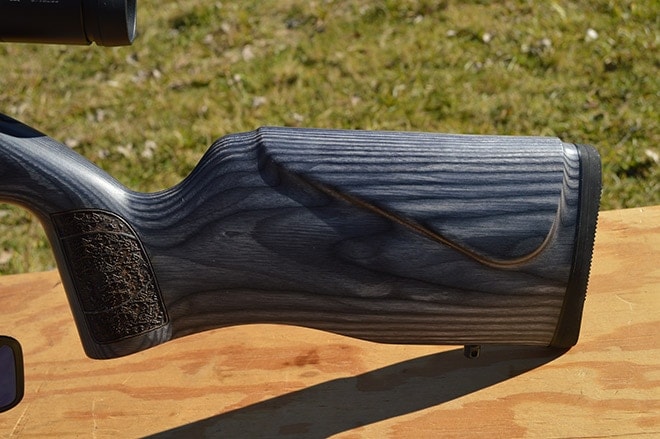 Stocks on the MVP are grey laminate with lighter undertones, Mossberg “M” branded stippling, and a sleek matte finish.  Stock design is ideal for bench rest shooting with its buttstock shape and wide, flat forend for resting.  Included sling swivels make a ready attachment for bipods as well.  The 13.25” LOP is user friendly on a rest or shooting prone.  Weighing in at 7.75 pounds with an empty mag and no optic and 43 inches long, this is not a rifle to carry around all day, but recoil is completely non-existent making it a joy on target. 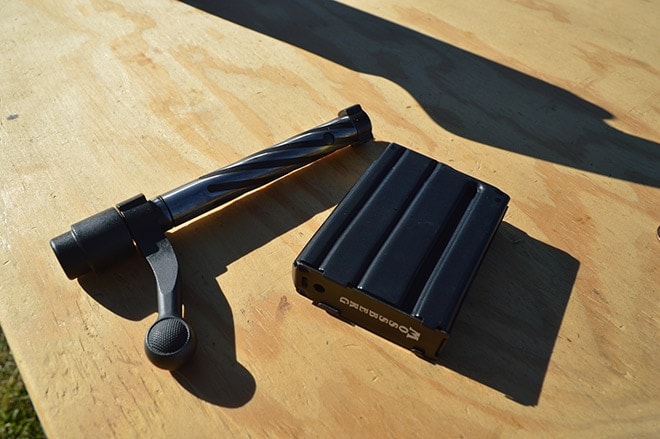 Metalwork is all matte blued with a checkered bolt handle.  There’s also Mossberg’s now-standard lightning bolt action (LBA) user-adjustable trigger from three-to-seven pounds.   The MVP line of rifles chambered mostly for 5.56 and 7.62 accept the appropriate AR-15, AR-10, M1A/M14 style magazines.  Though that may not sound as applicable to the .204 chambering, our test MVP rifle included a 5.56 labeled steel magazine for firing the .204.  The latest 2017 rifles are now shipping with a polymer magazine rather than the earlier steel version, and the newest MVP’s are now threaded as well.  So if you’re in the market, best wait until the latest batch of guns begins to ship, as price varies by only a $20-$30.

The MVP 204 Varmint is available in multiple options.  The bare rifle we tested, including Weaver bases, carries an MSRP of $738.  A combo set including the rifle, a bipod, and a 4-16×50 unnamed-brand optic retails for $892.  And just debuted, the new MVP will also be offered in a Vortex Crossfire II 4-12×44 optic and bipod combo for $936 or just the new threaded-barrel rifle for $754. 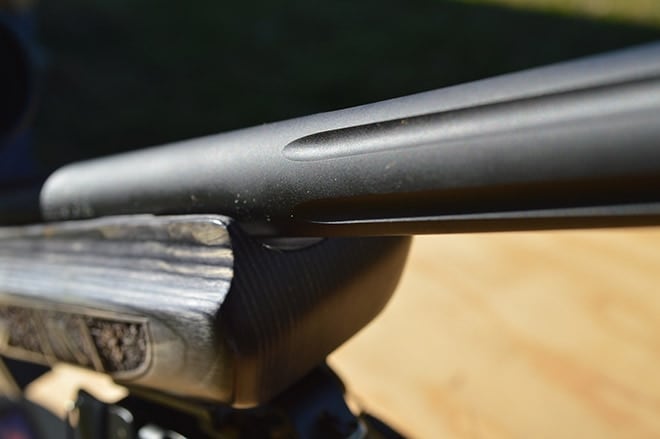 Our T&E rifle came as the bare rifle rather than the popular combo versions. With its included Weaver scope bases, we were able to quickly add an optic.  We chose the Vortex Viper HSLR 4-16×44.  The MVP’s smooth laminate stock is pillar bedded for exceptional accuracy.  For accuracy testing, we fired Hornady Superformance 32-grains, Nosler Varmageddon 32grn, Hornady V-Max 40-grains, and mix of reloads in varying bullet weights.  Shooting was done from the bench with both a Bulls Bag rest and bipod, as well as from the bipod sitting and prone.

The LBA trigger broke just over three pounds on a Lyman pull gauge right out of the box and was a pleasure to shoot.  Average five-shot 100-yard groups were 0.89 MOA.  Our best groups came with the lighter bullets, and the gun especially liked the Nosler rounds, shooting the best 5-shot group at 0.46 MOA.  Groups opened up with any 40-grain or heavier bullets, with an average of 1.05 inches and best cut of 0.75 MOA.  Even at 200 yards, accuracy was more than acceptable, with average three-shot 1.98 inch groups in a 12-15mph crosswind.  Long story short, the Mossberg MVP is a sub-MOA shooter all day, leaving the ultimate results up to the trigger puller. 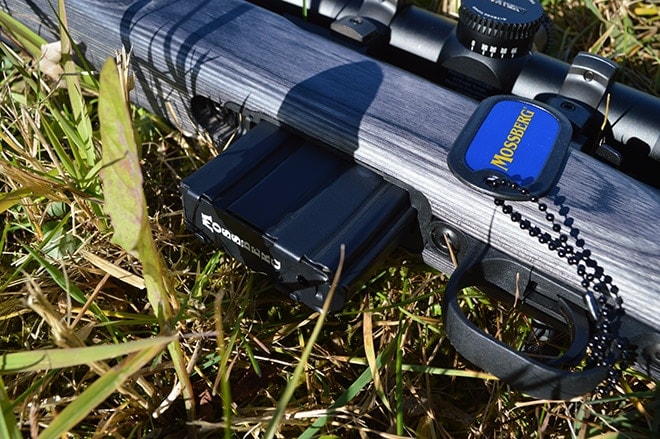 While Mossberg’s LBA trigger is fully adjustable, we did not find it necessary to make any changes.  The extended 10-round magazine is ideal in both offering plenty of rounds while not protruding far enough to affect bench resting.  The weakest spot of the design, though it performs just fine, is the magazine.  While it locks up tight and feeds with 100% reliability, the steel mag rattles as you move the gun around.  We are happy to see, however, that the new-for-2017 model features a polymer mag in place of the steel version, if for no other reason than the quiet of carrying and reloading for hunters.  The spiralized bolt is buttery smooth in the action, and the whole gun is very well finished.  The rubber butt pad is nice, but not necessary given that recoil is non-existent between the caliber and the weight of the rifle. 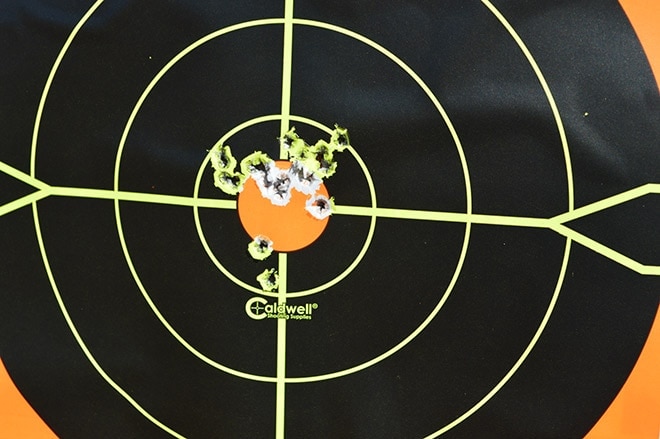 The MVP Varmint in .204 is ideal for prairie doggin’ or varmint hunting as the quarry remains centered in the scope after the shot.  A significant right-handed palm swell makes the gun sweet for right handers, but leaves out the left demographic.  Some will appreciate the muzzle’s gentle crown, but others would prefer it be completely recessed. We even took the MVP out on a crisp morning for coyotes, and though the dogs didn’t cooperate that day, we spent some time punching paper and kicking over targets instead.  The .204 and the MVP are just too fun of a combination not to shoot. 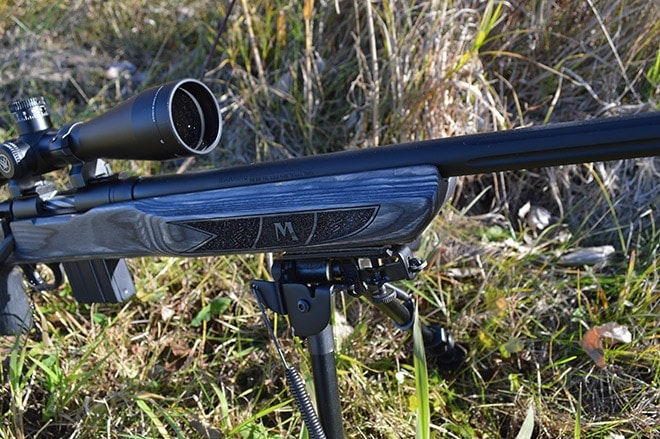 After spending time with Mossberg’s MVP in the field and on the range, I can safely say this rifle is the real deal.  With a fluted barrel, spiral bolt, adjustable trigger, and solid combo options, buyers get a lot of gun — and a lot of fun — for the money.  The gun performs from a bench or from a bipod and the message is simple: varmints beware.