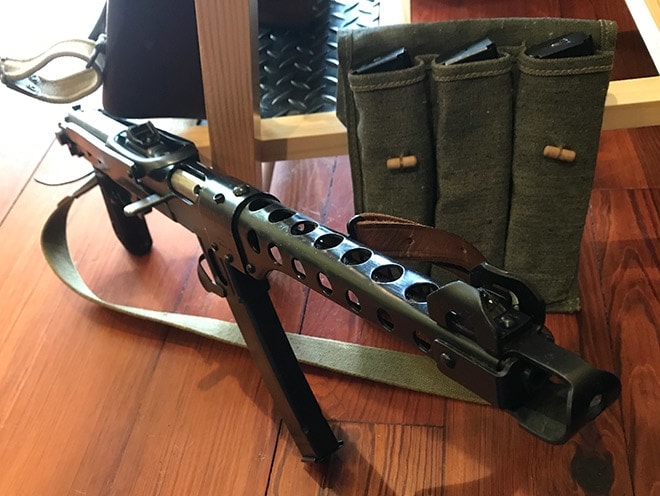 Intended for Soviet tank crews, mobile recon groups and paratroopers, the Soviet Union manufactured nearly 2 million of these submachine guns, designated PPS43, between 1943 and 1946.
Pioneer Arms of Poland redesigned this historical firearm to shoot from a closed bolt position as an ATF legal semi-automatic pistol with the folding stock permanently fixed in its closed position. (Photo: Hanson Holladay)

Most firearm enthusiasts — especially those with a particular interest in historical guns of 20th century warfare — are aware of the simplicity and reliability of the former Soviet Union’s weapons issued to its Red Army and other branches of service. The PPS-43 submachine gun is perhaps the finest example, designed and built during the Great Patriotic War, or, as we refer to it in the West, World War Two.

At first glance the weapon is quite hideous, its appearance somewhat similar to the firearms of stick figures drawn by children: a horizontal line with two angled extensions beneath representing the handle and magazine — pure, absolute simplicity.

Overall length is 24.2 inches with a 9.8 inch barrel. Weight comes in at 8.1 pounds with a loaded 35 round magazine. (Photo: Hanson Holladay)

It is important to note that the firearm in review is in fact the PPS-43C, which is a modern production of the PPS-43, built at the Pioneer Arms factory in Radom, Poland (Often referred to as the Radom Plant). Like the original, the modern production is designed to chamber the 7.62x25mm, or 7.62 Tokarev pistol cartridge.

Overall, the one major difference between the two — excluding, of course, that one is fully automatic and the other is not — is the permanently fixed folding metal stock on the PPS-43C, done so, of course, for legal purposes (Bureau of Alcohol, Tobacco, Firearms and Explosives approved pistol). This feature, unfortunately, greatly affects the accuracy of the firearm, due to the user having to hold the weapon out in order to aim with the use of both eyes, just as one commonly does with a pistol, rather than use the stock to press firmly into the shoulder. For the enthusiast with a common cartridge preference (normally available at equal price) Pioneer Arms produces a variant that chambers 9x19mm or 9mm Luger. 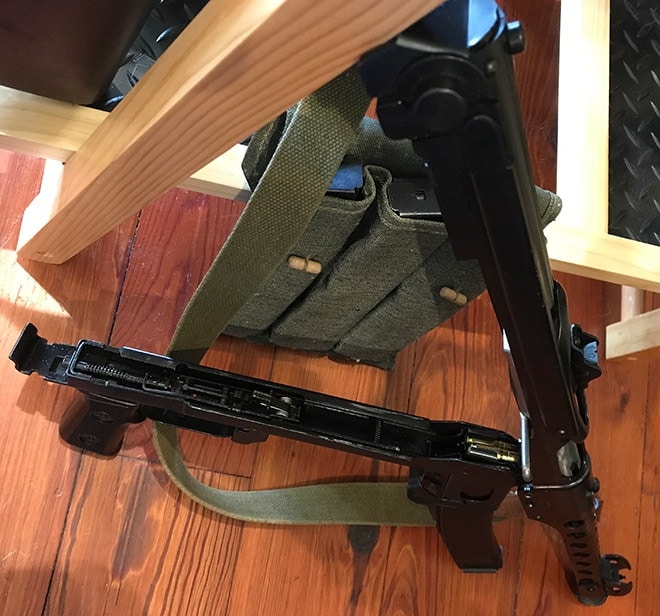 Lifting the upper receiver and accessing the internal parts is easily completed by manipulating a locking hatch on the rear of the gun. (Photo: Hanson Holladay)

As a collector of firearms from the Second World War and Cold War era (the PPS-43C being the one exception as a modern production) I personally own, and often shoot a PPS-43C, despite the somewhat rarity of the ammunition. In my experience with handguns, 10 to 15 yards is the ideal distance at the range. When aligning the front and rear sights at this distance the round’s impact is a few inches high, hitting directly above the aiming point. For example: at an indoor range, with a standard silhouette target no more than 30 feet in distance, if one were to align both sights with the throat, the impact would be just above, if not right between the eyes — the windage accurate, the elevation just a bit off.

This PPS-43C, like the original, is cut from — that is stamped out from — a solid piece of steel. In fact, the only non-metal parts of the firearm are the pistol grip coverings; the original were made of wood and the modern are made from plastic. The result is a solid, heavy gun. Because the weight is so great, especially with a fully loaded curved box magazine of 35 rounds (just over 8 pounds), the recoil is borderline non-existent. Although some will surely disagree, firing the 7.62 Tokarev cartridge through this particular firearm results in a “kick” similar to a run-of-the-mill .22 firearm. To cite another example, many have made similar claims with the Thompson submachine gun. The .45 caliber cartridge is extremely powerful with a lot of stopping power, but, because the Thompson is so heavy, the user doesn’t experience intense recoil. 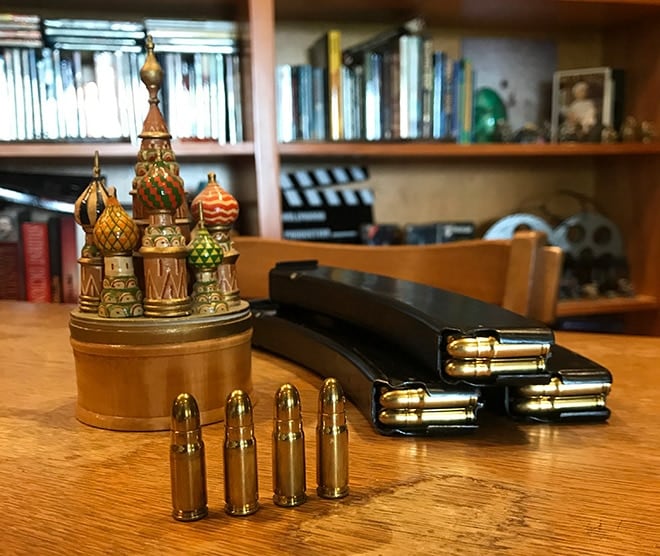 PPS-43C curved mags and 7.62 Tokarev rounds with a little Russian flair. These rounds produce minimal recoil when fired through the PPS-43C because of the weight. (Photo: Hanson Holladay)

At present (Summer 2017), the PPS-43C, in either 7.62 Tokarev or 9mm Luger, doesn’t appear to be readily available through trustworthy vendors, such as ClassicFirearms.com, but used models can be found in the $300-$600 range.

In my experience at the range, the PPS-43C does cause a few heads to turn, mostly due to its bizarre, unorthodox look. In my opinion, the firearm is so hideous that it is in fact beautiful though I admit that, because I am quite fond of Soviet guns, I am biased. With military firearms, intimidation, reliability and simplicity are the crucial ingredients, and the PPS-43 (as well as the modern PPS-43C descendent) is one of the finest examples, right alongside the famous/infamous Kalashnikov assault rifle.