Gun Review: Remington DM must have or major bust? (VIDEO)

The Remington 870 sits atop the list of the most popular, affordable, and bulletproof shotguns in the American arsenal.  Now users have options, as Remington pumps up a new 870 DM–detachable magazine–feed in place of the traditional tube-fed slide action.  Is this a case of “why didn’t they do this sooner?”  Or “why mess with a good thing?” Guns.com finds out.

What Sets the DM apart from a standard 870?

The first, and most important thing to note about the DM, is this is a redesign from the ground up.  Though many have asked, suggested, and attempted, there is no retrofitting existing tube-fed guns.  Right now, if you want a magazine fed 870, you must purchase a new gun.  The DM’s receiver is still made of steel, but the build is quite different with an aluminum magwell secured both fore and aft, with one crossbolt replacing the forward trigger pin.   What looks like the standard magazine tube beneath the barrel is now a shortened, empty guide for the forend action.  The remainder of the internals stay mostly the same as your granddaddy’s 870, with action bars, crossbolt safety, and single-piece trigger assembly. 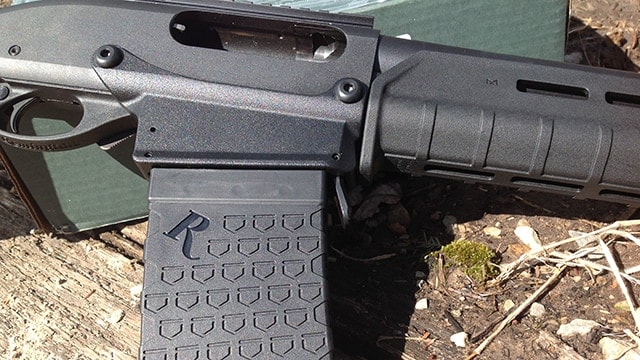 The new 870 DM is a ground-up design, not available at this time in any kind of retrofit. Here, you see the aluminum magazine well, which accepts the company’s single stack magazines. (Photo: Kristin Alberts/Guns.com)

While the redesign steals the show, most other features remain standard Remington issue.  The biggest positive to the new system, it seems, is the ability to interchange 870 barrels.  The matte blue finish looks and feels like a blend of true blue and rust-prone, lower-budget parkerizing found on the 870 Express.  Though the website advertises the DM’s to ship with one six round polymer magazine, ours was packed with two, which would be a major benefit.  In time, both three and ten rounders are also slated for availability.

This is not a trial run for Remington, the struggling company went all-in with six models launching simultaneously: 870 DM, DM Hardwood, DM Tactical, DM Magpul, DM Predator, and though it’s technically a non-shotgun shotgun, a DM Tac-14.  The base model is available in either synthetic or hardwood with a fixed cylinder choke, wearing an 18.5 barrel, weighing in at 7.5 pounds empty, with an affordable MSRP of $529.  All the others, meanwhile, offer Rem Choke interchangeability, XS Ghost Ring sights, and specialized furniture with MSRP’s starting at $799.

Our test gun is the more tactical/defense-minded Magpul edition of the DM which comes dressed with–you guessed it–Magpul stocks.  The SGA buttstock comes with spacers for adjusting LOP, an integral sling mount, all capped with a cushy Supercell recoil pad.  The Magpul MOE forend offers attachment points for accessories, but otherwise functions no better or worse than the oldest 870’s corncob front.

The Magpul model wears XS Ghost Ring sights, a significant improvement over the standard single front bead on a gun built for home defense and tactical use.  The quality metal rear sight is integrated into the picatinny rail, allowing room for other forward optics, while the ramped front XS white dot quickly acquires in low light, albeit not as well in snowy winter conditions.  Like most others in the new DM family, our Magpul model wears an 18.5” barrel threaded to accept Rem Chokes, and ships with one ported, breacher-style cylinder choke. 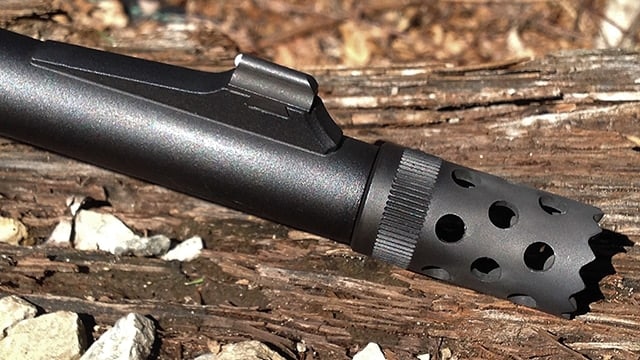 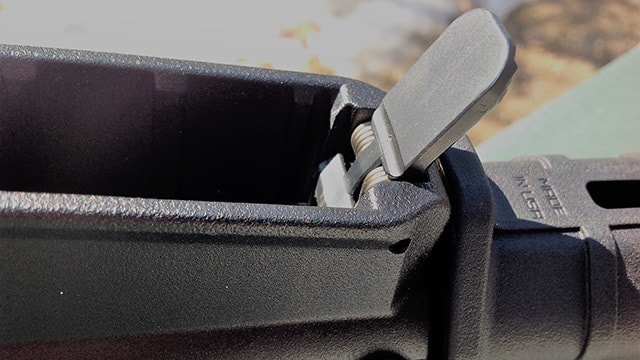 The flared magazine well makes quick mag changes a snap. We liked the easy, straight-in lockup rather than having to tilt the mag into place. The extended release is a nice feature, though mags do not drop free and must be forcibly pulled outward. (Photo: Kristin Alberts/Guns.com) 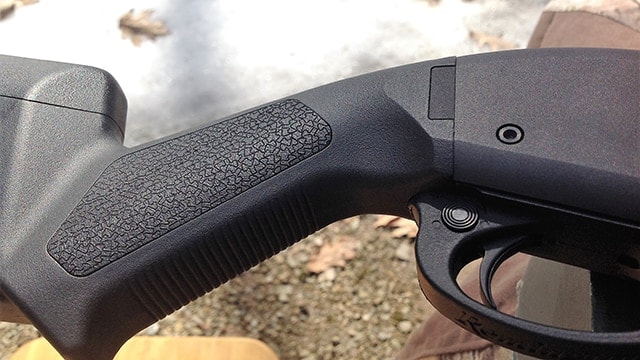 The black polymer of the Magpul furniture on our test gun flies under the radar, but little details like this grip area are a welcome addition while shooting. (Photo: Kristin Alberts/Guns.com)

An oversized mag release sits forward of the mag well, and is easily actuated with gloves or under pressure.  The mag does not drop free, but rather requires removal.  It is important to note that the magazine fits very snugly, and takes some practice and muscle to actuate, at least for the first couple dozen reloads.  We’re glad to see that it snaps definitively straight upward instead of requiring a tilt-in lockup.  With six rounds in the magazine, and one in the chamber, shooters gain slightly more firepower compared to a the “old” 870 which holds four in the tube and one in the pipe, though tube extensions are readily available, too. The single-stack magazine itself functioned well, with tight lock up, reliably feeding of both 2-3/4”and 3” rounds.

Our Magpul edition came packed in big green’s now standard heavy cardboard box. With an MSRP of $799, the Magpul version is at the top end of the specialized DM’s. With its Rem chokes and upgraded furniture, may be worthwhile if you’re in the market for a more tactical shotgun.

Though the DM will handle most any ammunition, our Magpul test gun with ghost ring sights and an 18.5” barrel is naturally limited in the birding or clays games.  Still, we shot through a variety of ammunition from Winchester AA 7.5’s to both 2.5 and 3” 00 Buck.  Though we expect 100% reliability from any pump, we were pleased that the redesigned mag-well feeding system worked exceptionally well. Our range days varied from 40 degrees above to -15 below.  We dared the gun to fail—at once firing 35 rounds as quickly as possible, buried the gun in the snow, let it freeze, pulled it out, and ran more.  It wouldn’t give up and Remington is happy to feed its own gun, as the Remington Ultimate Defense and Managed Recoil double-ought ammo is perfect for these home-defense-hearted scatterguns. 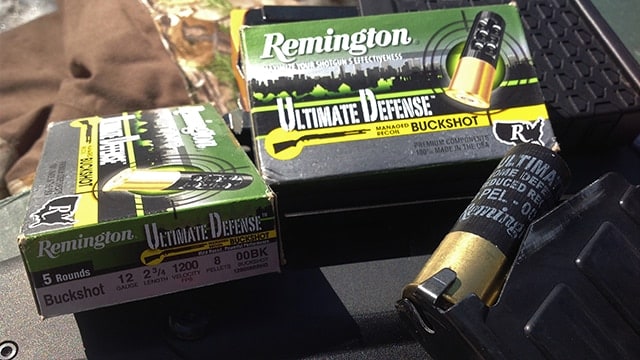 Remington knows how to feed their firearms. Though we fired a mix of Winchester and Hornady as well, Remington Ultimate Defense in standard and Managed Recoil 00 Buck are perfect for the Magpul DM. (Photo: Kristin Alberts/Guns.com) 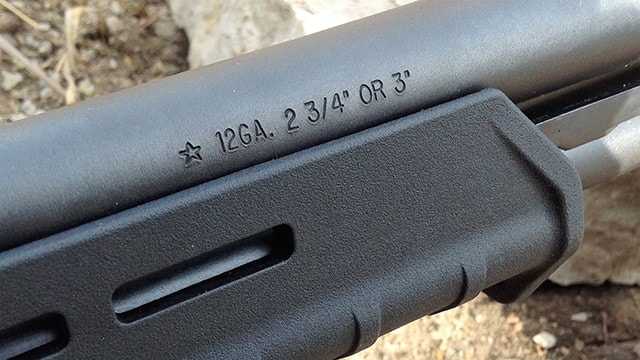 The 870 DM’s accept 2-3/4” and 3” only. If that’s a deal breaker for those preferring heavy 3.5” rounds, best look elsewhere right now, though there are more than enough 3” options on the market. (Photo: Kristin Alberts/Guns.com)

The gun balances well with its shorter barrel and tactical furniture.  Accuracy is naturally limited to closer-quarters, given the single included cylinder choke; though, as the Magpul model is threaded for Rem chokes, buyers could—and probably should—invest in a few extra tubes.  The action was as smooth as any utilitarian pump, and the inclusion of multiple stock spacers allows shooters to customize the comfort of the DM, meaning the throw was easy even for someone like me with a shorter wingspan.  Trigger pull is nothing to write home about, neither good nor bad, and just plain gets the job done.

It is no great secret that the Remington quality of decades ago is not what it used to be.  Thus, it was with great skepticism that we took up the DM.  The build feels solid and held up to quite rigorous use in less-than-ideal windy, frigid, wet conditions.  How it would fare over the long haul is quite another, and for that, only time will tell.

The idea of magazine fed shotguns, though touted by Remington with great horn-tooting and songs of angels, is in fact neither new or ground-breaking.  Detachable magazine bolt action shotguns were a cheap staple decades ago, but eventually fell out of favor.  With missing magazines and cracked stocks, those same guns are now a dime a dozen. More to the current point, however, magazine-fed pumps and adaptations have been around for more than a few years from companies like Adaptive Tactical, whose Venom kit turns any existing Mossberg 500 into a mag fed weapon or Black Ace Tactical generating custom mag fed shotguns.

Furthermore, Mossberg wasted little time in nipping at the heels of Remington with their own magazine-fed shotgun.  The Mossberg 590M accomplishes the same work, but with higher-capacity, double-stack magazines. 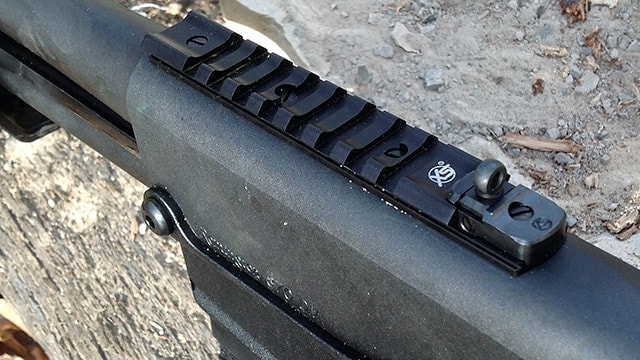 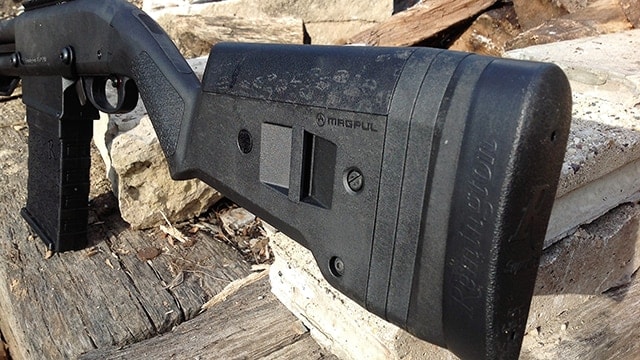 The Magpul SGA buttstock with spacers for LOP and a cushy Supercell pad make the gun comfortable and customizable. (Photo: Kristin Alberts/Guns.com)

One plus of magazine over tube-fed guns in general is the ability to safely use most any style of ammunition without worry of either damaging projectiles or worse.  That doesn’t mean as much to the DM as it does, to say, rifles firing ballistic or pointed tips, but this gun is built for slugs, buck and defense rounds.  Best of all, it’s easy to have one mag loaded up with slugs and another with buck or birdshot, making changing ammo as easy as a mag swap.

Benefits aside however, a large, protruding magazine does not make for a svelte birding shotgun, clays buster, or ultra-maneuverable defense weapon.  In considering the DM for something like a turkey hunt, I found even the six round single stack magazine to be too cumbersome.  Where the DM may excel, however, is on the competition market like where rapid reloads are the norm.  There’s little doubt that the majority of shooters can swap an empty mag for a full one in less time than they can fill the tube.

Our Magpul edition DM is a well-built, purpose-driven shotgun and quite simply does its job.  The Predator would make a durable turkey or hog slayer as well, if the style fits your needs.  An MSRP of $799 is a tough sell for any pump gun, no matter how cool, though we have yet to see real world price adjustments.  No word on cost or availability of extra mags at this time, though aftermarket companies are sure to jump into the fray.

At the end of the day—and a number of range days–I’m just not as gaga about the DM as others seem to be.  It is plenty reliable, capable, and enjoyable enough to shoot but just not as natural, feeling somewhat clunky with the magazine protruding below, and priced significantly higher than its tube-fed counterparts.  If your shooting style benefits from quick mag changes, if you bleed green, or just want something different, then certainly there’s a DM version for you.  Until then, I’ll be here bemoaning the sweet bygone hey-days of Big Green’s lore when the company set the standard for American made rifles and shotguns.